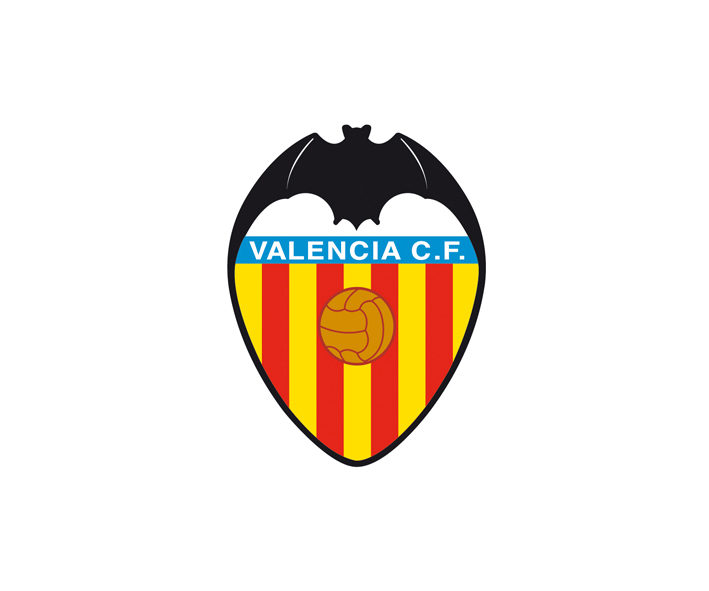 Return of The Bats

First game of the season is over and we won 1-0 against Alaves, not the greatest of scores but a win is a win and 3 points are 3 points! We had plenty of possession but Alaves kept fouling us so we were unable to play our game, we hit the post twice! Parejo had a strange game. He heard Liverpool are interested in him so that may have distracted him from his football. Our goal came through Alaves poor defending, Walter Gonzalez, who I chose to start ahead of Zaza pounced on Ruben Duarte’s mistake and crossed low into the box for Goncalo Guedes to tap in bottom left scoring, on his debut, Jelson Murillo got man of the match, he sniffed out everything that came into our own half and almost scoring himself. The next game is against Eibar – away… hopefully we can pick up another 3 points.

Eibar game over and done with! What a win! A very poor performance in the first half, being down within first 20 mins due to Dani Parejo switching off.

Before the lads were even allowed on the pitch in the 2nd half, I laid the law down there and then, we do not switch off in our own area and the first few performances will cement their place in the starting line up so anyone who thinks it’s OK to let the team down will be left in the dressing room cleaning everyone’s boots, I subbed off Zaza who had a very poor game, was marked out the game by Eibar, Walter took his place, subbed Guedes for Orrellana & changed our formation to 4-2-3-1 counter, 62nd minute comes and Orellana dribbles past his man, crosses low in to the box, Walter makes it 1-1 with a “deftly executed finish from close range” 10 mins later, Dani Parejo makes up for his mistake and scores a free kick in the top corner outside the area, the fans get louder and players are now pumped up! I do a cartwheel and punch the air! 86 mins, we are awarded a penalty, thanks to Pedro Leon tripping Walter Gonzalez in the box, Dani Parejo converted from the spot making it 3-1! Very proud of my lads and proud of Dani for getting his act together! Now we prepare for the game against Espanyol (home) who have lost both of their games into the season.


The transfer window is due to close, I feel I don’t need to add to the squad but if my DOF does then so be it but I will check before finalising any deals, no one has come in to bid for my players either which is good as we can concentrate on our football.

Receive an email from Aina Ezquerro (press officer), she sends me a JPEG of the La Liga, team of the week and I see that Dani Parejo has made it! I will print this off and laminate it so I can put it on my fridge like a proud father.

Board update, transfer window closed. Board think they know more about finances then me? Maybe I should tell them to suck my toe? But I won’t because I need this job to provide for my family. 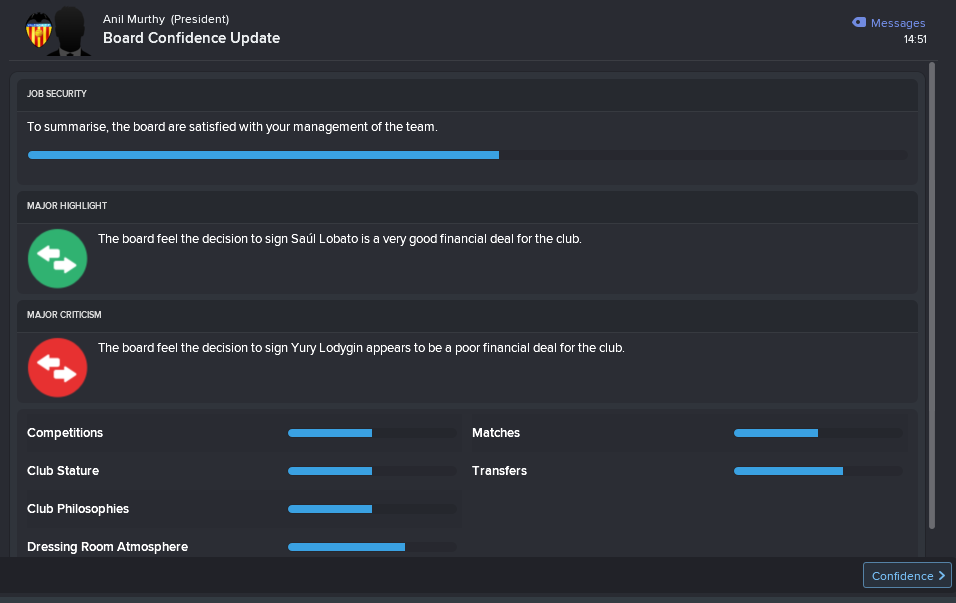 Squad update
:
Nice to see they already like me, the thought of cleaning other player’s boots must have really done the trick!

Espanyol decided to park the bus against us, we had a lot of possession in the first half (66%) 9 shots and 2 on target which is pretty poor, 32 mins in and we forced Espanyol’s keeper to make a save, before Walter could pounce on the rebound the defence cleared the ball, Kondogbia had his shot blocked and Parejo blazed a shot over…. There wasn’t any end product! Team talk wasn’t going to be ripping into them, but I will tell them calmly that I am not impressed and they need to much better than they have been showing…

2nd half starts and Guedes aims a shot at the corner flag – this is going to be a long night ahead, 62 mins in, it’s time to bring on the new kid Raphinha, which didn’t help, game ended in a 0-0 draw and I wasn’t happy and made the lads know, 62% possession and no goals… 18 shots and 7 on target, did my strikers get bladdered before the game!? Shocking… still a draw is better than a loss at the end of the day, now we prepare for our next few games against Villarreal, Real Betis, Leganes, Sevilla & Levante at this moment in time, I feel it is going to be a lot harder than I thought taking Valencia forward.

Results so far
:
We have had very mixed results using 4-2-3-1 & 4-1-3-2, we have all of the possession but not enough on the end of it, we can get the ball in the box but my strikers can’t get anything on target unless it is in 5 yards in front…I opted to go with a 4-4-2 but having a really high line, closing everything down, when attacking it is 4-2-4; I used it against Leganes and we won 2-0! Good start for the tactic, and then again against Levante which earned the 4-1 win and got Zaza finally scoring… 2-2 draw thanks to Murillo sleeping which seems to be the regular theme going into games at the moment! The game against Atletico, the media predicted them to walk all over us, we took the game to them, we couldn’t get past the world class Oblak until the 86th minute when Zaza was tripped by Godin and Ezquiel Garay converted to make it 1-1!

We are on target at the moment after 10 games sitting at 5th place, early days yet and hopefully results will get better, the performance against Atletico proved that we can battle with the best in the league! 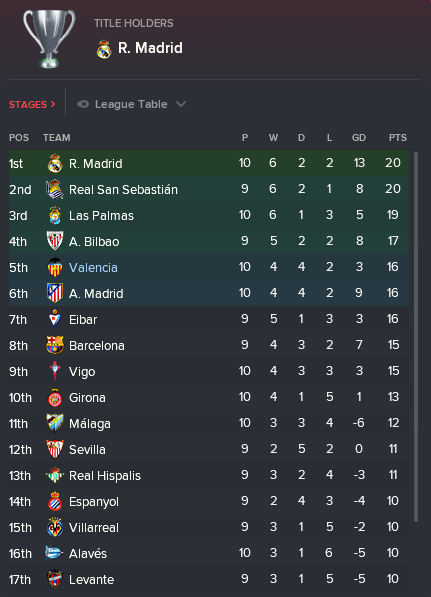 Chapter 3 will be on it's way! Hope you enjoyed reading this.

You are reading "Return of The Bats (Chapter 2)".