First of all, I’m from Belgium. There is a slight chance there will be some errors, as my native language is Dutch. Any feedback is much appreciated!

Let’s get into it. I very much enjoy reading about managing United, Arsenal, Barcelona, and so on or bringing back glory to mythical clubs. However I picked a club which hasn’t seen very much glory, nor in its past or recent history. I picked a cult club, a club whose supporters aren’t glory hunters, but give their blood (literally) to their club. Who put in thousands of man hours to rebuild the stadium. Supporters who go to their ground to sing Christmas carols together. A stadium where supporters chant: ‘Scheisse, wir steigen auf!’ (Shit, we are going up), because all they really want is to keep their identity, rather than spending the big money and become just a club like many others. Oh and they just have an absolutely fabulous club hymn.

I’m talking about Union Berlin, which is in Berlin. I’m sure you heard of it somehow, the area around it goes by the name Germany. The club’s nickname is Die Eisern referring to the iron industry back in the day. Last year they celebrated their 50th birthday, founded in 1966. The club sits in the second division and never reached the first division. As silverware goes, there isn’t much. One cup back in the days of the Cold War and several regional titles.

Over the series, I will tell you more about the club. But for now, it’s time to face the present reality (yeah yeah I know, the virtual one).
I’m going to set some objectives, so I can keep track of my progress and you can remind me how (awful) I’m doing.

First day at the job: the board expect a top half finish, but the media thinks we’re challenging for the promotion spot. Which of the two is the realistic one? Let’s take a look at our squad

Our strengths lie in the midfield. Felix Kroos (brother of) and Kreilach are going to be the cement of the team. I have a special plan for Skryzibski and Hosiner is our best striker. Club furniture Polter is the second striker but he is getting old (and grumpy). We don’t really have a left flank and our defence is quite modest. Tony Leistner will be the leader of the bunch at the back. We have one really exciting young attacking midfielder, Hartel. Three star ability, potential five stars. And German too!

One of the objectives is to get some youth into the team, maybe there already is an exciting hot prospect knocking on the door of the big men’s dressing room.

So we need to strengthen our squad if we want to live up to the media’s expectations. Unfortunately there is only 170K available and I’m already above the wage budget. So the plan is to get rid of the deadwood. Only 55% of the transfer revenue is available so loan players it is.

About the facilities then. Our stadium (An der Alten Försterei) is in a very good condition so no need for immediate worry. It can host 21 717 supporters which is very good to start with. The cool thing is: only 3000 seated places. But so far for the good news as you can see… I did manage to convince the board to upgrade our youth recruitment. Babysteps.

I’ve introduced myself to the squad, mentioning that a top half finish is in our abilities. Luckily they all agree. Though secretly I’m thinking of a promotion. Our financial projection is terrifying so the TV-money would come in quite handy.
I need to convert my transfer budget into the wage budget, so at least those red numbers disappear.

With no money remaining, it’s time to look at players available for loan. I’m scouting the youth teams of the big clubs, see who is available. I get a very exciting defensive midfielder, Atakan Akkaynak. And since I see Eddy Nketiah’s name all over the interwebs, let’s get him too. I hope the 2. Bundesliga is a perfect environment for them to be regulars. There are no options to buy, but I’ll see what I can do at the end of the season. Diamanti is a free agent and I could convince him to be a supersub for the attacking midfielder role.

Now: a tactic. This for me is the hardest part. I’m still getting to grips with the player roles, previous editions I didn’t pay much attention to that. I want my team to be dominant in possession. I want to make my adversary’s dizzy. A high defensive line, high pressing and we don’t want to give the opponent much rest. But how am I going to do that. The thing I didn’t address in the transfer period is my lack of pacy defenders.

The only thing I know for sure: I’m going to play a raumdeuter. It’s a brilliant role (and name) and we are in Germany after all. The man for the job is Steven Skrzybski, 3,5 star ability and 4 star potential, supposed to be one of the pillars of the club.

The friendlies are coming up, my first home game as the reign of Union Berlin! For the first time I can see my boys in action. The whistle goes, anxiously I’m looking at the stadium clock. 17th minute… 18th minute… 19th minute! Phew, the game is still going on!

Maybe my relief does need some explanation. I know the club for 4 years now, reading about them in my sport magazine. I was immediately intrigued, followed them online and read about them. Last august, I went on holiday to Berlin. I convinced my girlfriend to go visit the stadium with me. It took some convincing and promises but off we went. Luckily there was a friendly against QPR so we actually got to see a real match and breath the atmosphere! That is, until the 18th minute. There was a terrifying thunderstorm and the pitch clogged up. Match postponed until the day after, at the exact moment we had to board the plane…

No rain clouds spotted now though and we win the first game. We lose 2 friendlies and win 4, the raumdeuter seems to work but my defenders aren’t yet used to my high pressing. A bit stubborn I stick with my instructions and we kick off the 2. Bundesliga with a defeat at Darmstadt. But raumdeuter Skrzybski scores and does so in the next match, which we win.

For the second time this season, the nerves are there. First game in the German Pokal and we really need a good cup run accompanied with the TV and price money. Supersub Diamanti scores in the extra time against Karlsruhe, good enough. Two losses in a row against fairly good teams, we go on a three winning streak. A draw against Bielefeld is really disappointing and our tenth game against leaders Heidenheim we lose.

Ten games played, we are 8th. Only 6 points of the leader but I’m still not sure if my tactic is the right one. After 2 draws and 2 losses I need to make some adaptions. The final game which convinced it needs change is sadly my second Pokal match against Borussia Monchengladbach, you know ‘A German team’. I was torn at the draw: a team which brings good revenue, but possibly a bit too good for my modest club. Hugely disappointed and staring at the horrible projection of the club’s finances, I hit the save & exit button. It took me two days to face the harsh reality and get back to work.

Alright, back at the office, ready for a fresh start. Let’s have a look at my inbox. Oh you gotta be kidding me… 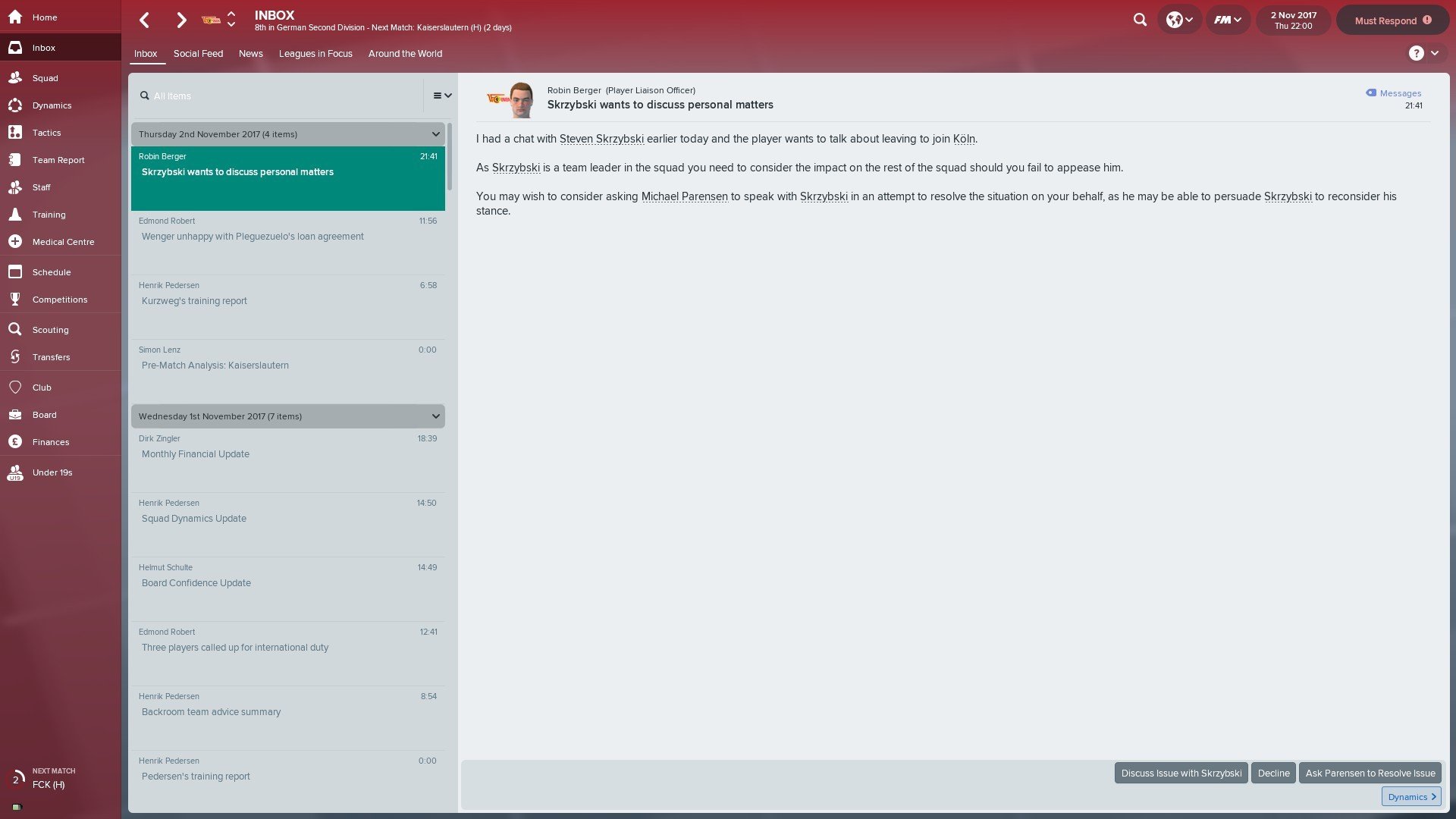 Crisis adverted, I summon my coaching staff, get us some biscuits and lock them up in the room with me. We need to revisit the tactic plan and are in need of fresh ideas. Their suggestions aren’t great, that’s maybe why we aren’t paying them much. Luckilly, I still remember the beating I took at the Copa Manageria at SI in London, against Guido Merry, the founder of Strikerless.com. I decided to have a go at it and hopefully steal his mojo. 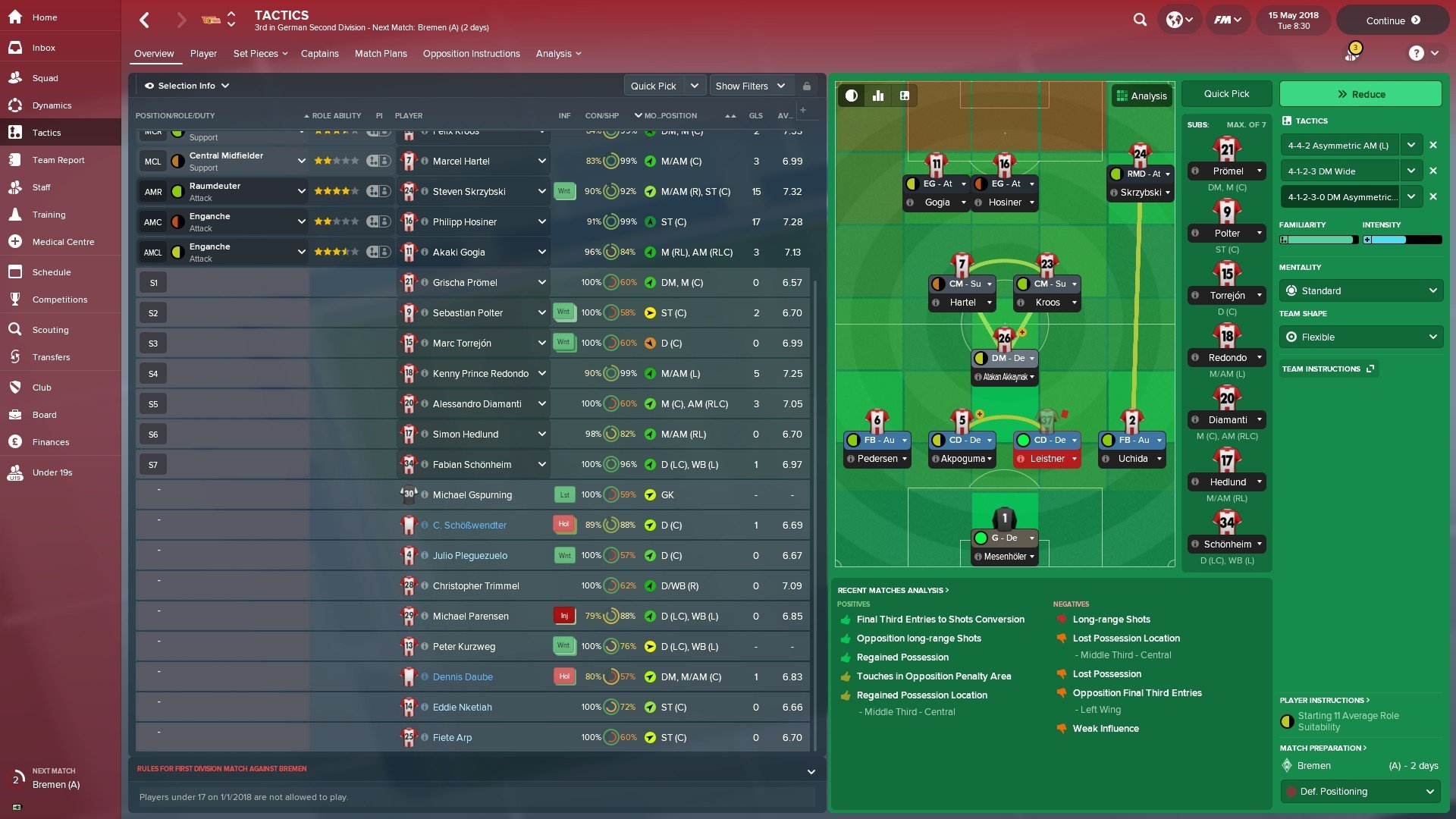 First game, we set a 0-1 straight in the second half and win 5-2. A difficult game against Kaiserslautern is also in our advantage but then we lose 2 times in a row. Two more wins and one draw with 92th minute equalisers, the first half of the season is over.

Honestly, I’m not really convinced of my promotion chances. In 5 months I never was in a promotion spot, circulating at the 4-7th place. Nketiah isn’t developing fast enough and I can’t use a poacher in my tactic. Diamanti wasn’t much of use in the last two months but Akkaynak really is a fantastic prospect. I need to find a pacy defender but it’s going to be a loanee. There is no money and the players I want to sell aren’t going to bring in the big money. Certainly not when the board decides to reduce my transfer revenue to 35%...

I locked myself up in the office, alone. My staff members aren’t much of help and they seem distracted anyway. I hear groups of them practicing some songs, others are tuning instruments and others are baking cookies. As if that isn’t enough of a distraction, I hear some builders outside. I take a look outside my window and hardly recognise my pitch anymore… 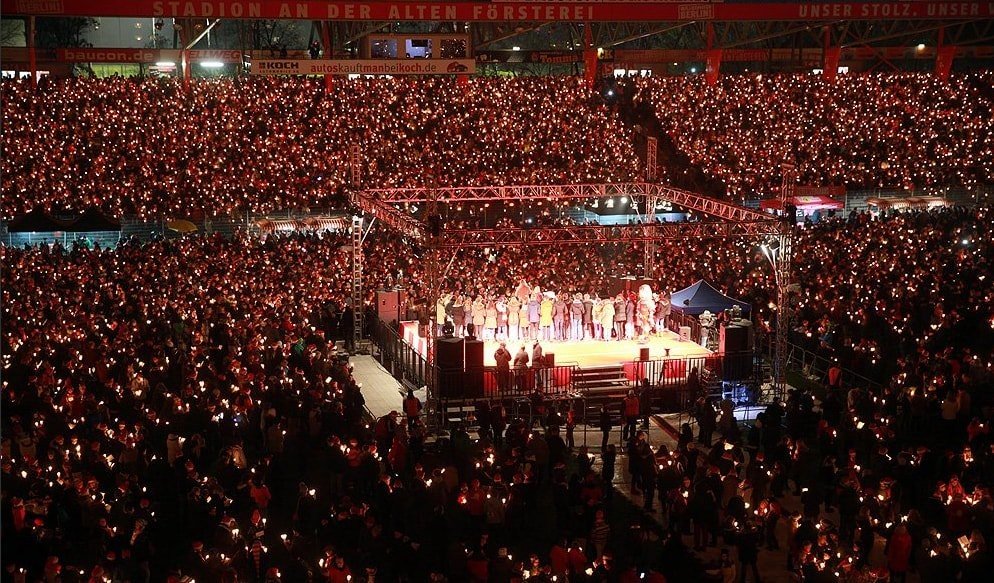 You are reading "Die Eisernen".