preezyldn
2 years
Transfers In: When I looked at my squad I saw 5 positions that needed strengthening. CB, LB, CM, CAM and ST.

I had a couple players in mind for the CB position: Laporte, Rugani and Barzagli. I decided to go for Rugani as he is young and will fit perfectly into the team and will develop over the seasons. I signed him for £25m but the transfer fee may increase to £40m and in my opinion I think that the fee I payed wasn't expensive as I am sure he will be the best defender in the league in years to come.

LB was another position that I had to strengthen as only Alonso could play there and I wasn't keen on Azpilicueta playing there as I wanted to use him as my first choice right back. I had 3 targets in mind: Aaron, Jose Gaya and Alex Sandro. I decided to sign Aarons, as he was the cheapest option, however Espanyol didn't want to let him go and after a series of negotiations I decided to trigger his release clause signing him for £22.5m

In real life CM is a position Chelsea needs to strengthen. After the departure of Matic, and the ageing of Fabregas, I had to buy another CM, someone who is a top player and can be developed in seasons to come. I didn't have many targets in mind, but then I saw Andre Gomes was on the transfer list for Barcelona and funnily enough he only cost me £7.5m, now I am happy with that as I thought I had to bid over £30m in order to sign him.

CAM was the easiest to sign, and I didn't even have to go searching. Now every time I start a career in career mode. I always look at every premier league team and the squad they have. Arsenal being top due to alphabetical order. I noticed that Ozil was on the transfer list and I didn't even hesitate to sign him.He cost me £30m which may increase to £36m.

With only Morata and Batshuayi as my Strikers, I wanted to recall Abraham from loan but I wasn't able to do that. I also wanted to re-sign eto'o, but I wanted someone who was young and can be developed alongside Abraham and Redan. I decided to sign Moussa Dembele from Celtic. I signed him for £10m which can increase to £19m. I think he alongside Rugani will develop into a world class player.

There was only one player who I had to sell and that is David Luiz. I know a lot of you may disagree with me but it was either him or cahill, and I wanted to keep the englishman, He was signed my Monaco for £23.5m


Moses was another player I wanted to sell, but no clubs made a bid for him, So I decided to train him as a right back until a club comes for him or until he decides to leave. 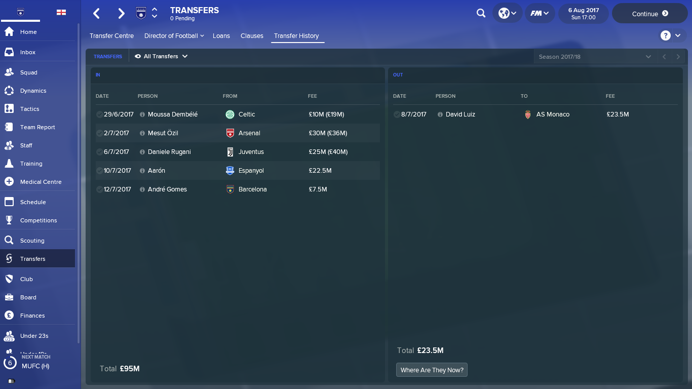