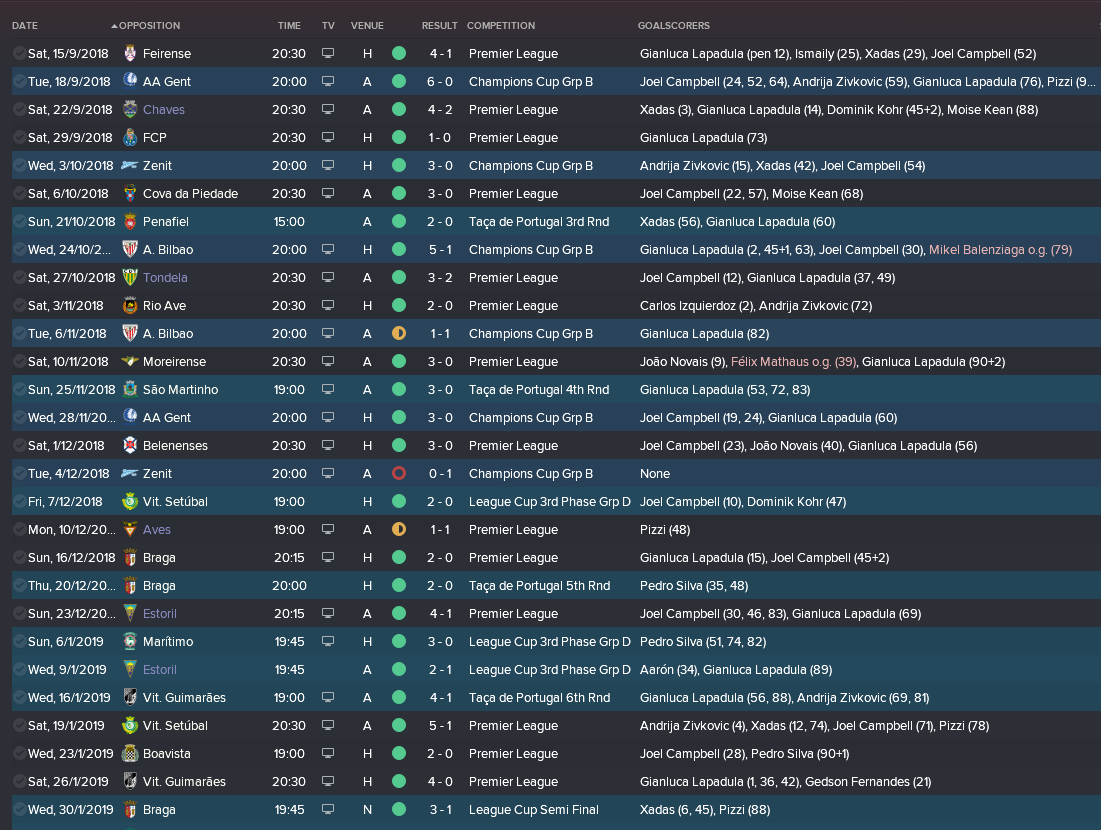 Aaron
1 year
I have never been sacked on FM18.
Login to Quote 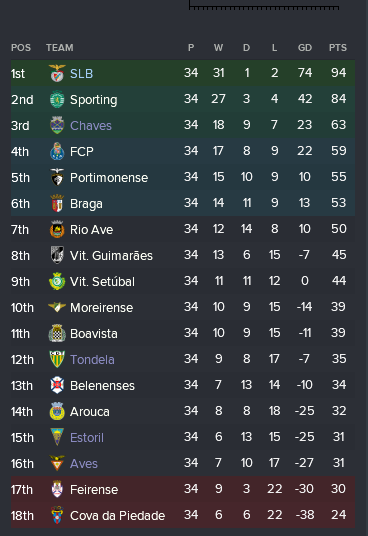 Very strong showing from Benfica in the league there, winning the league with a double digit margin whilst scoring 32 goals more than 2nd place Lisbon and having the joint best defensive record.

Gianluca Lapadula finished the season with a staggering 53 goals in 52 appearances, 29 of the coming in the Premier League, 10 more than 2nd place Bas Dost.

Andrija Zivkovic lead the way in terms of assists, racking up an incredible 26 assists in 44 appearances also netting 9 goals in the process.

Joel Campbell was a signing that was questioned at the time but he put any doubt of his ability to bed after having a hand in 43 goals during his first season in Portugal.

Benfica were leading 5-0 up until the 91th minute when Koke equalized for Madrid, extra time started and103 minutes in Lapadula fires in the winning goal with a trademark finish from inside the 18 yard box to complete what is surely one of the greatest comebacks in football history.

90 minutes couldn't separate these the two sides, the first half of extra time passes with nothing of note happening really, the 2nd half kicked off and again it was a pretty poor game of football. It looked like it was going to penalties... step up, Gianluca Lapadula, the main man bags his 53rd goal of the season in the 120th minute...

SL Benfica are the Champions of Europe, winners of their domestic league and cup respectively, treble winners, what a season and what a club, astonishing.

ScottT
1 year
Class way to win it, against the team you support.


I know this challenge hasn't quite been completed as we didn't win the World Cup with Portugal however we did win the European Cup, the main reason behind this save, I did not expect us to complete this in season two, I expected it to take 5/6 at least, it's been incredibly fun and I'll definitely be working on some more stories in the future. I know its quite meh but this is my first story and I'll get better at them in the future, hope you all enjoyed, cheers

ScottT
1 year
<3 Loved it Hazza, looking forward to the next story you write.
Login to Quote

Aaron
1 year
Loved it mate, especially the ending. Can't wait to see where you go next, another good one from you I expect

You are reading "Project Portugal".