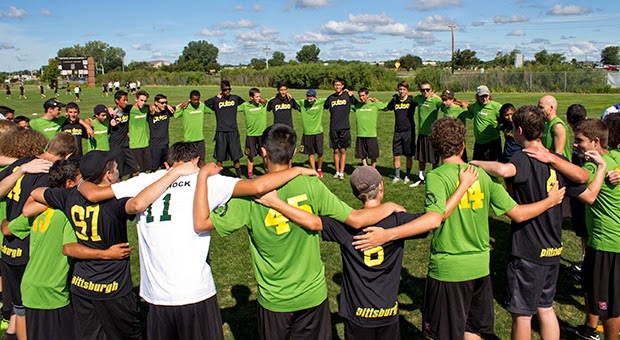 The aim of this save is relatively simple by nature; to try and take my own and my friend's local favourites to the Premier League, starting from the lowest. The challenge will then be to take them to the Champions League trophy and then start at the next lowest/next available job!

Did I mention we all have as small of a chance of success as it comes in football? No? Well here are the teams:

Quite nicely for me, in FM18 Leyton Orient are alone in the Conference from the teams I have to choose from and thus they are the first to get the "Burd treatment" - yet to be confirmed as a good or bad thing. I've not managed a team from the depths of English football to the top before so this will be quite the new experience for me and may well end poorly, though I am relatively happy that we can go up to League Two in the first season with the strength of the playing team.

Possibly the toughest challenge I've taken on and one which will see me yo-yo between divisions and teams. Whether I can get one, let alone 8, to the Champions League title will be interesting and I'm incredibly excited to get started. I'll be posting half seasonal updates every season, so without further ado let the games begin!

ActuallyMike
2 years
Really like this idea, looking forward to seeing this story unfold!
1
Login to Quote Our business in the transfer window was somewhat limited by our poor budget but I had the utmost confidence that our squad was good enough to go up with. Later additions such as Ismael Miller were brought in to ensure that we had reasonable backup to the first team with Cups as well as the league sneaking their way into our fixtures. A top notch start to the season where we seemed absolutely unbeatable. I had some concerns just before the loss considering we had conceded 4 in 2, a feat unheard of previously, and sure enough Macclesfield took advantage. Our cup run sees us at home against Fulham in the 3rd Round, a feat I'm very happy with and one which I hope we can cause an upset in, though the finances are already smiling gently at the results we have previously inflicted. Halfway into the season and the gap seems to be growing as we look to shift up a gear. 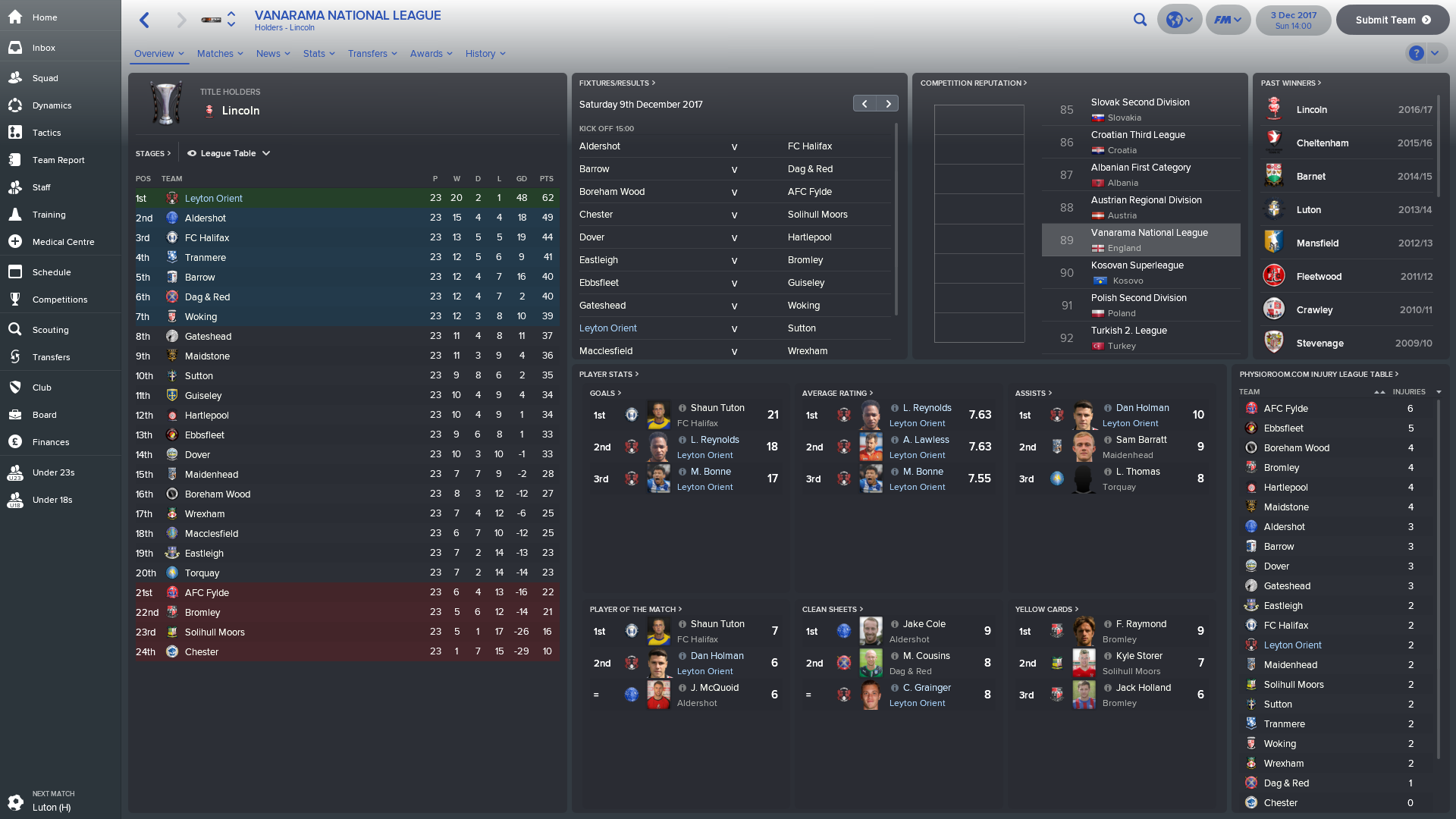 What a start to non-league life as we hold a 13 point advantage halfway through the season, failing on only 3 occasions to come away with all 3 points so far. Our defence has looked solid and our strategy using 3 strikers has definitely performed with more and more goals every month it would seem.

So far in the league I'm very happy with our playstyle and the results, something I've found seldom in the last few FMs. We've been playing a good style of football and have looked clinical in all but 2 games. What's more, our defence has been stunning and we seem to have a real knack of keeping clean sheets so far. I'm not getting ahead of myself, but I think we will go up, and I'm already trying to consider what the team will be like for next year, and accommodating room in our budget by trying to pull away a few members of the team that hardly serve as a rotation, though this seems to be less fruitful than a plum tree in winter. Nevertheless, I'll continue to disgruntle the "right" members of the squad to try and get them out of my (receding) hair and onto another club's wage bill. The Orient Express is now leaving "Conference Station", next stop League 2. Full steam ahead!

ScottT
2 years
Brilliant start mate. Love the concept of this save and I'll be following with interest.
1
Login to Quote

Justice
2 years
Is it a bird? Is it a plane? Oh wait, its a Burd! Good lick
1
Login to Quote We certainly continued our run of form from the first half of the season! We were scoring for fun, keeping clean sheets like we were a hotel chain and the champagne was on ice from January when it already seemed written in the stars that we were to progress to league football immediately. 1 league defeat and 4 draws; 3 of those (and the loss) coming around the time we wrapped up the title - slightly disappointing that we took our foot off the gas or our points tally could have been even more crazy! All in all however, I am delighted with the result of the season and our record was amazing the whole season long, including a nice FA Cup run. What a season it has been then, we stormed the Conference with a ridiculous amount of points, goals and fun! By January we were already racking up records, tearing it up page by page, and now face the endeavour of League football once more! I find it almost a shame Halifax didn't come up with us - I'm always looking for the fairytale team in my saves but it just wasn't their season as Aldershot will join us instead via the playoffs. We got a nice shiny new contract as a reward for our fine managerial display this year though the board were adamant that it would only be for an extra season on top of my current deal. Hopefully we can show them exactly why we deserve a longer deal.

To summarise though - "What a season!". We flew with the advantage we built up in the first half of the season and never looked back. By mid-term it seemed an innevitability that we'd be jumping straight back up into league football, but to maintain such an emphatic triumph in the league was incredible - one of the first times I've run away with the league to such an extent in my 10 year FM tenure. Next year we'll be looking to build on our successes - I've been given a small budget though the finances are looking a little bit shaky - and try and reach mid-table or maybe even see if we can sneak into play-off contention. I'm not unrealistic with my goals or I'd say "if we can storm this league we'll storm the next" as it also depends on the quality of players that we can bring in.

Our player of the season was loanee Dan Holman whose contract runs out at the end of the season so we will be looking to pounce on that and make a deal with the striker who caused havoc among defences in non-league football.

A little bit for interested parties; the higher English leagues. Surprisingly, for such an array of teams that I am yet to manage (see first post), only 1 of the 8 have moved division for next season, besides ourselves, with Sunderland being relegated down into League 1 after a disappointing season in the Championship. I'd like a team to go down to non-league football by the time we're romping the Champions League with Orient, I can only imagine the headlines if I can manage to go from Champions League meetings with Real, Juve and Barcelona to Weston-Super-Mare, Whitehawk and Gainsborough. Alas, that dream is still a while away yet! ScottT
2 years
Absolute barnstormer of a season there mate. Congratulations on promotion! Orient are a side that weren't too far away from the Championship a few years ago, so the building blocks are there for you.
Login to Quote

ActuallyMike
2 years
What a season....FOR CHELSEA! Haha I'm kidding, you absolutely flew through the league, looking forward to see how you get on in the actual Football League!
Login to Quote With league football awaiting it was time to delve into the transfer market and I have to give myself credit where it's due; we made a couple of cracking signings for League Two! Dan Holman was an obvious choice to come into the team on a free transfer - his goals and assists earned himself the Player of the Year both league-wide and for the club. Greg Olley is a lad of obvious potential that I really hope can stay for a few seasons (despite his immediate despair at the lack of improvements - still not sure why) and youngsters such as Beadling, Moore and Whiteman all could be featuring regularly this season into next! A choppy start to the season - we don't seem to enjoy the clusters of fixtures that get thrown at us and I'm starting to wonder if that's why we fell to a simmer towards the end of the last campaign. The Checkatrade saw us progress and even hit 6 past Watford's youth team. To end the first half of the season in the lead-up to Christmas congestion we seemed like a top team again, just in a different league this time with Bonne and Holman both performing excellently for us. A couple of younger players are also starting to come through up front for us with Kai Dynan (a youth intake from last year) and Charles Clayden (18 - real player) both being rotated in and out of the squad; both with potential up to their ears and over! It seems that we have adjusted pretty darn well to life in the bigger league with a surge in form towards the end pulling us 5 clear of Cambridge in 2nd. Furthermore, you can see the goals being pumped in and Bonne, a Zimbabwe international, hasn't even played every game due to international commitments. We're clearly enjoying aspects in front of the goal, but also in our defence as well, holding a 25 goal difference at 23 games.

A top start to life in League Two and I certainly hope that we can continue this run of form. Whether we're ready for League One remains to be seen, but if we can come out of this season with our heads held high knowing that we gave our all to be there I'll be happy. I'm expecting a relative drop in form at this point as we seem to have been overachieving to some degree but the drop in form has yet to summon itself so I'll continue to ride the storm forwards. Should we be able to get a play-off spot (a mere hope at the start of the season) I'll consider it a successful campaign. We'll see where the season takes us...

You are reading "Circle of Friends".