FM-LD
2 years
@ScottT Yes a massive disappointment to crash out, but we are scoring goals; but when you have two strikers starting who are 4 1/2 stars you have to get the best out of them!
Login to Quote


One to One with Debenham

After two months into the season, we sat down with St Albans’ new head coach Lloyd Debenham, who took on the position having been given the opportunity following his time at the club working with the youth teams, and with his side sitting in the playoffs early on in the season, how is he finding his time in the hot seat? We sat down with him to get his side of the story.

We gathered in his office and to say he was relaxed was an understatement; when we interview people normally they are quite uptight and nervous, but this definitely wasn’t the case with this rookie manager. Sat back in his chair with his feet up and sipping from his mug of tea.

The first thing we quizzed him upon was his thoughts on the season so far. “Yeah it has been a great start, scoring five goals in a game on a few occasions already is surprising to some, but when you see them in training and in the dressing room, I knew that this group of players was capable of having a good start, and more importantly having a good season”.

So why does he have so much confidence in his team? “Of course I have confidence in them, if I didn’t then I wouldn’t have taken the job; that was one of the incentives of taking the job. I knew that the squad had great potential, and I believe that even more having worked hands on with them for over three months now”.

On the topic of improving, transfers soon came up as a topic of conversation with the Saints boss. “When reflecting on our transfer business, I am very happy with our recruitment, was probably much slower than most people would’ve wanted with not many signed until mid-late August, but at that time players lower their wage and contract demands because they want to find a club”.

One aspect of his recruitment that Debenham has been praised for is his use of the loan market to strengthen his squad, as well as already having Harvey Bradbury on loan from parent club Watford, he also brought in Bradbury’s Watford teammate and defender Andrew Eleftheriou, alongside Gillingham striker Noel Mbo.

“Well you have to be clever in the market these days,” Debenham stated, “When you are a club in the position that we are, which is one of not the greatest financial position, you can’t pay the high wages, so bringing in players for virtually no money in terms of fees or wages on loan can be a great help”.

And a great help they have been, with the two loanee strikers Bradbury and Mbo having scored a combined total of twelve goals this season, ten of which being from Mbo alone. Not only is it a great help for St Albans City to have players of this quality, but also a great experience for other clubs youngsters to get regular football, something Debenham feels passionate about.

“Having worked in youth football for a good period of time now, I know as a coach that at this stage in their careers, they need to be playing regular men’s football to aid their footballing development. Playing in their club’s under 23s every other week isn’t going to give them that experience of being in a first team fixture”.

Having sat down with him and had a very detailed one hour conversation with him, you realise just how passionate, experienced, and humble this very young manager is. So when it comes to making assumptions about him and his abilities because of his age, thinking again.

In Debenham’s words: “Don’t judge me on my experience, or my age. Because I will just be focused on preparing the boys on Tuesday and Thursdays in training; and then you can judge me based upon the performances and results my team get on a Saturday afternoon”.

And with St Albans sitting firming in the playoffs at this stage in the season, and having already amassed an impressive thirty-one goals in twelve matches; no one can deny that they are playing an exciting and attacking brand of football.
Login to Quote

ScottT
2 years
Great update mate. Debenham is most certainly doing a very good job and proving all the doubters wrong.
Login to Quote

St Albans City’s experienced midfielder David Noble has attracted interest from Vanarama National League outfit Chester. This comes after the thirty-five year old has been a major cog in the St Albans machine so far this season, putting in a number of impressive performances for the Saints.

And it is these performances that have had the Cheshire based club circling for his signature. But with him being the club captain at his current club, it is unlikely that they will want to see him depart with him being an influential player in the playing squad.

In a recent post-match interview, Noble commented: “I wasn’t even aware of that before you told me, so if they are interested they certainly haven't contacted either myself or the club. At the end of the day, I’m under contract here at St Albans, so the club would have to make the decision as to whether I stay or go; but I’m happy here at the moment, and have no intentions of jumping ship”

Having spoken with the player himself, we also wanted the opinion of St Albans boss Lloyd Debenham, who told us: “To be honest, when it comes to just rumours I don’t take any notice of it all. I’ve had no contact from Marcus (Bignot) or anyone else from Chester, so I’m not really interested in it really, if an offer comes in, then I’ll take notice. No point worrying about ifs, buts, and maybes”.

With the transfer window in the Vanarama National League staying open until March, it is a possibility that David Noble could make the move to the North West in the coming weeks, but with Chester yet to make an official bid, there doesn’t appear to be much movement on this speculation at the moment.
Login to Quote

Another fantastic month for us, at the moment we just seem to be impossible to beat, every game we look like we are going to win, and we are creating many chances which is a great positive we can take from our performances.

We are now making that charge towards top of the table, but Bath have been a very strong side this year, their only defeat being against us, when we beat them 6-1. We just have to ensure that we keep our standards up and keep performing.

The tactic appears to be working wonders which is fantastic, as usually I’m not very good at creating tactics on FM, if you want me to, I can put a screenshot of the tactic on my next update.
Login to Quote

Sorry for my lack of updates, however due to completing my final assignments for college I’ve been unable to play football manager much lately.

However, having now completed all my work for the year, I will now resume with the save and of course the story.
Login to Quote 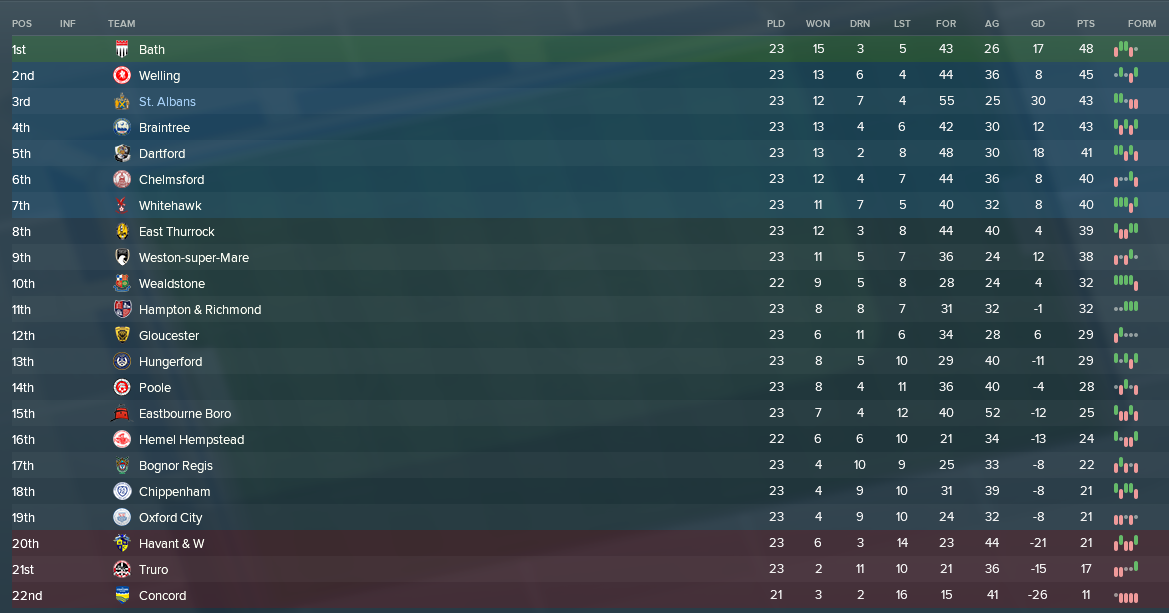 This period had a number of highs and lows, generally positive as we kept our unbeaten run going all the way through to late December, where unfortunately our form dropped towards the back end of December, resulting in back to back defeats against Wealdstone and Hemel Hempstead.

But the positive was our work in the cup, having performed poorly in the FA Cup, it was crucial in my mind that we do our best to go as far as possible in the FA Trophy. We did this in victories against Hungerford Town and Horsham. An exciting tie against Guiseley from the league above will be an exciting match and a good test for our players.

We sit comfortably in the playoff spots at the half way stage of the season, I said at the start of the season that it is what we want to achieve, however now I want to make that push to finish the season as champions. To do that, we might try and bring in a player or two, especially and injuries have hit us over the Christmas period.
Login to Quote

ScottT
2 years
A very busy month and a fairly decent month to boot. The FA Trophy campaign has started very well, so hopefully that can continue to give a slight financial boost; as well as ending with a Wembley win.

Shame about the conclusion to the month, but you're still in those play-offs, which is the main thing.

By the way, you've made a slight mistake with the coding in those last two results.

Sadly, when I went to open up the save, I was met with this. Hence, I will be ending this story, which is a great shame because I really enjoyed it. However, I will be starting a new story shortly which will hopefully be as good as if not better than this one.
Login to Quote

ScottT
2 years
How unfortunate. Good luck with the next save and story you do next, I'm sure it will be just as good as this was!
Login to Quote

You are reading "St Albans City FC: The Rise of the Saints".