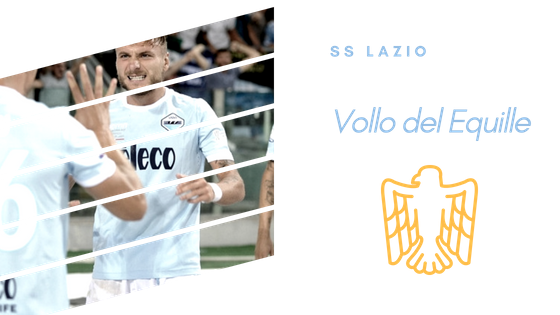 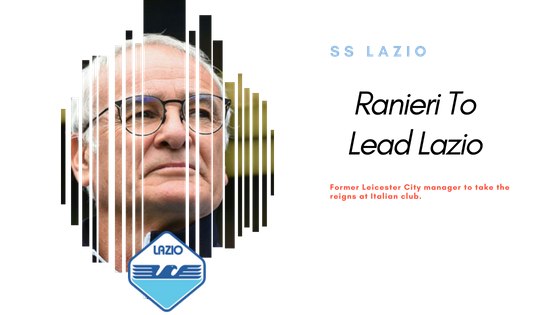 The Italian was formerly managing Nantes, before leaving by mutual consent just four weeks ago.

With the World Cup still to come before the start of the season, Lazio moved quickly to acquire the services of the experienced leader ahead of the transfer window for the Serie A.

In response to his arrival, supporters trust director Gianluigi Baori felt hard-pressed to contain his excitement;

"Ranieri is a manager with pedigree, and we can't wait to see his experience when the new season comes. I believe we can mount a serious challenge for Champions League football this season with him at the helm."

Ranieri is set to have a press conference in the coming days, where he will discuss his vision for the club.
Login to Quote 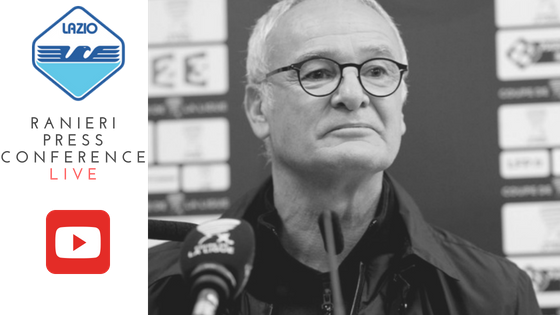 Welcome Claudio, to the Stadio Olimpico where we are here today to officially reveal you as the new manager of S.S Lazio. How does it feel to manage such a historic Italian club?

Well, I have managed some historic clubs in Italy that is for sure. Parma, Roma, Juventus, Inter Milan - and now Lazio. But history is not something that is important. I will be history at some point and people will remember better managers than myself. What we carve out of what we have and use to shape the future, that is important.

Poignant stuff. What can the fans expect as a difference around here?

I pride myself on being a real pusher for unity. I hope that the performances on the pitch will show the unity of the squad. I also want to experiment more - when was the last time we saw an Englishman in Italian football? Ravel Morrison and Micah Richards, they do not count. I am talking more in the terms of Gascgoine and Platt.

You mention Ravel Morrison - is that the kind of player you'll be looking to sign?

Not at all. I believe one rotten apple in the basket and the whole batch can go bad. I want model professionals in my side. I know that some people have a past - but I can only look past that if they've attempted to escape it.

Interesting. What can we expect from pre-season then?

I believe a few new faces, and possibly a goodbye from a few others. De Vrij has already departed for Inter Milan - so he has left a gap that will need to be filled. We will be travelling to England for a pre-season training camp and then playing friendlies so we can gear up for the season ahead.

That will be all today - thank you.
Login to Quote 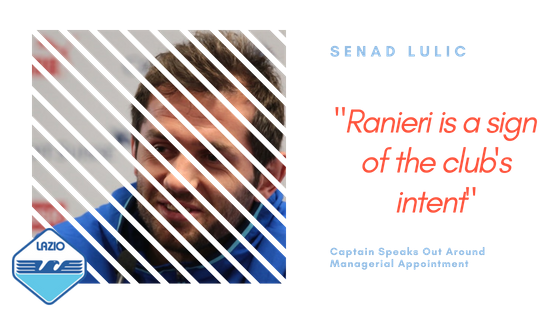 In a press conference today, Senad Lulic, the 32-year-old club captain told the journalists in attendance that he believed Ranieri was a real sign of intent from the club.

Ranieri, who has managed over 1000 games in football, has experience in the top leagues of Europe, including Serie A, the Premier League, Ligue 1 and La Liga.

In other news from the club, a number of players have been told they will no longer have a future under Claudio's reign.

Forward Antonio Rozzi has been told to look for another club - with the Italian appearing three times for Lazio during his eight year spell with the club.

Veteran goalkeeper Ivan Vargic has also been told to look elsewhere, with the 30-year-old Croatian not looking likely to feature this season.

Serbian forward Filip Djordjevic has been placed up for sale by the club, with his 11 goal return in 68 games deemed not good enough.

Another player on the books at Lazio for a number of years, Guido Guerrieri will be sold. The 21-year-old goalkeeper has never appeared for the club

Finally, Patric, the 24-year-old Spanish full-back will leave the club after signing for Lazio in 2015 from Barcelona on a free transfer.

And whilst a number of players will be shown the door, a number of youth prospects have been promoted from the side's U20 squad.

Bruno Jordao and Pedro Neto, both on season long loans from Braga, and home-grown prospects Abukar Mohamed and Alessio Miceli will train with the first team for the foreseeable future.
Login to Quote

Aaron
3 years
I tried my hand at Lazio. It was a decent save though I pulled up no trees other than a Europa league trophy. I hope to see you do better as I'm a big fan of these guys
Login to Quote

ScottT
3 years
Brilliant start here and I am in love with those graphics! I'm a big fan of Ranieri and the way he presents himself, so for that alone; I look forward to this.

BingoDog
3 years
Thanks all!
Login to Quote 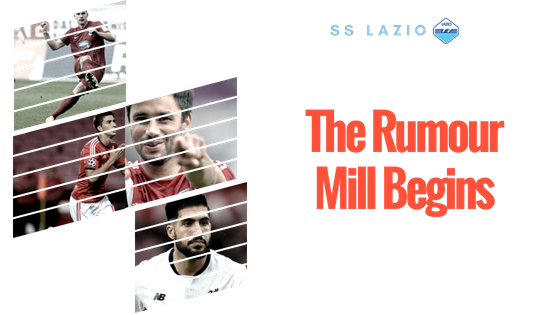 The rumour mill has begun even before the start of the World Cup in Russia, with S.S. Lazio linked to a number of free agents.

The first is the most unlikely, with German starlet Emre Can linked with a move to Italy. Juventus, Lazio, Roma and Napoli have all enquired about the player's services, but it may be wages that prove to be the stumbling block. Can has not ruled out a move to Italy as his contract winds up at Liverpool, and it seems his most likely destination.

Another Premier League player, West Bromwich Albion's Claudio Yacob has also been linked. His contract with the Midlands club expires this summer, and it seems that the 30-year-old will want to ply his trade in a different league. Once more, wages seem a likely issue.

An interesting rumour comes in the form of German defender Kevin Kraus from Bundesliga 2. side Heidenheim. The 6'3" centre-back had been at the club for a number of years and was the sides Vice Captain, but it seems he has been deemed surplus to requirements at the Albstadion.

Rumours in Rome also state that Serbian midfielder Filip Djuricic is close to joining his compatriot Sergej Milinkovic-Savic at Lazio, joining from Serie A rivals Sampdoria, who plan to release him this summer. It is thought that Djuricic has put pen to paper on a 26,000 euro a week deal.
Login to Quote

walkinshaw
3 years
A nice layout and start mate, love a lazio game norm each fm myself so good luck.
Login to Quote 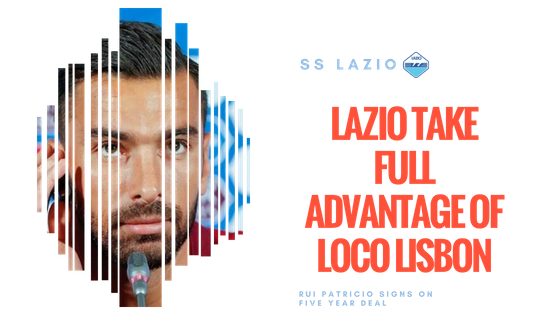 S.S Lazio can today announce their first signing of the 2018/19 season in the form of Portugal international goalkeeper Rui Patrício.

Patrício lead the exodus away from Sporting Lisbon this summer after players were unhappy with the way their President was running the club, terminating his contract and placing himself as a free agent.

Lazio were one of ten clubs chasing the 29-year-old's signature, with Rui's former team mate Daniel Podence signing for Arsenal a number of days ago.

Rui Patrício put pen to paper on a five-year deal, keeping him at the club until 2022. It is reported he will be earning around 62,000 euros per week.

"As fans we're really pleased with the signing of Rui Patrício and we expect him to be a real key member of the squad."

"Patrício comes with a real winner's reputation and his presence at the club can only be a positive one."

The Euro 2016 winner has been sent on an intensive language course to aid in the speech difficulties, however the Portuguese keeper has a few compatriots at the club to help him bed himself in.
Login to Quote

BackPostHeader
3 years
Big fan of the graphics man, the presentation is really on point. Best of luck with Lazio!
Login to Quote

Thanks dude!
Login to Quote S.S. Lazio have today announced their second signing of the season, in the form of Serbian international player Filip Djuricic.

The midfielder joins on a free transfer from Sampdoria, where he played 19 games last season.

Djuricic has had somewhat of a journeyman-like career, being on the books at Red Star Belgrade and Olympiakos, where he failed to make an appearance, before playing for SK Radnicki Obrenovac, sc Heerenveen, Southampton, Benfica and Anderlecht before he wound up in Italy.

At just twenty-five-years-old, the playmaker has certainly experienced a number of styles of football, and this has seen him represent his national side 25 times at a senior level.

Djuricic signed a three year deal thought to be worth 26,000 euros a week.

"I'm a little unsure about the signing of Filip, he seems like more of a back up option to me."

"I hope he can provide what is expected of him when he's called upon and wish him all the best at the club."

"I hope he is a successful signing."
Login to Quote 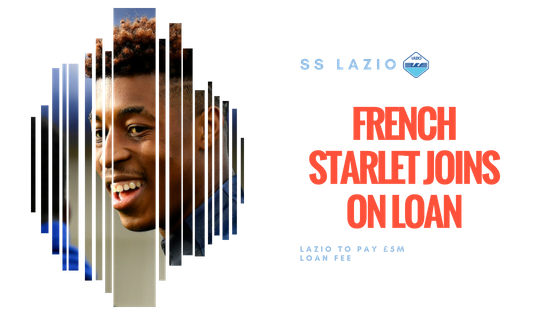 S.S. Lazio have today announced the signing of promising French defender Presnel Kimpembe on a season-long loan from Paris Saint-Germain.

Kimpembe, who has recently broken into the first team at the Parc Des Princes has spent his entire career at the club - joining at the age of 9.

Now 22, the highly rated defender is moving to Rome for a year to gain more first team experience.

The club will pay the ball playing defender his full 35,000 euro a week wage, as well as a loan fee to his parent club.

"We're pleased with the signing of Kimpbembe."

"He should turn out to be a first team regular for the club this season."
Login to Quote