ScottT
1 year
I know somebody that is pleased to see Oxford City at the top of the league...

Things seem to be going rather well at the moment, it's all about keeping this going though and ensuring you finish top of the pile - as I'm sure you don't fancy going through the pain of the play-offs again and becoming another Chelmsford.
Login to Quote 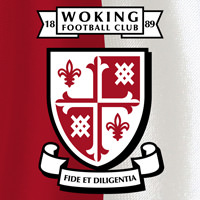 I must admit there was a little fear at the beginning of November as we had to come from two goals down to beat Truro 3-2 with Luer banging in an impressive hat trick. I said i smelt a giant killing and Morecambe was nearly it as we lost to a 95th minute winner but we did play the whole of the 2nd half with 10 men after Ellul got himself sent off. Again we were 3-1 down at one point so we have the drive to come back.

The lowest point was the hammering we took from Promotion rivals Eastleigh who absolutely smashed us in what is the worst performance in the last 18 months of game play. Things were low but a little pep talk saw us limp over the line against struggling Basingstoke before we had a comfortable 2-0 win over Ashford in the FA Trophy.

However, the month of December was almost faultless as we beat Oxford City 2-0 and as you remember they were up there fighting with us for promotion. Maidenhead came down last year but are struggling and it was the only blip of the month as we sneaked a 1-1 draw. Than the FA Trophy saw us have another chance to bang the goals in, smashing Margate 6-1 with Hessenthaler hitting 4 before beating sorry Hampton and Richmond 5-1 on Boxing day. 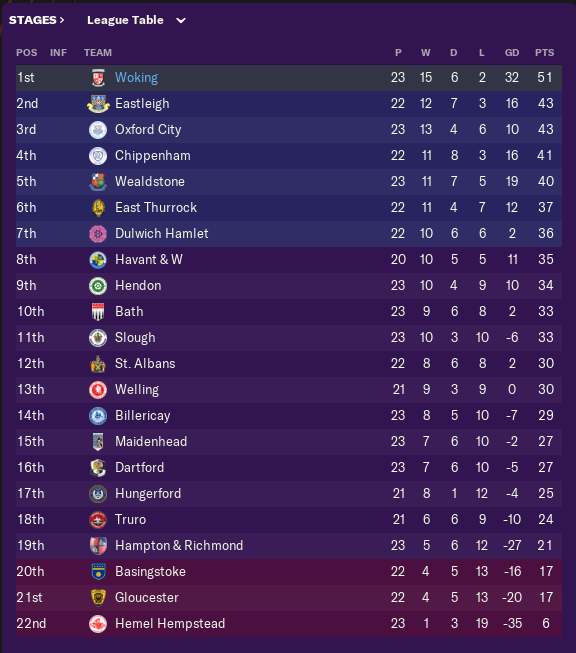 We are 4 points better off than this time last season and Eastleigh and Oxford have allowed us to get some breathing room. I suspect the gap will close to 5 points when Eastleigh play their game in hand but right now we are dominating. I have to win the league from this position and to be fair i am confident i can do so with Hessenthaler and Luer who have 44 goals between them this season already. No more reliance on just Luer and the young Hessenthaler (already rated a Championship prospect) being an absolute machine. Billy Knott's contribution in midfield from set pieces is also helping and we might finally get ourselves back into the 5th tier of English football.

In fact our form was so good in December, i won Manager of the Month and i attracted the interest of National League Side Wrexham which i obviously declined.


We also have a new number 1 as i bought in 23 year old Alex Palmer formerly of West Brom on a free transfer with German Bert Schotterl now playing second fiddle. I did sell on 3rd choice keeper Sam Mason to Billericay for £1k as i still desperately try to keep our wage budget down.

Interestingly Billericay's wage budget is now £3m per annum and they have a net spend of over £100k! It clearly isn't working for them.


Russell Hessenthaler won it last time and this time it has to go to Greg Luer who has scored some vital goals, 10 in all over the last two months and now sits on 24 goals for the season, 17 of which are in the league. It means he now has 51 league goals for me (64 overall) and is already a club icon.
Login to Quote

ScottT
1 year
A slight gap opening between yourselves and the rest of the pack. Alex Palmer is a fantastic signing and should be a real boost to your season. I think promotion is very much on the Cards.

Justice
1 year
Soaring at the top of the table! Shame about the FA Cup result but that hammering in the FA Trophy must certainly make up for it!
Login to Quote

mgriffin2012
1 year
Eight points clear at this stage of the season is nothing to be scoffed at, very good achievement!
Login to Quote


The Woking charge is still on people as we perfected the month of January with 5 wins from 5 including a very impressive victory over Vanarama National league leaders Grimsby 3-1 in the FA Trophy 2nd Round. Which obviously meant i won the Manager of the Month.

In the League,the secret to our success has been the ability to smash and grab early on in the first half and with that we have been held on to win the games and to extend our winning run to 9 straight games. As we moved to February, though the form has taken a little hit but things are still looking pretty good.

We won our 10th match on the trot smashing Hungerford 4-1 before the form hit that little wobble. We crashed out of the FA Trophy to Kidderminster 3-2 having conceded another late goal (94th) which quite frankly pissed me right off. That led to 7 points from the next 4 league games which isn't the worst form but considering where we have been it was a little disappointing. However, it is the league table that matters and this is where i can only smile. 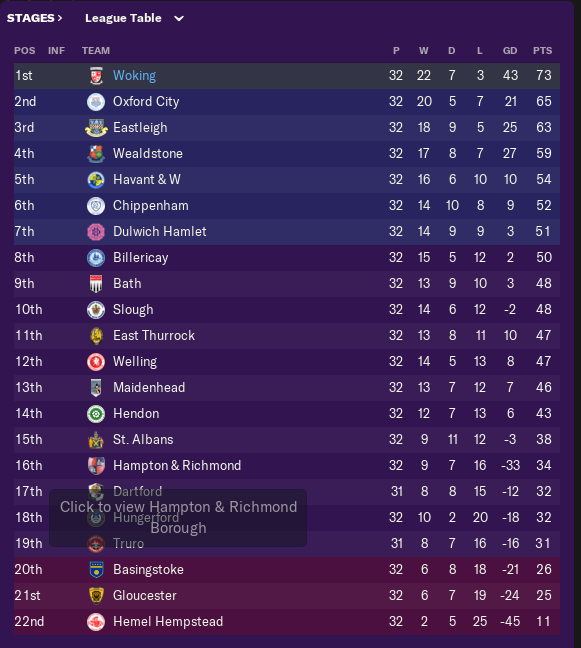 The 8 Point gap is still there and we have 10 games to go. If we can avoid our March and April wobble from last season we will have that promotion in the bag. Hessenthaler and Luer slowed down last month with a measly 5 goals in the last month so i am going to have to give them a little pep talk to get us over the line.


The 2nd Youth intake is now in and it looks relatively tidy, although there isn't a Russell Hessenthaler who can go straight into the team and smash it. 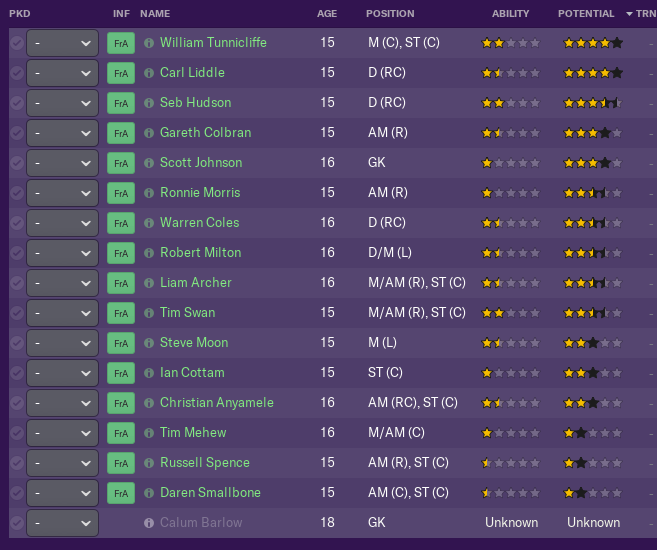 Seb Hudson and Carl Liddle could both be useful centre halfs with some work. Hudson has good determination which i normally find aids development whilst Liddle isn't lacking there but probably has the better physicals and technicals that are needed.

William Tunnicliffe is probably the other decent looking prospect as a potential midfielder. He has good passing for this level and technique but will need a lot of mental work as well as physicals to be a regular.


Normally this prize just goes to either Hessenthaler and Luer and whomever scores the most goals but this time there will be a slight change as Callum Ellesley takes the prize. The centre half has picked up his performances and has formed a nice little relationship with Joe Ellul.
Login to Quote

Justice
1 year
A very good youth intake, could already provide decent cover for your first team should they be needed.
Login to Quote

ScottT
1 year
Some decent prospects in the mix there, which will be helpful in some capacity; whether that be for your team or as a financial boost potentially.

A decent gap between yourselves and Oxford remains, so fingers crossed you keep it that way and seal promotion!
Login to Quote


If i told you the month of March saw us get thumped twice, it would probably tell you how my nerves felt during these three months as we tried and tried to throw away the league title. The fact one of them thumpings was against BIllericay who i lost 6-0 hurt even more as i just seem to hate their flashy big bollocks lifestyle.

To cut to the chase, we were dodgy as hell in the back few months of the season and like the year before we started to concede goals and it let Oxford City back into the title race. With just 3 games to go we were 4 points clear and had a home tie against Oxford City, win and the title was ours, lose and we were going to the wire.

Greg Luer, made sure it was not going to slip as the main man and Mr. Reliable slotted home a 94th minute winner to give us a 3-2 win and my first piece of silverware on FM19!! 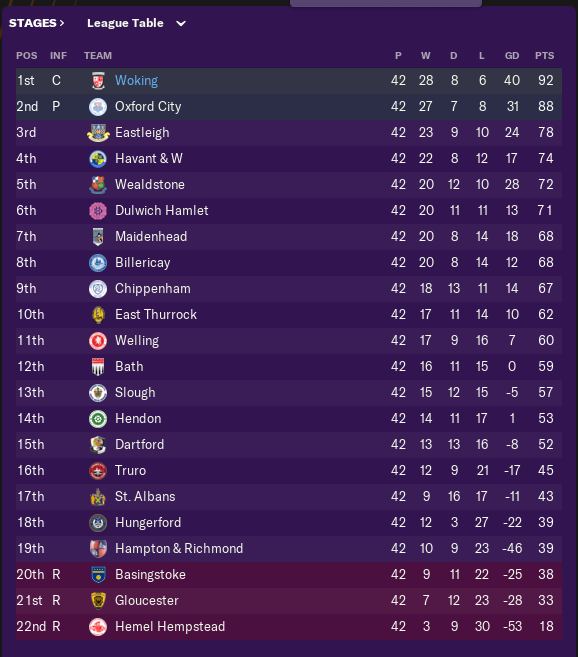 It wasn't all bad though for Oxford as they got through the lottery of the play-offs to see them join ourselves in the National league next season.

Woking's player of the season


There are three men in the running for this award. Greg Luer was top scorer again with 37 goals which wasn't enough to be top scorer in the league but his goals are vital. Than we had Billy Knott who in the centre of midfield ran things, 7 goals and 15 assists was a missing asset in my first season and he has easily been my signing of the save so far. However, i have to agree with the fans and give it to Russell Hessenthaler. The teenager is a sensation and is far too good for this club. 31 goals and 17 assists from a 16/17 year old is unheard in one of my saves. A cracking player who is already an Icon for this club after just 1 season. Championship clubs are sniffing around and if this is the one season i get to manager this guy than what a season it has been.


Back in the Vanarama National it took probably one more season than i first hoped and i would have liked. Early predictions see us being one of the favourites to go back down and we are going to have to revamp the squad somewhat to be ready to compete in what will be a tougher league. Personally i am hoping there to be no more than 3 seasons in this league, with next year's goal to be mid table, the season after that a play-off spot and the 3rd season seeing us win the league or win via the play-offs. Within them 3 years a little FA Trophy wouldn't go amiss either. Wage budget has been doubled to £18k per week and we have £60k to spend on new players. Time to go shopping.
Login to Quote

Justice
1 year
Congratulations on securing the league title and promotion! You have money to spend now, hopefully the players you need are available!
Login to Quote

ScottT
1 year
Congratulations on promotion, it has been coming for a while now. A decent budget available in your return to the National League, so hopefully that will help you make some useful additions to strengthen and push on again next season.
Login to Quote

Jack
1 year
Get in! Love managing Woking and the fact that you're on the up with them now into the fifth tier I just hope you gather the momentum to get straight into the Football League.
Login to Quote

mgriffin2012
1 year
Congratulations mate, an outstanding achievement, and hopefully the first of many!
Login to Quote

JT
1 year
Thanks for the support guys. I have started the 3rd season so should have an update shortly... things are quite interesting
Login to Quote