mgriffin2012
1 year
Four wins from five games in the league is a very good start, defeats are going to happen but you've bounced back from it well enough and things are looking rosey in the league! The cup defeat is unfortunate but onwards and upwards!
Login to Quote

jmc-1989
1 year
The level of detail you go into I'd amazing! You should be proud of what you are producing!
Login to Quote 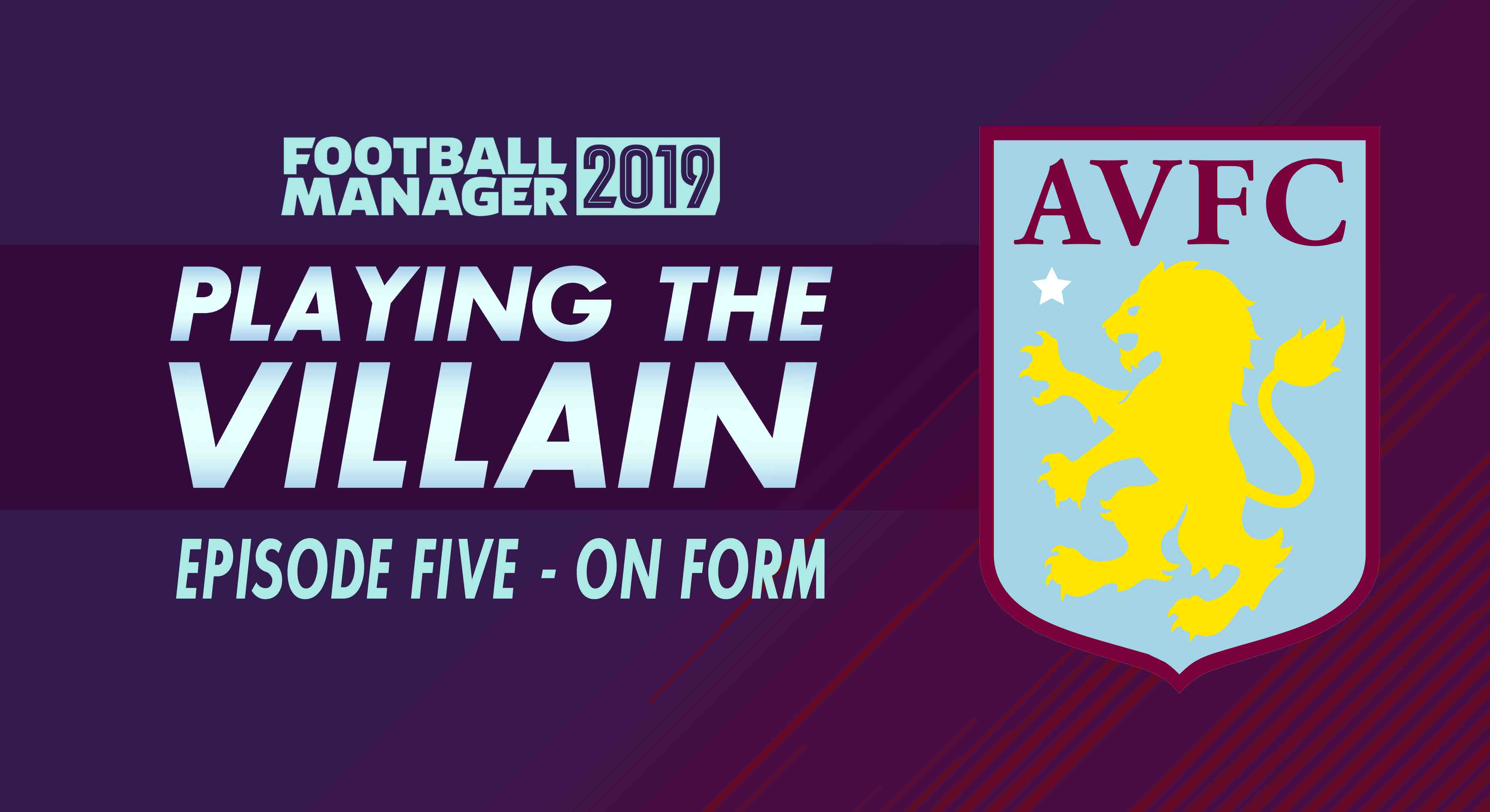 And the Aston Villa Express just keeps on rolling. Destination, Premier League. Okay, we are only ten games in, but morale is high and form is good. Let's have a cheeky look at the results and see why I'm maybe getting a bit carried away.

But before we do, please have a look at my blog at superclasicofc.com to keep up to date with the series and show some love. 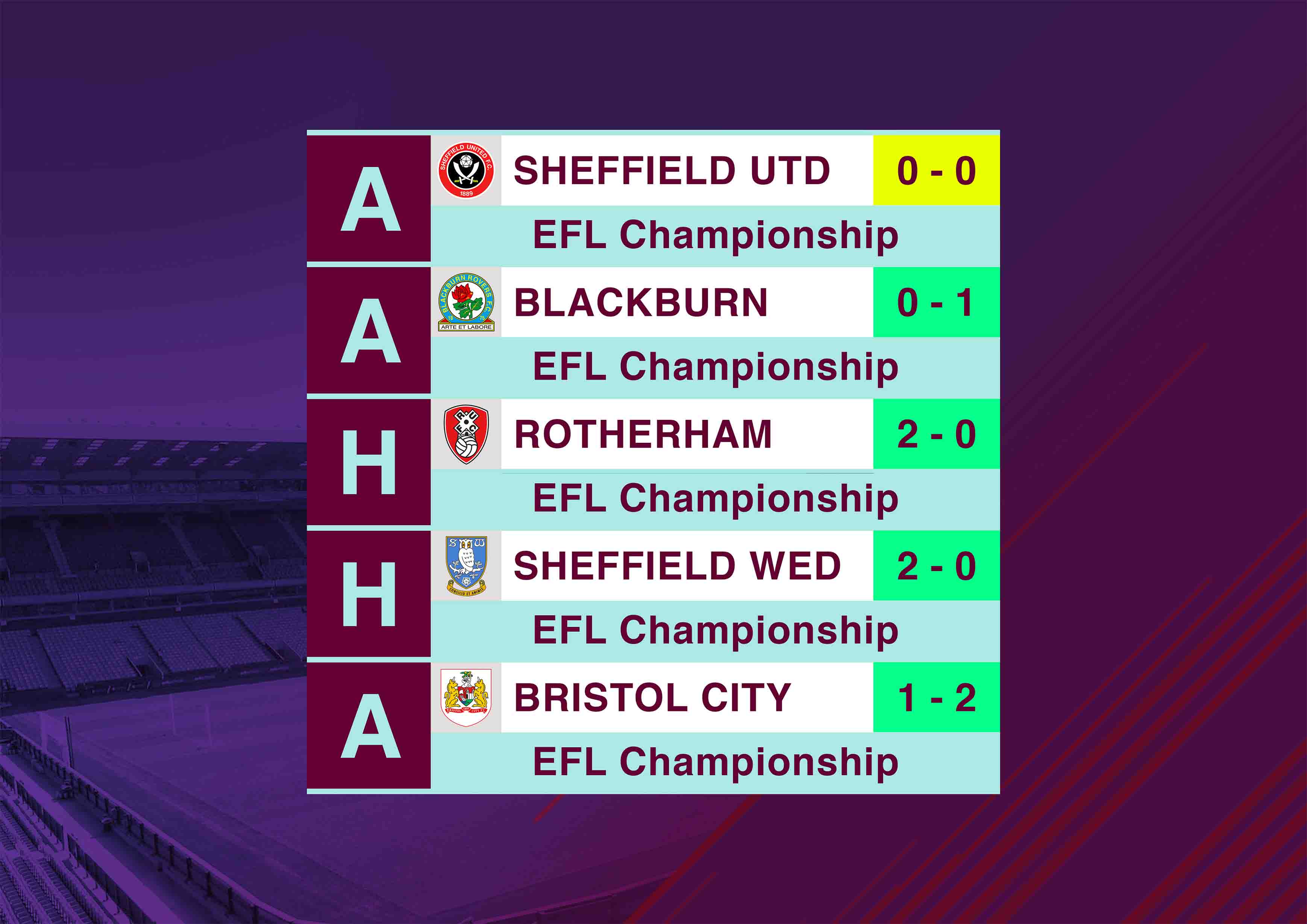 Our second month in charge of Villa would've been perfect if not for this result. Sheffield United were well inside the top half when we played them, and seem to be in with a chance of a playoff berth. It was by no means going to be an easy match. There is a real spirit in this team that only two seasons ago were in League One, and we knew we'd have to be at our best to beat the Blades. 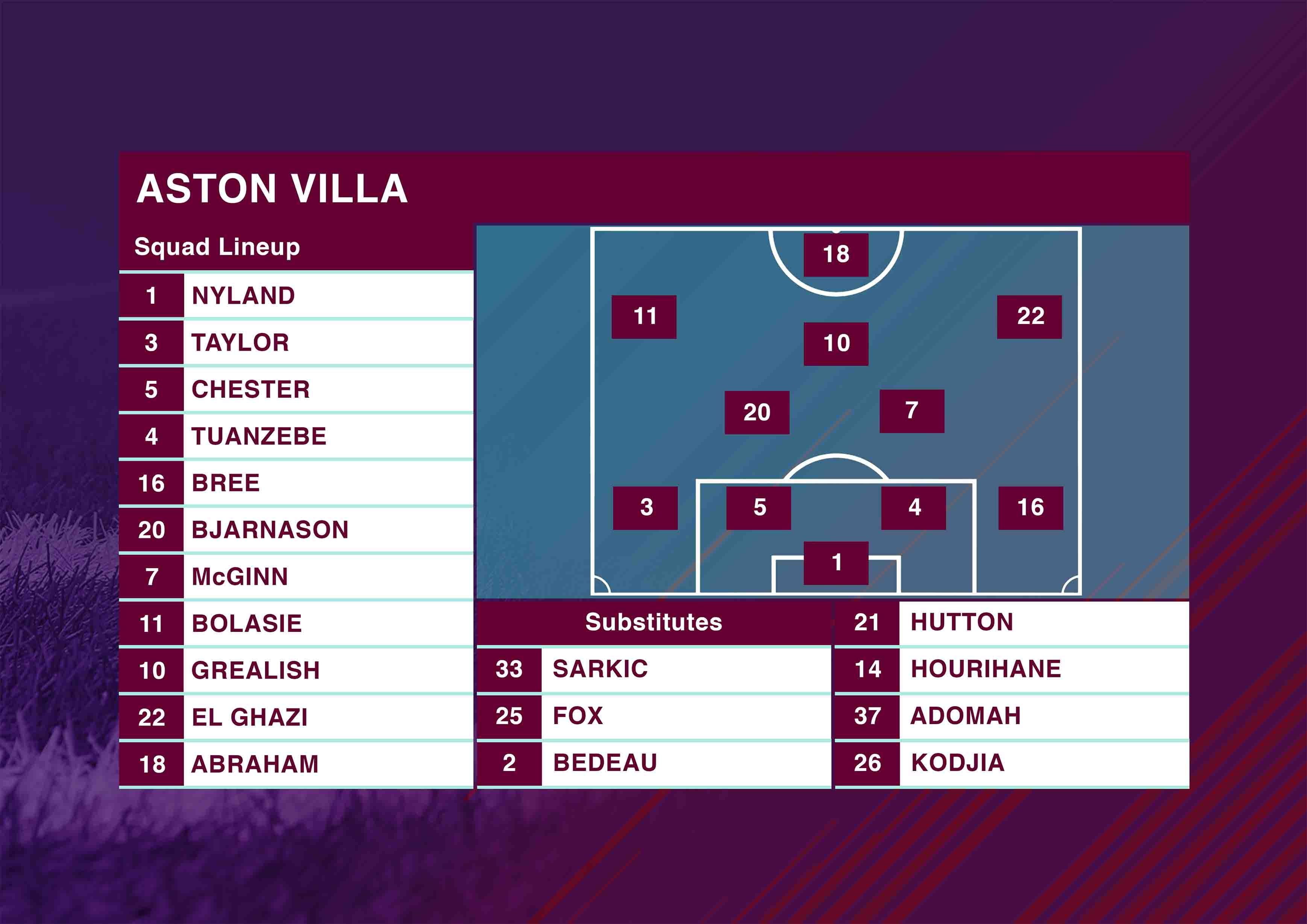 Away at Bramall lane we played a strong team, with our only change being Conor Hourihane out for John McGinn. Hourihane wasn't fit for this match due to his high workload pressing opposition playmakers during matches. McGinn is natural as a deep-lying playmaker on defend, but we in the absence of Conor we lost  a lot of threat from set pieces. Tammy Abraham lead the line and James Bree looked to continue his fantastic form from right-back. 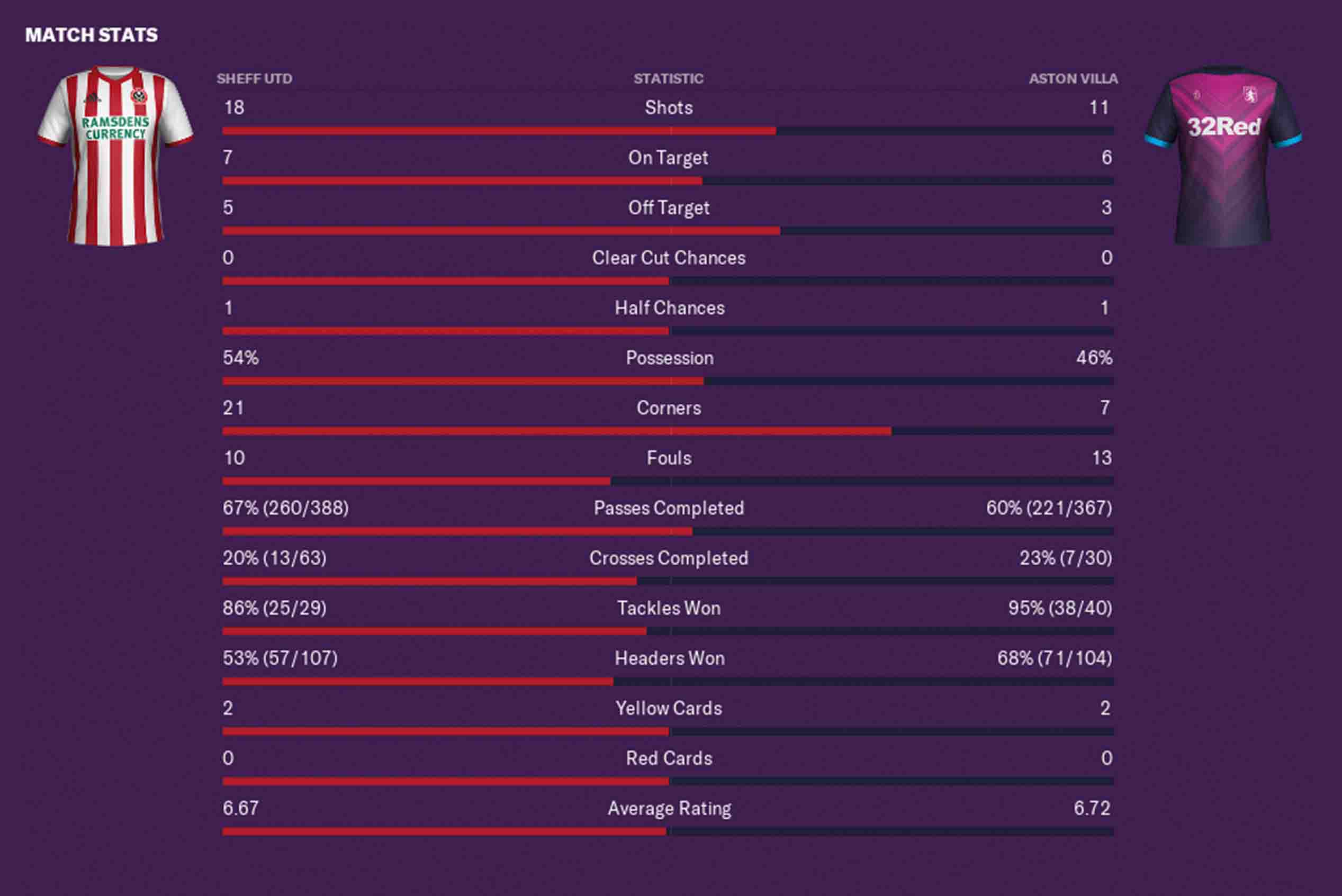 The match was a well fought affair, as the stats suggest. We certainly held our own, but the game was incredibly tight defensively. Chris Wilder set his team up to stifle, and we struggled to break down their back five. With only 3 key passes to United's 8 the opposition clearly did a good job of marking our play makers and stunting their creativity. However, it would be disingenuous for me to suggest that the Blades only went out to play a defensive game. They were able to break with pace through Liverpool loanee Ben Woodburn, who was their main threat, and cause our defenders some problems. But we held strong, and by switching to a deeper defensive line were able to keep a well earned clean sheet.

As I said, it was Sheffield United formation that gave us a lot of problems. Their fullbacks marked our wide men out of the game, Tammy was swamped by their 3 centre-halves and Oliver Norwood saw that Super Jacky Grealish wasn't at his mercurial best. In matches against systems such as this, it may be best to match our opposition tactically. Also, by developing a 5 at the back system now we'll be well prepared for the attacking bombardment we'll undergo in the League above (if we get promoted).

A pretty routine win followed the Sheffield United match. Once again, we played away from home but this time I got all three points against Blackburn. The goal game from a Anwar El Ghazi free kick which was nodded home by Axel Tuanzebe, who has been super consistent so far this season. Tammy Abraham had a Weston super mare, squandering chances left right and centre.

The boys were back in town at Villa Park, and we dominated. Rotherham quite literally didn't have a shot, whereas we had 23 and 62% possession. Jonathan Kodjia snagged both out goals in a flawless 2-0 win.

Wednesday put up a bit more of a fight in this fixture. Barry Bannan even missed a penalty kick in the 5th minute, which could have changed the outcome of the game significantly. The Owls looked to attack us, which was a mistake, as we ruthlessly counter attacked them for both of our goals in a 2-0 win. Again, Jonathan Kodjia grabbed them both.

Back on the road, we headed to Ashton Gate to face fellow promotion hopefuls Bristol City. All 3 goals in our 1-2 win came in the opening 15 minutes. El Ghazi opening the scoring with a classic inside forward goal cutting inside from the right. Hourihane followed that up with a contender for goal of the season from outside the area on the volley. Bosh. Bristol City's Marlon Pack tried to go one better with a beautiful curling free kick, after which we shut up shop and took three much needed points from a good side. 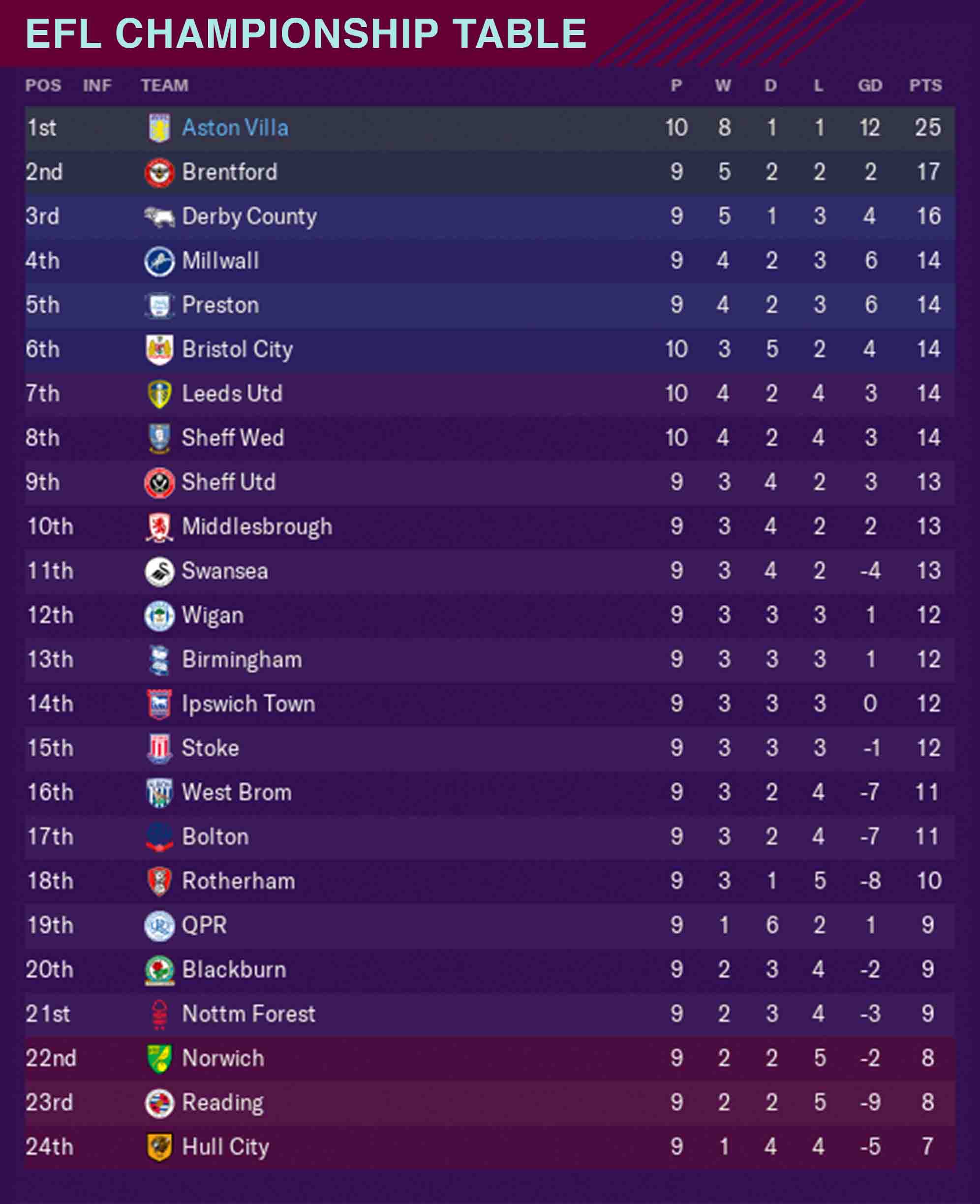 So, after our first 10 games, the table looks like this. 18 goals scored and only 6 conceded gives us the best goal-difference in the League by quite a margin. We sit top of the table, ahead of Brentford (who have a game in hand) by 8 points. It's early days, but I'd argue that it's always good to be top of the League.

During my second month in charge, Mile Jedinak came into my office for a serious conversation. The Australian midfield general opened the door with a stern look on his face, and stated that he wanted a move. I was shocked at first. Our vice captain, who has 'Lion DNA' coursing through his veins, wants to leave? Surely not.

But Mile calmly explained to me that in his final years of his career he wanted to be playing first team football. He appreciated that the team were playing well, and recognised he'd probably spend much of the season on the pine.

As a leader and a consummate professional Mile told me he'd be leaving at the end of his contract, so if I wanted to make some money from him I should sell him in January. Begrudgingly, I accepted. We firmly shook hands (I've still got bruises) and headed out to training.

To be honest, Mile wasn't really going to playing much this season, so losing hime won't be a massive loss to the squad. But what Mile will leave behind is a leadership void. Luckily, we have the opportunity to bring Tommy Elphick back from his loan at Hull. With a 'Lion DNA' rating of 61 he'll go some way to fill the leadership gap. However, he's still five points shy of Jedi Master Mile Jedinak, who in a few months will leave us mentor-less with only a crumpled Jedi robe where he once stood. 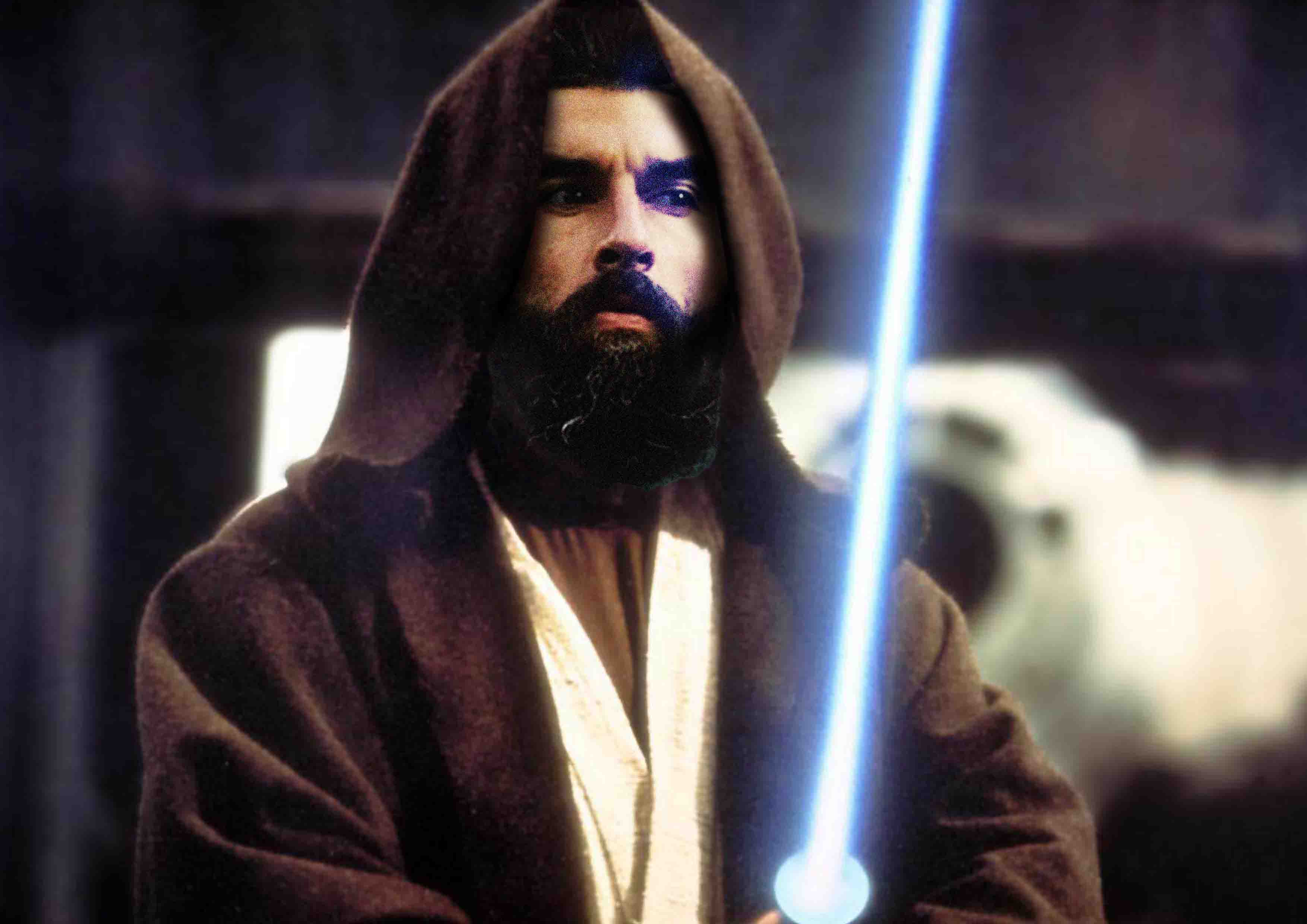 Henry Lansbury also had a word with me about his future this month. The 27 year old came to me, asking for more first team football. My policy is that I won't drop a player who's on form, and in this case the player in question is Conor Hourihane.

Also, thanks to FM19's new training ratings feature, players can no longer hide during training session. Henry Lansbury has often been popping up as one of our worst performers in training, which doesn't really give me much of a reason to select him.

I explained this to Henry, yet he was set in his ways. I offered him some game time of the bench, but he refused. Of course, as our conversation clearly illustrated, Henry Lansbury doesn't have the 'Lion DNA'. I don't want unprofessional players in the squad, so Henry was promptly punted to the transfer list. He's got a decent value of around 3 to 3.5 million so hopefully we can pick up a more resilient and professional backup midfielder during the upcoming transfer window.

Rushian Hepburn-Murphy (yeah I know, what a name) was sent out on loan to AFC Wimbledon during the last window and the guy has been on fire. Goals, assists and lots of game time means that it's looking more and more likely that the young lad will make his way into the first team in the near future. 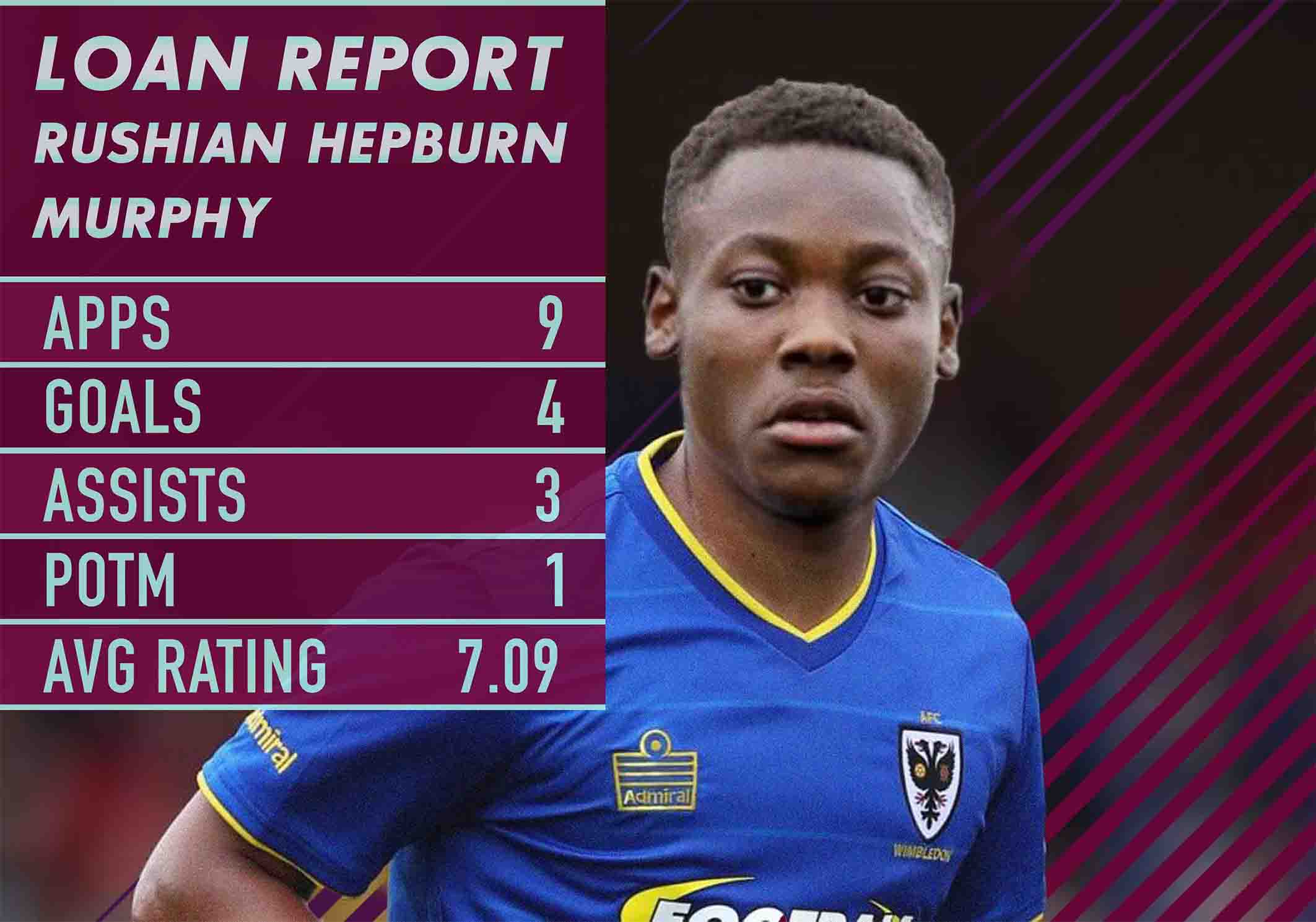 PLAYER OF THE MONTH - JONATHAN KODJIA

This month I've had some less than ideal conversations with players who were unsatisfied with their playing time. However, if they need inspiration on how to conduct themselves whilst out of the team, then they should look no further than Jonathan Kodjia.

To be honest, the Ivorian striker wasn't part of my plans at the start of the season. Chelsea loanee Tammy Abraham lit up preseason with goals and continued that form into the beginning of the season, and I was pretty sure (barring injury) that he'd be my first choice striker. Behind him in the pecking order I had Scott Hogan, as he's a very different player and offers us some attacking alternatives.

But I've got to hold my hands up and admit that I was wrong. Following a poor performance against Blackburn Rovers (which earned him a dismal 6.2 average rating) I dropped Abraham. He hadn't hit the score sheet in 3 matches, so we needed a change. Scott Hogan had been poor in training, so Kodjia got the nod to start his first match of the season. Whenever you promote a player from the bench to the first team you hope they grasp the opportunity, and Jonathan did just that. 2 goals in his first appearance of the season was followed by another brace against Sheffield Wednesday. He led the line with physicality and finished the chances he got with composure. Kodjia has been a revelation this month, and he's given me no choice but to reassess my ranking of our 3 main centre-forwards. 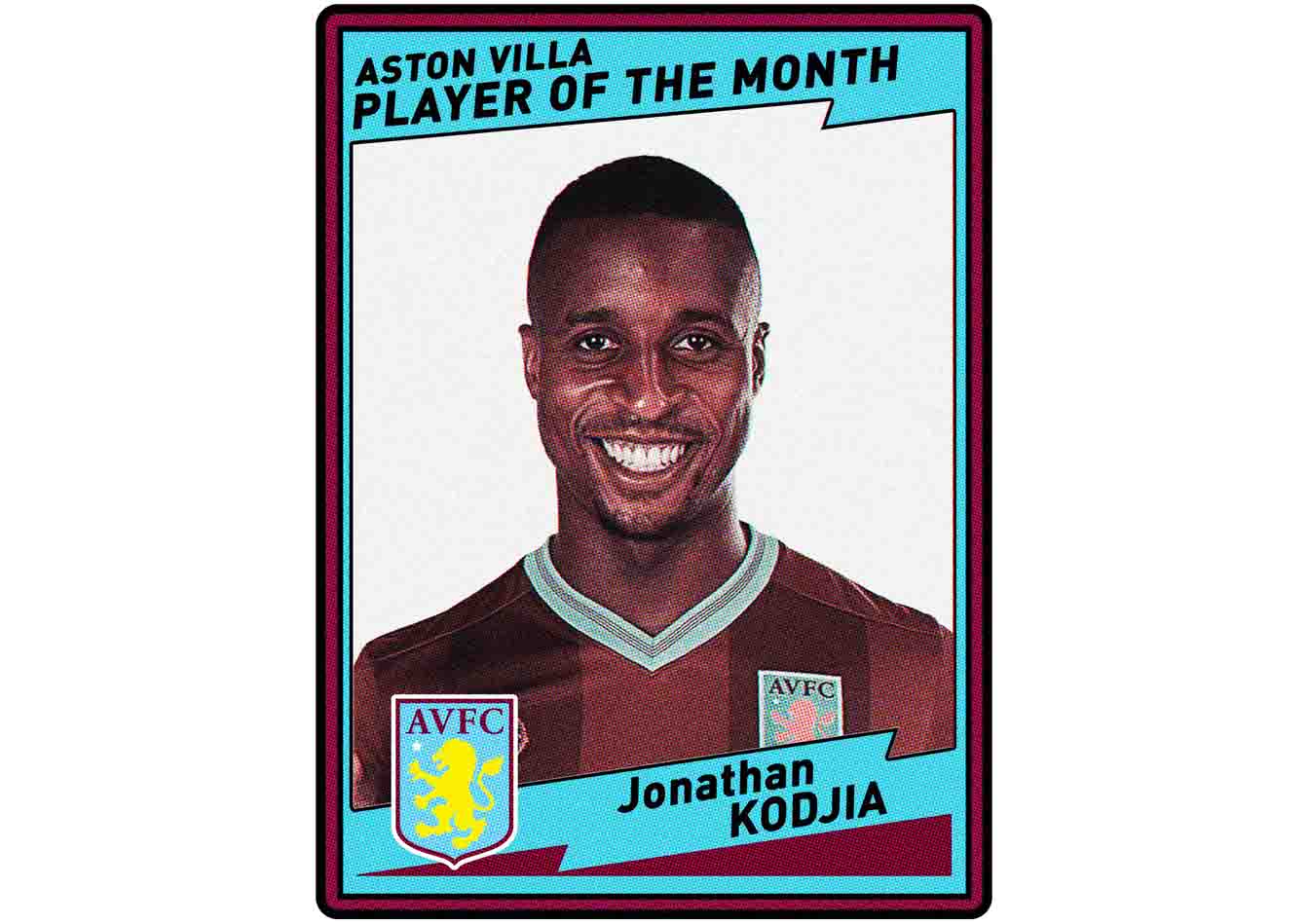 Thanks so much for reading, I hope you enjoyed. If you did, a like is much appreciated. Make sure you also follow the blog so you don't ever miss a series update. Thanks again, and see you next week. Up the Villa.
Login to Quote

mgriffin2012
1 year
An unbeaten month is nothing to be scoffed at, and to sit 8 points clear after 10 games is something very special
Login to Quote

ScottT
1 year
Fantastic month there. Great to see Jonathan Kodija enjoying such a good run in front of goal. That will certainly boost his confidence over the course of the season and therefore help you as a team. Shame to see Mile leaving as he is a very professional player, with a great wealth of experience; however it has to be done to gain a fee. Looking forward to seeing who fills in the leadership gap, if Elphick doesn't return.

Hepburn-Murphy is looking a bright prospect and someone I'm familiar with. Glad to see him getting minutes at Wimbledon in the league below and impressing with several goals to his name already this season.

Looking forward to the next update again; I'm really enjoying them!
Login to Quote

Good to see the form coming in, you look set to steamroll the league now!
Login to Quote

You are reading "PLAYING THE VILLAIN".