Justice
3 years
27 goals in 28 games in the league is insane O.O
Login to Quote

It was always going to be difficult to replicate my form of last season but I'm happy with a return of 16 goals in 36 games. Unfortunately, we weren't able to retain our Premier League title but we did win the Community Shield. I scored 5 goals in 9 games in the Champions League but we lost in the quarter-finals against Man United on away goals.

I'm happy with the way the 2010/11 season went. At 32, a lot of pundits have been writing me off but I proved them wrong by scoring 19 goals in 35 Premier League games over the course of the season. I did struggle in the Champions League though, scoring only once in eight games which was disappointing. I did finish 2nd in the Premier League top goalscorer category though which was pleasing. No England caps though unfortunately, I think my England career is over.

An average season really. I didn't really play as much as I would have liked but I still managed to score 12 times in 27 appearances. Not a bad record really for someone at the age of 33! I also got my first taste of success in a continental competition as we won the Europa League. I really put my best performances in whilst playing in that, scoring 5 in 6 games. I'm going to see how next season goes and access my options then as my contract runs out at the end of next season.

Well, it's safe to say that my Liverpool career is over. I only played 12 times in the Premier League, 10 of those coming from the bench. I did manage to score 3 goals though. It's disappointing to end my time at Liverpool like this but I had a feeling it would happen. Now I need to decide if I'm going to retire or find a new club for the new season.

For the 2013/14 season, I signed a two year deal with Premier League side Swansea. I was told from the start that I was going to be a backup player but I still managed to make 20 appearances in the Premier League. Unfortunately, I only managed to score 4 goals, which was very disappointing. My best days are definitely behind me. I did manage to score 3 goals in 6 games in the Europa League though and I'm continuing to work on my coaching badges.

Now I have a big decision to make, do I drop into the lower leagues or retire from playing? I didn't play a single first team game during the 2014/15 season for Swansea and I'll be leaving when my contract runs out at the end of the season. I just need to decide what I'm going to do when that happens. I did score 2 goals in 4 Checkatrade trophy games for the reserves so I know I can do a job in the lower leagues.

So, I decided not to retire. Instead, I went back to where it all began for me in football, my hometown club Tranmere Rovers. I scored 8 goals in 34 appearances during the season but I was unable to help Tranmere fight off relegation to League One. Next season will likely be my last as a player before I look to get into management.

Joined Tranmere on a free

League Position: 22nd in League One

That's it. My playing career is over. I have decided to retire from playing at the age of 38. I only played 14 times last season in League One, scoring two goals. My aim now is to get into football management and try and prove myself as a coach. I'm really proud of what I have achieved as a player and I end my career with 226 career league goals in 563 appearances.

Retire as a player

Here is my playing career in full. Tranmere have confirmed the appointment of John Warrington as their new manager after Micky Mellon stepped down earlier in the day.

Warrington had two spells at Prenton Park as a player, scoring 33 goals in 100 appearances at the beginning and end of his playing career. He has been working with the Under 18's squad at Tranmere following his retirement from playing at the end of the 2016/17 season and has expressed an interest in management in the past.

Micky Mellon, 46, leaves Prenton Park after seeing his side fail to gain promotion back into SkyBet League One after suffering successive relegations in the 2015/16 and 2016/17 seasons. Mellon's assistant Mike Jackson has also left Tranmere.

Tranmere chairman Mark Palios said: "I am delighted to bring John in as manager of Tranmere Rovers. Whilst he lacks experience in a management role, there is no person who knows this club more than John himself. He's not only an ex-player, but he's also been working with the under 18's for the past year. Most importantly, he's a Tranmere fan and has the passion to see this club climb back up to the very top."

Warrington added: "I'm delighted to be taking over here at Tranmere and I really feel like this is a club that could far."

"Obviously the club has experienced a difficult couple of years, two of which I experienced during the end of the playing career. However, I see a lot of potential in the current squad of players and I honestly believe that we have what it takes to climb back up to not only League One but the Championship."

"I played with the likes of Steve (McNulty) and James (Norwood) during the final year of my playing career so I'm in a very good place to hit the ground running as the manager of Tranmere Rovers. I've also spent the last year working with the Under 18's so I also have a good knowledge of some of the talented lads we've got coming through."
Login to Quote

) I have full faith that you will lead them to glory.
Login to Quote

The only departure was that of Connor Jennings, who joined Alfreton on loan. I'm also looking to get rid of Liam Ridehalgh before the end of the window.

A total of five players came in during the window, all on loan as we are strapped for cash!

Goalkeeper Tom King joined on loan from Millwall, having spent last season on loan at Stevenage, who are our opponents on the opening day. Aston Villa full-back Jordan Lyden was another one to come in, he has played four times for Villa whilst they were in the Premier League. Defender Cameron Burgess came in from Scunthorpe, having made 25 appearances for them in League One last season. Another signing with football league experience is George Cooper. The winger has joined us from Peterborough and made 129 appearances for Crewe before joining them. The last signing is Birmingahm midfielder Charlie Lakin.

I was delighted with the results we achieved in the friendlies. We won 4 and lost 1, which will really help to build our confidence going into the season. The tactical style I'm looking to adopt is an attacking style so the number of goals scored in pre-season is excellent. 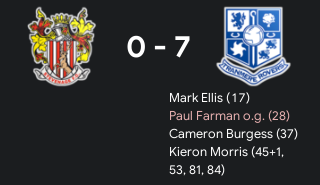 What a start to my career as a football manager. I knew we had a decent chance going into the game but I never saw us coming away with a 7-0 win. Walsall loanee Kieron Morris was on fire, scoring 4 goals. 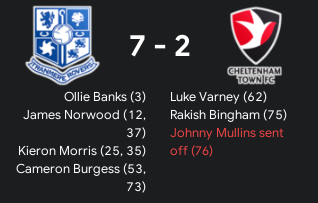 So, the game against Stevenage wasn't a fluke. Another SEVEN goals for us and another two for Morris. Incredible stuff. I was a little disappointed to see us concede two though I have to admit.

A fantastic result! We didn't have Kieron Morris for this one as Walsall didn't give him permission to play in the cups so I wasn't expecting too much. Much to my surprise, an Ismael Miller goal gave us a 1-0 win.

I honestly thought that we'd drop points for the first time this season. I hadn't banked on Ishmael Miller popping up with a winner in the last minute of stoppage time!

Gutted! We dropped points for the first time this season. In terms of shots it was 21 to us and 9 to them so I was disappointed to see us not find the net. 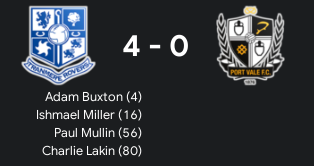 Now that's more like it. We put the disappointment of Mansfield behind us and came away with a convincing 4-0 win over Port Vale. 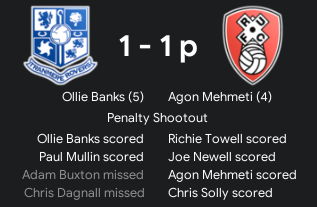 We were so so unlucky! We were more than a match for our Championship opponents but we lost out in the lottery that is a penalty shootout. On the bright side, we had already surpassed the expectations of Mark Palios by reaching the 2nd round. 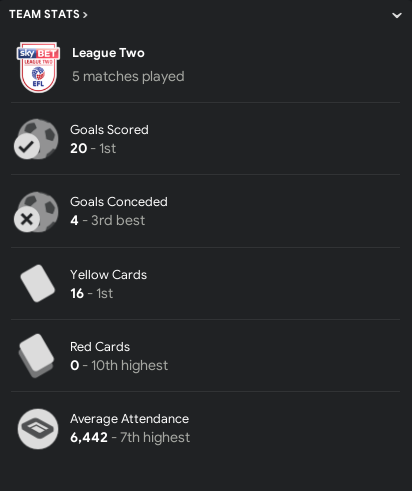 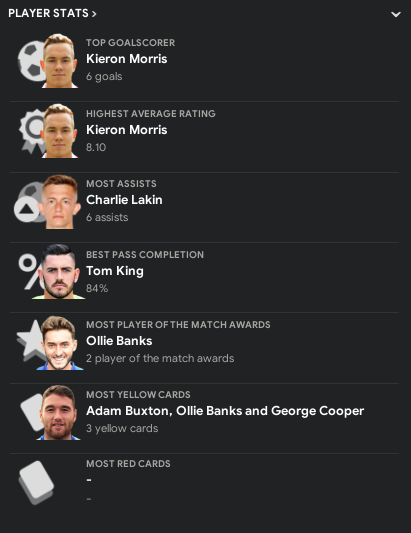