Since the age of eleven I've been playing for the club I support, my local club, Tranmere Rovers. Today, I've signed my first ever professional contract, which I'm really excited about. The hard work starts now

Sources around the club say that I'll get a change in the first team this season so I'm really excited to get going.
Login to Quote

My first season as a full professional went reasonably well up until the end of January. I was playing regularly for Tranmere in the National League, scoring 10 in 27 starts. However, I then went and broke my ankle which ruled me out for the season. I'm hoping I'll be able to bounce back by that and help Tranmere to promotion next season. 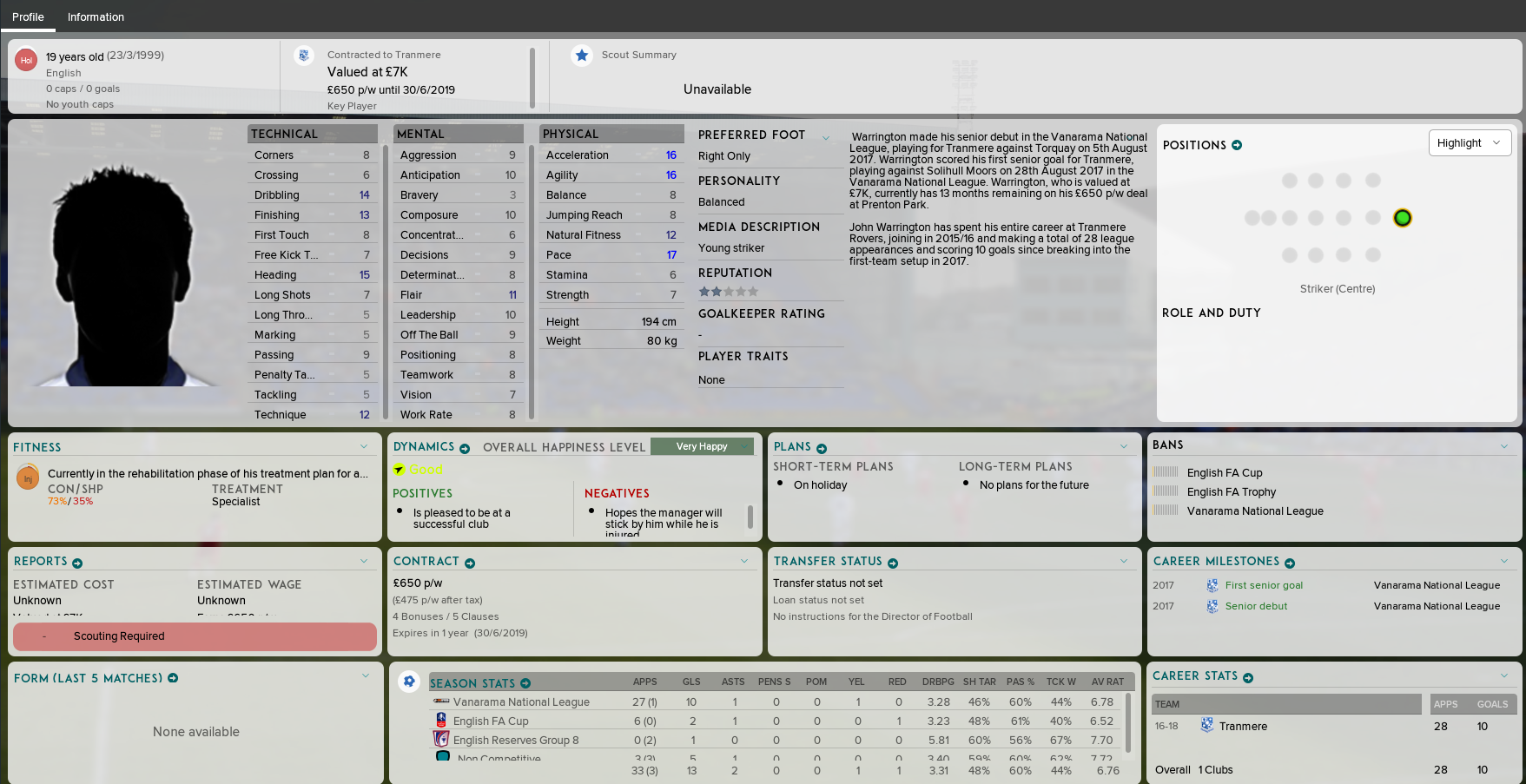 League Position: 5th In League One (Lost in Playoffs)

An interesting 2nd season in football for me. I'm no longer a Tranmere player! 13 goals in 24 games in the first half of the season convinced Leicester to spend 850k to sign me. It was a tough choice to leave Tranmere but I thought that I could further my career more at Leicester. Leicester then sent me out on loan to Coventry, where I scored 3 goals in 13 games in League One. 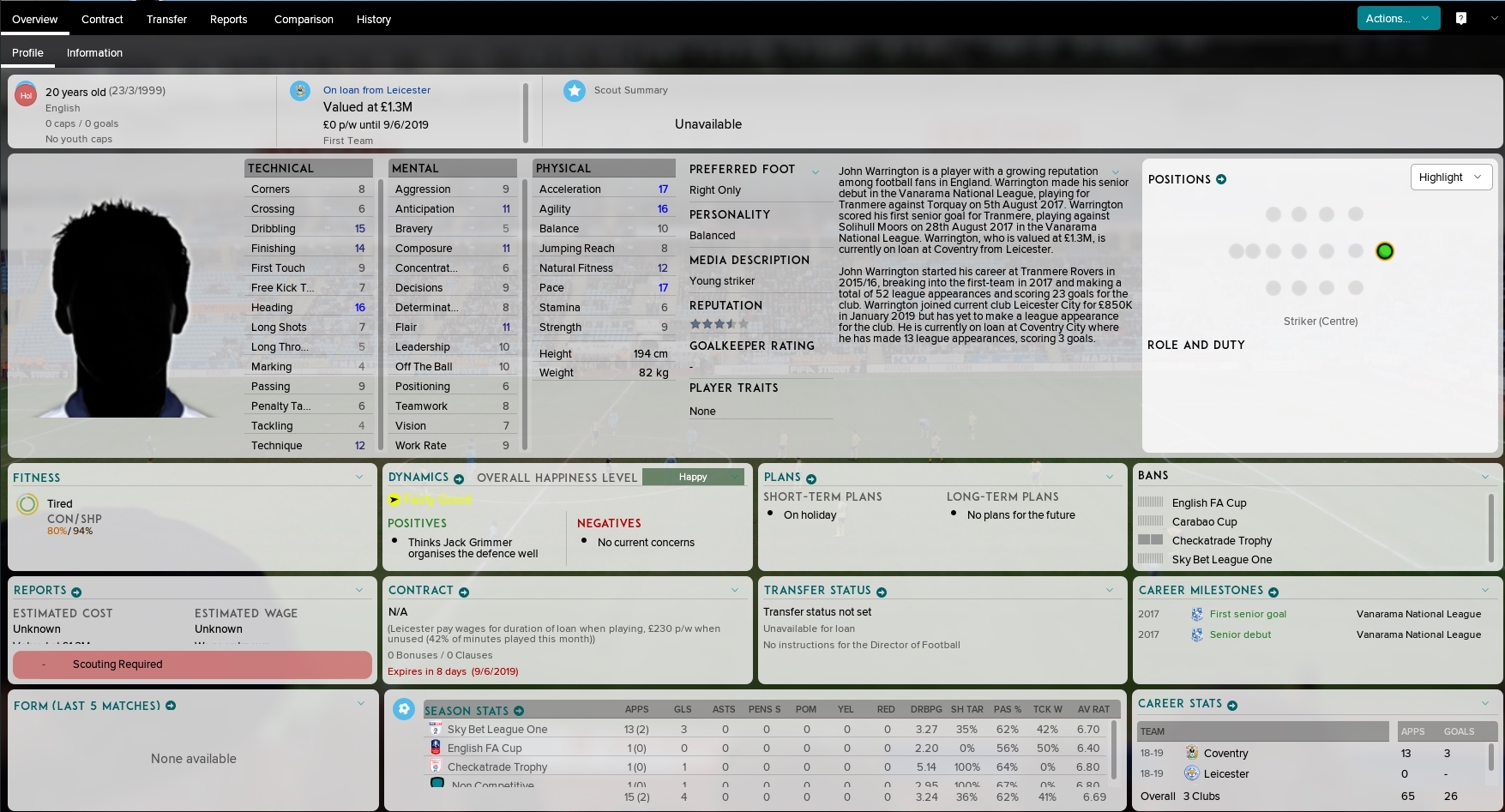 League Position: 20th in League One

The 1999/00 season saw me once again venture out on loan, this time to Charlton in League One. As a team, it wasn't the best of seasons, only avoiding relegation on the last day of the season. During the season, I scored 10 goals in 39 starts, 9 of those goals coming in League One. I'd really like to start upping my goal tally but I've got to be patient.

Another two loan spells in the 2000/01 season. This time I went on loan to Walsall and Barnsley. I started the season at Walsall in League One, scoring 9 goals in 22 games. My from saw me move up a league to the Championship with Barnsley. In the Championship I scored 6 goals in 17 games but I was unable to stop Barnsley being relegated to League One. Going out on loan is starting to annoy me, I want to find somewhere I can settle and play regularly.

League One Young Player of the Month for December

An extremely frustrating season, I'm starting to feel like my career is stalling. I only played seven league games all season, which was very annoying. I made 1 appearance in the first half of the season, finally making my debut for Leicester in the Premier League. For the second half, I was loaned out to Middlesbrough, scoring once in six appearances as Middlesbrough finished bottom of the Premier League.

On a side note, I've started preparing for a career after playing by studying for my coaching badges!

In the summer of 2002, I made a very important decision. I decided to hand in a transfer request. This lead to me making a 1.5 million move to Preston in the Championship and what a move it has turned out to be. I finally got a good run of first-team football and ended the season with 20 goals from 36 games, easily my best return. I'm hoping this is the turning point now and I can start to rebuild my career.

The 2003/04 season saw me on the move once again. This time I joined West Brom for a fee of 11 million in January. Truth be told I'm gutted about the move. I was happy at Preston but they needed the money from selling me. I scored 9 goals in 28 games in the first half of the season at Preston but only 2 in 11 games for West Brom. Fortunately, I've signed a three and a half year deal at West Brom so I have some stability at least....unless they decide to sell me.

Bought by West Brom for 11m

My best season in football to date. Whilst it wasn't my best goal return, I'm really happy with my 17 goals in 33 games. I can now say that I'm a Premier League goalscorer who deserves to be in this league. What made the season even better was that we managed to qualify for next season's Europa League! The next target for me is to continue my Premier League form and hopefully break into the England side.

Not my best goal return but I finally had a dream come true by making my debut for England in a game vs Italy! We also managed to win the Confederations Cup. My form this season in the league hasn't been great by my own standards with only 12 goals in 36 games but I managed to score 13 goals in 12 Europa League games! Unfortunately, we lost in the quarter-finals to Napoli.

A decent season overall I feel. Not my best but an ok one. In terms of goals, I scored 11 in 29 Premier League games, pretty average really. I added 9 goals in 10 starts in the Europa League. However, the main goal I scored was my first ever international goal against South Korea. What a moment it was for me and my family, who were in attendance. The season also saw West Brom win some silverware as we won the Carabao Cup, the first club cup competition I've won as a player.

ScottT
3 years
Such a unique backstory and something I don't think I've seen before!
1
Login to Quote

Thanks. That's what I was going for. Gives it a more realistic feel
Login to Quote

I'm happy with the way the season went for me. 13 goals in the Premier League and 11 in the Europa League. In the league, we finished 6th and in the Europa League, we lost to Arsenal in the semi-finals. Unfortunately, I wasn't able to add to my international appearances, I need to be finding the net a little more to regain my place I think. An interesting thing to note is that there is interest in me from Arsenal and Chelsea.

The summer of 2008 saw me make the huge decision to leave West Brom and make a return to Merseyside, joining Liverpool for a fee of 70m. A groin injury made me lose two months of the season which was frustrating but I can't have asked for a better first season at Liverpool. 27 goals in 28 Premier League games and the league title! I was also named as the Footballer of the Year and the Players' Player of the year!