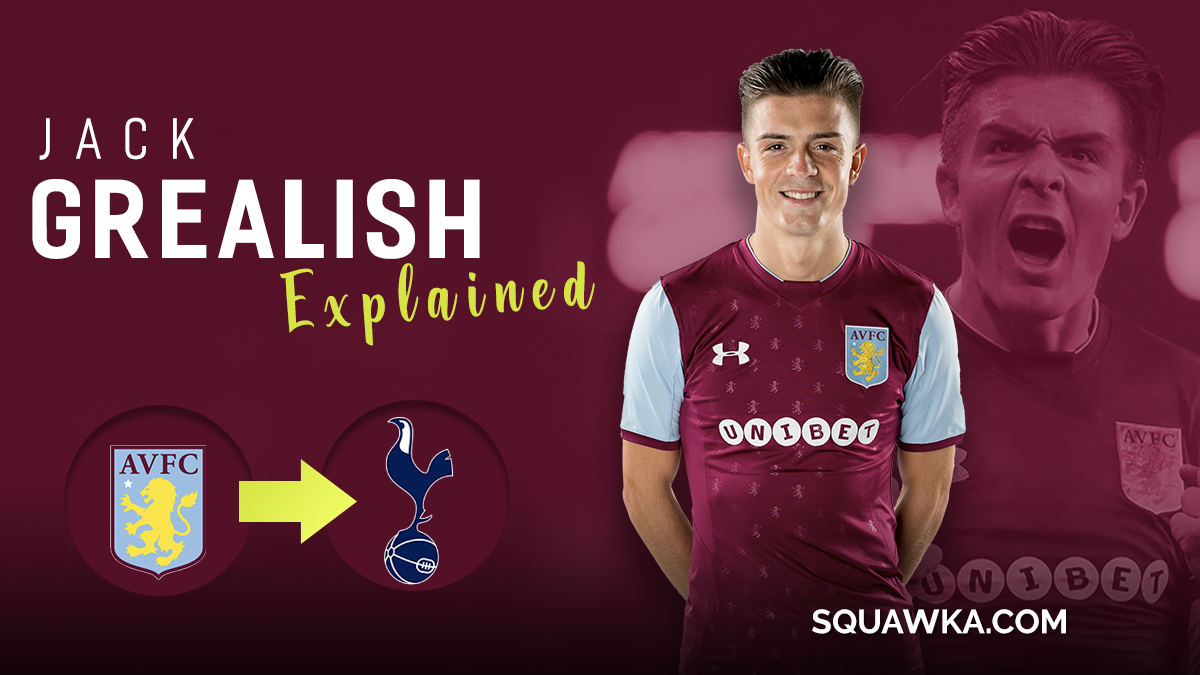 Aston Villa today confirmed the exit of Jack Grealish. The attacking midfielder had been at Villa since the start of his career and went on to make 92 appearances for The Villans, scoring 9 goals. Grealish though was more than a goalscorer as he had more assists than any Villa player over the past three seasons. Grealish moves to the capital for £32m after Tottenham failed in a bid last season on deadline day. The they would have landed him for £25m if Spurs had not waited until the last day of the transfer window. This time however they have acted fast as they know that Arsene Wenger wants to be able to buy so they swooped and they got. Grealish moves to spurs on a 5-year £74,000 a week deal which is a monumental pay rise and Spurs fans will be hoping he can drive them forward in the same way that he drove Villa forward last season, nearly winning them promotion in the process.

Villa fans are disappointed he has left but hope that Wenger gets some money to reinvest in the squad with rumours he will be given £30m of the money to spend but this is unconfirmed and the Aston Villa manager was unable for comment.
Login to Quote

mgriffin2012
1 year
Will be a bitter blow to lose him to Spurs especially for Wenger but no one is bigger than the club!
Login to Quote

ScottT
1 year
A big signing for Spurs and a major loss for Villa!
Login to Quote

Jim
1 year
It's gonna be difficult to replace Grealish!
Login to Quote 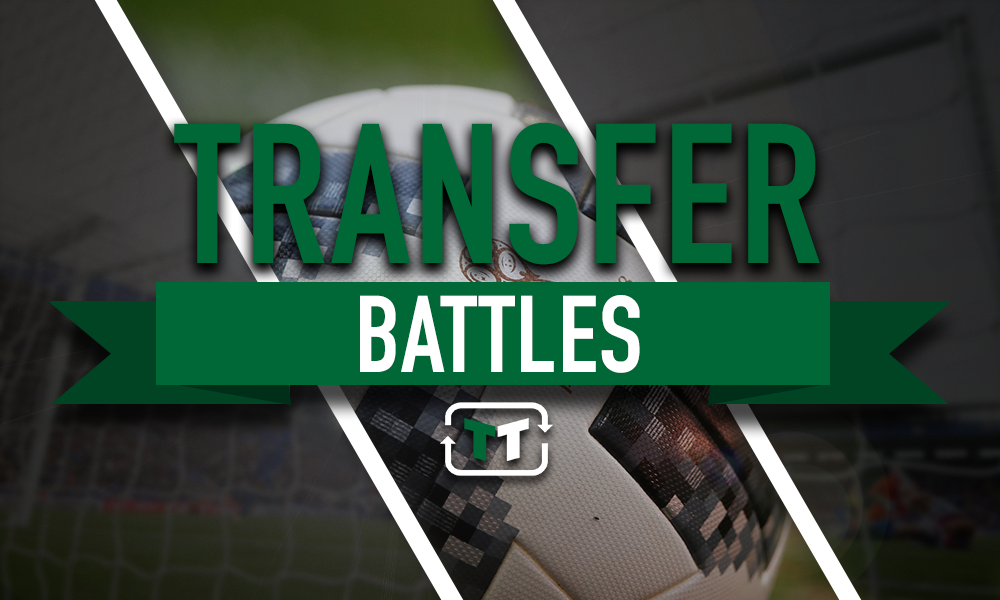 It has been a busy couple of weeks for new Villa Manager Arsene Wenger. When we said he might go into the loan market for players we were not expecting a player that was playing for a team who was challenging for the German title last season joining Villa on loan but that is what has happened as Ademola Lookman joined Aston Villa on loan.

Ademola was born in Wandsworth and went to school in Peckham where he achieved three A stars and 5 A’s at his GCSE’s.

Lookman made his senior debut in 2015, playing as a forward for Charlton Athletic of the Championship, and in January 2017 signed for Everton, who have used him mainly as a winger. He has represented England from under-19 to under-21 levels.

Everton quickly snapped Lookman up for a reported fee of £7,500,000 and made this debut debut for the club ten days later in a 4–0 victory over Manchester City, replacing Ross Barkley in the 90th minute and scoring the team's fourth goal. Lookman made his first Euro appearance for Everton in a 1–0 win over MFK Ružomberok in the Europa League third qualifying round first leg. 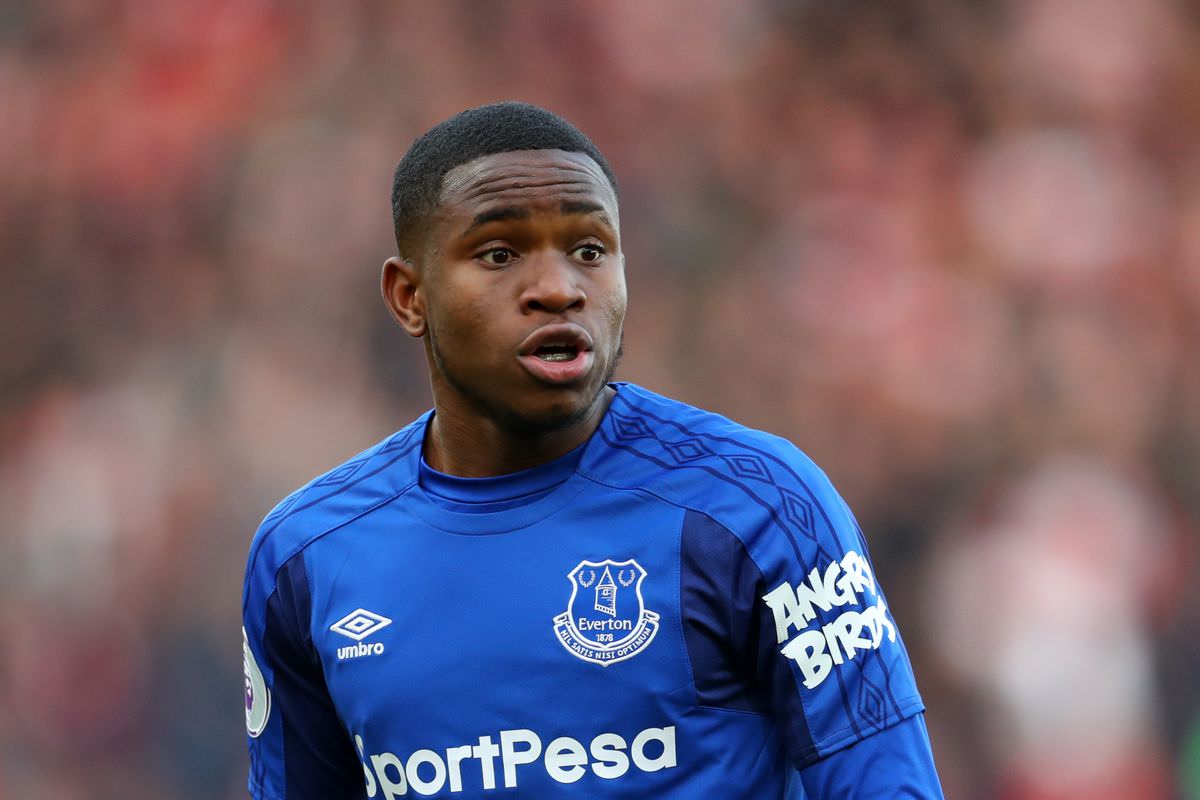 Although manager Sam Allardyce stated that Lookman would not be leaving on loan in the January 2018 transfer window, he changed his mind, and the club arranged a move to Championship club Derby County, where they hoped he would play regular first-team football. However, the player insisted on an alternative move, and joined Bundesliga club RB Leipzig until the end of the 2017–18 season. In his first game with Leipzig, Lookman scored the winning goal in the away game against Borussia Mönchengladbach after coming on as a late substitute.
Aston Villa also added a left back to there squad in Olexandr Zinchenko from Man City on loan for the season.
Zinchenko signed for Premier League club Manchester City for an undisclosed fee believed to be in region of £1.7 million. The move surprised some, however, he was described by a Russian football scout as a "real talent", with Bundesliga club Borussia Dortmund also monitoring him. 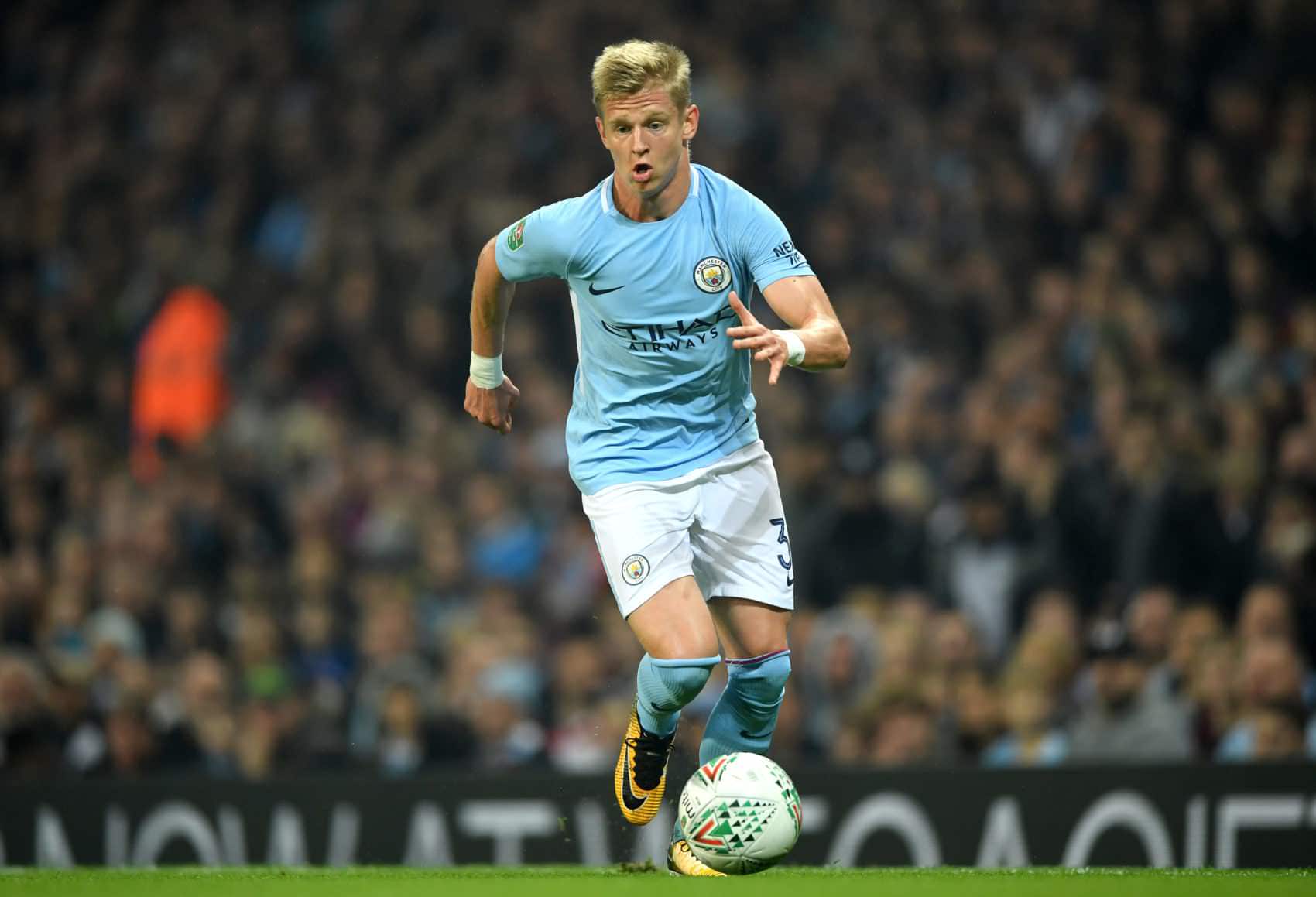 Zinchenko was loaned to Eredivisie club PSV Eindhoven on 26 August, for the 2016–17 season. He made his debut on 1 October, as a substitute in a 1–1 draw against SC Heerenveen.

Zinchenko returned to Manchester City for the 2017–18 season, and made his debut on 24 October 2017, playing the full match including extra time in a 0–0 draw with Wolverhampton Wanderers in the EFL Cup. He made his first Premier League appearance on 13 December 2017, coming off the bench in a 4–0 away win at Swansea City. Zinchenko gained an extended run in the side following injuries to left backs Benjamin Mendy and Fabian Delph, putting in a number of consistent performances in the position.

Zinchenko made his first appearance of the 2018-19 season in a 3-0 away win at Oxford United in the EFL Cup. In the same week, he made his first league start of the season in a 2-0 home win against Brighton, due to injuries to Mendy and Delph. 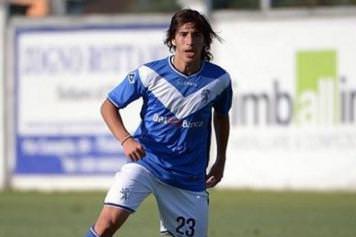 Aston Villa have paid £4,900,000 to Brescia for 18 year old Italian defensive midfielder Sandro Tonali. Tonali made his professional debut for Brescia on 26 August 2017, aged 17, coming on as substitute in the Serie B away match lost 2–1 against Avellino. On 28 April 2018 he scored his first professional career goal, in a 4–2 defeat against Salernitana in Serie B. He obtained 19 league appearances in total during his first season as a professional player, scoring two goals and providing two assists during the 2017–18 Serie B season.

Regarded as a promising young Italian player in his position in the media, Tonali is a regista, and is often likened to Andrea Pirlo – who also started his career with Brescia – in terms of his movement, coordination, technical qualities, position, and playing style. A strong, energetic, and creative, right-footed midfielder, Tonali usually plays in a central or defensive midfield role as deep-lying playmaker in a 4–3–3 formation, and shows maturity and character beyond his young age. Dictating play for Brescia with his passing in midfield, he set up two goals and even scored two himself in his 19 appearances in Serie B during the 2017–18 season 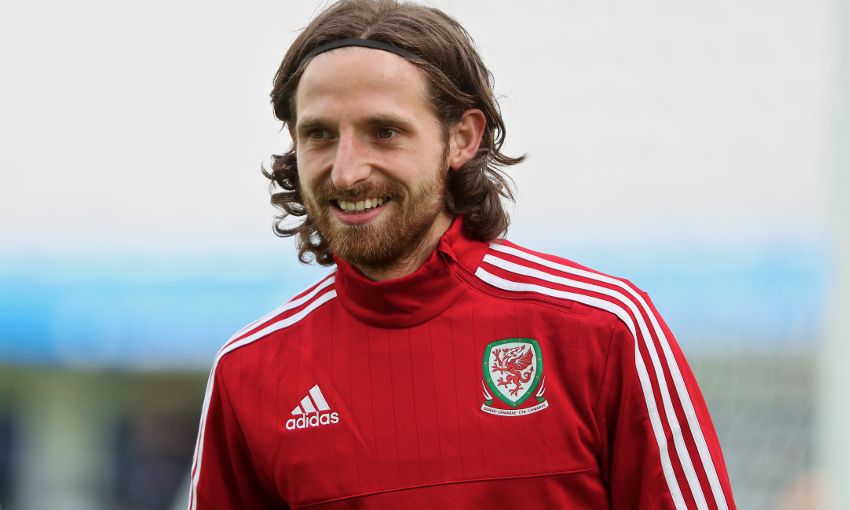 Finally Aston Villa have also spent £12,500,000 on Stoke midfielder Joe Allen. The Welshman becomes Wengers’ most expensive signing and it is easy to see why. Allen is ultra consistent and has been around a bit and is always a consistent performer who has cut it in the Premier League when at Liverpool.
Joseph Michael Allen (born 14 March 1990) is a Welsh professional footballer who plays as a midfielder for Championship club Stoke City and the Welsh national team.

Allen began his career at Swansea City, making his first-team debut in January 2007 at age 16. He played in 150 matches across all competitions in six years at the Liberty Stadium, also having a loan at Wrexham. During his time at Swansea, they won two promotions, going from League One to the Premier League. In 2012, he joined Liverpool for £15 million, signed by his former Swansea manager Brendan Rodgers. Allen spent four seasons at Anfield, making 132 appearances. In July 2016, he signed for Stoke City for a £13 million transfer fee.

A full international for Wales since 2009, Allen has earned over 40 caps for his nation and represented Wales at UEFA Euro 2016, helping the team to reach the semi-finals. He also represented Great Britain at the 2012 Olympics.
Allen is a hard-working, tactically disciplined and tenacious—albeit not overly physical—midfielder, who is capable of aiding his team both creatively and offensively courtesy of his ability to transition the ball from defence to attack effectively after winning back possession. A versatile and gifted player with a low centre of gravity and quick feet, he is capable of playing in several midfield roles. Due to his vision, composure in possession, efficient passing and ability to dictate the tempo of his team's play in midfield as a playmaker, Allen has been described as the "Welsh Xavi" and as the "Welsh Pirlo" by his former manager at Swansea City and Liverpool, Brendan Rodgers.

Lets hope Allen can replace the void left by Jack Grealish, only time will tell.
Login to Quote

ScottT
1 year
Interesting signings. Lookman is my favourite out of those, as I am a big admirer of his and think he's a good replacement for Grealish; despite only being on loan.
Login to Quote

Jack
1 year
Hmmm, interesting to see so much being spent on bringing Allen to the club, I'm sure there could have been cheaper alternatives. However, I will be delighted to see him prove me wrong!

mgriffin2012
1 year
Some very solid transfers there mate, Allen will be a big addition as will Lookman I am sure!
Login to Quote