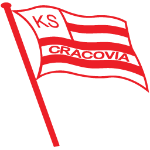 The year 2019 has finished and ended with what was a poor final 4 games of the year. We had our dead rubber in the Europa League against Rijeka where we lost 1-0 . Meaning all we had to look forward to was the draw for the 1st knockout round and its Hoffenheim that stand in our way of further progression. A tough draw and one we are unlikely to get past but so far we have shocked in this tournament and we could do it again.

Meanwhile the league saw just 2 points picked up in 3 games with another defeat to Wisla to boot. An awful showing and it sees us slip further down the league into 4th. 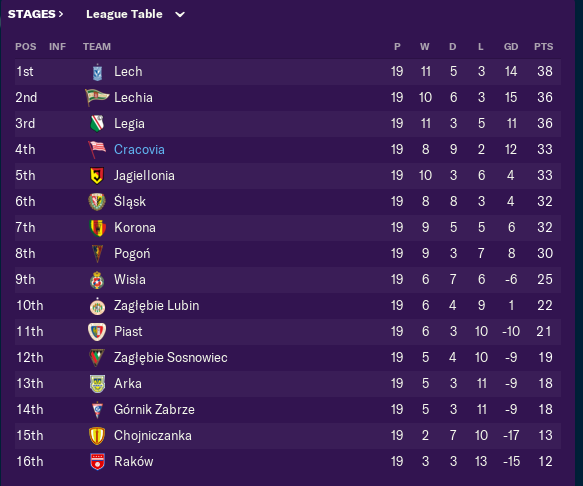 Still very much in the title fight but we have to stop drawing and start picking up a run of victories to try and take control of the league campaign. We have the ability and for January i am going to have to re-evaluate the squad as we play a host of friendlies with the window opening in February.

Looking through the squad screen the wall of 7.00+ ratings is starting to disappear and we need to have a look at how we can re-energise the squad. The obvious position is out on the flanks where our back up options are poor and don't really offer us anything should Lookman and Grandsir play badly. With both on loan, i need to find another option.

Our back up striker Vestenicky has struggled too and Hrgota is good but can be a little patchy so that is another option whilst the centre of midfield could do with an injection of quality meaning we might just have 3 new faces in the winter window.

Much to ponder as we head into 2020
Login to Quote

Griffo
12 months
How is Robert Gumny going for Lech?
Login to Quote

Ok. Not setting the world alight but looking solid enough. Screenie below

ScottT
11 months
Hopefully form can improve and you can close the gap to the top. A tough draw in the Europa League, but nothing is impossible across two games.
Login to Quote

For those that remember, January is a weird month in Poland as you take a winter break which is essentially a break from competitive football and instead a whole host of friendlies and no actual break. With no transfer window until February you also can't try and buy new players and get them ready through the friendlies.

During the friendlies, we were undefeated with a lovely victory over Hajduk and our reserve side along with nice draws against Club Brugge and Ajax showing we can at our best compete against some half decent European sides giving me some hope for the future of this save.

So onto the competitive matches and we kickstarted the year with a battling 1-1 draw with Legia which at least ensured we were not going to lose ground against this fellow highflyer. In between our Europa League matches we had an easier tie against Arka where reserve striker Vestenicky got a rare start and showed his potential with 4 goals in a 6-2 victory. He carried that form on in the final league match of the month as two goals against Zaglebie saw us win 2-1 meaning we had 7 points from our 3 league games leaving the table like this 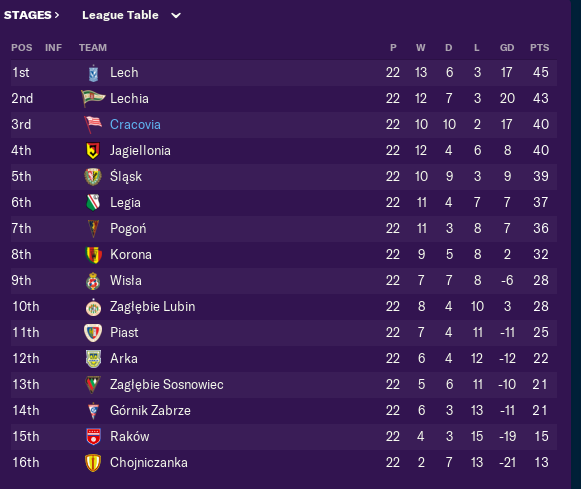 A 5 point gap continues as we head to the end of the regular season. It looks like we will finish in the top half with a healthy 12 point gap over 9th placed Wisla but we need to ensure we are within 3 points when the Championship group kicks off as that tends to be a draw fest (Well it did last season). In fact draw fest is generally how you can describe our season with 10 draws from 22 games and if we could convert just 30% of them games into wins and all of a sudden we would be top.

I will finish the on the field recap with the games against Hoffenheim. A tough tie as all have noted but we put up a great fight against the Germans. At home, in the first leg, i needed to be level or potentially ahead by a goal to have a real shout in Germany and unfortunately we conceded quite early to go 1-0 down. That is how things ended as we lost 1-0. Back in Germany we scored a goal from a corner with Datkovic to send me into raptures as we had an away goal but it was short lived as Hoffenheim scored 3 before Vestenicky scored a consolation meaning we lost 3-2 in Germany and 4-2 on Aggregate

A brilliantly enjoyable run and i just hope we are given the chance to go on another next season.

One new face was added as Dutch International Winger Jean-Paul Boetius to our ranks having fallen out of favour at Mainz. With both of our first choice wingers here on loan it was time to look at a new face on a more permanent basis for next season. Slightly slower than i would have liked but he has the dribbling and crossing skills that can cause some issues cutting in from the left. A total fee of £1.7m was agreed and the Dutchman is now in Poland.

By far the worst thing i have ever seen 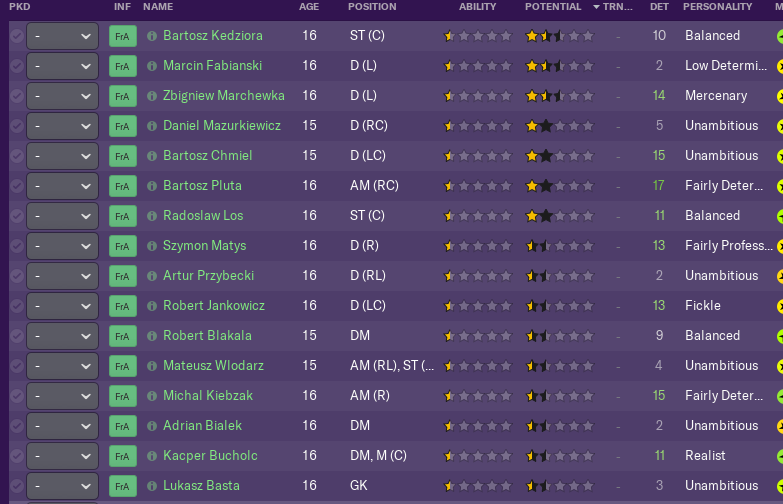 I mean what am i meant to do with that...
Login to Quote

It seems to be another season of draws. They must be more common in Poland or something! Hopefully, you can turn them into more frequent wins to close the gap. Very unlucky in the Europa League, but losing 4-2 on aggregate against a side of Hoffenheim's calibre is no disgrace.

I'm familiar with Boetius and look forward to what impact he can make in the team. Fingers crossed he will provide that extra edge you need.
1
Login to Quote

A final 8 games of the league campaign over March and April to decide whether we fight in the Championship Group for a European spot or finish the season on a lull.

Just the one defeat in the final 8 games in what was a largely positive end to the season which even saw new winger Boetius score a hat trick for the side in what was a very impressive month for the Dutchman as he adapts well to his new surroundings.

There were also big wins over Lech and Legia who were in the title fight and it means we have a very interesting Championship group where everything is up for grabs. 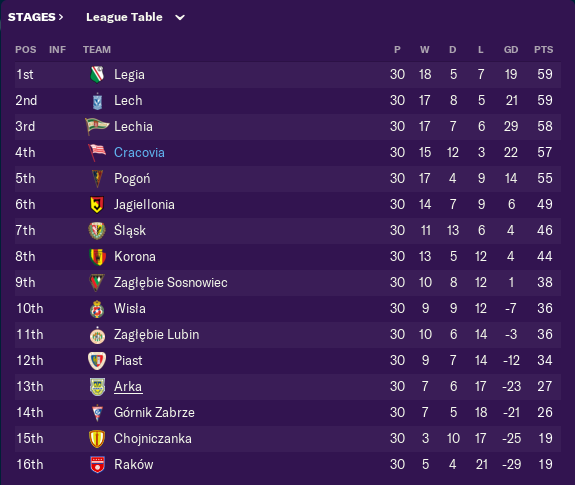 Just 2 points off the top and realistically there are 5 teams fighting for the Title and the two Europa league spots up for grabs. With everyone playing else there could be massive twists and turns yet to come.

The League has really stepped up this season as is evident by the points total. We are 5 points better off than this time last season yet find ourselves in 4th. In fact we are only 7 points off the total points total that won us the league last year, which to me only highlights how weird my debut season was.

Can we do it again and take an unlikely title? Only time will tell....
Login to Quote

It is going to the last day of the season again as we go away to Lech in a match to decide the title. A draw should be enough due to our superior goal difference so for once i am hoping to draw for the 15th time this season.

Nerves are shredded
Login to Quote

Let's just cut to the chase. Did we win the league for a 2nd consecutive season? That is the question you are all waiting for the answer on. Well i hate to disappoint you but...

We absolutely fucked the final game against Lech losing 3-0 having gone down to 10 men. A killer of a blow but we did secure 2nd meaning we have Europa League football to look forward to next season. To be fair, it wouldn't be fun if we just won the league again.

Still even though we have just the Supercup to show for the season, it has been a good year. We picked up 7 more points in the league than last season and finished with the least defeats. A decent Europa League run that saw us get to the knockout's with some great performances against Lazio and Zenit showing we can compete if we want to. All in all a good season and if anything it shows that our title win in the 1st season was similar to Leicester's a few years back. The big teams had a rare flounder and we capitalised but we are going to need to be stronger if we want to win it next season.

We had 3 players in the League's team of the year with another making the bench. It is a decent showing and Alexander Hack was unlucky not to be voted the leagues best player as we was superb last season. A great signing for us and i loved the fact he was able to play out from the back. Branimir Hrgota was also the league's top scorer in his first season with 17 goals (23 in all competitions) and it was enough to get him into Sweden's Euro2020 squad as well.


Team of the season

Well it is time to rebuild. The board have allocated £4.5m in transfer money and an extra £27k per week for wages and with that we can probably get around 3-4 players to bolster. With Lookman and Grandsir on loan, i will have to either look at bringing one of them back and/or add to my wing selection. Serder Serderov is going to leave on a free meaning we are very short in this area.

Hack's brilliant performance at the back has me hankering for another ball playing centre back whilst veteran Janusz Gol is leaving so another central midfielder wouldn't go amiss especially as i might sell Budzinski as well.

So that is the plan, but we have a number of our players linked with bigger clubs and we might just get picked apart. So far we have Keeper Hadzikic, centre backs Hack and Datkovic, Midfielder Dabrowski and Branimir Hrgota all being targeted.

It could be a very interesting summer indeed
Login to Quote

ScottT
11 months
That's a shame, but it gives you something to strive for next season. A decent transfer budget to improve too, so hopefully the right additions can be made in order to achieve your goals, both domestically and in Europe.
Login to Quote