ScottT
1 year
Not exactly the month you'd have liked, but you still remain top. A huge chance to cement your place missed though - could it cost you? I dread to think. Hopefully not!
Login to Quote

Jack
1 year
It's certainly not the form of a top of the table side, but you are still marginally at the top. The form needs to be settled soon, though. Good luck!
Login to Quote

Justice
1 year
Very big month ahead of you to try turn the form on its head. The league is out of your hands if Valerenga win all of their games. You can still be proud of this season, whether you win the league or not. Significant strides forward have been made.
Login to Quote 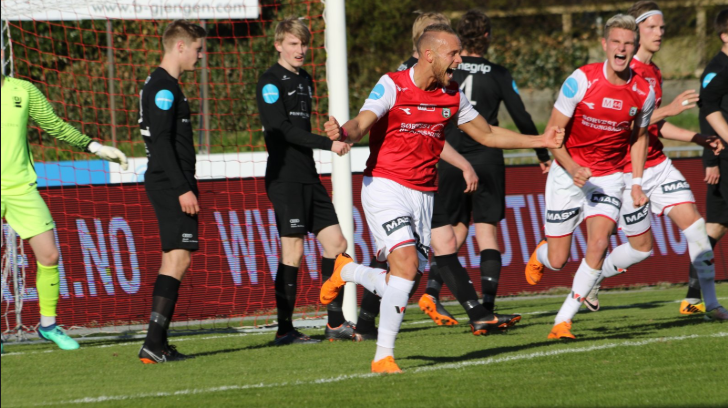 Bryne have today secured their promotion to the OBOS-Ligaen, Norway’s second tier. After an incredible start to the season, a wobble from July to September saw many fans worry that they had thrown their chances away at one point losing their spot at the top of the table. However, after victory today against FK Vidar, Olav Berg has taken Bryne to promotion with a game to spare in his first full season in charge of the club.

Berg who had said he wasn’t paying any attention to the possibility, before the game, and was focused on a good performance. A performance he got with Bryne fully in control restricting Vidar to just a single shot on target. On loan striker Einar Aadland gave Bryne the 1 goal victory scoring in the 53rd minute sealing promotion for the side who were predicted to finish 6th.

Bryne manager Olav Berg had this to say after the game, “I am very proud of this team, when I took over just 15 months ago, we were sat in a relegation battle and to come out of that and finish 5th last year, I was always confident in the side. I obviously made some additions this year adding the likes of Besim to the team however the majority of the team is the same one I picked up last July. We will obviously be looking forward to next season but first we want to finish the year on a high and secure the title.”

Bryne will have a lot of work to do in the off season with a squad that at times looked weak and lacking in goals, to stay in the OBOS-Ligaen improvements will have to be made. However, Berg seems to have other thoughts, “Of course we are always looking for ways to improve this team. We had the top scorer in the league in Omar last season but that didn’t stop us from adding Einar on loan as we believed he could help us out. We wont rest on our laurels and I am certain a few additions will arrive, but don’t be surprised when you see the majority of this squad stick together.”

For his team to stay together Bryne are going to have to conclude some contracts as several players are out of contract come December. Fullbacks Petter Havsgård Martinsen and Bjarne Langeland alongside goalkeeper Igor Spiridonov are among 7 players set to leave. The uncertain finances of Bryne may be in the way of tying certain players down and it will certainly be interesting to see what occurs at the Bryne Stadion over the coming months.


SOA: This run in felt a lot like the Top 4 run in irl, nobody seemed to want it!
Scott: Hasn’t cost us promotion thankfully! Still the league to play for though!
Jack: Thankfully that great early season form has helped us with promotion, it may well cost us the league though.
Justice: Promotion shows just how improved things have been this year and thankfully despite this poor run we have managed to secure promotion which was the goal at the start of the year!
Login to Quote

Jack
1 year
Superb season mate. Going from where you picked them up from at the beginning of your reign to where you are heading next season is nothing short of remarkable and most certainly well-deserved! You should do a little insight into the finances going into next season given that you will no doubt need some better quality next season.
Login to Quote

You are reading "A Norwegian Adventure".