Liverpool football club is folded after the 2016/17 season. The owners of the club have admitted that they cannot cover the finances to run the clubs after old debts made by Hicks and Gillet.

The supporters now find themselves in a limbo of which they no longer have a club to support. This event means the fans will have to turn to the non league clubs located in the great city.

All players have been released by the club and are no pursuing a new career path in football. Many star players are off to some of Europe's biggest clubs like Manchester United, Real Madrid, Barcelona and Juventus.

Meanwhile, in Liverpool, their neighbours Everton are now missing their biggest rival and the anticipation of one of the world's biggest derbies - the Merseyside derby.

Anfield is now being knocked down to just a normal football pitch to be used by the public. Melwood is now set to become a gym with it's brilliant facilities.

Jurgen klopp in now unemployed and ready for any potential managerial jobs that require experties such as the passionate German's.
Login to Quote 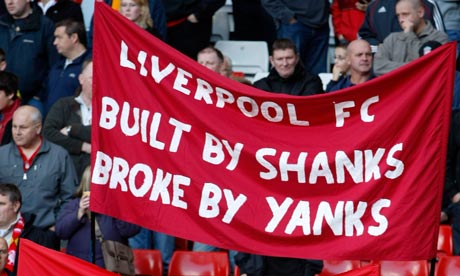 jimmyquinny79
9 months
but weve conquered all of Europe and were never gonna stop!!!!!


and we are also going to madrid hahaha
Login to Quote The Liverpool supporters group spirit of Shankly has announced that they are attempting to reform their precious Liverpool.

It has been almost a year since the liquidation of the Anfield club. The Spirit of Shankly met in the Sandon and have come up with the idea of forming a phoenix club that can rise to the top.

There is many things needed to be done in order for that to happen:

You are reading "Liverpool - We go again".