ScottT
1 year
You gave it a good go in the Champions League. You were put against some of the best opposition you could have faced from each pot of the draw, unfortunately. I think recording six points and a victory against Juventus is a real positive to take away regardless, though. A tough run of form in December is far from ideal and it puts an end to your Carabao Cup bid. Hopefully you can return stronger in the new year and look to push back into the top four.
Login to Quote

Our Director of Football, John Ruskin has signed his 2nd player, 17 year old U21 French International Striker, Christophe Fernandez from Rennes. He is a newgen if you haven’t heard of him. He will likely be loaned out for the remainder of the season.

There are no outgoings planned but as ever, it depends if PSG are bored with their current squad. Incidentally, Spurs have sacked Pochettino and I’m in the running for the job. A quick scan of the squad suggests they have sold all their full backs inexplicably and Alderwireld and Vertonghen are playing there. Random. I’ll expect more bids for Chilwell et al in the near future.

On the pitch we had the following games:

We played a much changed side to the Brighton loss giving some fringe and youth a chance. They certainly took it and we were worthy winners. We didn’t play as well as we had done against Brighton but took our chances. 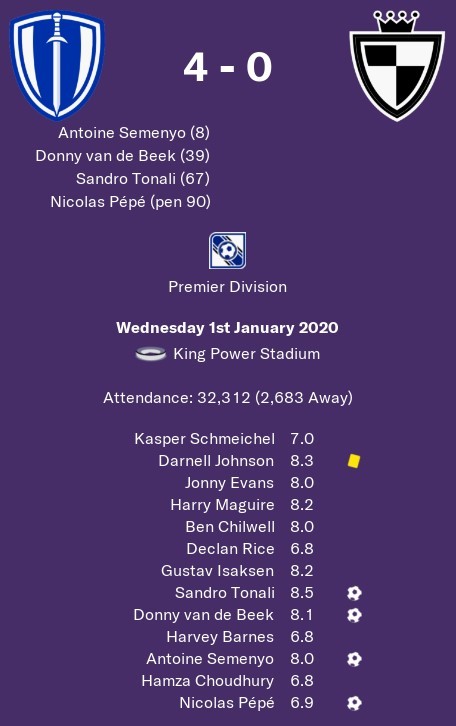 MOM Sandro Tonali who is really starting to find his feet.

I picked the same team bar one player for the following game with Marin coming in for Barnes and once again it was excellent against Championship Swansea. That man Tonali with another goal and a MOM performance. Through to the next round of the cup against Watford at home. 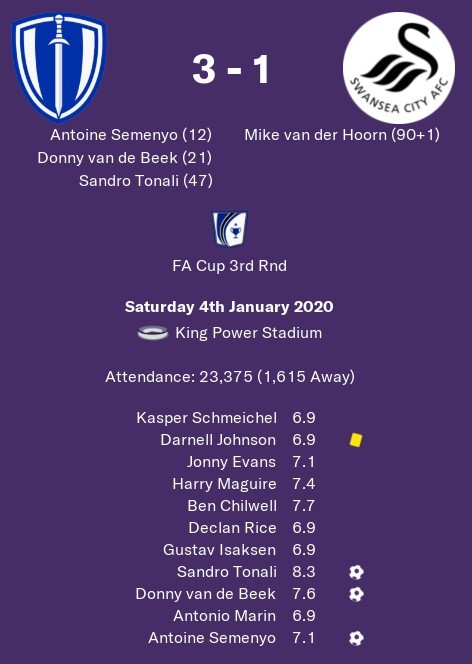 So it turns out that 3 games in a row with these payers was the limit. Our young side was blown away by Spurs and specifically Lucas Paqueta. Alderwireld and Vertonghen at full backs, and they provided 2 of the assists, what do I know? Darnell Johnson particularly suffered. 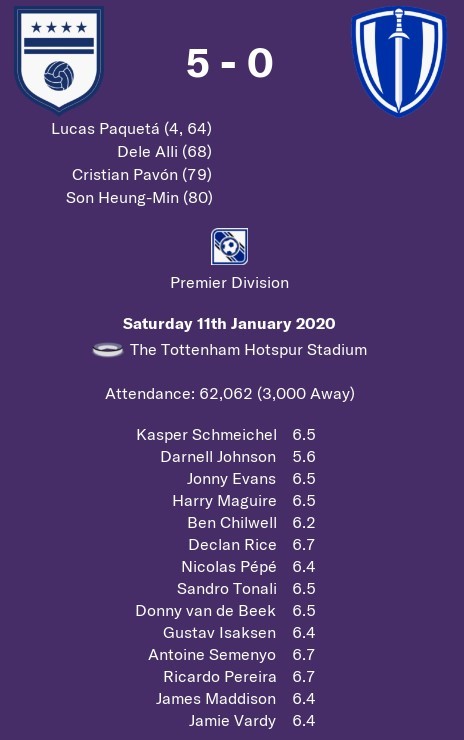 Next up was Newcastle at home.

Marin opened the scoring, Muto equalised. We need a lift, perhaps the cup will help.

A pretty even game. We can’t hold a lead at the moment though which is becoming frustrating.

van de Beek opened the scoring but Joao Pedro made it all square in the 2nd half. 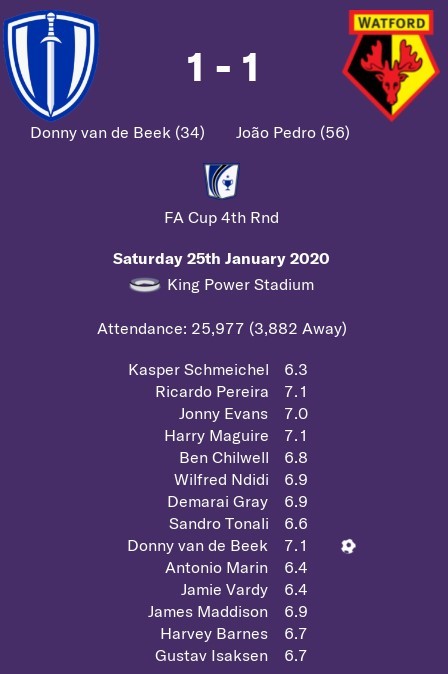 Donny was our MOM for his goal. We’ll go back to Watford for the replay in February.

We played Watford in the league just a few days after the FA Cup game. Adam Idah with a brace for Watford. Maddison with our goal but we were dominated in truth. 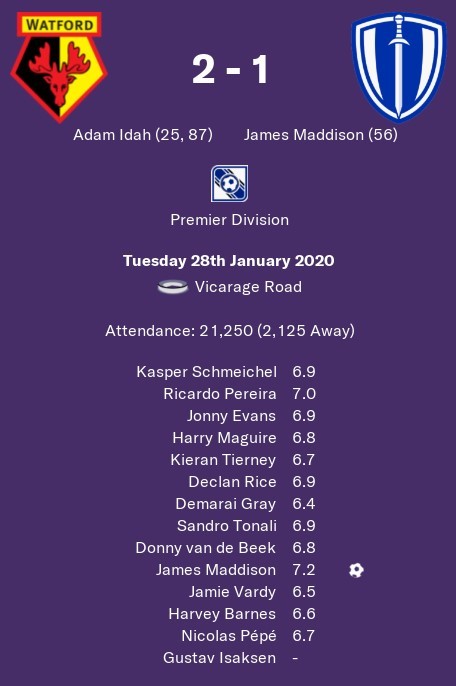 Back to the King Power for the visit of the Saints.

We picked up where we left off in truth. Morale is quite low in the squad after a tough couple of months. The 1st half came and went without incident. All of a sudden, we were 2-0 down and staring at a 7th defeat in 9. Enter Antonio Marin who saved us with 2 lovely finishes. We’ll happily take the point after that. 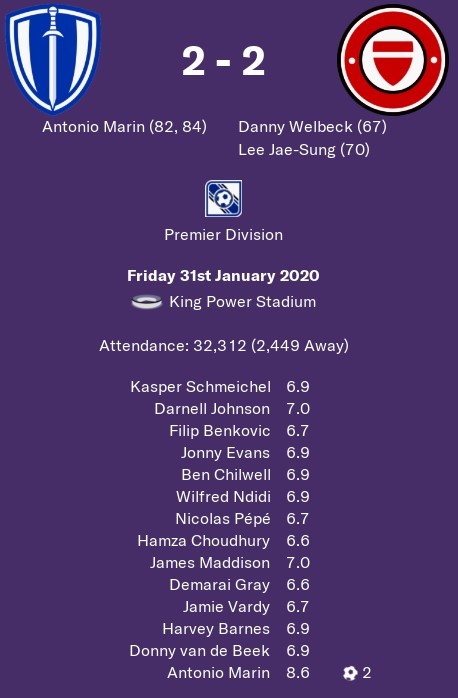 January Review – A real mixed bag again but we are still in the cup for now and added a few points to our league total. Player of the month is Sandro Tonali, a real talent with a bright future. We find ourselves in 6th after 25 matches. Liverpool top the table looking for back to back title wins.

We start February with the replay of the FA Cup 4th Round away at Watford. Then 4 Premier League games, 3 of which I’m hoping get us back on track in the league. Then a trip to Anfield. Can we get lucky there again?

Bit of deja vu. Watford again pretty dominant and we found ourselves 2-0 down. Vardy got a goal back but we struggled to deal with their front 2 for large parts. We had plenty of attempts towards the end of the game but it wasn’t to be. 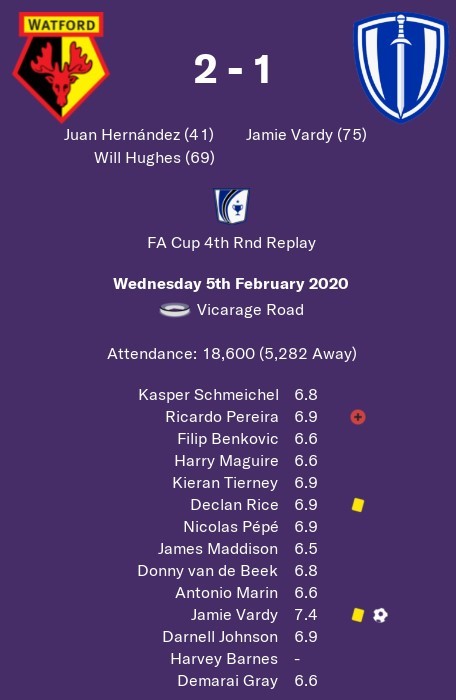 MOM, Vardy for actually finding a way through.

We took 5 points from our next 3 games, disappointing as we should have been aiming for 9. Both Blackburn and Burnley scored late, late equalisers. Onto Liverpool. Here is the table as is. 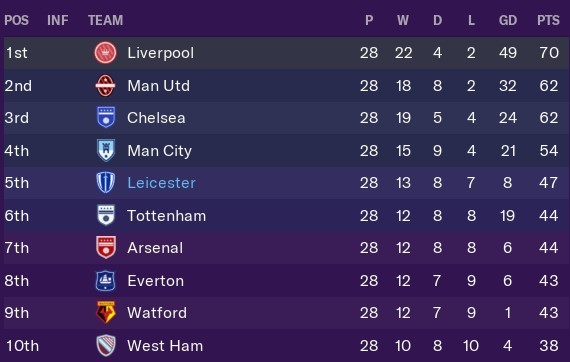 Need to beat them to keep the league alive by the looks of it. Stoke won the League Cup, again against Bournemouth.

In spite of Leicester not being as free scoring, Vardy is doing fine.

Liverpool haven’t lost in the league since early December away at Arsenal but we do have a good recent record against them.

Schmeichel got injured again so Ward would be in goal.

Liverpool picked virtually a 2nd string and were far too good still. By the time we’d had a shot Liverpool were 1-0 up and cruising. They added further goals as we pushed forward and Pepe got a late consolation goal.

February Review – I’ll be pleased when the season is over. The players seem to have lost interest. Vardy is player of the month and at this rate will be our player of the year.

Here are our stats after February.

At least March is easier…

City up 1st at home. I am keen for us to get back to winning ways so we hold a team meeting which goes well. Lets see if it helps.

Pepe got both goals, the 1st was a great counter attack from a City corner by Pepe and Vardy. He added his 2nd from a nice header from a Chilwell cross. A great win in an even game.

Top 4 might be beyond us at this point but without that win City would’ve been 13 points clear. We reduced the gap to 7 with 8 games to go.

It’s really hotting up. We are only 6 points ahead of 10th place. Every time I look Spurs are battering someone too. With Stoke winning the League Cup and no longer being in the FA Cup, those Europa League spots might be a bit higher in the league.

Guardiola gets the Tottenham job to make things easier.

Chelsea away next and they are realistically the main threat to Liverpool.

We lost 1-0 on a day of few chances. A game so tight, even the goal wasn’t clear cut. We’ll move on to Arsenal.

A quick check on the transfer list sees Arthur (Barcelona) and Lukaku available. Perhaps some business we could do if the finances are right. Also Ruben Loftus-Cheek of Chelsea is available.

Schmeichel is back in training but Ward is playing well so he may not come back in right away.

A fantastic win for the boys and we take 6 points out of 9 in March against some serious opposition. Maddison scored a brilliant free kick just before half time. Reiss Nelson pulled one back after a bit of pressure from Arsenal. Kelelchi Iheanacho climbed off the bench to nick it after a great Tierney cross. Tierney MOM.

March Review – A really pleasing month in spite of the loss to Chelsea. Pepe player of the month after his Man City display.

We stay in 6th for now with Spurs and Everton breathing down our necks, it’s going to go down to the wire. I notice we play Everton at home on the final day. Antoine Semenyo is doing well on loan at Preston and wins The Championship Player of the Month. 3 goals in 3.

See you all later for the final 2 months of season 2.
Login to Quote

ScottT
1 year
Some initially disheartening result, both in terms of the league and an early exit from the FA Cup. However victories against Manchester City and Arsenal could be vitally important for your European hopes, in which seem to be via the Europa League, rather than the Champions League. Despite a less impressive year in comparison to last season's heroics, you are doing a stellar job. Vardy seems to be capable of banging in the goals, despite his age. He could be playing to a high-level for many more years, it seems!

Jack
1 year
A fairly incredible season this far! European football looks like it may well be returning to the King Power! Vardy also in good form despite him getting on a bit