SirBlastelot
1 year
When loading shortlist from ingame to GS it returns empty.

Game and GS have admin rights and restarted both to see if that would solve the issue. 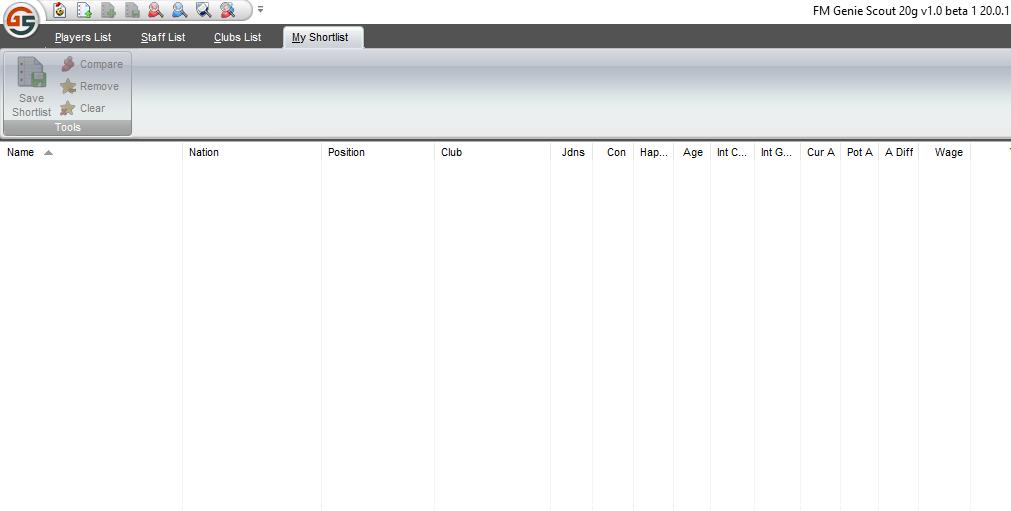 rhythm
1 year
Same problem for me and it is annoying :(. Hope you can find a solution for it...
Login to Quote

iwabik
1 year
Same here, although it seems to work sometimes.
Login to Quote

Hailfire101
1 year
Same here, works sometimes. But most of the time, nothing loads.
Login to Quote

iwabik
1 year
Any news or fixes?
Login to Quote

shikharg3
1 year
I had the same issue, here's what I did (thanks to the tutorial in the app).

You need to have the shortlist opened in FM. Then when you click import shortlist you'll see the players in Genie scout.
Login to Quote

trainz77
1 year
I also had that issue, I did two things that have seemed to solve that problem, so don't know which of those did the trick

What I did was unticking "Use caching to decrease page loading times" in preferences, after that I also reloaded the skin and it worked, I didn't restart Genie Scout or FM it was working right after this.

Might also just have been lucky, although I tried to load it about 20 times with other players, other shortlists without success.
Login to Quote

stortfordblue
1 year
I'm having the same issue. The above workaround worked for me at first but no longer seems to.
Login to Quote

iwabik
1 year
Any news from developer?
Login to Quote

stortfordblue
1 year
I think it's something on the game's end rather than GS as the workaround mentioned above as well as quitting FM & restarting both seem to solve the issue at least some of the time.

An ideal solution would be for GS to load saved shortlist files I think.
Login to Quote

Any advice on how to remedy this?
Login to Quote

god_
1 year
Is easy to get money , not easy to fix a problem of the tool........ shame. I will open a problem in my bank to get my donation back i can not use shortlist so this tool is a zero to me.
Login to Quote

The shortlist has some issues which are being caused from both ends, there have been updates to GS specifically mentioning fixes aimed at the shortlist.

Sometimes just enabling the cache and then disabling it again ingame,let's the shortlist be loaded.

Ever since the fm beta came out there have been multiple fixes for gs, but the guy making the tool also has a normal job as a programmer. So sometimes it might take a little longer for a new fix and it also differs per test/try wether or not a shortlist gets loaded.
Login to Quote

Spoonface
1 year
Update and shortlist still doesn't work think I'll be contacting the bank for a refund also, losing faith in GS if i'm honest, yes the guy has a normal job, but if people are donating sorting the shortlist problem is also his job.
Login to Quote