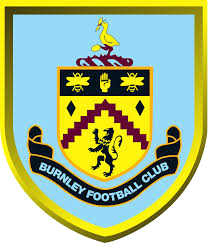 Season 2: The Squad Clear out

With Season 1 in the bag it was time to have my first proper squad clear out and to build a team that could start challenging for the top half of the table. I have to say it was a frustrating pre-season on the transfer front as we consistently got beaten to the punch on a number of players with the rest of the Premier League and even the Championship in cases more appealing than dear old Burnley.

However, we still bought in 7 new faces for the first team this season with one more player being bought with the future in mind. Annoyingly my staff signed someone for the U23's as i couldnt for the life of me find the staff responsibilities tab and stop it in time. However, i think the squad looks much better and certainly a tad younger than before too.

First out of the door was Joe Hart as he was moved on to Derby for £3.5m with the Rams taking on most of the wages as well. A big relief on the wage budget with Bailey Peacock-Farrell now officially becoming the No.2 for the season. Another poor keeper in Adam Legdzins was moved on to Scunthorpe in a deal for just a few thousand. We also released Aaron Lennon, Kevin Long and Nakhi Wells freeing up all of their wages.

It didnt stop there as Ashley Westwood was sold to Cardiff for £3.4m again freeing up wages and moving the 30 year old on the Championship which is much closer to his ability level. Robbie Brady was sold to Mexico and Monterry in particular for £10m with the main reason being he was 30, on fairly large wages and not going to be a regular. Ben Gibson followed Joe Hart to Derby in a cut price £6m deal and was by far the worst sale i did as we really should have got more money for him. The final outgoing saw Jimmy Dunne go to the USA on loan to try and get his ability up so he might just be able to compete for a place in the future.

All in all not bad and basically everyone we tried to move on did but also we boosted the coffers a bit to help us get a few new faces in. The first signing of the pre-season was the only one i did not buy myself as the backroom staff signed Tom Grivosti from Ross County on a free transfer. He is young so i will give them that but looking at him he isnt going to make the grade and the fact they only signed him on a 1 year deal says it all really. He will sit in the U23's before getting released at the end of next season.

So with that out of the way, lets get to the real business. We were in desperate need for a right back having sold Bardsley in January and with Matt Lowton in his 30's it was imperative we added someone young. So welcome Valentin Rosier who joins from Sporting Lisbon in a £8m deal. A former French U21 international i think he has the right qualities, plenty of years of potential left in him and should rival Lowton for that right back spot. Portugal was the hunting ground for my second purchase as the value for money was perfect and we added in Brazilian Carlos Vinicius from Benfica in an £8.5m deal. A tall strong powerful striker he will give us another viable option should Chris Wood get injured but also give Burnley some Brazilian magic. Annoyingly i couldn't register him for the teams tour of China (Partly a bug but also he was called into the Brazilian national team) and i have high hopes for Vinicius.

Now onto some potential bargains. Ruben Pardo joins on a Bosman having had his contract expire at Real Sociedad. I like this Spaniard and we now have a creative force in the midfield and if his pre-season is anything to go by we have someone who can be a danger from set pieces. Burnley has never had such flair and style! Adding to the style element, Gabriel Martinelli has joined on loan from Arsenal for the season with just his wages being paid by us. I am a massive fan of him in Real life and he gives us another option in the forward positions and out on the wing. No one will be able to accuse us of being one dimensional this year with the signings so far.

With the forward lines and midfield getting a boost it was time to work on the defence. With Kevin Long and Ben Gibson both being sold we needed two centre halves. So we raided Swansea for young Joe Rodon who joins in the biggest deal of the summer for us in a deal worth £15m before going to recently relegated Brighton to sign Lewis Dunk in a cut price £10m sale. Not done there we added Lazio's Riza Durmisi to provide us with another option at left back in what was a bargain £3m.

That was all of the first team buys but we had time to add in one signing for the future with Romanian Louis Munteanu joining in a £3m deal. A young striker with International experience already, i have sent him out on loan straight away but expect him to feature next season as we continue to reinvent this Burnley squad.

So who do you think was the best signing?
Login to Quote

Griffo
1 year
Joe Hart's decline is really sad to see... I like the pick up of Lewis Dunk, really enjoy him as a player
Login to Quote

ScottT
1 year
Hugely supportive of the Rodon signing. Rosier is an excellent signing though, one that will perhaps be underrated by the majority.
Login to Quote

TheLFCFan
1 year
Some great deals in there, I particularly like the Dunk deal as a favourite moment is raiding the relegated sides! Looking forward to the season ahead.
1
Login to Quote

Jack
1 year
The signing of Dunk is a great deal for a solid, British defender. A good summer of spending seemed necessary but you've also got some decent fees in departures!
Login to Quote

With the squad evolving into pre-season into something more like what i wanted it was time to see how it did on the pitch. Pre-season saw us go to China to show off the famous footballing brand of Burnley and it proved to be a mixed bag with a 1-0 defeat followed by two high scoring victories before struggling to a 2-2 draw against the weakest side of the lot. Two 1-0 uninspiring victories capped off what was in the end a relatively positive pre-season but one that was a little disjointed. It didn't help i ran into a bug where i couldnt register Nick Pope and Carlos Vinicius for the China tour meaning Pope got pissed off with me and the big Brazilian struggled for match fitness right at the start.

Going into the season opener, much was made of our poor form having flopped in the final few games of last season once safety was confirmed. So facing League Champions Liverpool probably wasn't the kindest of games to kick start the season and it proved a horrid first test as we lost 3-1 in a game we conceded 44 shots on goal! The one bright spark of the match was Carlos Vinicius scoring on his debut to briefly put us on level terms. We then took on Bournemouth and conceded within the first minute and we looked like going down to a second defeat of the season before Chris Wood banged in from a Lowton cross to level things in the 93rd minute. Still we were without a victory and i could sense the tide was already turning against me with some comments in the media about not changing things up. However, i persevered and in our very next game we beat Everton 1-0 with Chris Wood scoring the winner before following that up with a 1-0 win in the Carabao Cup with Aiden O'Neill scoring the only goal of the game. August finally finished with another 1-1 draw against Leicester as Chris Wood scored his 3rd of the season levelling after Jamie Vardy gave them the lead.

It meant going into September, we were above the relegation zone but still struggling to force ourselves into games as we were largely outplayed for large periods. Something that didn't improve at the beginning of the month as we were beaten 1-0 by Watford and 2-0 by newly promoted Leeds in what were very poor results and really started adding question marks to the long term stability of this save. A quick team talk saw us rebound in the Carabao Cup with a 3-0 win over Rotherham before beating Huddersfield 2-1 in the league having come back from 1-0 down with Carlos Vinicius scoring the winner. 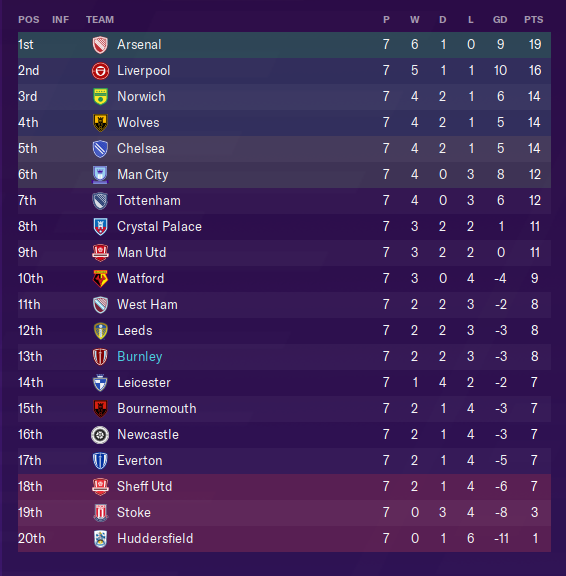 As you can see it is an incredibly tight league with just 2 points separating 10th and 18th as we desperately need to get in a run of form. My main worry is that we havent played many of the Big 6 yet and that will come and hurt us at some point. I am also thinking about a formation change. For one we have at least 3 decent centre backs and i want to give all of them game time and i want to play Wood and Vinicius up top together as both are scoring and we seem to do better when both are on the field at the same time. So i am going to dabble with a 3-5-2 formation of some sort. More on that in the next update as i experiment.

So how are we doing? Well below is what the board think in what is largely an on par performance with nothing massively to worry about. How about you guys?

Jon84
1 year
This thread has inspired me to do the same and I have just taken over West Ham. Look forward to following!
Login to Quote

Great to hear and a much luckier team choice than my own. Keep us updated with how you are going
Login to Quote

ScottT
1 year
A mixed bag so far. Hopefully improvements are to come.
Login to Quote

TheLFCFan
1 year
An ok start to the season, after a tough pre-season. Midtable would be a nice place to end up if you can't quite push on, especially if you can go on a nice little cup run!
Login to Quote

JT
1 year
Fallen out of love with the save and FM in general. This story has run its course. Need to find some inspiration soon
Login to Quote

Hope to see you back sooner rather than later!
Login to Quote

Justice
1 year
Shame to see the story end, you always know how to captivate readers.

I was particularly impressed with your wheeling and dealing to get Durmisi, Dunk and Pardo for so cheap. They would have the quality to push for a top-half position.
Login to Quote