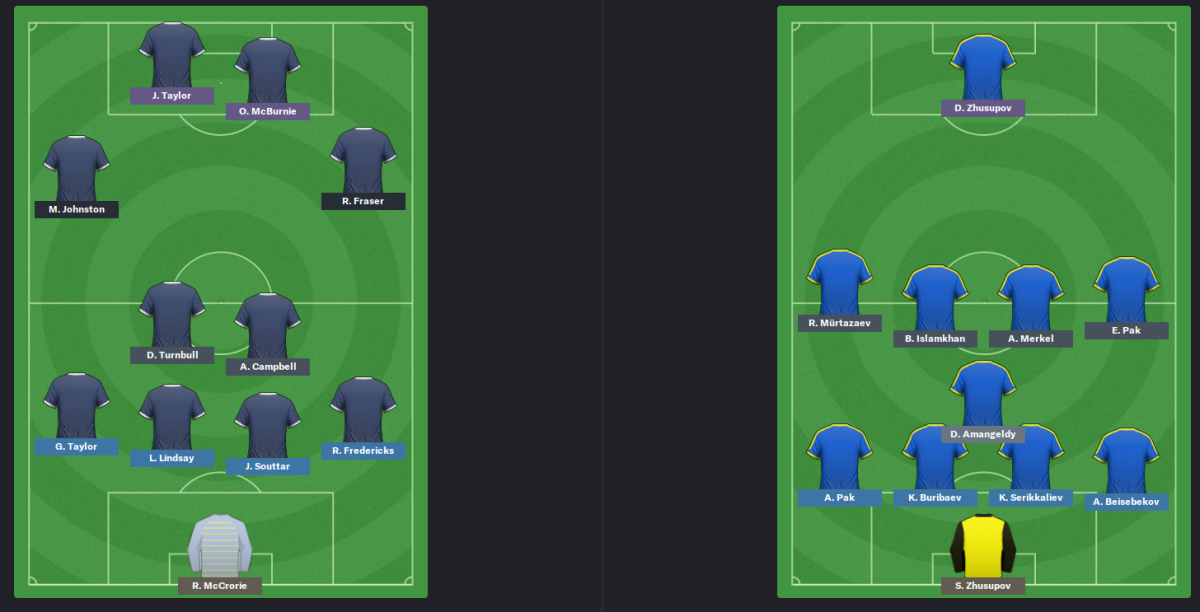 With the news that Andrew Robertson had to pull out through injury Scotland went in to this game having taken a big blow as their captain is the beating heart of this team. Greg Taylor was called up in his place and he started the match against Kazakhstan, he joined John Souttar as the only two changes to the team that faced San Marino last time out. This wasn't a classic game and the first half was a bit of a bore fest and with the Scotland team dreading their expected half time bollocking John Souttar popped up with a forty-eighth minute goal as a result of an excellent cross from James Taylor. Souttar's goal took the team in at the break with the lead but in the end up it was the winning goal as the second half wound up as bad as the first. Not a great spectacle this one but they got the result nonetheless. Ryan Fraser picked up an injury in this game and was replaced by James Forrest. It was Taylor that picked up the man of the match this game and there wasn't a lot of competition for the award in truth. 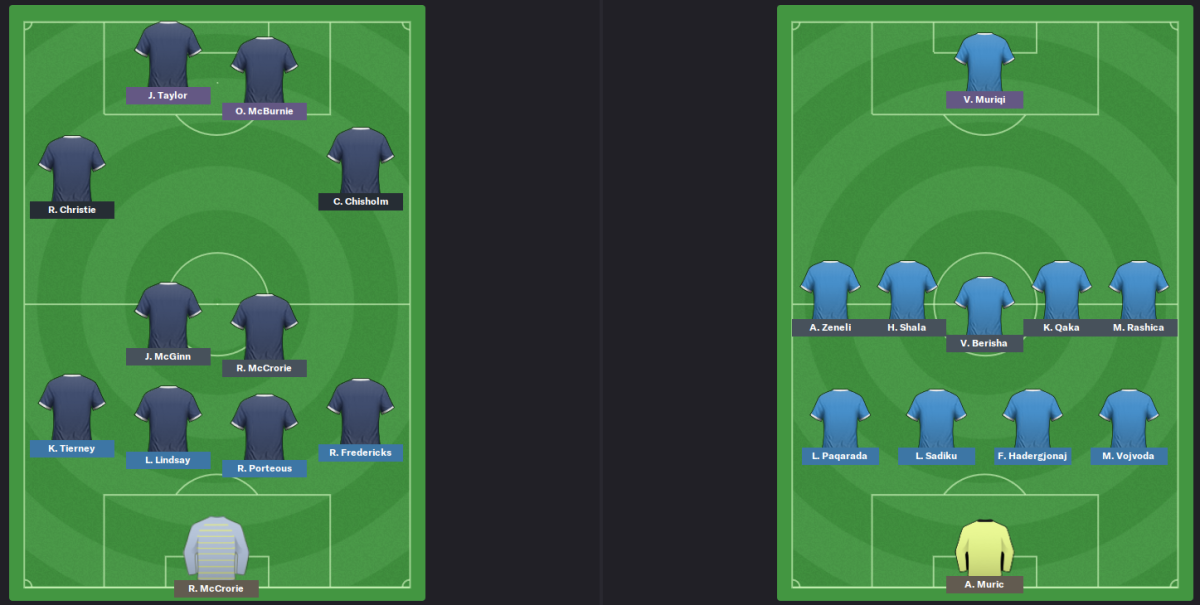 With Ryan Fraser picking up an injury in the last game Scotland called up young Celtic winger Chris Chisholm for his first cap. A host of changes were made for this game as Kieran Tierney, Ryan Porteous, John McGinn, Ross McCrorie, Ryan Christie and Chris Chisholm came into the starting eleven. This game was in stark contrast to the bore fest we all had to endure in Scotland's last match. This was an eight goal thriller and had the fans loving every minute of it! Chisholm had a debut to remember as he got the ball rolling with an excellent strike after being fed the ball by McCrorie outside the box. A fantastic start to his career and he followed it up with an assist for James Taylor just four minutes later. Vedat Muriqi pulled one back for Kosovo on the twentieth minute McCrorie restored Scotland's two goal advantage with a neat volley from Christie's cross. The teams went in at the break with the home side leading three one. The excellent Chisholm was replaced by James Forrest at half time after doing more than enough to impress the manager. Forrest made an immediate impact as he fed Taylor with an excellent ball over the top and the in form striker notched his second. He got the hat-trick on the hour mark after he was tripped in the box and he scored the resulting penalty. Christie wrapped up the scoring for Scotland with a superb thirty yard free kick with five minutes left to play. Muriqi grabbed another consolation for his side but it was all Scotland in this match and what a match it was.

TheLFCFan
1 year
Four from four and blitzing opponents whilst conceding very little goals. A dip in performance against Kazakhstan but a much better performance with a great result against Kosovo, who'd only conceded the once in their previous three games. Also good to see despite two injuries to two key players you have the likes of Taylor and Chisholm making an impact in both games. Good work.
Login to Quote 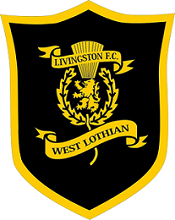 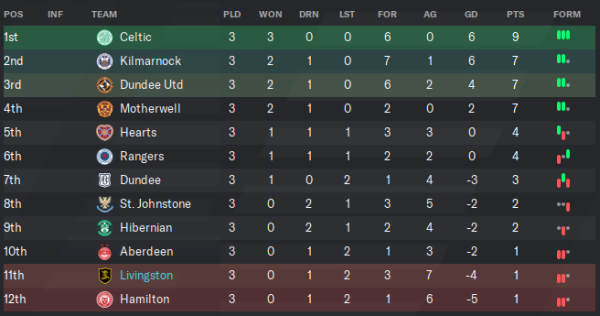 In my first pre-season as a club boss I must admit that I didn't ever expect it to be this intense. With a raft of loan players heading back to their clubs and some fringe players contracts expiring I knew we had a bit of a rebuild on our hands. Having secured the signings of Keith Miller, Ryan Jack, Joe Chalmers and Jack Hendry we had to look at some departures before we could add to the squad any further. Conor Hazard left after the expiration of his contract whilst Aaron Darge, Jack McMillan, Ben Docherty and Daniel Kemp were each granted permission to leave on a free. We let three of our younger fringe players leave the club on loan and then we allowed Michael Ihiekwe to leave on loan too as we had enough options in his position at that point. A couple of weeks passed and we then had to recruit another centre back due to Cardiff coming in with a bid of £1m for Brennan Camp. The offer was too good to turn down, with the club needing the funds to aid in our recruitment and he was our third or fourth choice centre back so it was an easy sale. That allowed us to beef the squad up and we had to do that with loans as we couldn't afford to splash the cash on anyone. I'm particularly happy with the addition of Adam Lewis, Anthony McDonald and Bailey Peacock-Farrell who will all mostly be starters for us this season. The others that we added on loan were good solid additions that will push our current players for a starting berth. I feel really assured that we have a solid midfield and a potent strike force at our disposal. We actually turned down a £2m bid for Lyndon Dykes as I felt that he would significantly weaken the side should he leave and the money wasn't quite enough to persuade us otherwise, perhaps a million or so more would've been tempting.

We had a few fairly poor friendly fixtures before kicking off the Betfred Cup group stage but those results didn't phase me as they were irrelevant. Although our group stage fixtures look like we breezed through the whole thing it really wasn't the case at all. The first match was fairly routine but Airdrie really scared us as they led two nil and then three one before we finally got our act together and secured the win with a late flurry of goals. The Dunfermline match got off to a dreadful start when Keith Miller got sent off after just two minutes however, we managed to grind a solid result out nonetheless. We went two nil down to Edinburgh City but after pulling one back with twenty minutes to go Steven Lawless and Lyndon Dykes before scored in the dying minutes of the match to give us the lead. Edinburgh City weren't to be deterred though as they went up and scored a ninety-third minute equaliser which took the game to penalties and we won in the end. We were paired with Dundee United in the next round and that turned out to be a disaster. We were extremely poor on the day and ultimately paid the price with an early exit from the competition.

Our European adventures got off to an exciting start as we beat the third best Croatian team of last season Rijeka three nil over two legs. The goal less draw wasn't pleasing and was fairly nervy to watch however we came into the second leg a much better and improved team as we breezed through to the next round. Cypriot side Omonia went about the ties in a much different way to Rijeka as we annihilated them in our first game and then they fought to the death trying to overhaul their massive deficit from the first leg. Thankfully, our strike force were on hand to ensure that we would still qualify despite defeat in the second leg. Although Zenit St Petersburg didn't dominate the first leg they did have the overall better quality in their side that ensured they would head into our repeat fixture with a comfortable lead. The return tie was actually worse and so our European adventure ended in the last hurdle before the group stages. Still, we done well to reach that stage and were just unlucky to be paired with such a big club.

Our league campaign couldn't have gotten off to a worse start as Motherwell secured a narrow win against us, not helped by the red card given to Derek Cunningham-Tierney. Kilmarnock trounced us in our second game as we were so poor on the day and never looked like getting anything from the game. With defeat in our first two fixtures questions were already being asked and if we were to lose the third game then there might've been trouble. Hearts sailed in to the lead after seventeen minutes and then doubled their tally just before the hour mark, worrying times. With dread of an early relegation battle ensuing our strike force pulled their socks up and had us level with ten minutes left to spare. Unfortunately we couldn't find another goal to secure the win, and in actual fact we were lucky that Hearts third goal was ruled out for offside.

All in all, decent first Europa League II run out for the lads given it was their first shot at it and with a mostly newly assembled squad too. We were decent in the Betfred Cup group stages however, the smaller teams challenged us a little more than I was happy with. To go out so comfortably to Dundee United was hugely disappointing but not a major deal. Our league form hasn't been good enough to start with and the boys are doing extra training for the foreseeable future in order to help them bond and create a togetherness within the squad that'll help us improve. Hopefully, we can start picking up some wins in the league once again and our poor league run, dating back to last year, doesn't continue any further.


TheLFCFan; It's been a pleasing start that is for sure! Starting to see some promising youngsters coming through now so some of the regulars need to watch out. Cheers mate!
Login to Quote 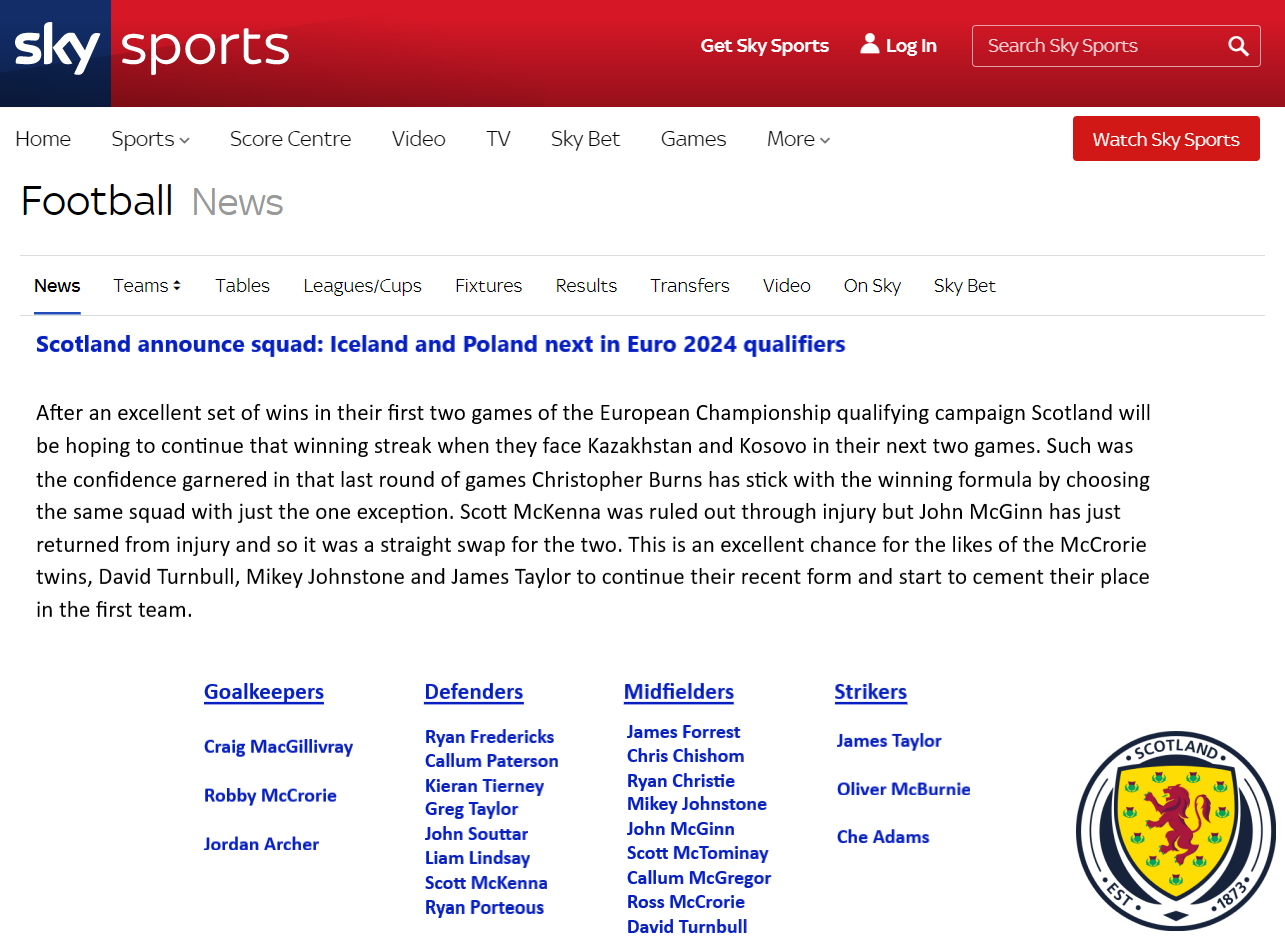 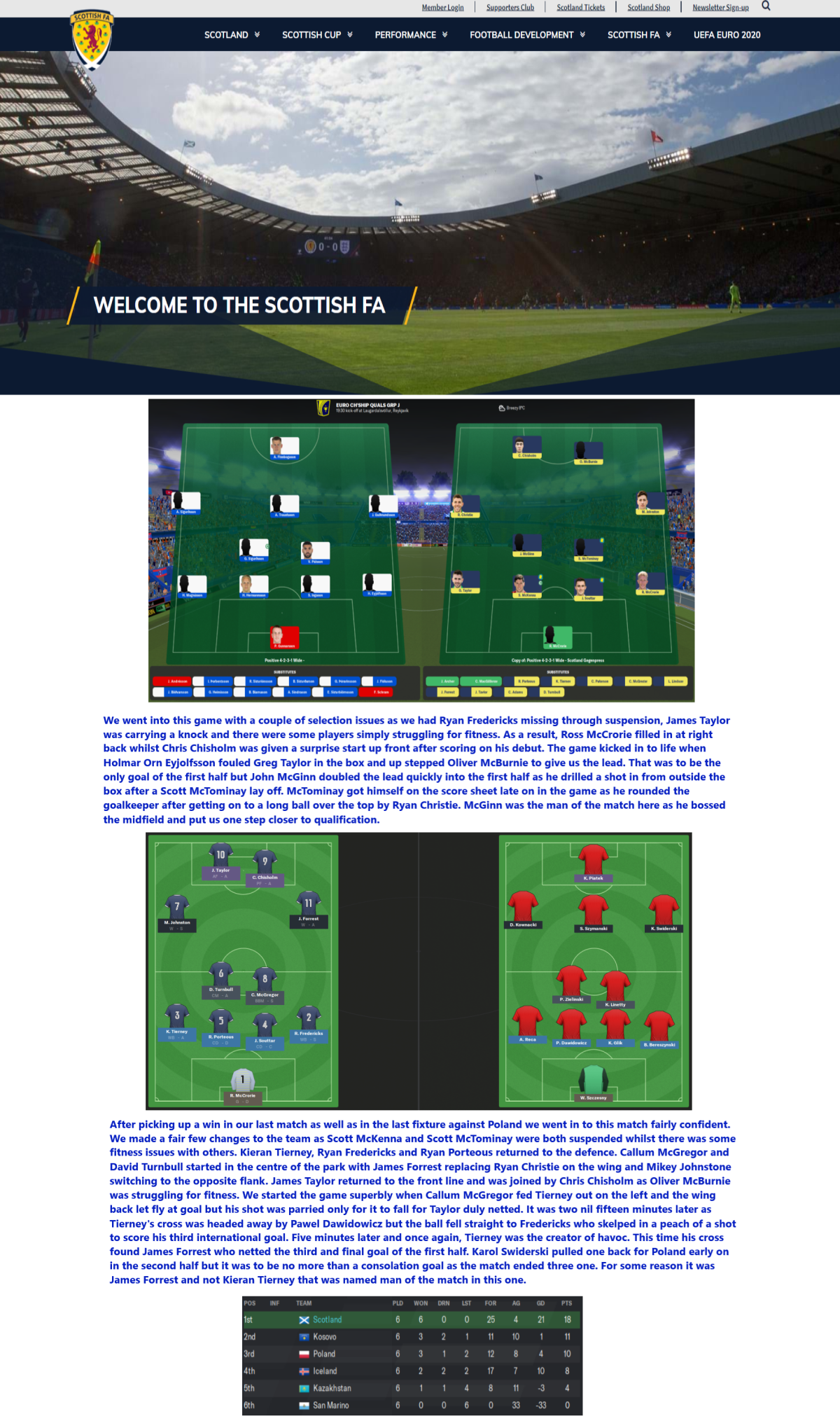 ScottT
1 year
European exploits have certainly contributed to a turbulent start to the domestic campaign, I feel. Hopefully form can begin to stabilise soon as the squad you've built is certainly decent on paper. Scotland are absolutely flying, meanwhile. Brilliant stuff from the boys!
Login to Quote 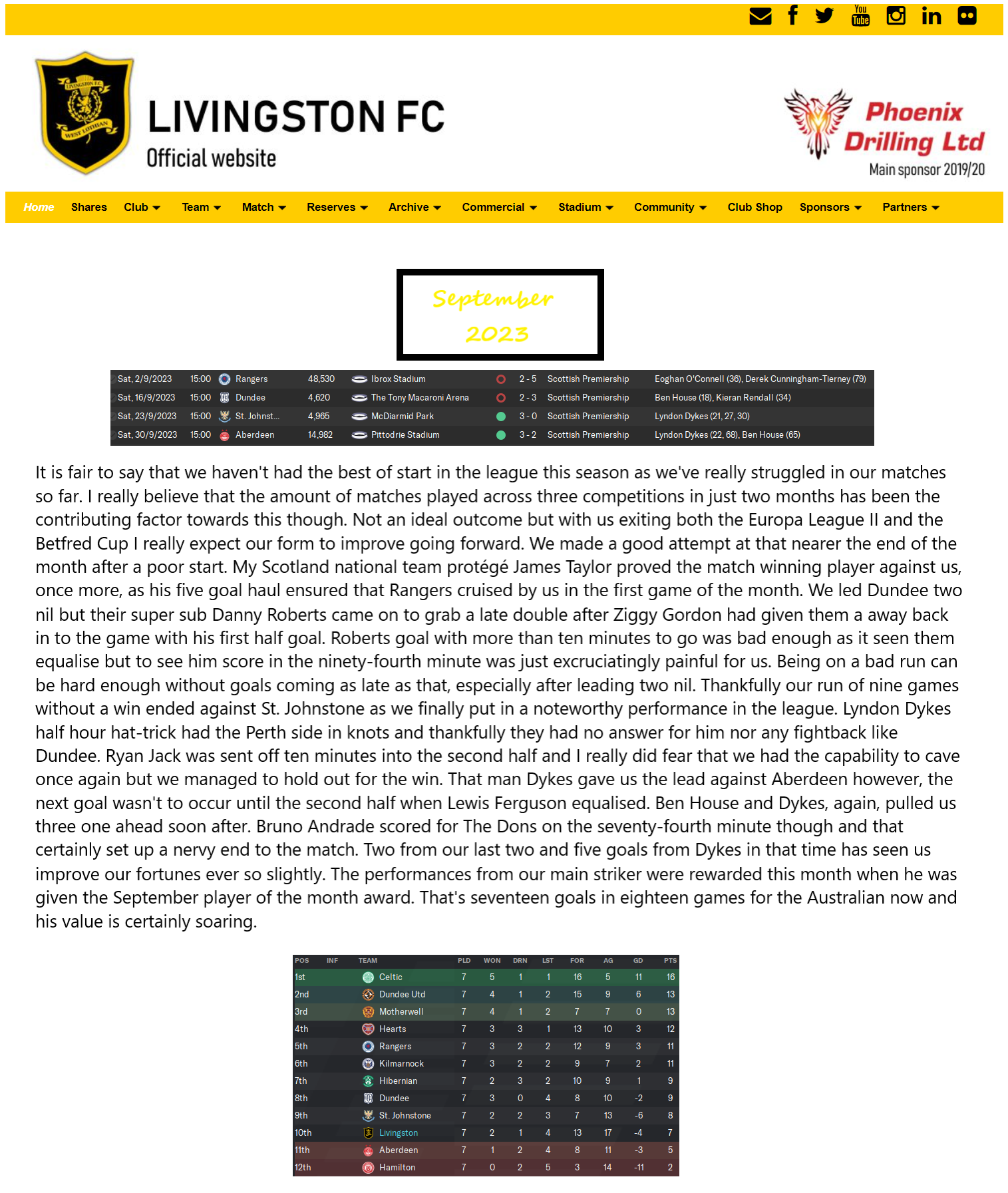 I believe so too mate! That is the hope, can't be getting sacked now can I?! It's been a bit of a switch around, the national team are doing well again and the club form is starting to go! Just glad to get some relief from time to time with me going between both club and country.
Login to Quote 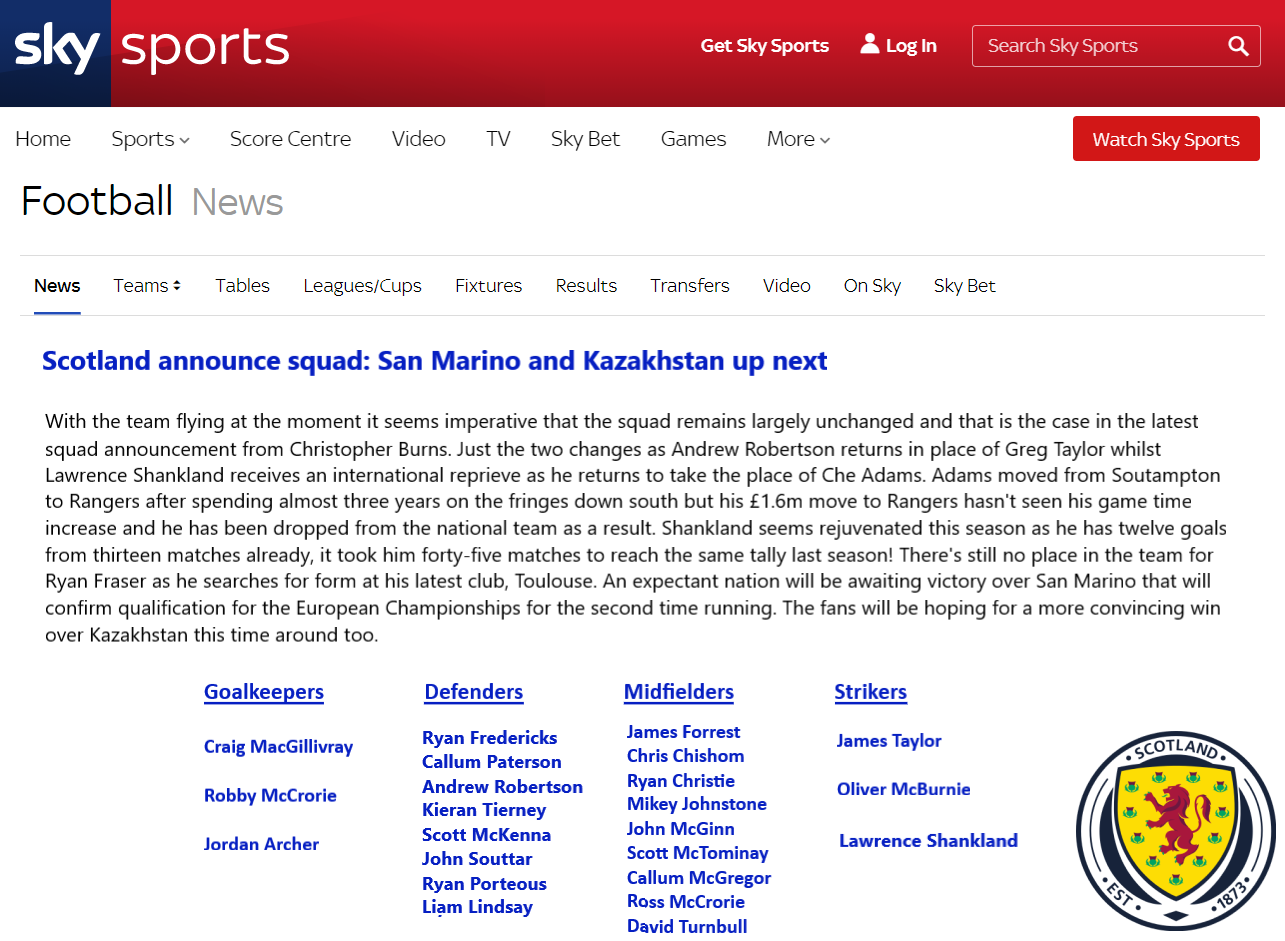 ScottT
1 year
I'm willing to put a tenner on over 9.5 goals to be scored over these two games.

Hopefully those two victories for Livingston and the start of a turnaround in form.
Login to Quote

walkinshaw
1 year
From the start Poland was probably your only real competition for top spot and possibly Iceland but your making easy work of it so far mate.
Login to Quote

TheLFCFan
1 year
A really tough start to the season, but rather get it out of the way now. Hopeful to see much improved performances upcoming, following the good end to the month.
Login to Quote 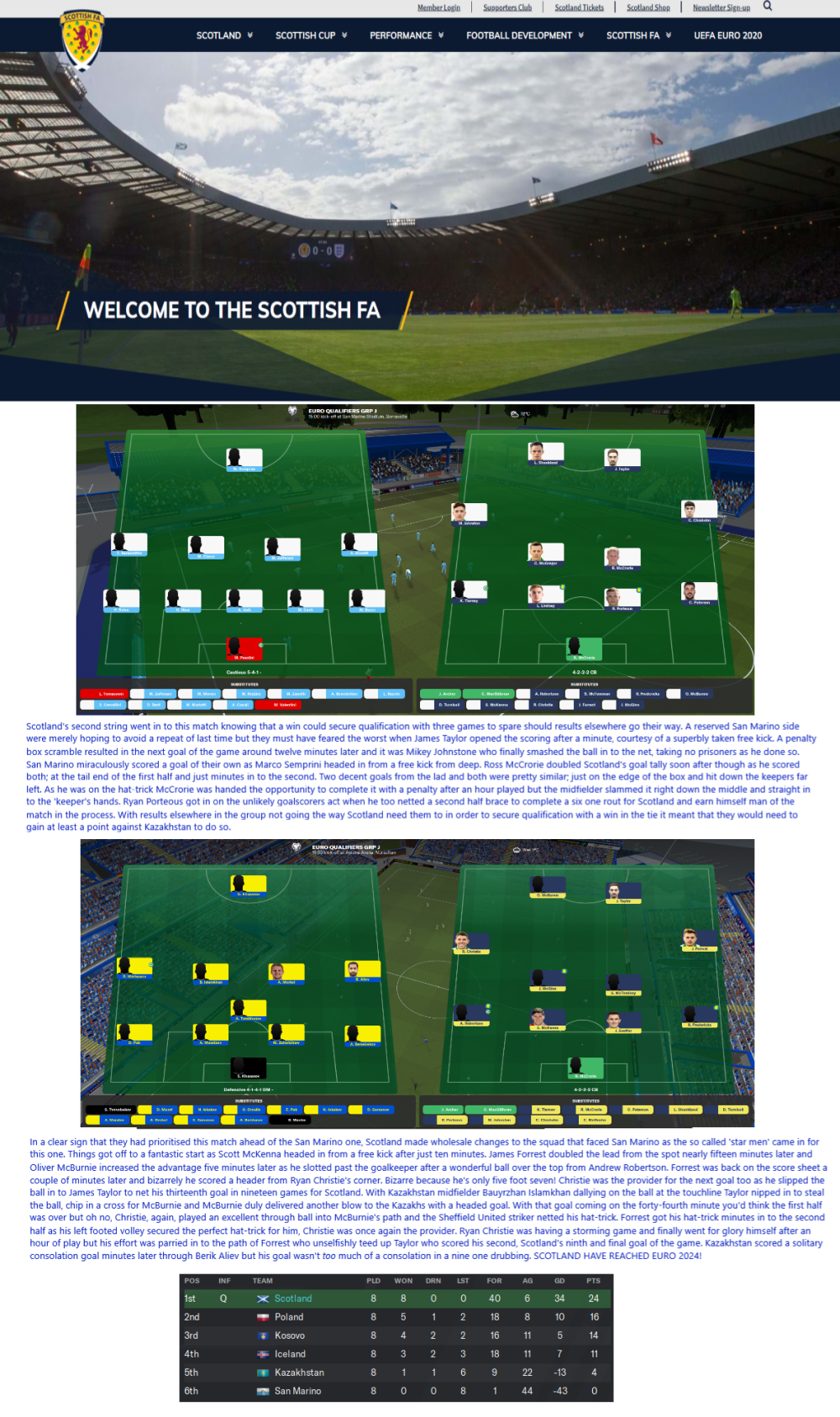 Good bet mate, shame you didn't place it! I really hope it does give us the platform to kick on or things could turn nasty.

I believed them to be as well but somehow we have managed to do well against them after struggling against them in the Nations League. Cheers mate!

It certainly has been mate! That's it, hopefully out of the system now... Cheers mate, I do too.
Login to Quote

ScottT
1 year
Easy as you like. Although conceding to San Marino, oh dear

You are reading "O Flower of Scotland".