A really poor match from us here as we just couldn't get going the whole match but we scrape through when Tilt turns the ball into his net when trying to clear the ball from 3 yards out. 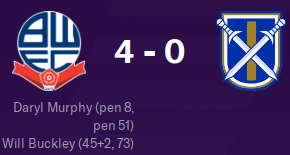 We put out a strong team here thinking that this was going to be a tough match here depending on who Leicester were going to drop into their U23's but luckily they decided not to and Murphy made them pay from the penalty spot with Buckley also getting two great goals off the left wing.

A game that we showed a great presance going forward but our defence also showed us up here. We were just lucky Brewster is such a god striker and was able to get the goal with less than 10 minute remaining. 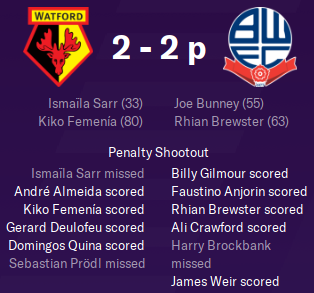 What a game here as we went out fully expecting to get battered by a much stronger team but Watford just didn't turn up for large portions of the game. When we went 1-0 down I really expected us to concede again quickly but we manage to hold it to half time. At half time I sit the lads down and tell them they can still go out there and cause a massive upset and it works as we go out and get two quick goals. I thought we were good value for the win until we conceded in the 80th minute. Luckily at the moment in the cups we seem to be able to beat anybody if it goes to penalties though as we now march onto the quarter finals. 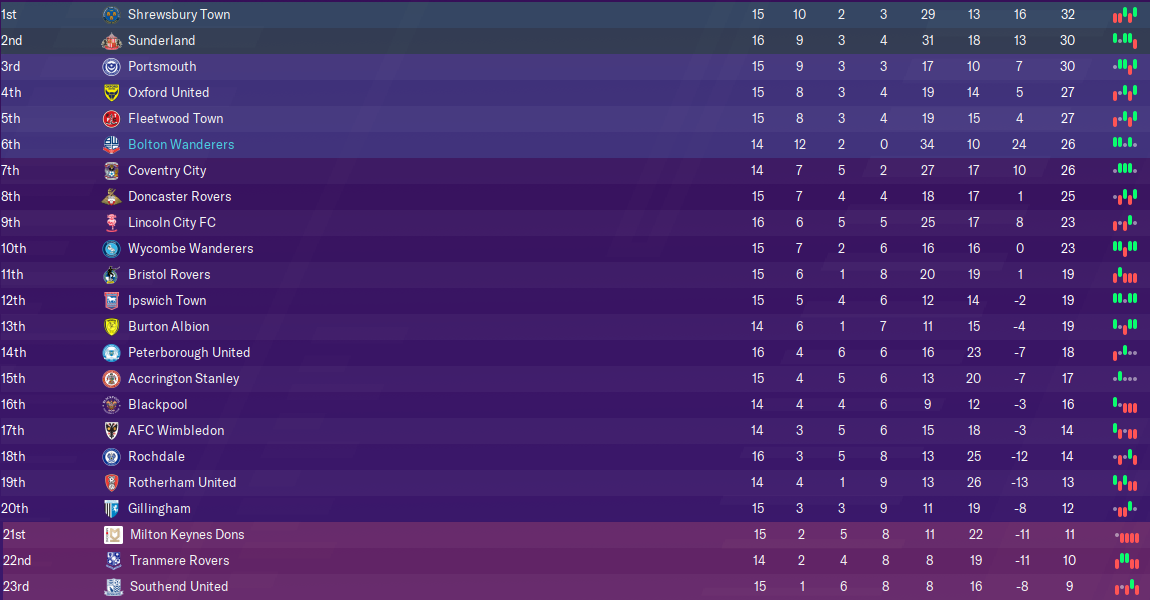 The league is still looking really good for us as we now only sit 6 points off of top spot.

ScottT
4 months
An absolutely amazing start to the season, far beyond what anyone could have expected I think! A major scalp in beating Watford... the prize money from the Carabao Cup will be a major boost, especially in aiding with paying off those huge debts. Every little helps.
Login to Quote

2019-11-25 22:42#263196 ScottT : An absolutely amazing start to the season, far beyond what anyone could have expected I think! A major scalp in beating Watford... the prize money from the Carabao Cup will be a major boost, especially in aiding with paying off those huge debts. Every little helps.

Cheers mate yeah the results have been unbelievable. The defence has been brilliant and the wingers having been adding plenty of goals as well when they've been needed. Play off spot is now seen as a must by me for this season
Login to Quote

Going up against the team above us in the league and it was a tough match and we got very lucky here thanks to Brewster showing his quality in this league to get us a lucky point.

Thanks to playing a lower league team we are able to rotate a large amount of the starting XI here and able to play a few youngsters. We did struggle but luckily Crawford came on and was able to send us to the second round to face Rochdale. 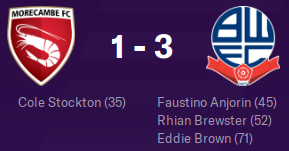 Everybody comes back into the starting lineup here and the quality shines through as we run out well deserved winners with Brown coming on for his debut and grabbing a nice goal to go with it.

We get very lucky here as MK Dons manage to undo themselves with two terrible defensive errors that resulted in 2 own goals which was enough to give us a lucky 3 points. 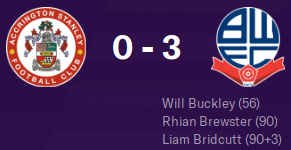 We were really made to work for the 3 points here right up until the end when our extra fitness here helped with the two goals in the final 3 minutes.

We put out a strong team here as the third round is the first decent chance of gate receipts so we needed to make sure we made it and it was Brewster who was the difference again. 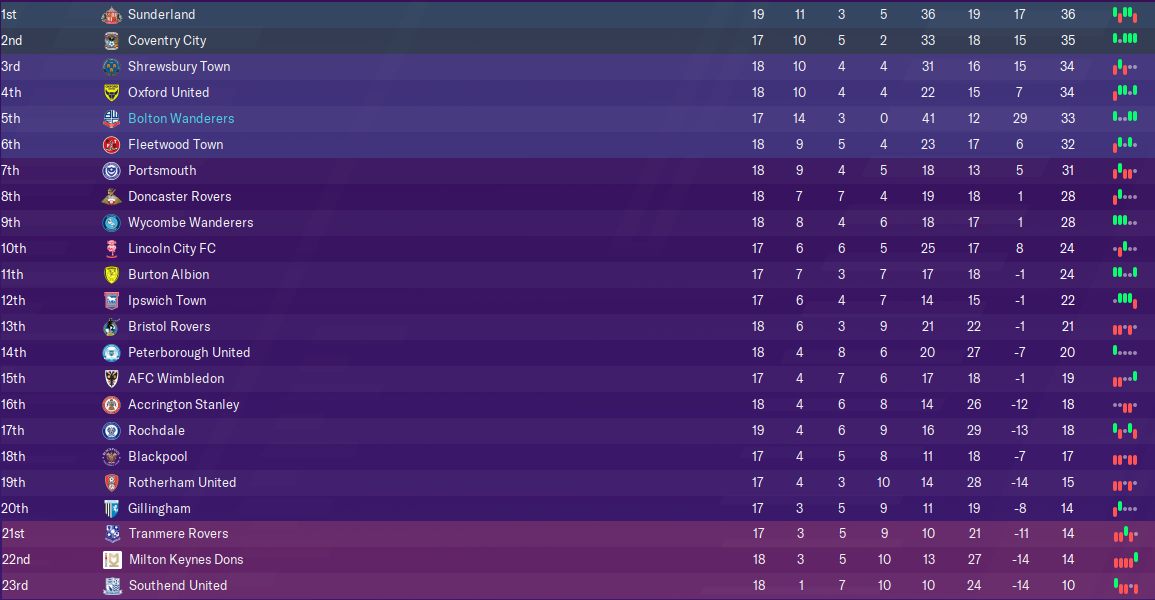 ScottT
4 months
Another good month of progress. A place in the third round of the FA Cup will also help with debts. You're in touching distance of the two automatic promotion spots, which is astonishing given your disadvantage going into the season. A difficult and busy month awaits, but if you can come out of December strongly, you'll be in an excellent position. Spurs should mark the end of the line in the Carabao Cup, but who knows with momentum and confidence on your side.
1
Login to Quote

TheLFCFan
4 months
A rather incredible set of results already in your time at Bolton, unbeaten and with a win in your game in hand you go top! A great start to the career! Good job.
1
Login to Quote

A very tough game here but Birdcutt is making a habit of scoring goals in these sorts of game and he guts us the three points.

With games set to come thick and fast this month we try and rotate a couple of players and we struggle again but luckily Brewster grabs the only goal of the game. 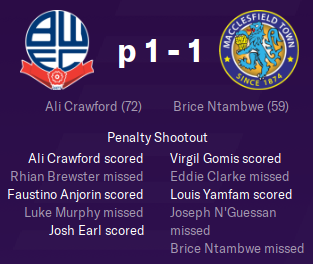 Another cup tie and another win by penalty win as we march onto the next round. I thought we were getting past this after last month but we march on so that is all that matters.

We are dumped out of the cup but its a great way to go out to only lose 1-0 to a team playing in the champions league. I really didn't want the two legs of the semi final in January to make fixture list even heavier.

This was such a disappointing game we got off to a flyer with a great opening goal in the second minute but we just couldn't capitalise on the quick start and Southend grab one back 20 minutes later. They then go down to 10 men but again we can't take advantage of it as we're lucky to stay in the game. 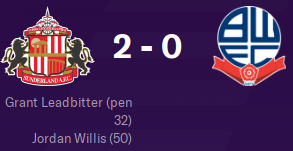 And our world comes v crashing down as we get our first defeat of the season against a much better team on the day as they just blew us out the water. Hopefully after the draws and this the wheels aren't going to come off.

A very important win here after our dip in form over the last few games but we leave it late and its another youngster who is taking their chance. 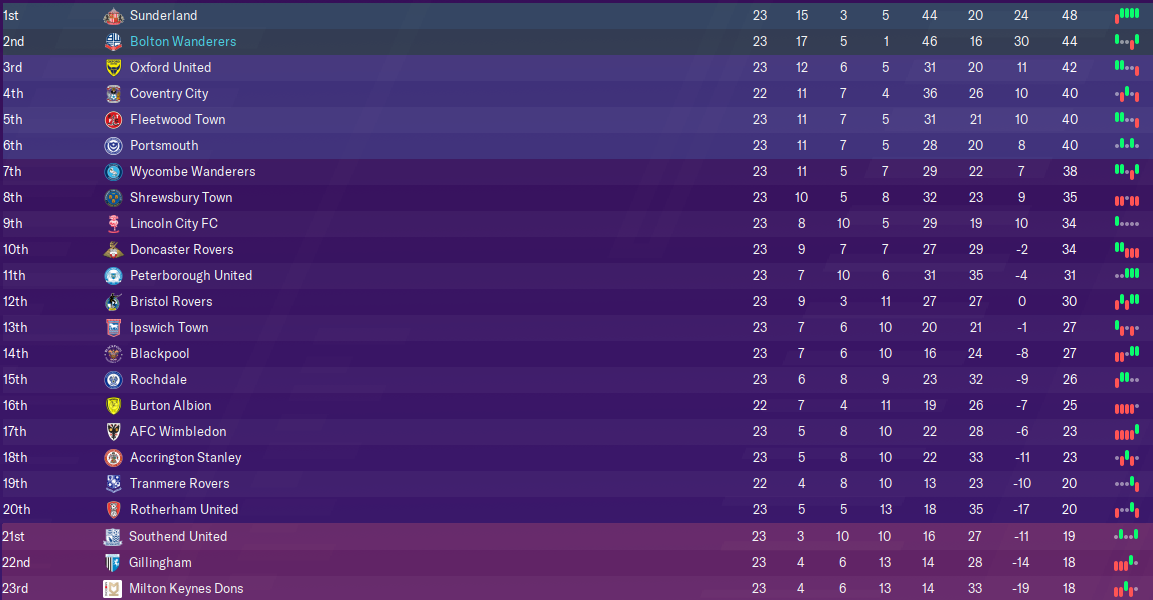 So with the year coming to an end I thought I would give a quick update on our finances since we are paying out £400,000 a month in loan repayments and it doesn't make pretty reading

With this the board have been very generous and slashed our wage budget by £20,000 a week so there will be no new signings in January

One positive piece of news is that I can sell a sell on clause for Rob Holding for £6.5 million but I would rather hold onto that until the same to make the most of any funds got from it.

ScottT
4 months
While the financial side of things is likely to remain gloomy for some time, on the pitch things are excelling beyond belief. The result against Spurs just highlights how excellently you've faired. Hopefully this form can continue into the new year.
1
Login to Quote

2019-11-27 23:26#263308 ScottT : While the financial side of things is likely to remain gloomy for some time, on the pitch things are excelling beyond belief. The result against Spurs just highlights how excellently you've faired. Hopefully this form can continue into the new year.

Cheers mate. The finances will really make next season interesting as over half of our contracts expire and that after me tying down the ones I want to keep
Login to Quote

Trotman9165
4 months
Insane recovery thats all i can say!
1
Login to Quote

Nothing like starting a game really well and then trying your best to throw it away with going down to 10 men but luckily we are able to keep our run going of winning by a single goal.

What a game. When going a goal down I really thought the game was over but the goal on the breath of half time gave us a new lease of life for the second half. We come back out fighting and we snatch a quick second early to give us the advantage before putting the game to bed with 9 minutes to go. Its our biggest win to date.

We come back to the league with a bang to make us remember where our level really is.

We bounce back with a good win to get us back on track after the blip against Blackpool. Was also a great hat-trick for Brewster and was a great way for him to end his goal drought.

This game was a slog for both teams as neither really had any real chances until Brewster popped up with the only goal of the game.

I'm not sure how but this team just keeps finding a way to put teams away when we really deserve a point or less at the most as Portsmouth were the much better team here. 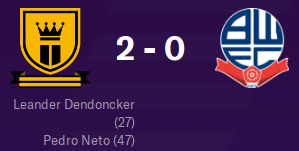 Our FA cup run comes to the end against a much stronger opposition.

The opening 10 minutes was where it all was in this match and after that it all fizzled out as neither team had any real chances. 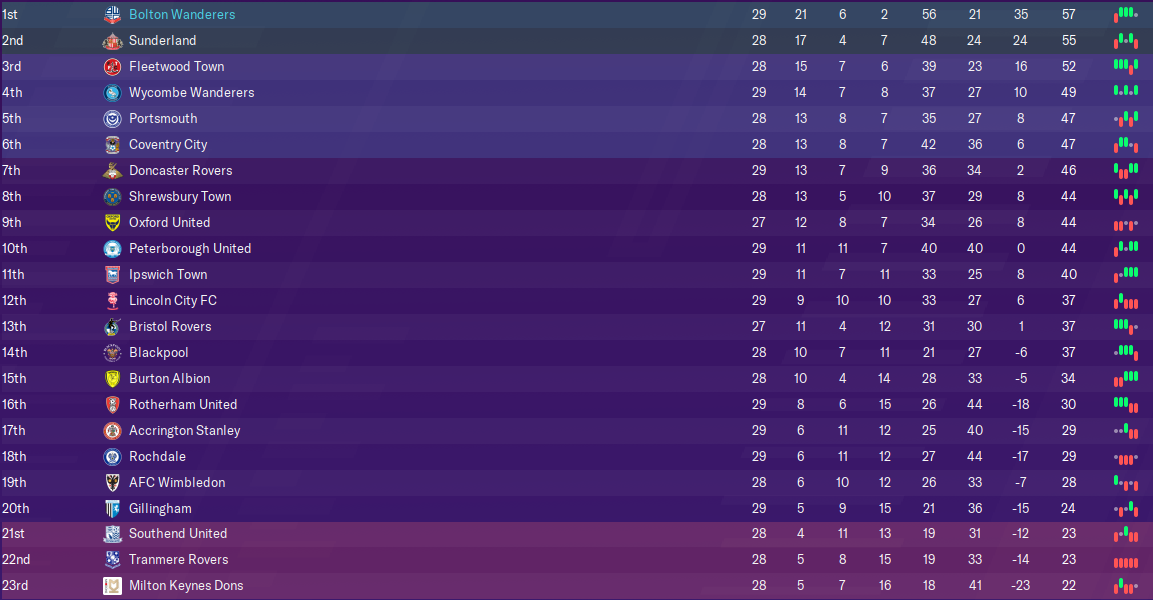 There was no transfer business done this window as after the wage budget being slashed I needed to keep everybody we have as I couldn't get the wages together to replace them.

ScottT
4 months
Incredible result against Bournemouth. Steady work in the league over the course of this month, but your position in the league continues to look impressive.
1
Login to Quote

Brewster making the difference again here and showing how important a signing he's been as I really don't think we'd be doing this well without him. 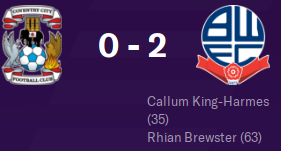 Its a nice steady win again and it was nice to win by more than a single goal again along with keeping a clean sheet.

We get off to an absolute flyer thanks to a striker from 20 yards out from Gilmour and thought we were going to be onto a good thing after that but we just couldn't get another and then it was so disappointing to concede with the final kick of the ball. 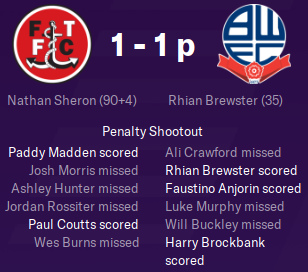 AHHH we concede the equaliser with seconds left on the clock and the ref even makes us do the kick off before blowing the whistle. But the penalty specialists step up and send us through to the semi finals to face Rotherham.

With games coming thick and fast we rotate her and kind of sacrifice the game by doing so. If I was a betting man I would of had a good punt on us losing the match.

Everybody comes back into the starting line up as I have decided to take this competition seriously to get some silverware into the club and it shows as the game was all over in the first half as the second was one of the most boring halves of football the world has ever seen.

Accrington really made us work here as they took the lead before the main man Brewster pegs one back withing 7 minutes to get us back on level terms before getting the winner right at the death and it gets our league form back on track with it being our first win in 4 games. 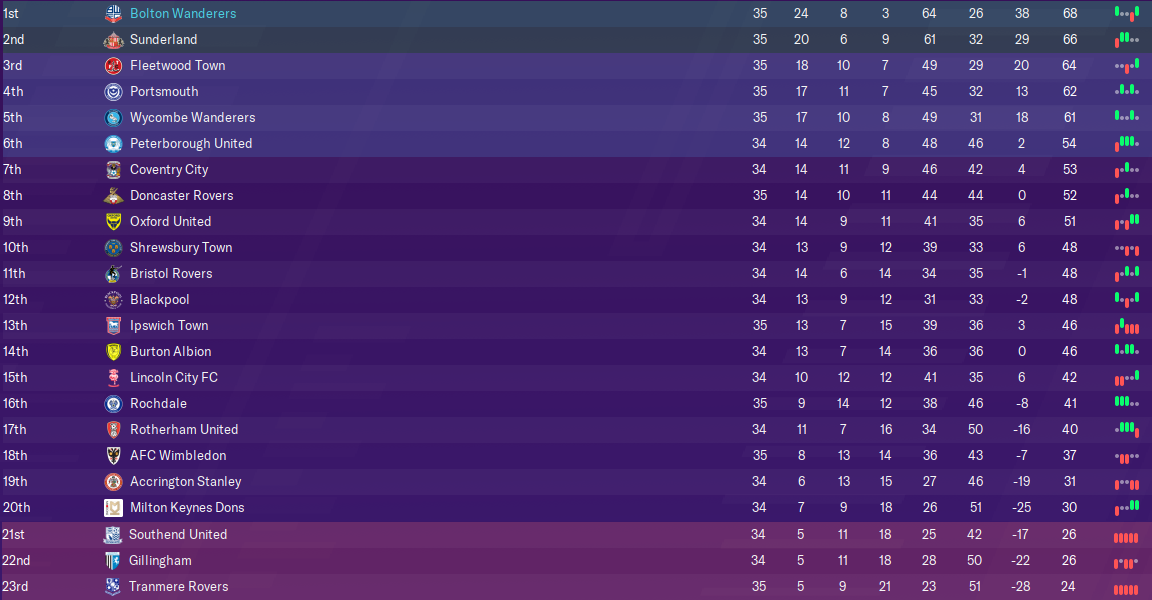 ScottT
4 months
Overall, a positive month once again. Hopefully that late equaliser for Doncaster isn't something you later come back to rue at the end of the season. Congratulations on booking a place in the North final, too.
Login to Quote

TheLFCFan
4 months
A couple of disappointing results, in particular against Franchise FC. However, still top of the table and over halfway through now.
1
Login to Quote

You are reading "The Rise and Fall of Bolton Wanderers".