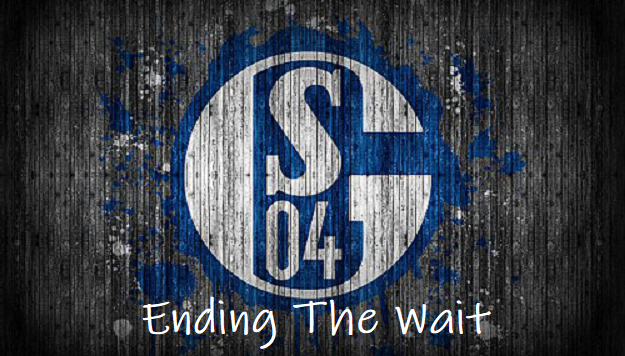 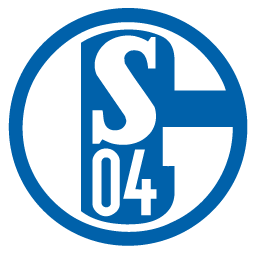 Founded in 1904, Schalke has won seven German championships, five DFB-Pokals, one DFL-Supercup and one UEFA Cup. Although they have had success as a club a top flight title has eluded them for over 60 years and that is the first goal as the new manager.

With heavy backing from Russian gas company Gazprom Schalke were expected to take a spot at the top with Bayern and Dortmund but has so far failed to do so and no longer are a FM Sugar daddy club with international stars in tow. 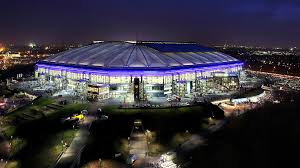 Alexander Nubel - Nubel IRL has moved to Bayern to be Neuers heir who was alsó a Schalke youth player and is clearly in the same mold as Neuer as a sweeper keeper. He's the clear first choice keeper here but he needs to work on his reflexes.

Matija Nastasic - Probably our best defender though not spectacular himself he should lead the defence well for now. Has great positioning and decision making which make up for his average speed but will need help alongside him for sure.

Amine Harit - The best prospect at the club we'll look to play him on the left wing cutting in and firing through balls to the forwards.he should be a creative beast with his dribbling, first touch and flair but needs to work on his passing.

Guido Burgstaller - The best of a sorry bunch best played as a pressing forward but will most likely be on the bench with reinforcements much needed after the real life sale of Brel Embolo.

Summer Window
With the squad relatively weak yet having ahuge wage bill the clear out began by clearing near half a million in space and selling our best player Nabil Bentalab for 11million pounds to China.

With no continental competition to attract ready made stars the focus was on a mix of youth and lesser know players from around Europe. We managed to raise 60million pound on top of our budget of 8 million thx to clearing some high wage players like Schopf and Bentelab.

The next generation arrives

In came a host of names most notably German striker Davie Selke and Ukranian star Victor Tsygankov alongside a few other names you might know or not know.

Davie Selke - Selke has started like a house on fire bagging 6 goals in his first 4 games including the winner home to Bayern.

Victor Tsygankov - Unfortunately we haven't been able to see what Victor can do thanks to a 3 month lay off upon arrival but I'm hopeful he can chip in and help the offence.

Alessio Riccardi - One solely for the future but a big outlay for the club coming in at a structured 25 million pound deal. I've had him before at Roma and he can become an absolute beast in midfield and super versatile in how he plays.

The big result to start the season is obviosuly the win over Bayern Munich thanks to a Davie Selke goal and in the end a deserved win after being the better team, it's just a shame we couldn't back it up with a win home to Hertha Berlin to round out the transfer window.

ScottT
3 years
Best of luck with this. Schalke's downfall in recent years has been losing talented players on free transfers - that needs to come to an end. You've certainly invested into the future with those signings and I'm very impressed with the names brought in! The early results are tough to read into, but an excellent result against Bayern.
1
Login to Quote

Aaron
3 years
Good luck bro, will be following you!
1
Login to Quote

TheLFCFan
3 years
Some incredible signings in there! Palacios, Armini, Szoboszlai, Tsygankov and Selke being the standouts. Certainly the most mixed start possible, hopefully you can build on that Bayern result next month!
1
Login to Quote 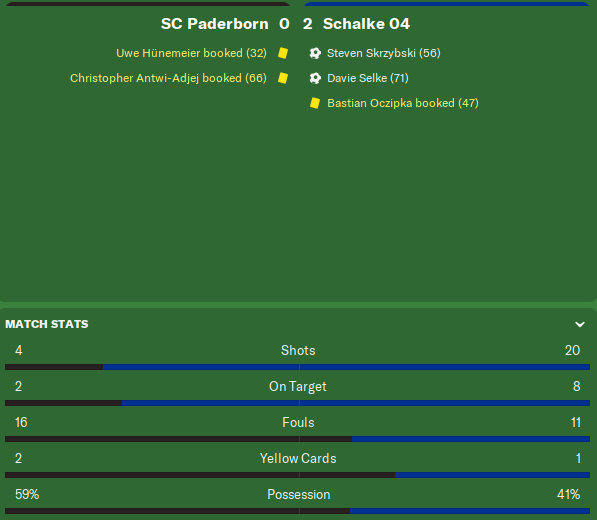 A straightforward 2-0 win here but we made it hard for ourselves missing clear chance after clear chance in the first half it was up to Selke to maintain his goal scoring form to seal the win in the 71st minute. We should have won by more after having 12 corners 21 free kicks and 5 clear cut chances falling our way but a win is a win away from home. 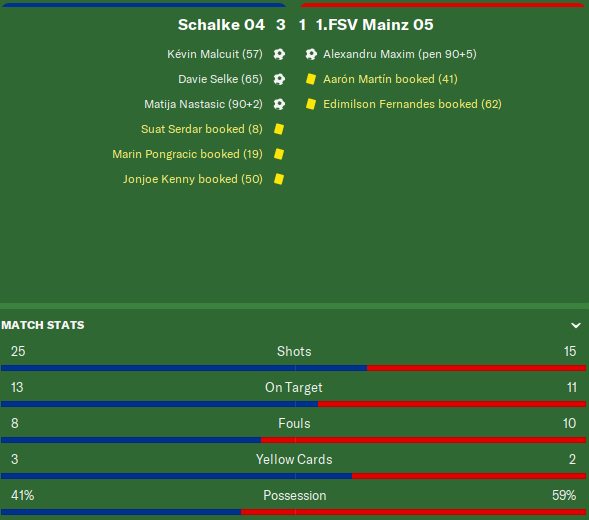 Another game we should have won by more after creating 9 clear cut chances but on the other end we were giving them away as well along with the ball allowing 5 clear cut chances and 60% of possession. Both our defensive subs came on and scored goals to seal the win in between Davie Selke scoring his 8th goal in 6 games to start the season. 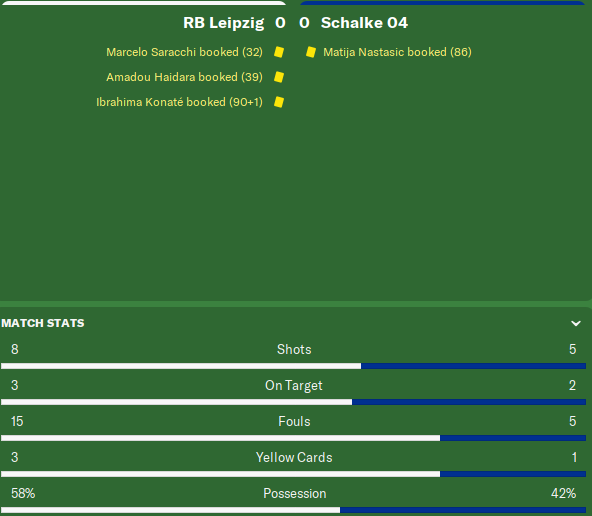 A pretty dour first half ensued with us having the only shots of the game but we came out at half time and only managed a single shot for the entire 2nd half while trying to hold Leipzig off and salvage some points. 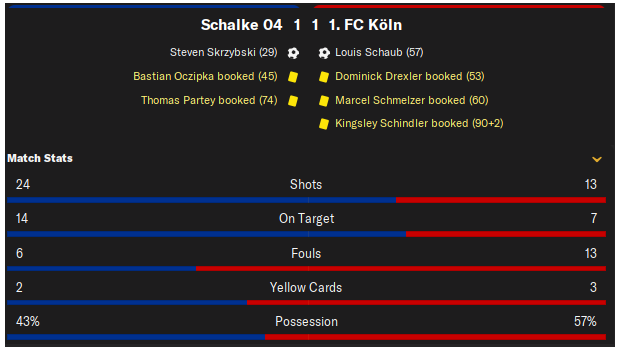 A tough result to take after the amount of chances we created but a lack of clinical finishing cost us again after Steven Skrzybski put as ahead for Koln to equalize in the 2nd half. The match also seen the debut of Barcelona left back Juan Miranda after injury has ruled him out since joining on loan. 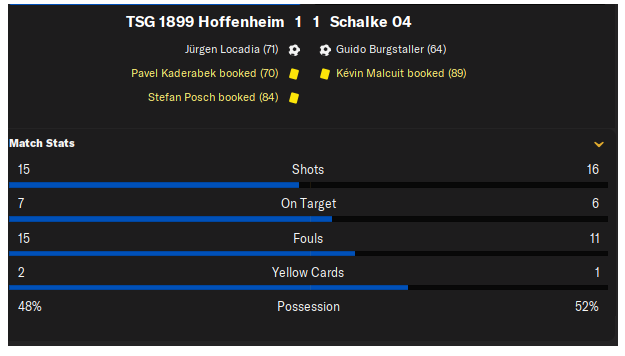 Unfortunately it was more of the same this match and when we finally managed to score thanks to Guido Burgstaller who only started due to an injury to starting forward Selke, Hoffenheim then countered straight away and looked the more likely to get the 3 points. 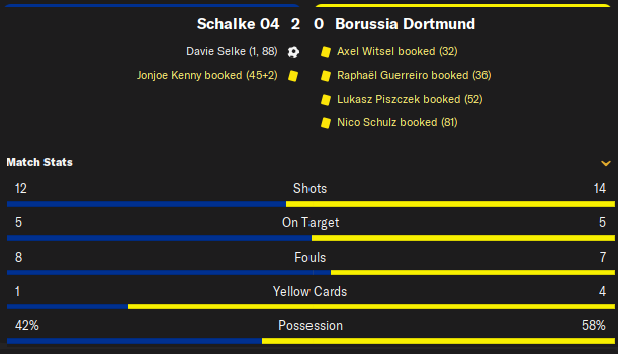 In one of the biggest derbies in German Football we came away as surprise winners thanks to a double from Davie Selke on his return from injury. Selke bagged the first just 17 seconds into the game and then sealed the win late into the 2nd for a huge win over Dortmund 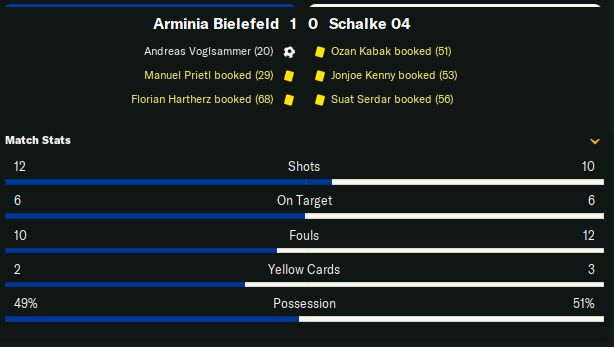 A heavily youth orientated side faced Arminia with the next game only 2 days after this and it showed with a tough 1-0 loss that the board not to happy about.

TheLFCFan
3 years
A good start to the season, especially that result against Dortmund. Good job.
1
Login to Quote

ImThatSybGuy
3 years
Huge win against Dortmund and a 4th place in the Bundesliga, well done.
1
Login to Quote

ScottT
3 years
A largely successful start to the season, despite an early cup exit. Well done so far.
1
Login to Quote 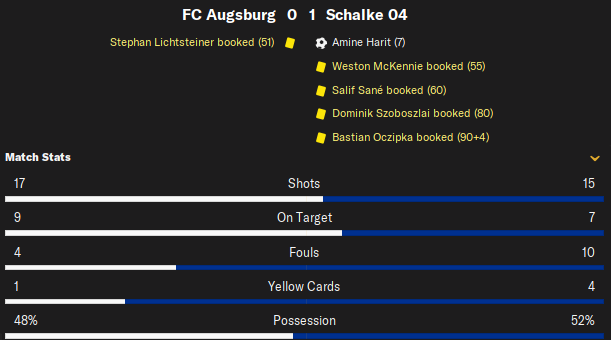 A pretty even away game to 15th placed Augsburg seen us come out with 3 points thanks to 7th minute screamer from Amine Harit from outside of the box with both teams wasting clear chances throughout. 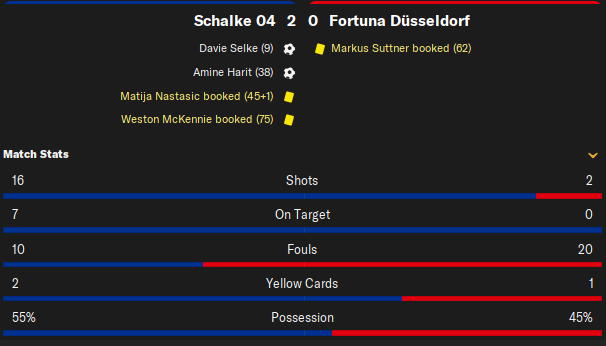 A dominate win by Schalke thanks in large part to the creativeness of Tsygankov who created practically ever chance we had this match and bagged 2 assists thanks to finishes from Selke and Harit in the first half. 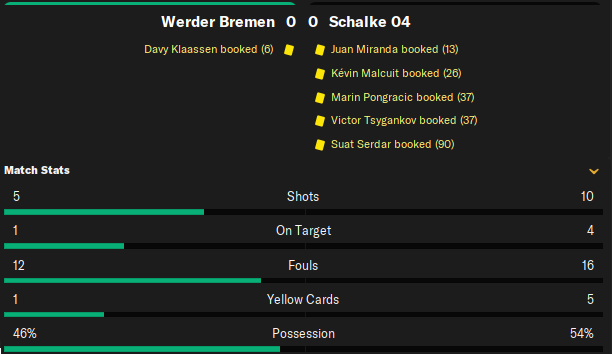 Schalke were the better side but that's not saying much in this bore draw, both team struggled to create much and 0-0 was a fair result. We were just happy to finish with 11 men after the first half card bonaza.

We took the chance to play some youngster against the capital minnows in Armini, Riccardi and Szoboszlai the latter proved the winner with 2 goals and Tsygankov creating havoc again bagging the winner and an assist. Union Berlin's Anthony Ujah and Akaki Gogai were constant thorns in the defence and nearly got a point for the minnows 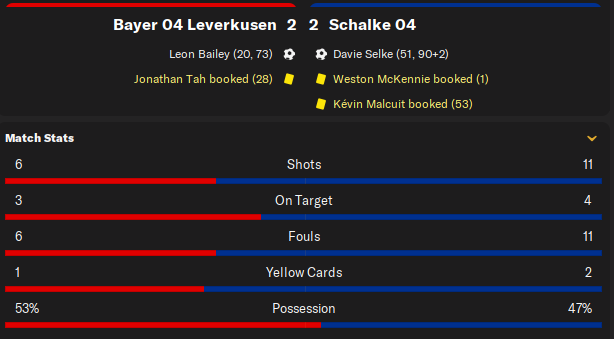 I went into the game expecting our first loss since the opening day with Leverkusen a formidable side and Leon Bailey broke the defence to put us a goal down into half time.A Davie Selke double wither side of Bailey's brace rescued a point for us in the 93rd minute. 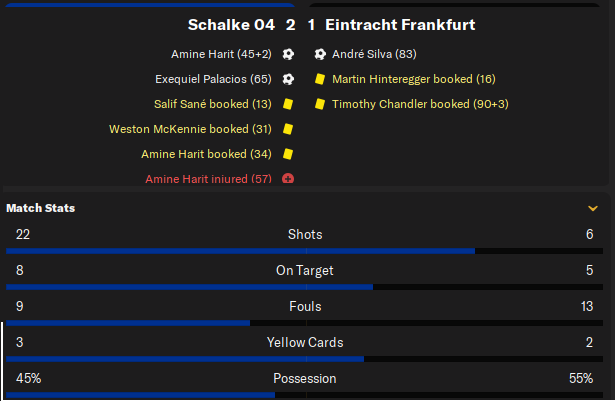 An easy win with a late consolation for Freiburg only ruined by a injury to Amine Harit in the 2nd half. 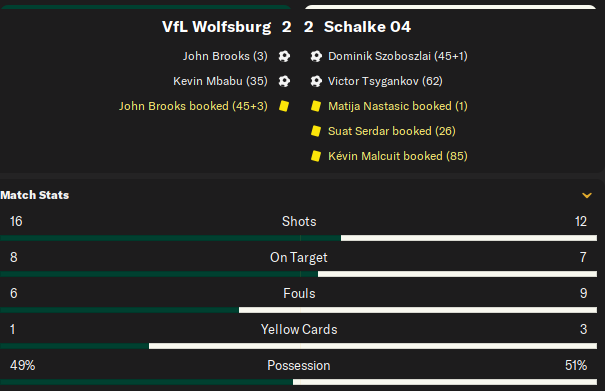 A tough encounter against Wolfsburg and we were down 3 minutes into the game. 2 goals from our wide attackers seen us overcome a 2-0 deficit at half time and rescue a point. 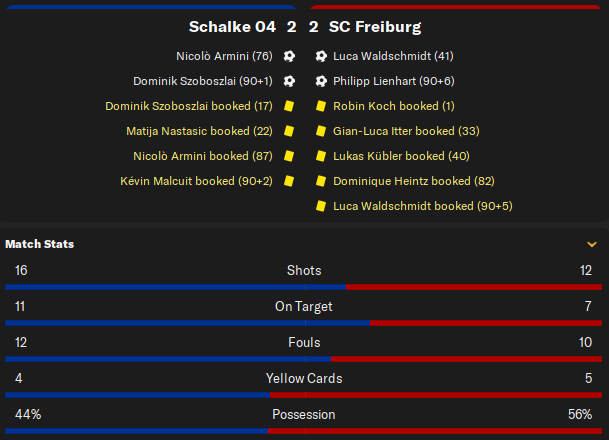 Not happy Jan..... I thought we stole the 3 points here in the 91st minute only to concede from a corner in the 95th minute in what should have been a routine win.

ScottT
3 years
A heartbreaking way to drop points against Freiburg, but you're still looking on-course for a top-four finish.
Login to Quote

You are reading "FC Schalke 04 - Ending The Wait".