Another rough month. This is quickly becoming the rule rather than the exception.

I was hoping we could carry on from a promising month with a win against Taunton and once again the performance was there but we just could not find the back of the net. I feel the opposition got really lucky here, this was an upsetting result.

Due to exiting the cups early on there weren't many games in November which meant it would turn out to be a slow month, at least it meant we could spend more time on the training pitch though. This is valuable time, and needed too.

We looked like we were turning things around when we thumped Yate 3-0, it was an all round fantastic performance against a pretty bad team - They're quite low down in the league. Results against these types of teams seem to be few and far between so it was an important match to win.

Onto Beaconsfield it was back to the normal old Salisbury. Another silly 1-0 loss sees us drop even further down the table, this was also not helped by the 0-0 bore draw against Poole Town which would follow. The pressure is really setting in for me. 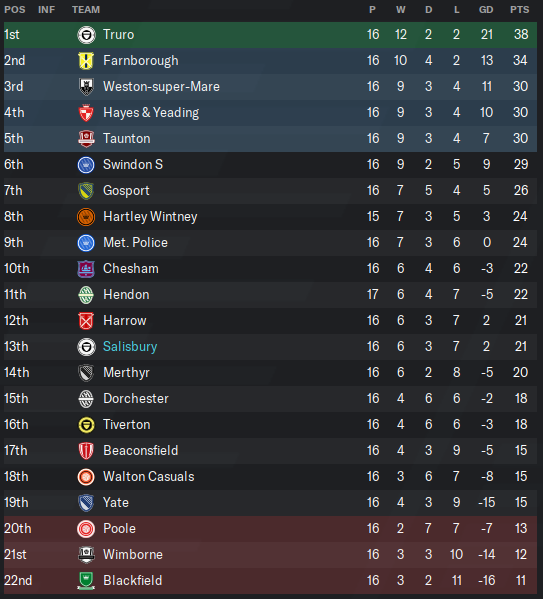 Now 9 points off the play offs. This is bad, very bad. The fans and media are now constantly on my back and it's looking more and more likely every day that I will soon be forced out of the club. I feel it could be days rather than weeks.
Login to Quote

Well it was looking pretty much inevitable and it has already finally happened. The first game of December proved to be one too many for the Salisbury F.C. board. We put up a brave fight losing 3-2, however after the game they called me into the board room for the second time in a month, only this time I would leave without my job.

To say that this save has ended only three months in, and that this story will now have to end on the same night it began (Awful even by my standards) leaves a bitter taste in the mouth.

I said I'd stick it out to the bitter end and although it came much sooner than expected I have followed through on that promise.

To those that enjoyed this extremely short thread, understand this won't be the last time you see me. I am determined more than ever to be successful in the lower leagues and take a small club to heights not seen before. So stay tuned.

I'll be going away tonight to look through potential new teams. Once I've found a suitor, we will review my mistakes of this time round and go again!
Login to Quote

TheLFCFan
1 year
I think Will says it best...Sure the next one will go much better mate!
Login to Quote

ScottT
1 year
Only you, Aaron... I admire your effort though.
Login to Quote

You are reading "Lily White Dreams".