It was a great month to finish on as we managed it undefeated with only dropping point against Peterhead but this was because we decided to rest a few players for the Aberdeen game. 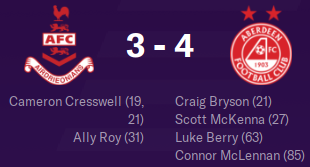 The Aberdeen game was immense as we went 1-0 up through Cresswell cutting in off the left wing then Bryson got the equaliser but within the same minute we had the lead back at 2-1 and looking good value for money for a who 6 minutes before McKenna pops up at a corner and gets it to 2-2. We didn't leave it long though before Roy got us back in front which we held till half time. We just ran out of steam though and Aberdeen showed their class as they ran out the deserved winners.

what a way to finish the season as well with us finally beating our bogey team of the season 4-0.

With the transfer budgets in place we started looking straight away to see who was available and Fraser Aird caught my eye straight away as he brings a wealth of experience from playing in the Championship and is a current international player for Canada.

Next in is a massive coup for a team of Airdrie's size and we bring in Estonia International Joonas Tamm who will be looking to lead from the back and try and use his time at Airdrie for a move to a bigger club.

The youth intake was really poor for a so called golden generation and there were no players that will ever make it close to the first team. 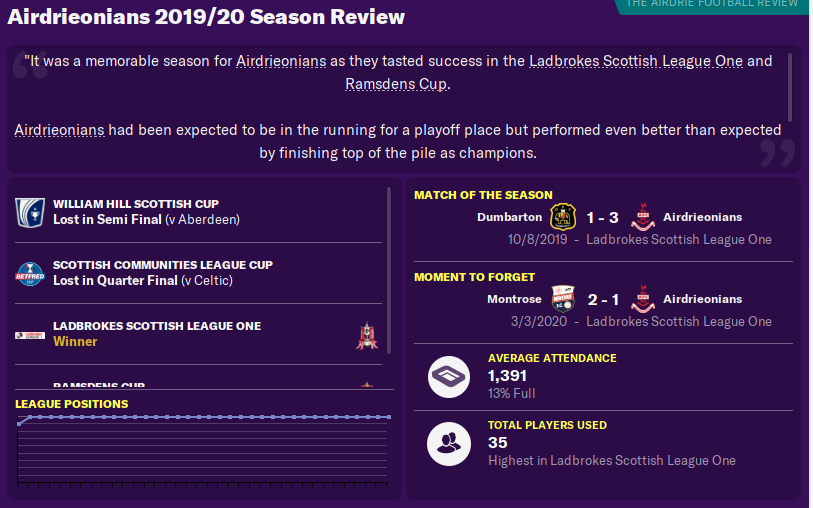 Well it was a hell of a season for us as we exceed all our expectations. We won the double with winning the league and the Ramsdens Cup. We also made it to the Quarter Finals of the League Cup where we lost out to Celtic but the big surprise wasr eaching the Semi Final of the Scottish Cup with us upsetting Motherwell on the way.

It will be a big step up playing in the Championship and it will require a complete rebuild of the squad since a lot of them will be leaving at the end of the season with all the loans finishing or contracts coming to an end and it not being in our interest to renew them to free up wages. 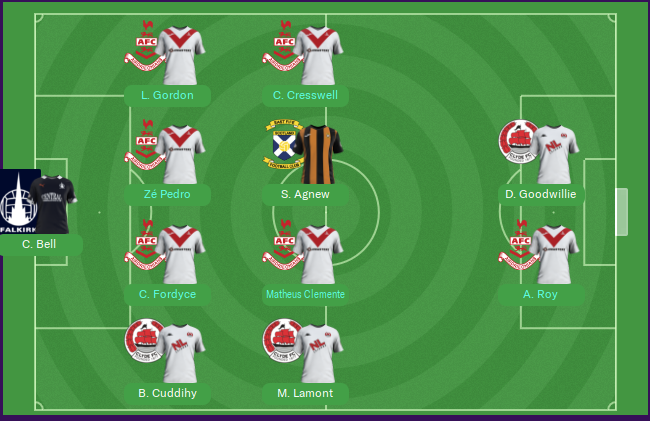 We are eally well represented in the team of the season as we have 6 players in the starting XI.

Everything has a green arrow next to it so we can only be happy with that and hopefully it all continues to grow.

We played some big friendlies at the start to try and get into the swing of things and we came very close to upsetting the odds in them all with a very good draw against Blackburn Rovers. We also have the traditional Ramsdens Cup Group matches as well which we of course use as friendlies. We do extremely well with getting a 100% record across all the group matches which is impressive with the amount of chances we've made to the squad over July and into August. We should take these results and really push on in the league as well. 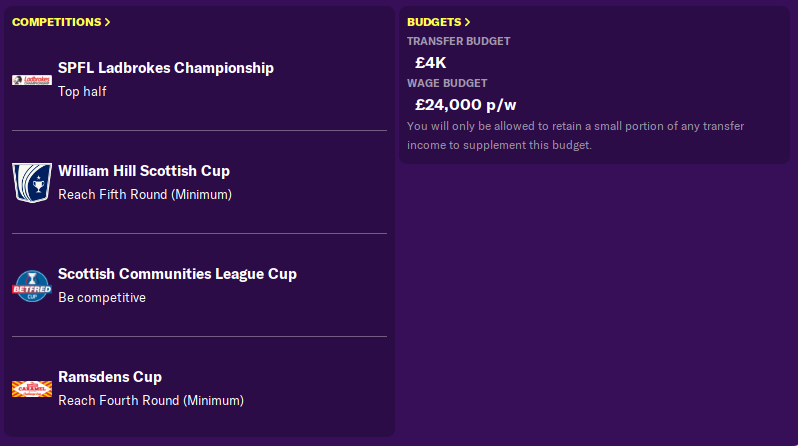 I really feel we should be pushing for higher than just the top half of the league as I reckon with the squad we have we could even play in the Premiership and avoid relegation. In the cups it should be ok as long as the draws are in our favour.

Not the best start to the league having to play Falkirk, Motherwell and Dundee but we'll give it our best shot.

We let 3 players go permanently to bring in a bit more cash to enable us to add a bit more to the squad as well. 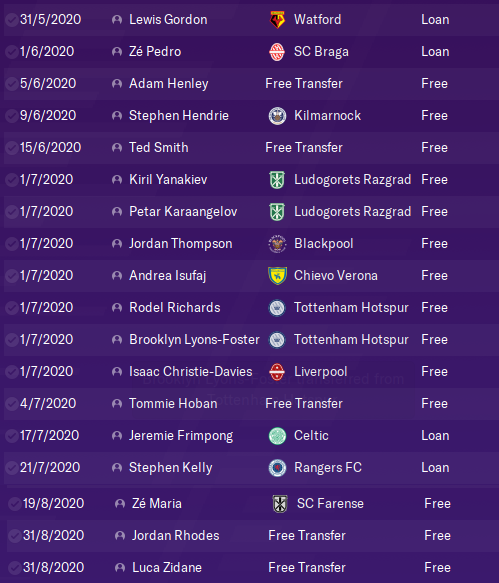 Now with the number of loans that ended last season and the number of players we let go at the end of the season when their contracts ended we really needed to sign a whole new squad that was able to compete at this level and I may have gone a bit mental and signed 18 players.

The two biggest signings of the window came on Deadline Day as we managed to somehow bring in Jordan Rhodes who should score for fun in this league and Luca Zidane who will be taking over the number 1 jersey and being the main goalkeeper for a few season. Other key transfers were Tommie Hoban, Adam Henley and Stephen Hendrie who are all far too good to be playing at this level. The rest are all young players who should improve and be with us for a few years or allow us to sell them on to bring some cash in.

The season ticket sales have doubled but its still far too low for a 10,000 seater stadium so hopefully it will continue to grow as we improve.

Imagine
1 year
You done fantastically well across all competitions last year, well done! Some of those signings this season too... WOW! Rhodes, Hendrie, Frimpong and Zidane should all be excellent and fire you towards another title challenge.
Login to Quote

We start off against our old foes from last season as we start against Falkirk and it couldn't of started any better. 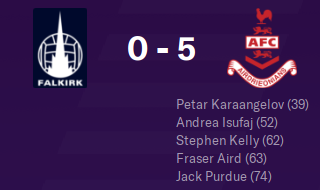 Our new signings are really gelling and it certainly shows as 3 of the scores have only joined in the summer. Its always good to see the transfers pay off from the start and not have to get use to the league. After that everything just continued to fall into place as we then manage to beat recently relegated Motherwell and then Dundee. Our new signings just keep paying off with fantastic performances. We even make it through the League Cup 2nd round by the skin of our teeth as we come from behind to beat Queen of the South with Tamm getting the final goal with 5 minutes to go.

Imagine Cheers the draws in the cups were all pretty kind to us which helped a lot. With the transfers I'm not really sure how we managed to attract some of them but I'm not complaining. Really hope Rhodes is able to tear it up.
Login to Quote

September brings the first international break so it gives us a nice short month that will come back to haunt us towards the end of the season. The Dumbarton game was tougher than expected but luckily Jordan Rhodes gets a dream debut and scores the winner. 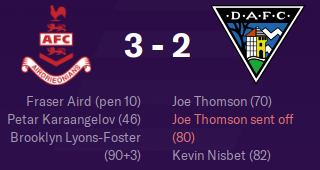 The Dunfermline game had a bit of everything. We looked Good value at 2-0 up and then did our best to throw it all away. Luckily though we keep fighting right until the very end and Lyons-Foster rises the highest at the corner to tuck it away in the bottom corner with the last touch of the ball.

Next up we face Celtic again in the Quarter Finals of the League Cup but we go down fighting and lose 2-0 which is at least a goal less than last season. We bounce back straight away though with a good win against recently relegated Ross County.

We manage to secure another undefeated month and we are looking good for back to back promotions. The real highlight of the month though it to only concede 1 goal in 5 matches in the League. The squad has really come together now and I'm looking forward to the cups and being drawn against some bigger teams now to see how we are able to compete. We had the joy of travelling down to Solihull to play in the Ramsdens Cup 4th round but luckily we come away with the win and march on to the Quarter Final to keep our defence on track and will welcome Queen of the South to Airdrie.

With my contract expiring at the end of the season they have finally seen fit to reward me with a new contract that will keep me at the club until 2023 now which always helps when trying to achieve the goals I've set out.

We have a nice quiet month with only 4 games and we do exactly what we need to do as we go undefeated. In the league we only managed 4 points out of 6 as the journey up to Arbroath was just too much for as and we just couldn't break them down but it was always going to be hard in the wind and rain right on the edge of the North Sea. In the cups we have managed two good victories to end make it through to the Semi Final of the Ramsdens Cup and the 4th round of the Scottish Cup.

Another month undefeated as we must now look odds on favourite to be going up as champions now as we hold a 16 point lead at the top of the table over Motherwell. The only blemish was a hard fought draw down at Somerset Park in Ayr.

It really was a game of two halves as the first half saw us go a head twice only to be pegged back with the final on being right on the strike of half time. The second half was the complete opposite as Ayr's 2nd took the wind right out of us and we just couldn't get back into the game again after that.

You are reading "Airdrieonians F.C. A Diamond in the Rough".