OmegaLuke
1 year
Nice one fellas! I like the concept too!
Login to Quote

Imagine
1 year
Excellent form in that last season there, great work lads. Very swift climb up the leagues for a new side too.
Login to Quote 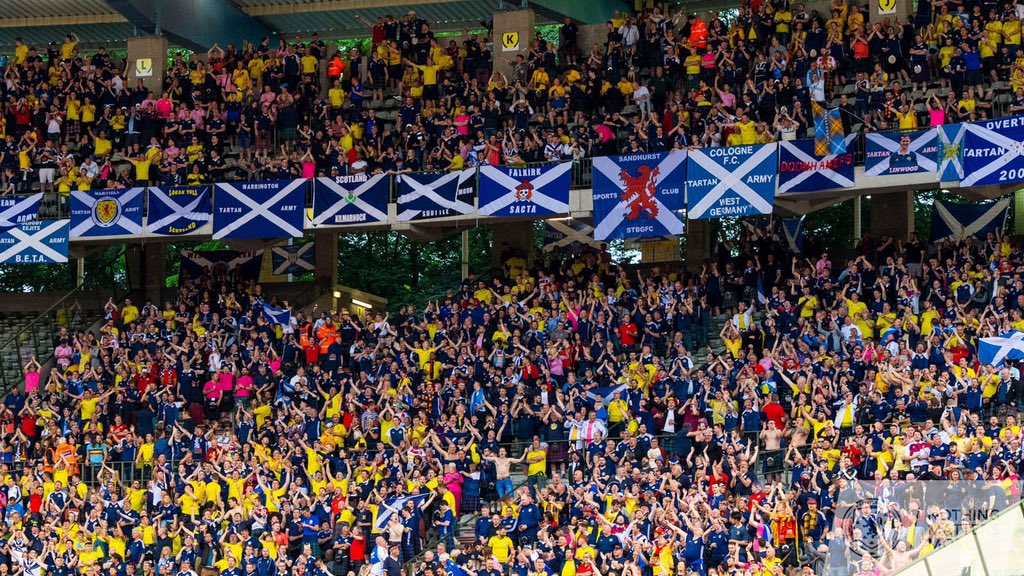 A new season brings new beginnings, but also...A new league! That's right after our phenomenal effort from last season where we got ourselves promoted we'd be finding ourselves in the Scottish Championship where we'd have all the odds against us as we'd try to find out if we really are good enough for this level of football.

Before the season began there were many improvements to be made and this task was left in the very capable hands of Scott who helped us get promotion in our second season from League 2.

First up for the team was the Betfred cup in which we put on a show for the fans absolutely thumping everyone in our group with minimal effort.

Motherwell, Partick...None of them could cope with our boys and we went through to the next round in brilliant form. This momentum would be so important going into the league. 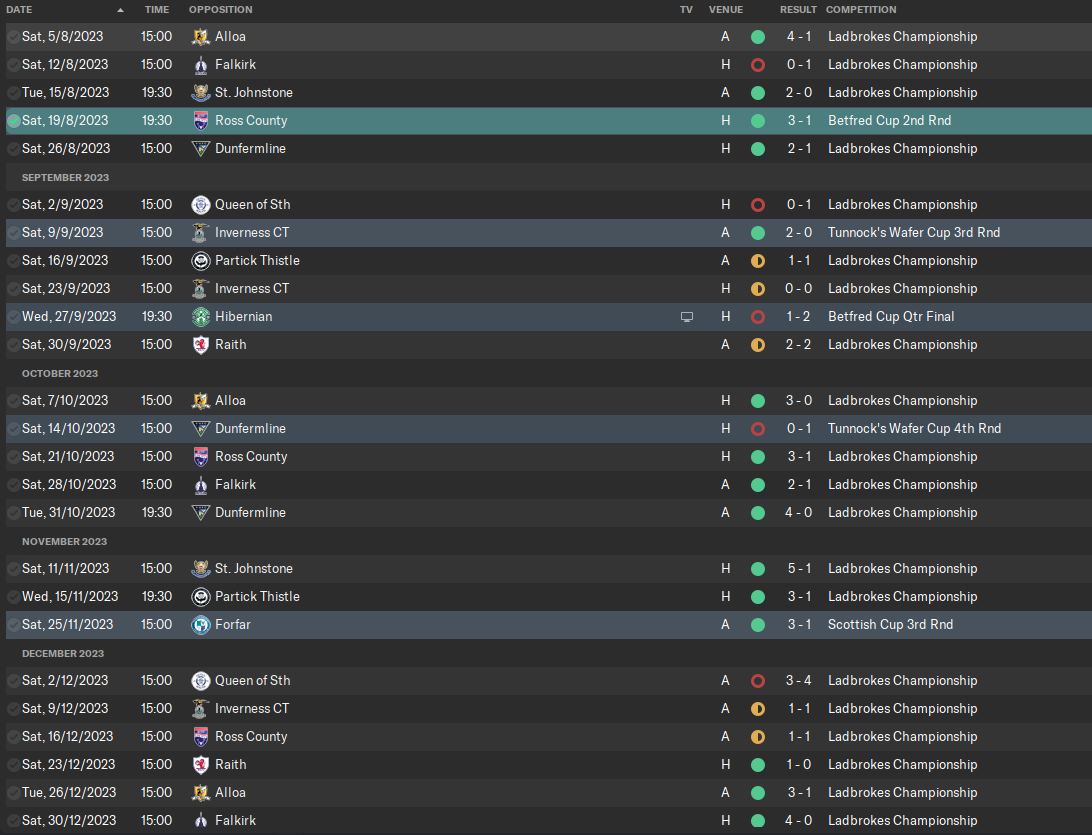 And the form carried on into what blossomed into a wonderful start to life amongst our new surroundings. Enough wins in there to actually put us 4 points clear at the top of the league! In our 5th season, could we do it? Could we get promotion to the Premier League and fight against our big city rivals Rangers and Celtic next year?

well, it's down to Scott's second half of the pairing - Syb We've got a massive second half of the season ahead of us and Syb's proven already just how capable his management can be so with a bit of luck here and there, we'll find ourselves in Scotland's top division!

In the great words of Steven Gerrard, I had one job and one job only. Don’t let it slip. After ScottT managed to get us into a good position for promotion. We had to keep the run going and get ourselves into the promised land, which is better known as the SPFL.

We started off incredibly well, despite losing our assistant manager, we managed to get 3 wins and a draw in 4 league games alongside a convincing win in the cup. February on the other hand was tough. Only 4 points from the 4 games and we had to play Queen of the South twice in order to progress to the quarter final.

The heat was starting to come to me. Ross County was closing in on us and the month of March didn't help with that at all. Only 6 points from a possible 15 and a tough loss against our rivals Glasgow saw Ross County creeping back to us. We needed to clutch up in the final 3 games and we did. 3 wins, 3 clean sheets saw us beat out Ross County and thus win the league.

The SPFL is coming to Area 52, and it'll be up to TheLFCFan and later on Aaron to help us stay up, certainly not an easy task, but I'm confident.


Get baited, Scott
Login to Quote

Having only been founded in 2019, it has taken Irn-Bronx just five short seasons to be promoted to the Scottish Premiership. Off the back of ScottT and ImThatSybGuy great work last season I was passed the save, with the initial target of putting us in position to stay in the league, something the bookies didn’t believe we could do.

Despite a great effort in getting promoted, I didn’t believe the squad was good enough and in particular lacked in depth for this level of football. With this in mind, nine players joined the club with five leaving. 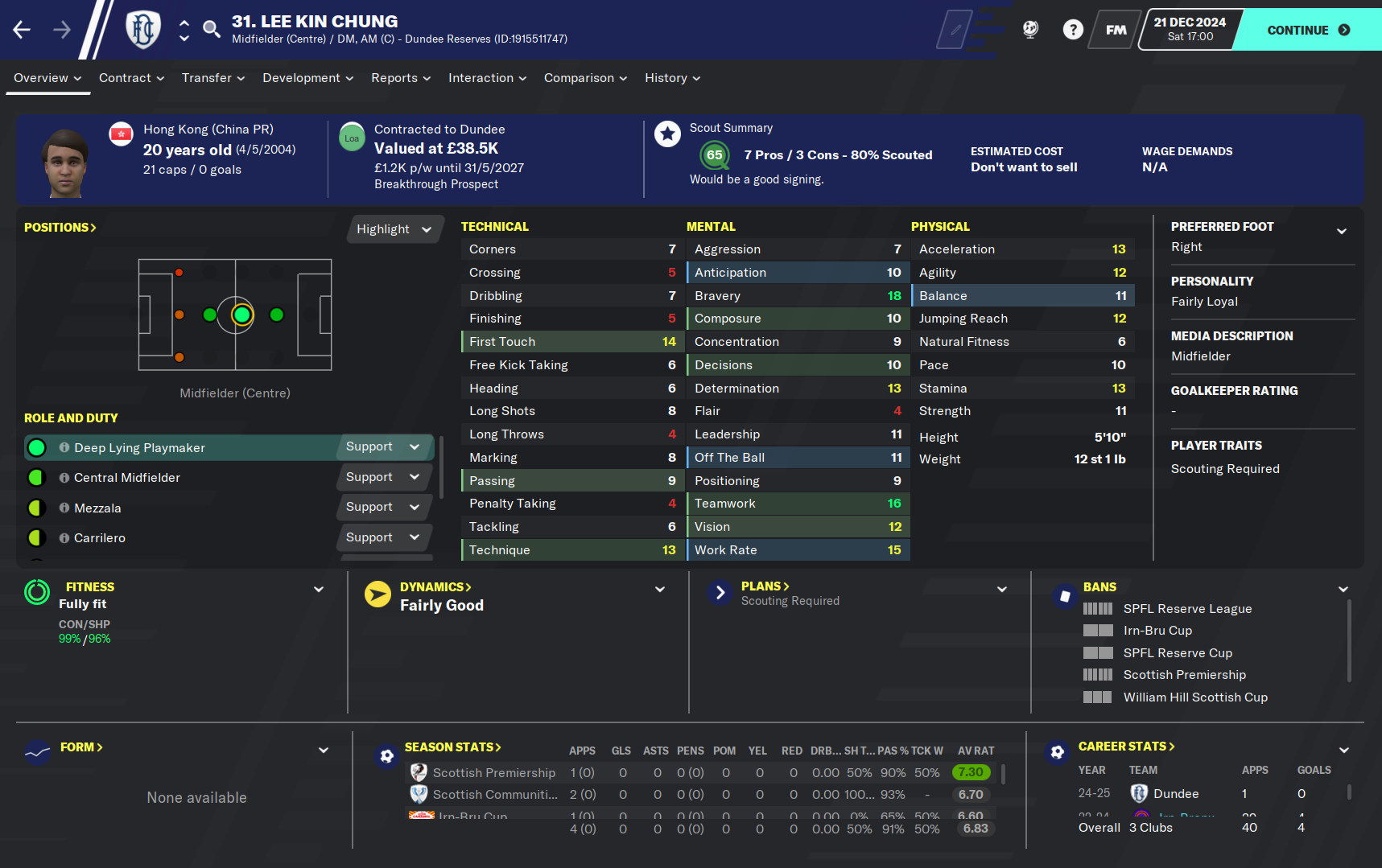 The first player to leave was Lee Kin Chung in a deal arranged before I had received the save. I was disappointed to see him go as he looks like a very good player who at just 20 already has twenty-one caps for his country. 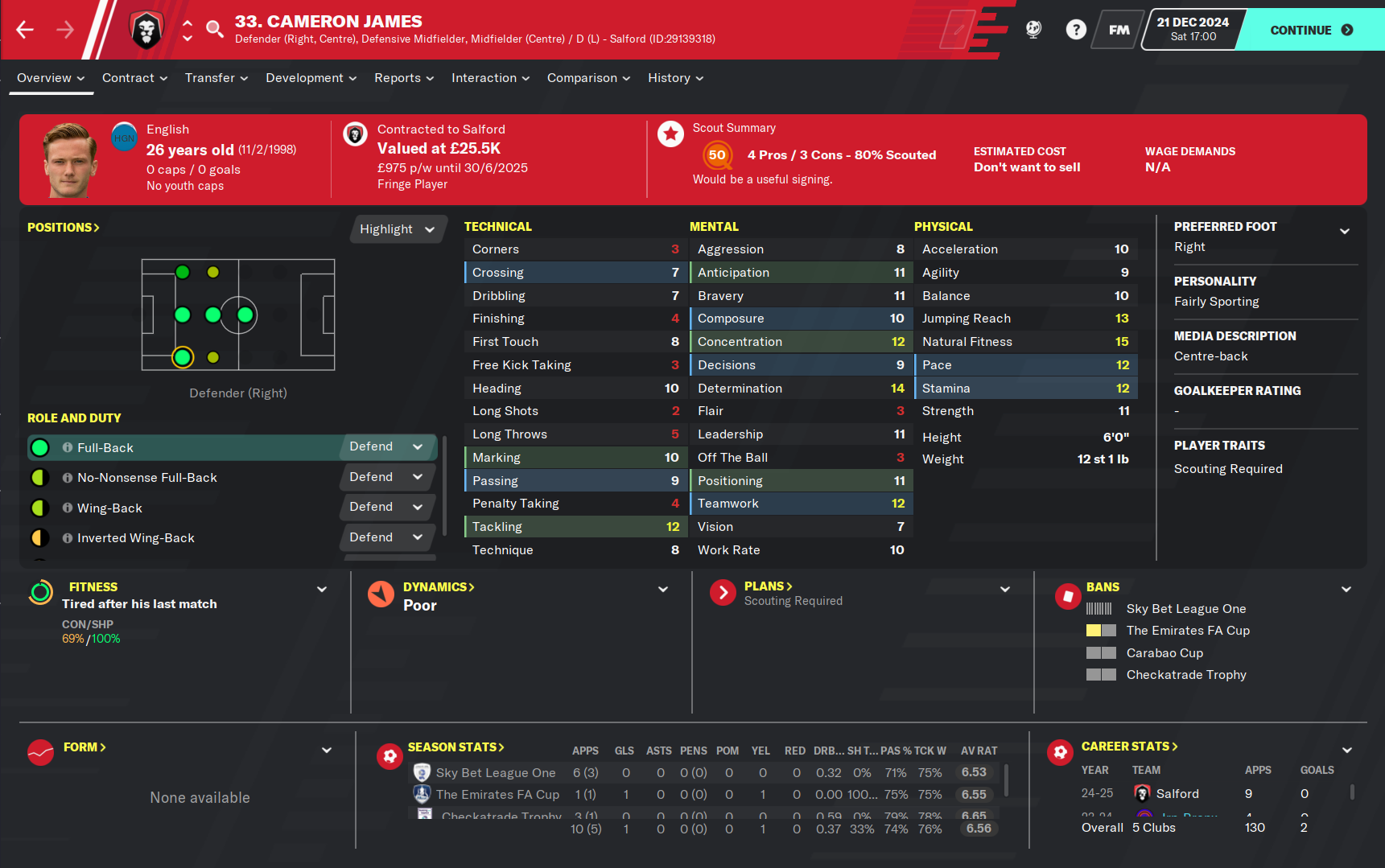 Next to leave was right-back Cameron James, who had been kicking up a fuss and asking to leave the club. With the need for a strong, tight-knit group to stay up, I was happy to see James leave the club in a deal worth £27,500 to Salford.

The remaining outgoings were players who have left the club on loan due to not receiving enough game time during the season and being upset. As previously mentioned I value a strong dressing room atmosphere quite highly and those players were allowed to leave on loan. 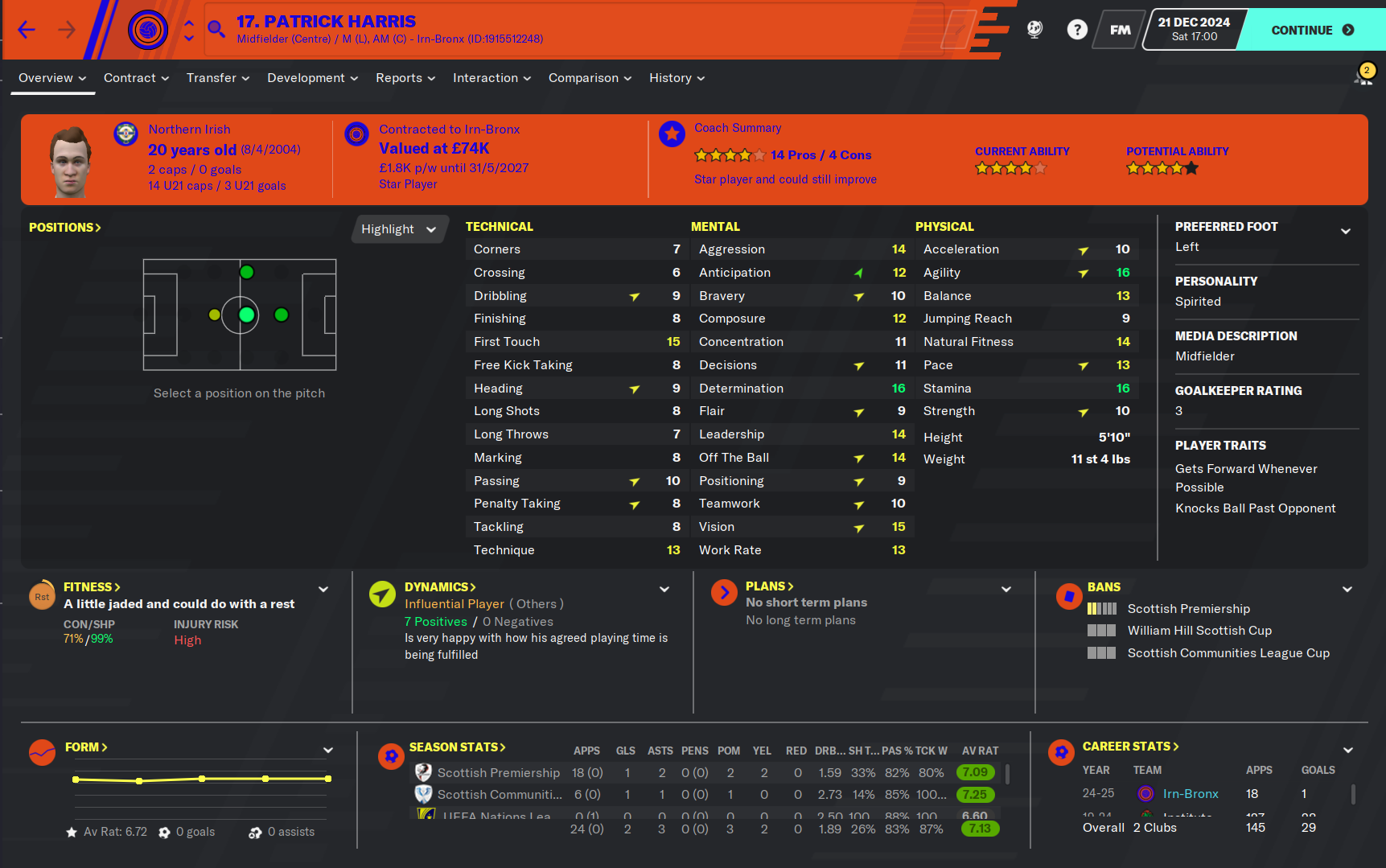 The first player who was signed under my second time with the save, is Patrick Harris, a Northern Irish central midfielder. He joins the club from Institute, in his country of birth, on a free, with compensation costing £51,000. At just twenty, Harris is a very talented player who will be a key player for the team for many years in my opinion. Since joining the side, he has made his Northern Irish debut and I am looking forward to seeing how he develops. 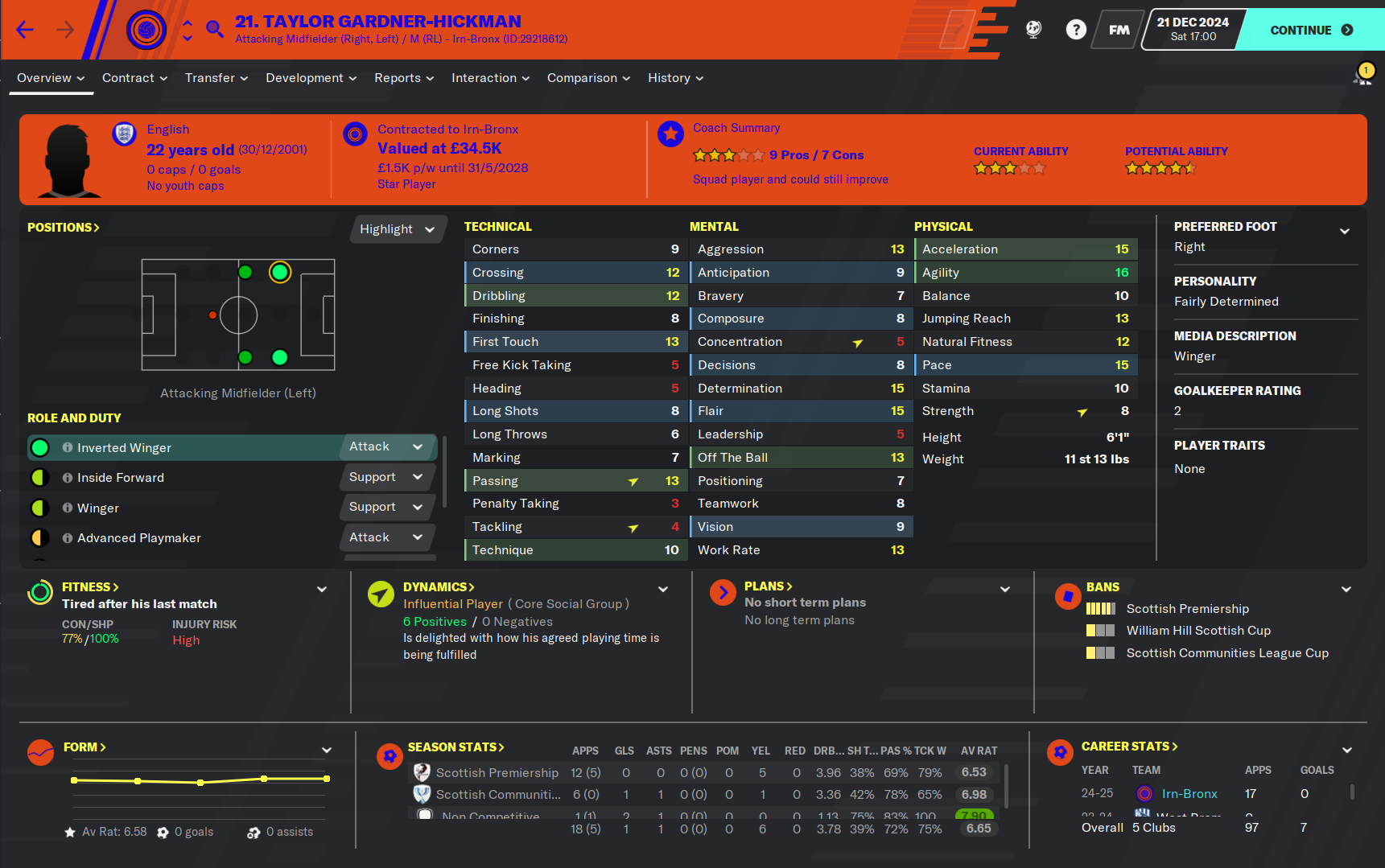 Joining Harris through the door is Taylor Gardner-Hickman, who joins the club from West Brom, having made his way through their academy side. Hickman joined on a free as a starting left winger who had really impressed the scouts. Unfortunately it looks as though they had slightly over hyped the 22 year old, but at a young age he still has time to develop. 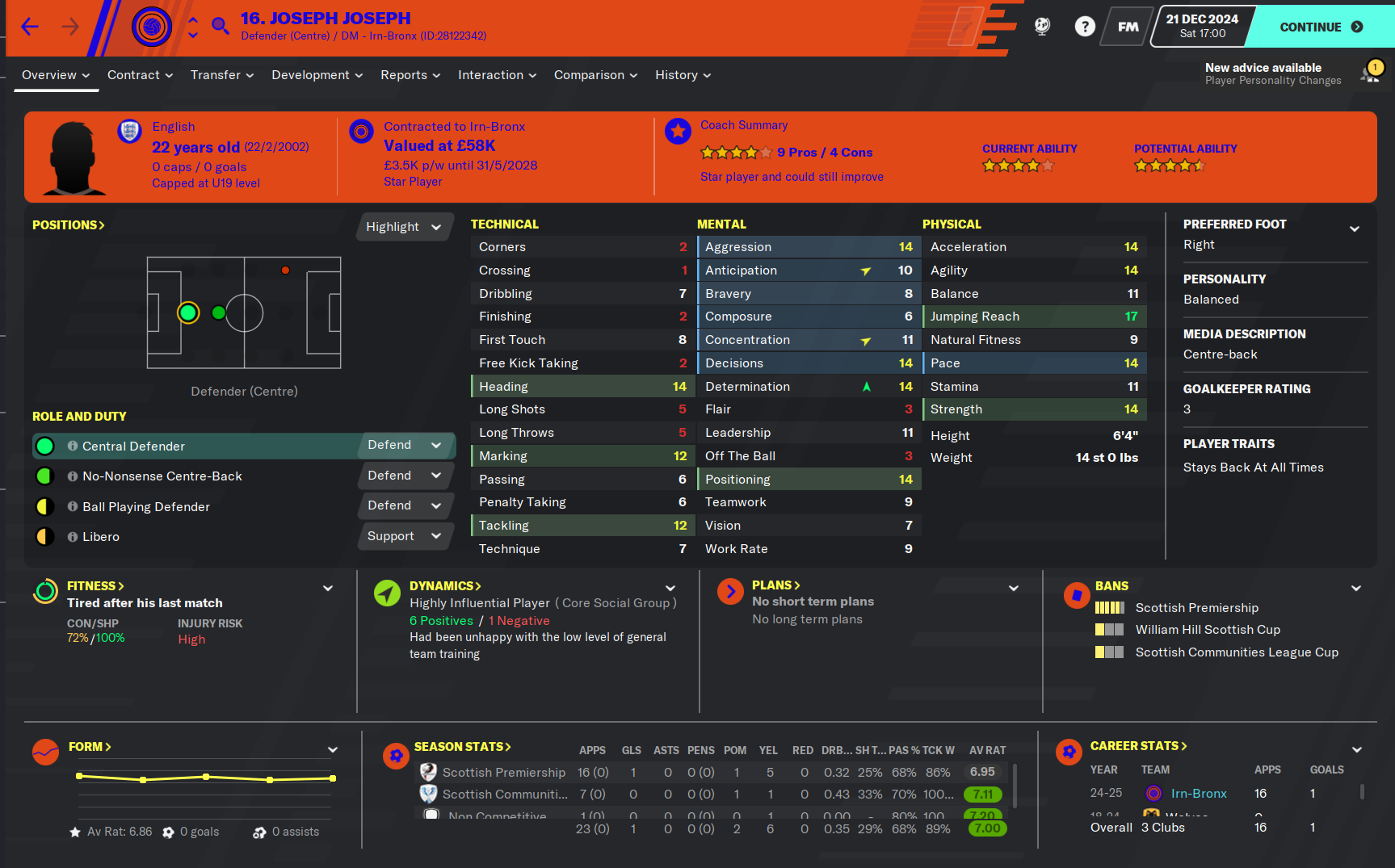 So good, they named him twice. Joseph Joseph was picked up from Wolves on a free transfer and is an absolute rock at the back. Our joint highest earner, Joseph was just what we needed to base our defense around, something that would be key to any success we had this season. Had it not been for this next player, Joseph may have been my favourite signing. 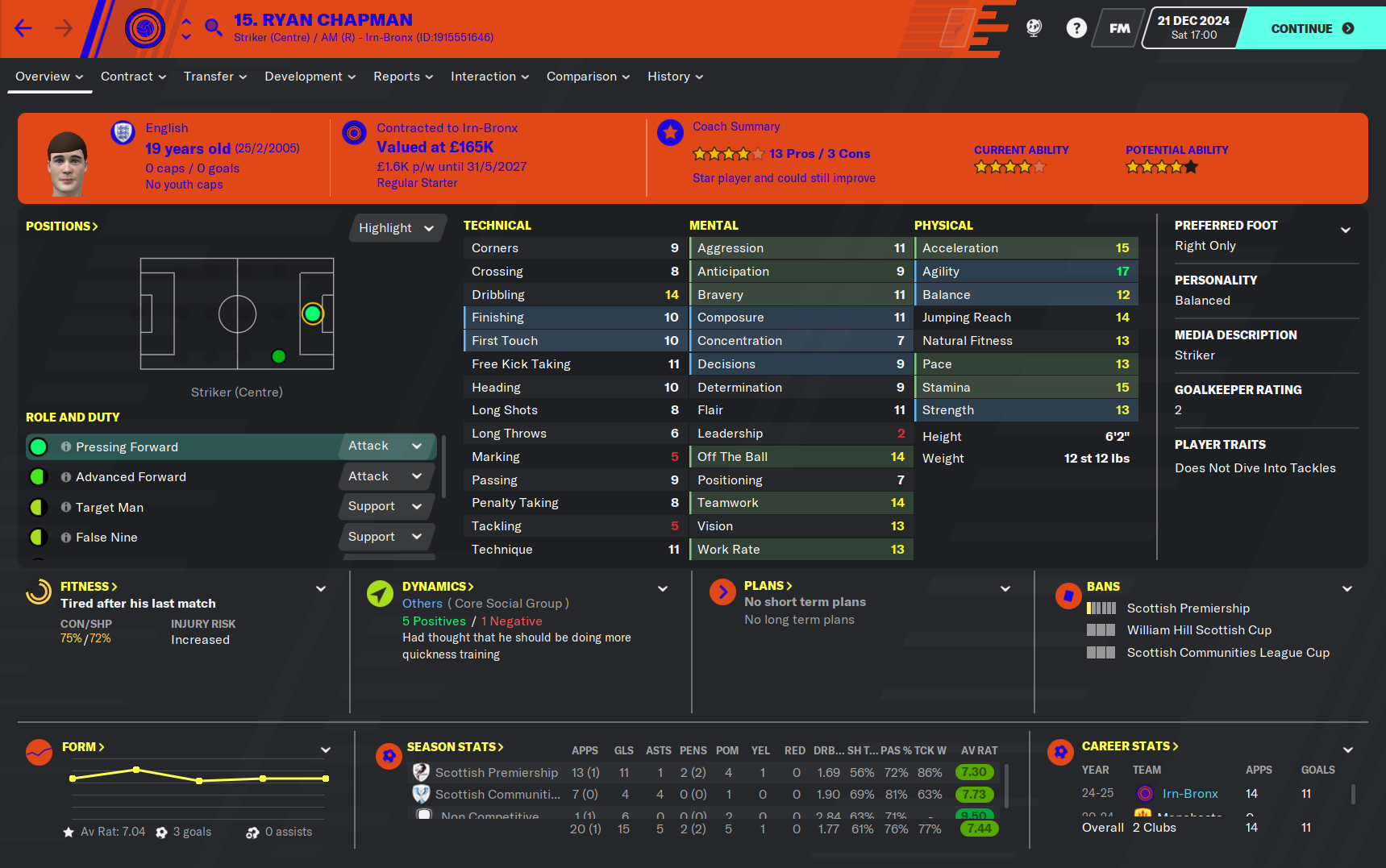 As previously mentioned, my favourite signing on this save so far, and quite possibly my favourite in FM20. Chapman joins us from VARchester United

in a deal worth £25,000. He has paid it back in bucket loads already. The eagle eyed of you would have seen his goal scoring return of fifteen in twenty in all competitions and I truly believe, if we can keep a hold of him, Ryan will be one of the Irn-Bronx greats. 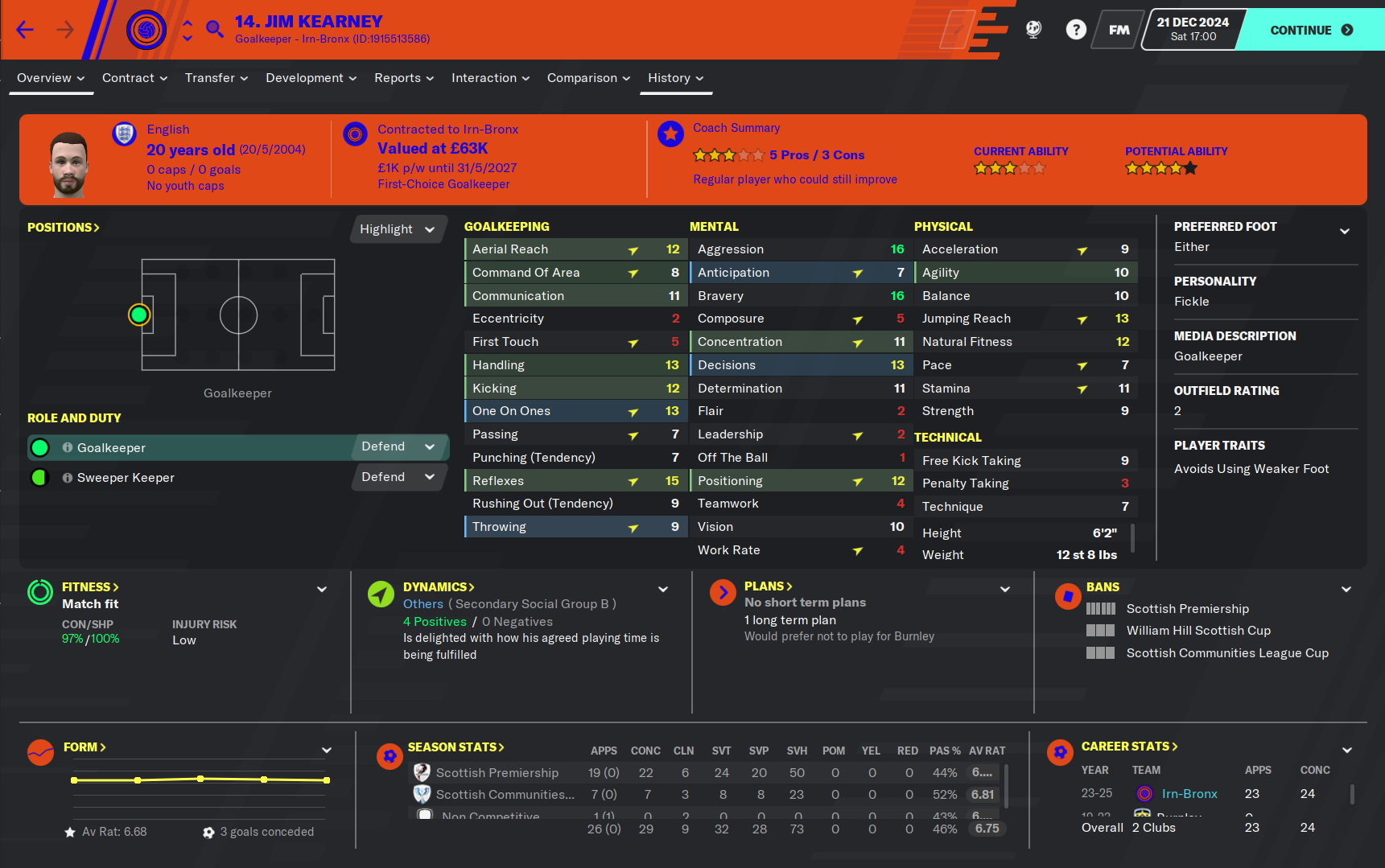 Having spent the season on loan last year, Jim Kearney saw his contract not get an extension at Burnley, so we swooped in. Still only 20, Jim looks a fine talent in between the posts, and has already kept nine clean sheets in all competitions this season. Once again, with some development, Kearney is a really exciting prospect. 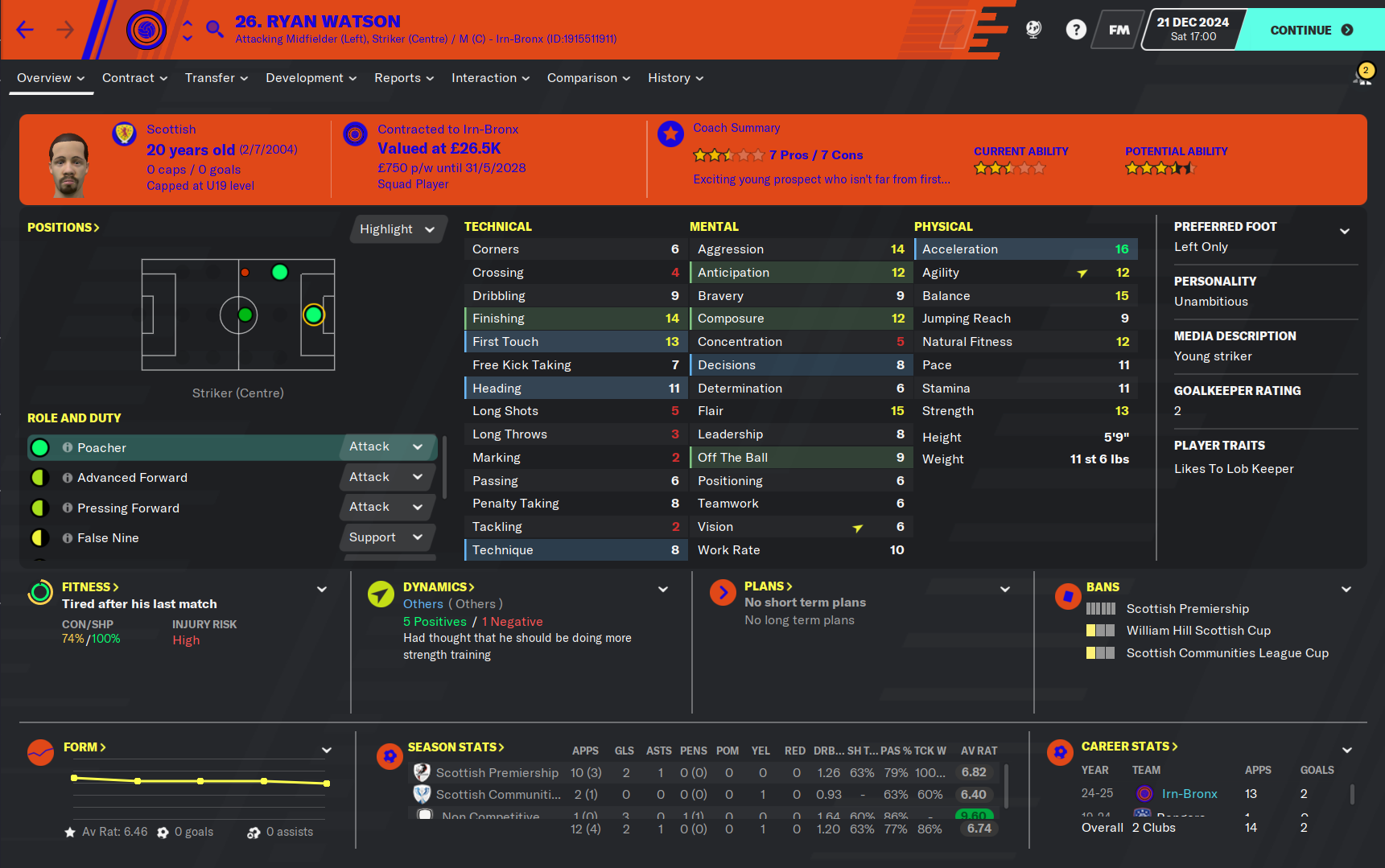 If you hadn’t worked it out by now, the theme of my signings are certainly young players with stacks of potential. Ryan Watson yet again fills that description. Signing from local rivals Rangers on a free transfer, Watson is the perfect backup for our dazzling strikers, in Chapman and Callum Sweeney. Unfortunately injuries have slowed Watson down so far this season, hopefully he will be able to overcome them soon enough. 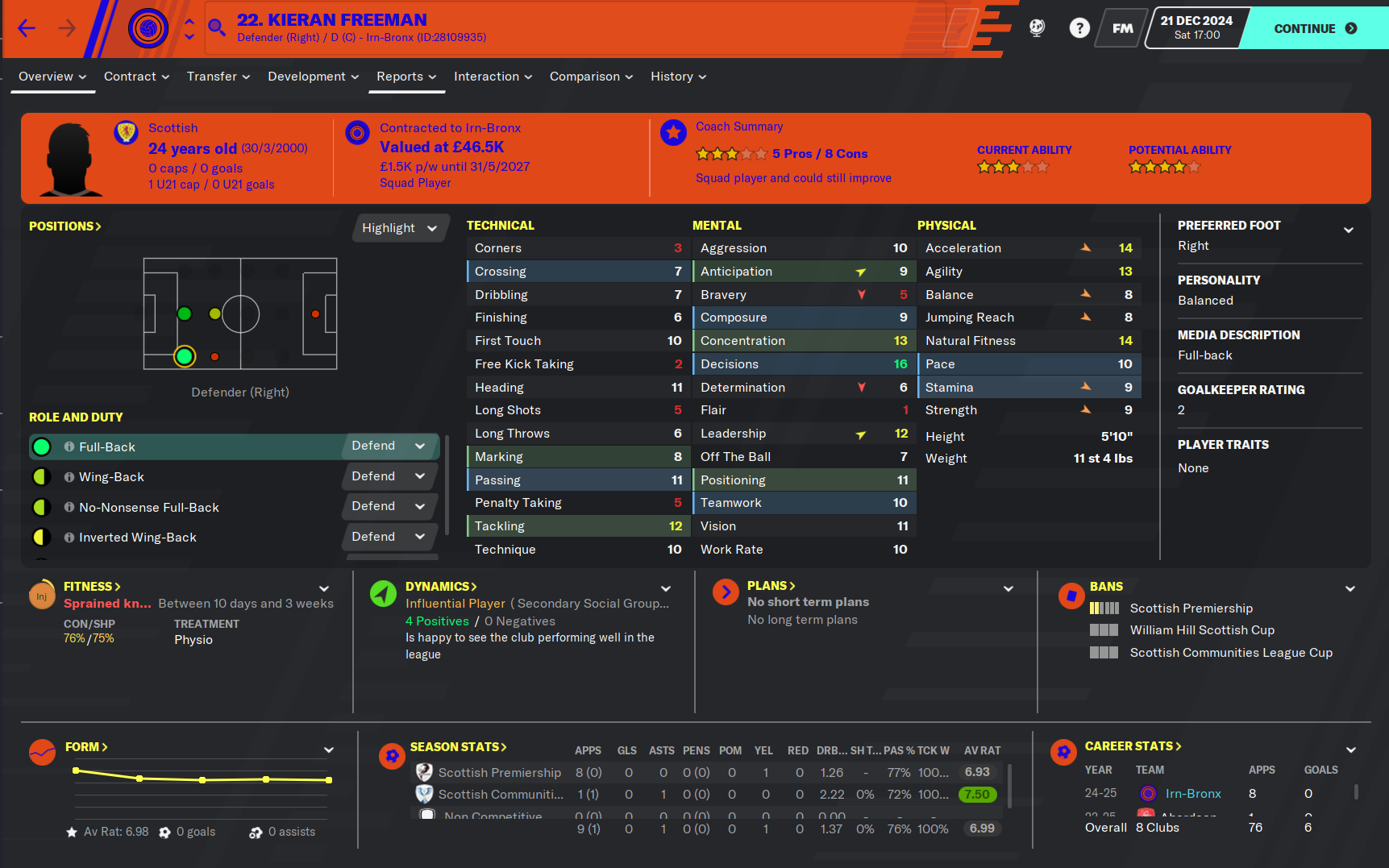 Probably my worst signing, Kieran Freeman joins for £10,000 from Aberdeen in the hopes he would be a starting right back. Another player who has suffered with injuries, he has seen limited game time this year and I think we may need to invest in a different option in the near future. 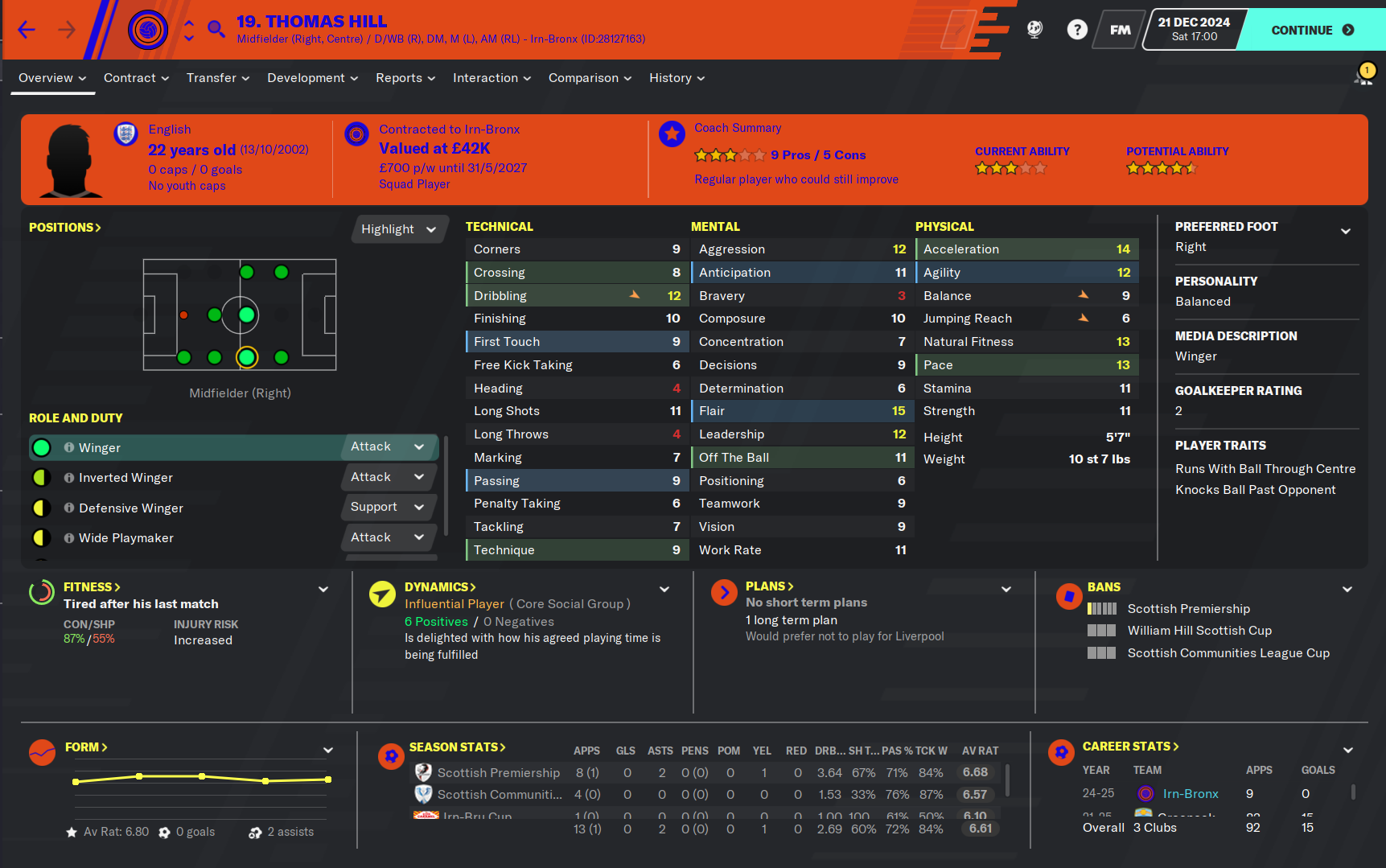 A player who is able to play in almost every position in the midfield, Thomas Hill joins us for an admittedly pricy £30,000. The rightwinger was somewhere we desperately needed improvement and I gambled on the former Liverpool youth player. Still young Hill has time to develop, but like the man behind him at fullback, we may need to look at improving on that side of the pitch soon. 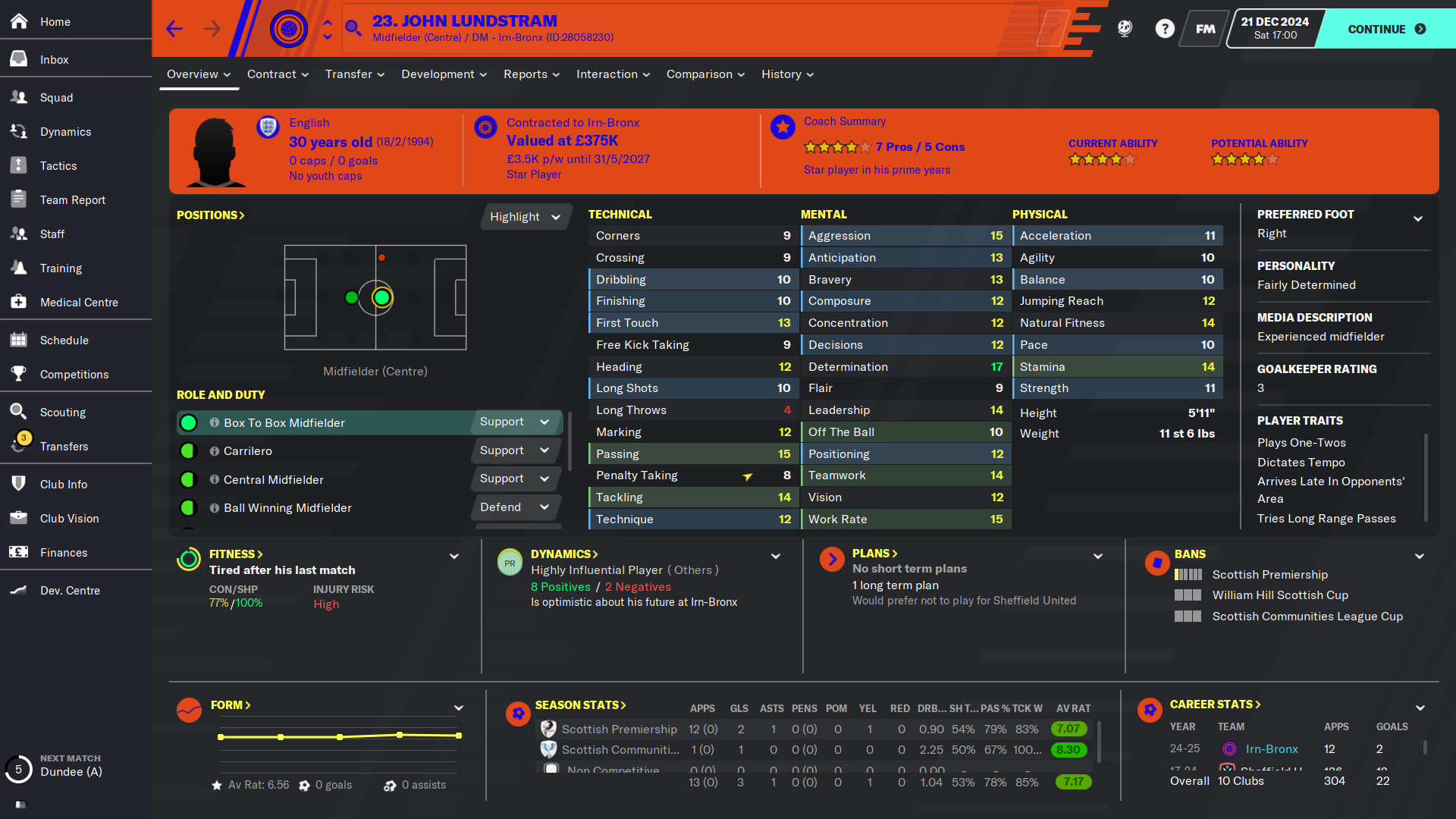 John Lundstram, or Lunny as he is more affectionately known around here, joins us on a free having appeared on a scouting report. He was just too good to pass up midway through our first season. With Seb Ross struggling with injuries and Patrick Harris in need of a talented partner, Lunny was the one. He has already starred for us and I am very pleased to have him at the club. Aged thirty, I doubt I will be able to have him in my next run with the club, but I hope everyone else enjoys their time with him. 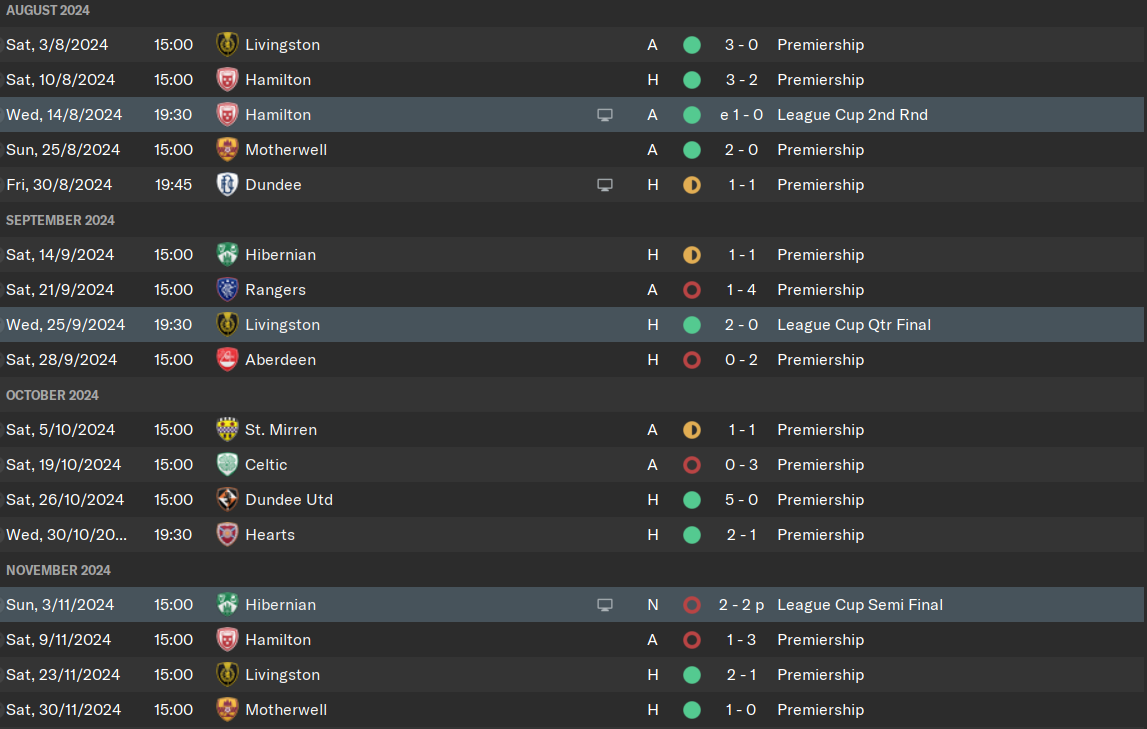 With not much time between the start of Pre-Season friendlies and the League Cup group stage starting we had a single friendly to start off with a 4-0 victory over Blyth Spartans. We then marched through the League Cup group stages and I was impressed with the quality we were showing. The St Mirren game was our first test against Premiership opposition and perhaps naively I went attacking as I had in the previous games. Going behind early I reverted to a slightly less attacking mentality and it almost paid off. Despite the loss it was a good early indicator of what we needed to do to be successful this year.
We certainly impressed early on, going unbeaten in our first five league games, thumping Livingston in the first game of the season. Rangers bought us back down to earth as our form dipped losing to them, Aberdeen and Celtic in our next four league games.

Ryan Chapman then scored his first hattrick to bring some smiles back to the Area 52 stadium as we beat Dundee United 5-0. A crazy penalty shootout loss of 12-13 to Hibernian saw us knocked out of the League Cup at the semi-final stage which was followed up by a disappointing loss to Hamilton.

Three wins in a row was then followed by a very tough month including games against all of the top three, plus games against 6th and 7th. We fought hard for points against Rangers and Aberdeen, but Celtic and St. Mirren was just too strong to end my time this season.

Nevertheless, we can be very happy with where we stand at the moment, sitting in a European spot in our first season in the top tier, mainly down to the goals of Ryan Chapman. With history showing to stay up you need around 35 - 40 points to stay up, we are certainly primed to be playing here once again next season.

I now pass the save onto Aaron and believe he will be able to do great things with the team!
Login to Quote

Imagine
1 year
Great start to the season there, top six almost inevitable and what an achievement that'd be in the first season in the Premiership.
Login to Quote