What a month as we get our first ever unbeaten month. We claim a bit win over Inter to get through in the Coppa Italia. We were really made to work for it as Inter went ahead through a penalty in the 35th minute. I had strong words with the team at half time and it seemed to work as Cuenca got the important goal in the 66th minute to get us back in with a chance. Its the usual man who wins the game for us with an excellent brace in the space of 5 minutes to win the game 3-1 and see's us into the next round to play Roma.

hot off the back of the Inter game with the team full of confidence Esposito gets the only goal of the game to get the 3 points from Fiorentina. We held onto this confidence right through to the Roma match where Gomez got us off to a great start when he scored a screamer in the 30th minute. After half time Almada got brought down in the ox just before he pulled the trigger. He got the best of them though as he slotted home the resulting penalty. Cuenca then rose above the defence to nod home in the 89th minute to see us through to the Quarter Finals.

We round off the month with a good win against Atalanta where Esposito and Marin get the goals for us before Toloi pulls one back. 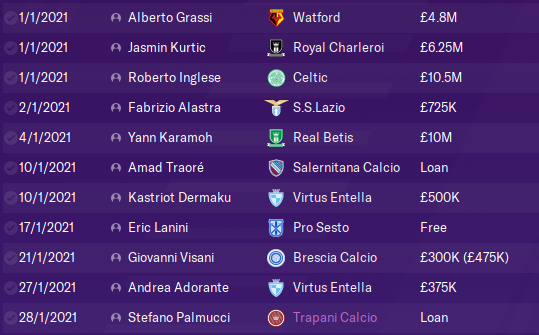 We shifted a lot of dead wood from the club to free up some transfer cash and wages to help strengthen the squad.

We work hard during the transfer window to search out and bring in players where necessary. The big signing of the window though has to be Jerome Onguene from Salzburg and we activate his release clause to bring him into shore up our defence. We also moved to make Vignato for £10 miilon. On deadline day we also brought in Tripaldelli on loan with a future transfer fee of £3.7 million being optional. Fianlly we bring in Moussa Wague on loan from Barcelona on loan with again a future optional transfer fee of £7 million. I see him as a natural replacement for Darmian who we will probably look to sell at the end of the season.


ScottT Fingers crossed as it will be the start of being able to get some decent cash into the club. Yeah they shipped out a lot of players in the summer.
Login to Quote

ScottT
4 days
What a run of form! A terrific month of football and some very good business conducted over the course of the window. The most encouraging thing to note is the gap you've established over the sides outside the top four.
Login to Quote

It one of our busiest months yet as we play 8 games this month. We better get use to it though as I want to be getting into the later rounds of European Football going forwards. 4 of the games are made up of the Coppa Italia Semi Final and The Europa League 1st Knockout Round. First up in Atalanta in the first leg of the Coppa Italia and it just doesn't go to plan as Atalanta gets a deserved victory after we play the majority of the game with 10 men. Just as well the 2nd leg is played in front of our own fans so we're still in it. The Lazio game was disappointing as well as Vignato got us the lead on the strike of half time. but Lazio came out raring to go and Sepe fumbled the ball into his own net in the 51st minute Marusic then gets the winner 10 minutes later.

Now we turn towards the Europa League where we travel to Portugal to face Braga. Esposito gets us off to a great start with a well placed finish in the 6th minute. We looked good value and had plenty of chances but just weren't able to take them. Eduardo then pulls the goal back meaning the 2nd leg will be important. The usual tough match after a EL game and this time its Inter. Vignato gets the break through after 41 minutes with an excellent run while cutting in from the right. Barella then pulls it back from the penalty spot in the 61st minute. Baro then gets the winner in the 78th minute which was probably unfair on Inter as it was a pretty even game.

Next up is the 2nd leg against Braga where Almada gets us off to the start we wanted again as he scores the only goal of the game in the 8th minute to see us into the 2nd knockout round which sees us meet our expectations of the board. Against Torino we got extremely luck as they took the lead through Ansaldi in the 27th minute. We left it late as Espoito gets the equaliser in the 85th minute to snatch a point.

It was a late deal in the Chinese transfer window but when Tianjin Teda offered us £15 million up front and another £5 million over the next 2 years then I bit their hands off to take it. We will be re-investing the money to bring in the players who have future transfers arranged at the club.

TheLFCFan
3 days
An incredible first two seasons here. To get Europa League year one then make some brilliant additions in Gomez and Tonalli in particular and pushing now for Champions League. Very impressive. Keep it up!
Login to Quote

ScottT
2 days
Progression in the Europa League and advancements made in the league coupled with a spot in the Coppa Italia final. You're not doing too badly!

Villarreal didn't stand a chance as we travelled to Spain as Esposito is showing how good he is with getting the opening goal in the 9th minute with Almada putting the game to bed in the 78th minute to give us an important 2 goal lead going into the first half. With the Napoli game we rotate where necessary to make sure we're good to go for the EL 2nd leg. It sadly doesn't pay off as Fabian scores 2 good goals before Gomez pulls one back for us.

Villarreal makes us work for it at home as it takes until the 67th minute for Esposito to make the break through with a well placed shot. Vignato gets the 2nd in the 75th minute before Baro finishes the game off nicely with a goal in the 88th minute.

The Verona game was a game of two halves with all the goals coming in the first half. Fabio Borini put Verona into the lead after 36 minutes but our young striker Espositp grabbed a quick brace in the 43rd and 45th minute to grab the win. The second half was a boring half as things go. Benevento we through away the lead early on again as well but Esposito is at it again with the equaliser just before half time before Bettella grabs the winner in the 68th minute.

The youth intake is the best time of the year as we have 2 players who look might make the cut in the future. 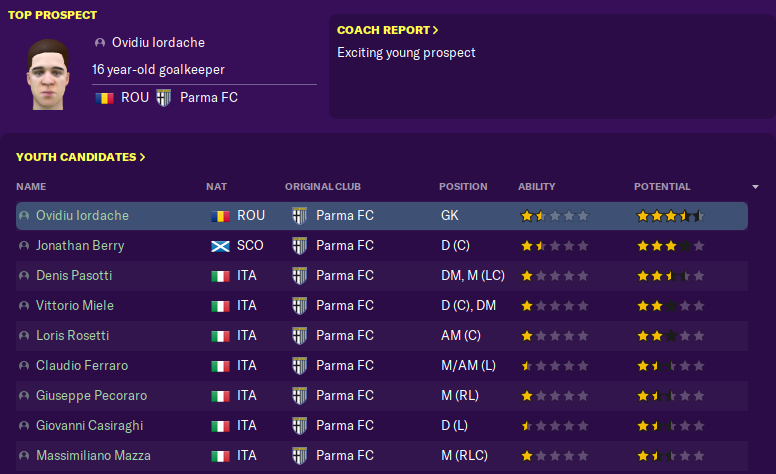 The main standout plyer though is young Romanian Ovidiu Iordache. Could be be the next goalkeeping great to come out of the Parma youth ranks after Buffon.

With the money from the Darmain deal we have agreed to sign Moussa Wague and Alessandro Tripaldelli on permanent deals after impressing so far on loan. We have also agreed to sign Maxime Lopez on a free from Marseille in the summer who will provide additional back up to the central midfield roles.

TheLFCFan Thanks, everything is going well just now so fingers crossed it continues.
ScottT Yeah all going well so may it continue
Login to Quote

ScottT
1 day
Very good work as per usual. The incoming deals are excellent too.
Login to Quote

The month does not make pretty reading. WE get off to a decent enough start against Trapani as we race to a 3-1 victory. In the Europa League Quarter final 1st leg Napoli they were just too much for us as Insigne gets the only goal of the game in the 55th minute. The 2nd leg will be tricky going away from home.

Our players seem to be suffering now we're getting to the end of the season and rotation is a must now to try and make it to the end in the Champion League spots. Against Sassuolo Caouto gets the only goal of the game to cost us 3 points. Next is the 2nd leg against Napoli. We get the only goal of the 90 minutes from the penalty spot from Almada to take the game to extra time. 6 minutes into extra time though Hirving Lozano got the breakthrough for Napoli to see them into the Semi Finals.

Next up in the league is Roma who again we take the lead from the penalty spot in the 27th minute through Almada and we looked good value for a big win until Veretout scores from the spot in the 80th minute before Under grabs the winner for Roma in the 85th minute. Out legs went and we couldn't get back on top.

Next is our first cup final against Lazio and they get off to an early start with Immobile getting the opener after 9 minutes. Varnier then pulls it back after 16 minutes. Marco Asensio then grabs a brace across 4 minutes to put Lazio in a very stong position. After giving the boys a bollocking at half time and Bettella gets the 2nd goal in the 51st minute. Things then look to be going our way as Marusic gets a red card in the 55th minute. We jut can't get the goal though as Lazio win the Coppa Italia.

I wouldn't of wanted to be the team who we played after the cup final as we absolutely smash Sampdoria with the big surprise being Cuenca who grabs 4 goals in the first half to double his tally for the season.

ScottT should add something to next season which is good.Getting very close at the top of the table now though
Login to Quote

ScottT
16 hours
Bit of a wobble lately but still firmly in the mix going into the deciding run of fixtures. Good luck.
Login to Quote

You are reading "Parma Calcio 1913 - An Italian Journey".