TheLFCFan
2 years
That Bayer needs to up his scoring record ey! Only seven goals, not good enough

ScottT
2 years
Palermo and Bayer are on fire. When Bayer is firing, Palermo can be very difficult to stop!
1
Login to Quote

Jack
2 years
There was me thinking it would be the manager to turn it around, it's actually Bayer

After a really successful September I was optimistic about the upcoming month. But it started off with a really difficult game against Lazio which resulted in a 3-0 loss, even with home advantage. We then faced Bologna, a side we should beat, and couldn't take away anything from the game losing 2-1, Srdjan with the only goal of the game. Luckily we had a break from league action and played Maribor at home in the EURO Cup II. We put in an amazing performance winning 9-0! Wonderkid, Sorensen scored a hat-trick, and both full-backs scored a brace. But as we returned to league action we suffered our second 3-0 defeat of the month, this time to AC Milan at the San Siro. Milan have really struggled over the past few seasons so this was a terrible result. In the next match against Genoa, Bayer decided to show up and scored a brace, his first goals of the month, carrying us to a 2-0 victory. We then faced further misery as we lost 2-1 away to Chievo. A really poor month, and we will be re assessing the tactics one again.

Bayer is the man. We need him to be on form if we want to win, he is the best striker in the league, therefore we must play to his strengths! He is the man who is helping me keep my job at Palermo!
Login to Quote

ScottT
2 years
A pretty dismal run. Not what you need at all...
1
Login to Quote

Zed
2 years
Still not really coming into form yet, hope you can put together a run without losses soon!
1
Login to Quote

TheLFCFan
2 years
Despite a 9-0 thumping thats a very tough month for the club. Need a big turnaround and to sustain some positive form soon.
1
Login to Quote

September did not go as planned in the league. We have really struggled this season when Bayer isn't playing well. November began with another EURO Cup II tie against Maribor, Sorensen and Markovic gave us a comfortable 2-0 win. Then we went on to lose two league games in a row, to Napoli and Parma. We played really well against Napoli and were unlucky to lose the game. Against Parma, we were terrible, 4-0 down early on, an embarrassing performance. Then back in Europe we won again, this time beating Besiktas 2-0. We have really played well in the EURO Cup II so far this season and top our group. We returned to Serie A action to lose 2-1 to SPAL, I couldn't take it any longer, and decided to change back to the 5-2-2-1. The change of tactic seemed to give us more solidity at the back, as we kept our first league clean sheet for 2 months, beating Entella 2-0. I wouldn't say it was a good month, but it was slightly better than the last. I am hoping moving forward we can improve defensively and focus on keeping possession better. At this stage of the save I started to concentrate on shorter passing and preventing the opposition from scoring by keeping hold of the ball.

ScottT - Not good at all, we need to improve fast!
Zed - Still waiting...
TheLFCFan - Still over half the season left to play, time for things to change
Login to Quote

ScottT
2 years
Its not been great lately at all to put it bluntly...

TheLFCFan
2 years
A couple months with out back to back wins is worrying, however, you can take a victory heading into next month and hopefully have some momentum pick up. A long way still to go.
1
Login to Quote

After a poor last couple of months I had to re evaluate our tactics and style of play. The last game in November I changed to 5-2-2-1 with a focus on keeping possession and it seemed to work well, so I decided to stick with that tactic for the entire month of December. Our first game was against Juventus. A real test! They are not the powerhouse they use to be since the rise of Inter Milan in this save, but they are still a very good team. With the tactical change in play we took the lead through Maric in the 30th minute. Our lead was doubled by the German Srdjan, and we managed to smash Juventus 2-0 at home. We maintained 67% possession and had more than double Juventus shots. A terrific win, a brilliant way to start the month, and with two wins in a row, things are looking promising. 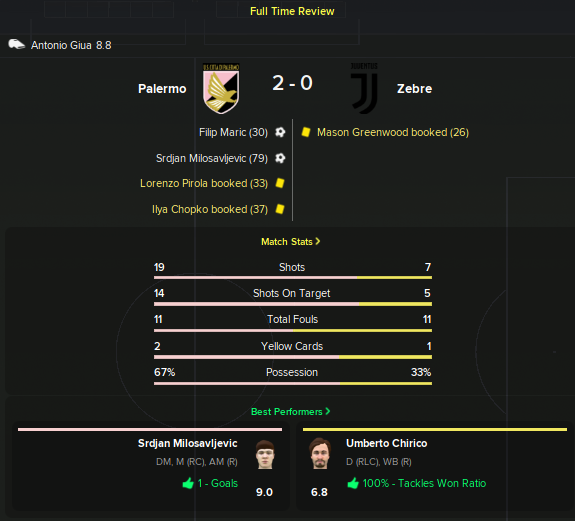 After beating Juventus we played another home game, this time in the EURO Cup II against CFR Cluj. We managed to win 2-1, two new players on the scoresheet; young dutch midfielder El Badaoui and our talented left back Chopko score, relishing his new wing back role. We managed to win our fourth game in a row beating Brescia narrowly 1-0. New signing Vaughan scored, a man we signed from Bournemouth who hasn't had a big impact, but scored an important goal for us late in the match. Then we played Cagliari in the cup, a rotated side lost 1-0 away from home in extra time. A tough loss to take but we played well. After losing to Cagliari it was back to winning ways, smashing Frosinone 5-0! Both our attacking wing-backs score a brace, and Bayer scored his first goal of the month. December finished off with another 1-0 victory over Fiorentina. El Badaoui scored his second goal of the month. A very impressive run for us, with the change of tactic we have looked like a new team and I am hoping we can continue this form for the rest of the season. Our full back's have been the stars this month, and El Badaoui playing as a second striker behind Bayer also impressed.

ScottT - I agree we were terrible the last two months, but not a bad December aye?
TheLFCFan - Only half way through the season, now hopefully we can carry our December form on for the rest of the season and pick up good momentum like you said!
Login to Quote

walkinshaw
2 years
A stonker of a month mate but just a shame about the Italian Cup, but surely turning around that league form is a good consolation.
1
Login to Quote

Zed
2 years
It's very on-and-off this season, but this month was mostly on, luckily! That win against Juventus looks really solid, especially considering the shots and possession. Maybe finally the start of a run of good form?
1
Login to Quote

ScottT
2 years
A great recovery! Isn't it amazing how quickly things can be transformed in football. Long may this be the start of a much better run for you.
1
Login to Quote