This is my first story, i start with my favourite club RSC Anderlecht in the 2006/07 DB, i made a file with all the players of Belgium. Hope you get interested! 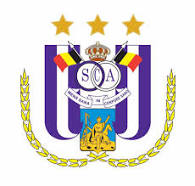 Eoin97
5 months
This should be very interesting to see. Good luck!
Login to Quote

Wolf
5 months • Edited
It's my first story ever so sorry if it's not that professional, I try to learn from others on this forum.
Alright, let's start! I first played the Super Cup against KV Mechelen but i didn't set-up all the players in the second division of Belgium so it wasn't really difficult, we won 6-0.

Kicking the season of with one of the biggest games of the year, we play against Club Brugge, our all-time rival. The biggest club of Brussels plays against the "biggest" club of Flanders. In Belgium we call this game "De Klassieker" 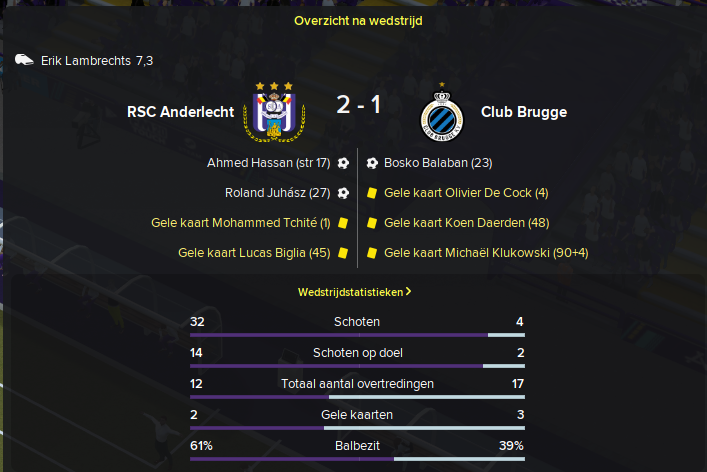 At the end a small win with so many chances. The stats says it all. I'll only tell a game in detail when it's a big game, small ones i will give a little info. After some more games i'll show the league table and results of other games, bit early in this season to do it now. We became champion the year earlier so we enter in the Champions League group stages.
Login to Quote

Also had a great win out at AA Gent. Nice goal from Jonathan Legaer who scored his second goal for Anderlecht and in his career.

Only made mistake to let him take the penalty, bit to euforic of me after his goal. Mohammed Hassan is my regular penalty taker.

Last game of this post was home against Lokeren, the club who went bankrupt earlier this week (Strength to the fans).

An impressive win against "De Tricolores", even when Jelle Van Damme got a early red card and again a missed penalty, people who know the club in real life would understand this. Also a beautiful dribble with a brilliant finish from Jonathan Legaer, who scored his second goal of the season. Boussoufa now 2 time MoM in a row!

If you have any tips how to improve this story, would be nice to hear.
Login to Quote

Eoin97
5 months
Complete dominance being shown by an Anderlecht of old!
Login to Quote 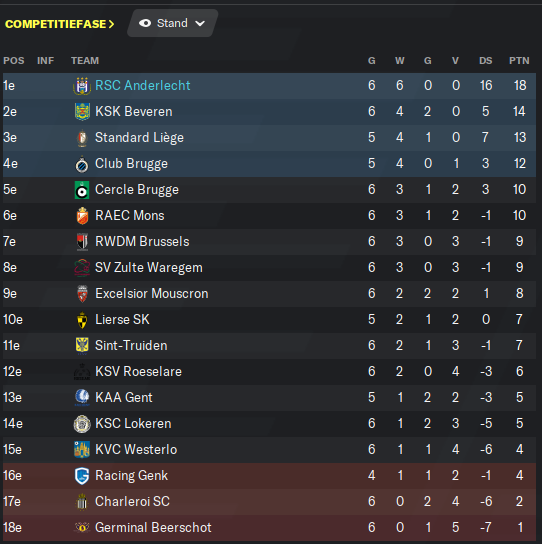 Interesting to see KSK Beveren at the second place while in real life they ended at the bottom. For people who don't know Beveren in these times.

It was even in a time when they had less Ivorian players, if you have the 2003/04 DB, search for them and look at their squad, you would be suprised what star players they had.

Made a very unlucky draw in the Champions League as you can see in the picture. 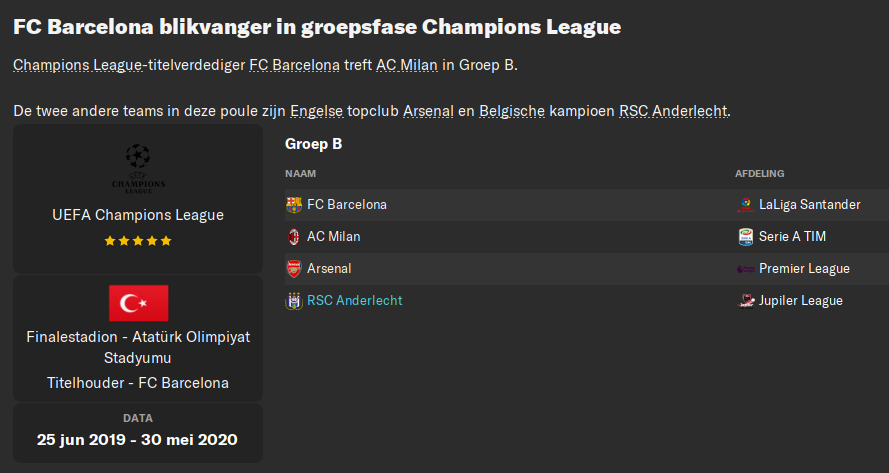 Will be happy if i get one point in this Group of Death.

I'll give a large report of these games, let us see what we can do in this unbeaten form.
Login to Quote

ScottT
5 months
Great start to the season. Mbark Boussoufa is off to an absolute flyer.
Login to Quote

Indeed, was my favourite player of that generation, also here's a post of how the season ended in real life in 2006/07, to give you an idea about difference in strength. 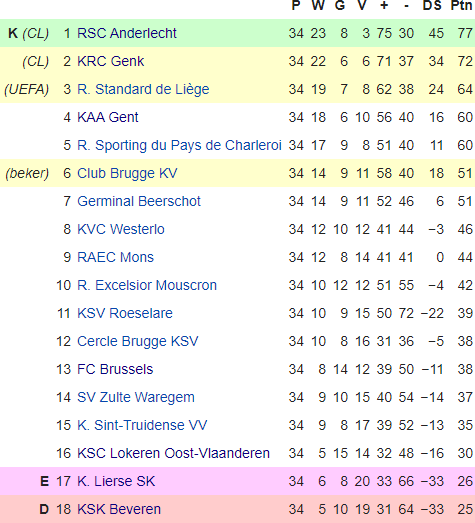 Reason why there is a big difference between the positions for Beveren is that they went bankrupt shortly after this season, the 2006/07 was one with a lot of quarrels, players who didn't get paid, didn't show up for training, etc.
As for talent they still had a club that belonged in left side of the table.

I'll show the league tables of England, France, Germany, Spain and Italy when they played 15+- games.

First Champions League game of my career! I wonder if we can get something done against AC Milan. Here's their line-up, missing Cafu, Serginho and Jankulovski since they are injured. 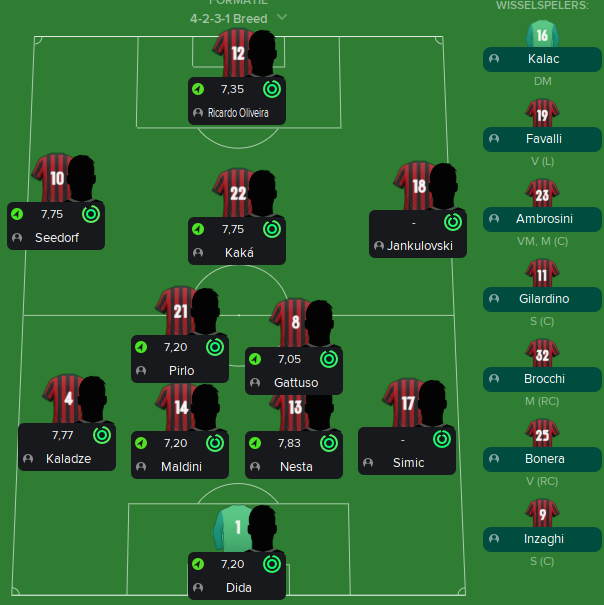 Wolf
5 months • Edited
I took 1 hour for this report but when i tried to post it went gone, very frustrating. Now i'll make a short one 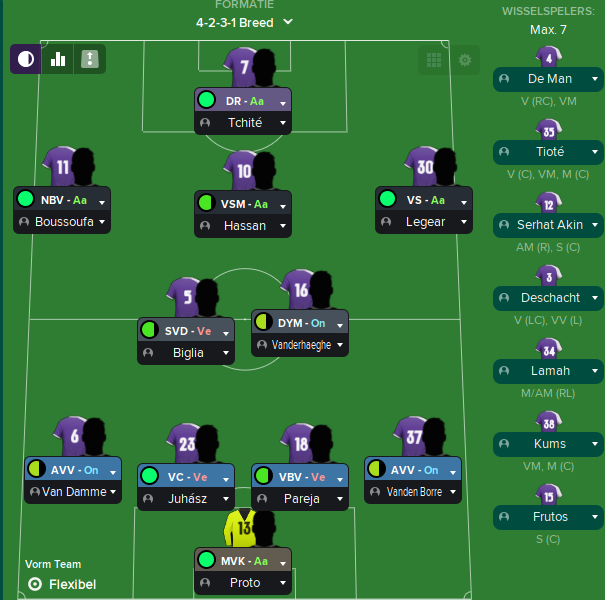 I started the game very good with quick 1-0 lead thanks to a nice header of Yves Vanderhaege. Very exciting game to watch, with AC Milan having slightly more chances. At the end i made the 2-0 after a beautiful counter.

Wolf
4 months • Edited
Due to work on the 1999/00 project, i'll take a hold on this for save for some weeks. Starting back mid-june/end june.

If you want the files of Belgium just ask me, i'll just give them to you
Login to Quote