2020-06-26 14:25#274902 TheLFCFan : Progression in Europe is great to have with a game to spare and despite that hammering from Liverpool you are still in the top four which is nothing to be disappointed in. Nice job!


Liverpool either hammer me or I get a narrow win don't seem to be anything in between.
Login to Quote

I'm giving the 2nd team a chance here considering in 3 days we play Man Utd and it will be the best chance we have to pick up some much needed points. 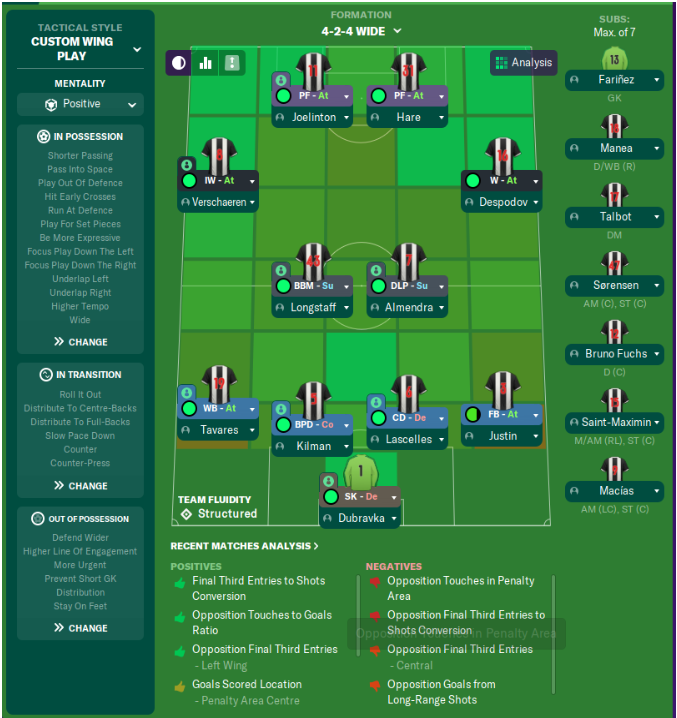 1st team back for this one. A win today will put us back into 2nd place. 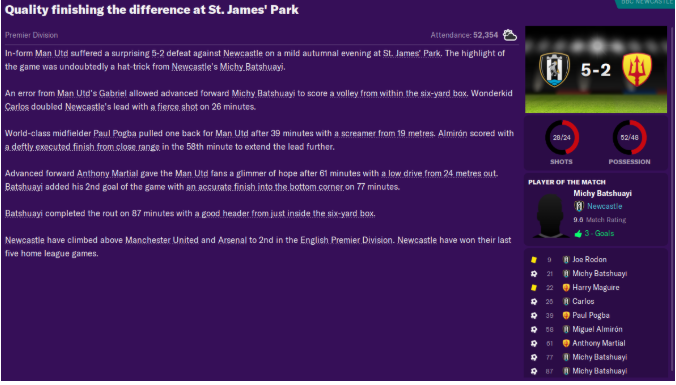 The 2nd team start this one, it's going to take us losing, Hearts winning and an 11 goal swing for us to be in 2nd place. 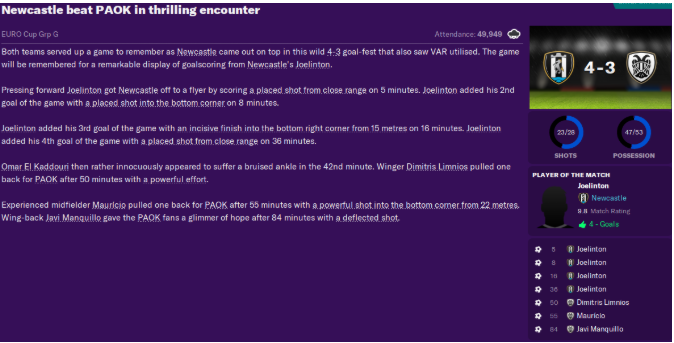 Switching to the 1st team again most likely will be the first team for the rest of the month with minor changes when needed. 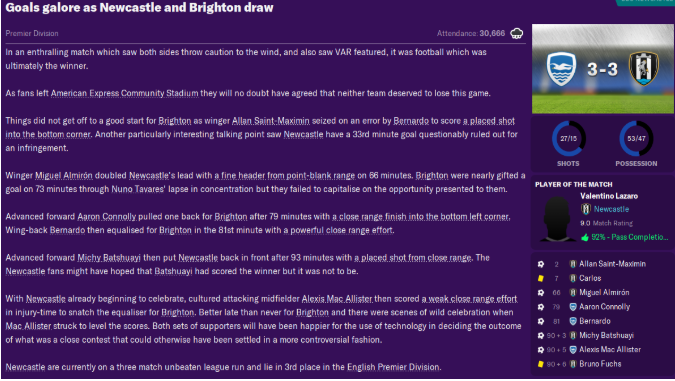 Shane Longstaff starts instead of Almendra as he has a tight calf but will return to training tomorrow. Almiron will also miss out due to a pulled hamstring which will see him out for at least 1 week. Verchaeren will replace him. 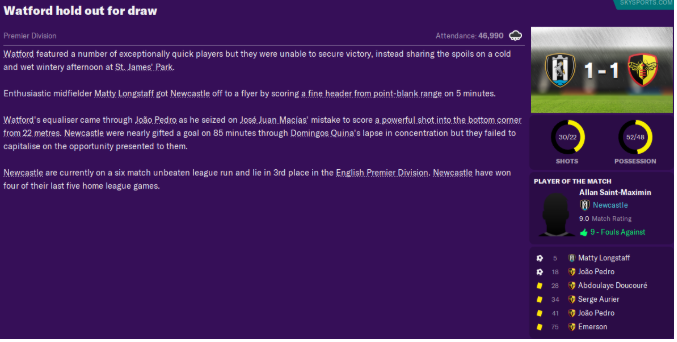 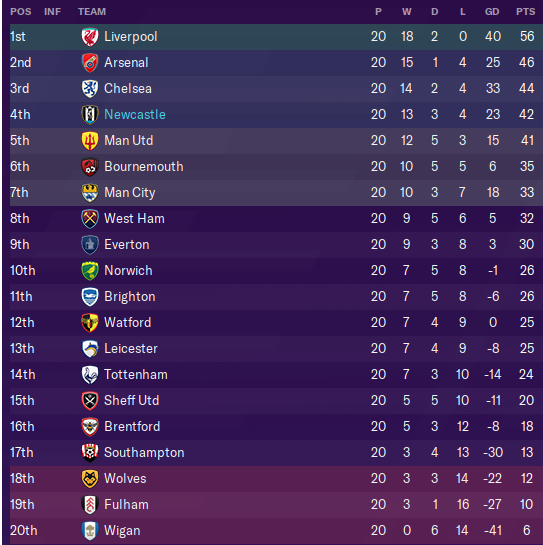 20 games in and we are 4th. We should be aiming for a champions league place this season. Man Utd are going to be the biggest threat for that so far this season. We managed to get 12 points from a possible 18. 1 point behind my initial target.

I'm going to be optimistic and say 12 out of 15 points this month. Man City is a team I still expect to be getting beat by.
Login to Quote

Brentford (A) FA Cup 3rd Round

We need to win the FA cup either this year or next year so i'm going to have to pick the best lineup every time from now on. 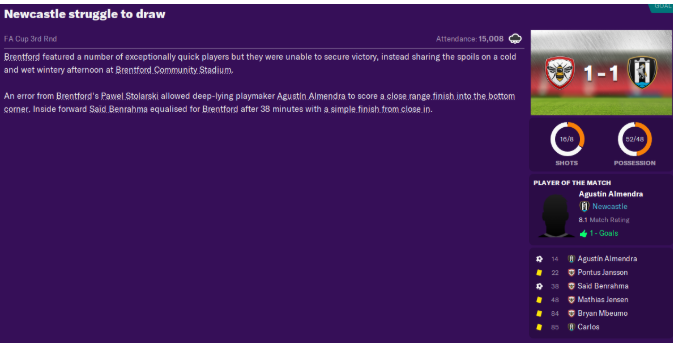 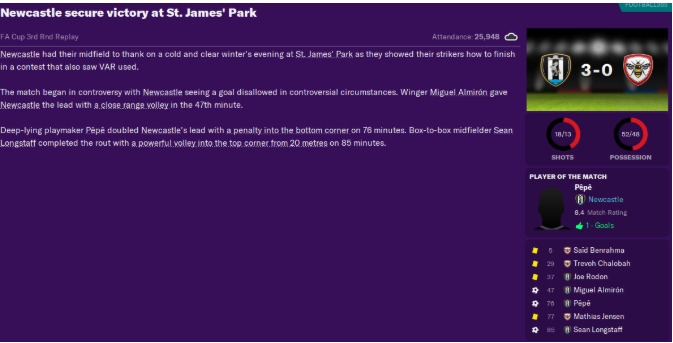 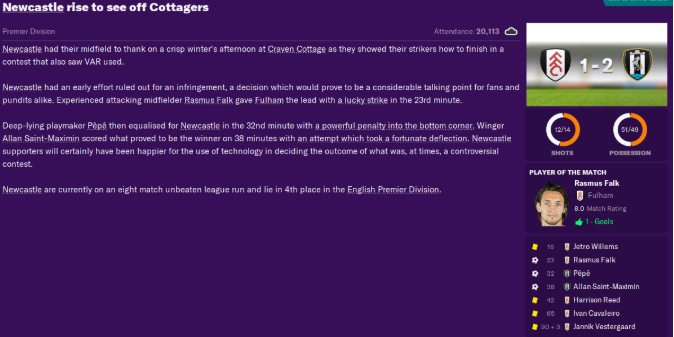 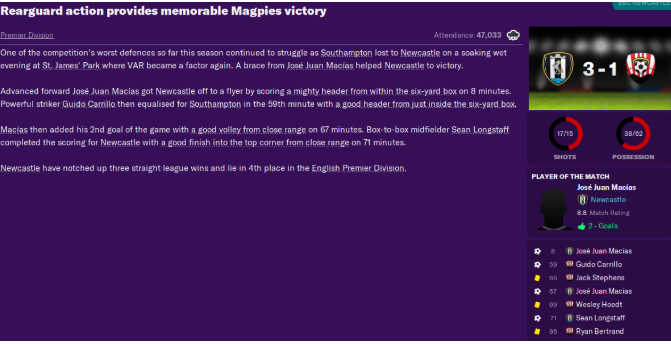 13 games left of the season and we are 6 points clear of 5th place Man Utd. Wigan & Fulham are pretty much relegated as they are behind Wolves by 15 and 11 points. Wigan have not won a game all season.

We managed to get maximum points last month 15. I only predicted that we would get 12 points.

Only 3 games this month and it's the first time that I am predicting maximum points. 9 points predicted.
Login to Quote

TheLFCFan
2 years
Excellent month! That win against City is exceptional and the Champions League spots are almost confirmed at this stage.
1
Login to Quote

Yes so happy me managed to get it level before the break.

ScottT
2 years
Asserting yourselves into the top four quite nicely this season. You definitely look on course to achieve your target of qualifying for Champions League football next season.
1
Login to Quote

2020-06-28 01:57#275045 ScottT : Asserting yourselves into the top four quite nicely this season. You definitely look on course to achieve your target of qualifying for Champions League football next season.

I hope so, hopefully we can keep going for that final 13 games.
Login to Quote 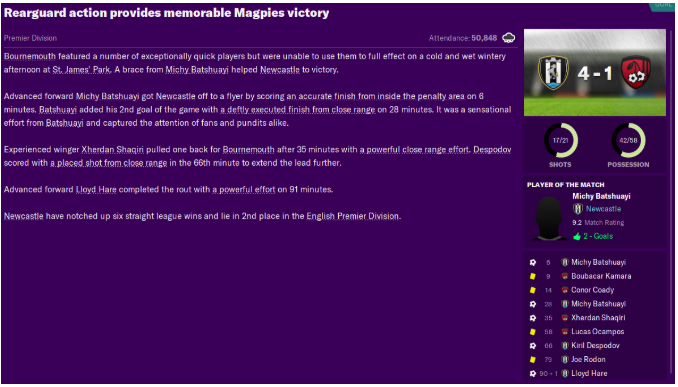 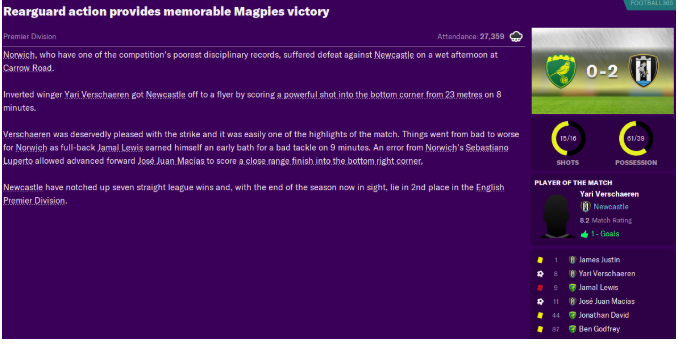 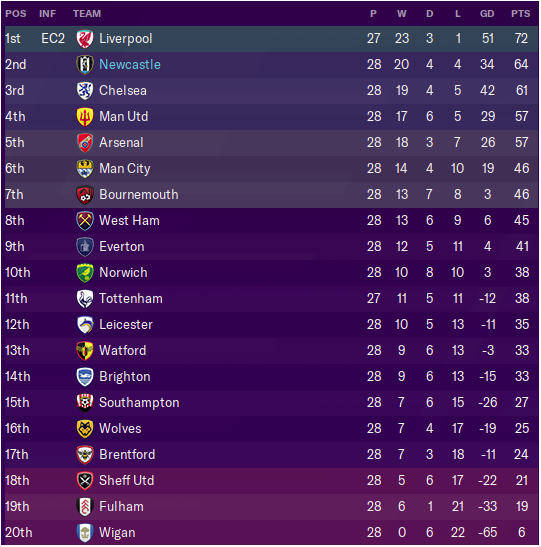 10 games to go and we are 7 points clear of Arsenal in 5th place. Champions League qualification is still a possibility this season. We are also 8 points behind Liverpool, I cannot see us getting anywhere near catching up to them this season.

I predicted that we would get maximum points but we only managed to get 7.

Only 3 Premier League games this month, Man Utd is the only game I'm not predicting to win. I predict 7 points from 9 this month. It's also worth pointing out that we need to win the FA Cup at the very latest next season to achieve the first target of the challenge.

Lyon is a tough team and I'm not expecting the team to get past them in the Europa League.
Login to Quote

ScottT
2 years
Seven points from nine isn't the worst. You're in a position where the occasional slip isn't too costly but it's important to ensure it doesn't become a regular habit.
Login to Quote

TheLFCFan
2 years
Bournemouth gives you a good shot at qualification into the Quarter-Finals which could be a real push towards winning the tournament a year earlier. The league is still going very nicely and Champions League football looks very likely now.
Login to Quote


Bournemouth (A) FA Cup 5th Round 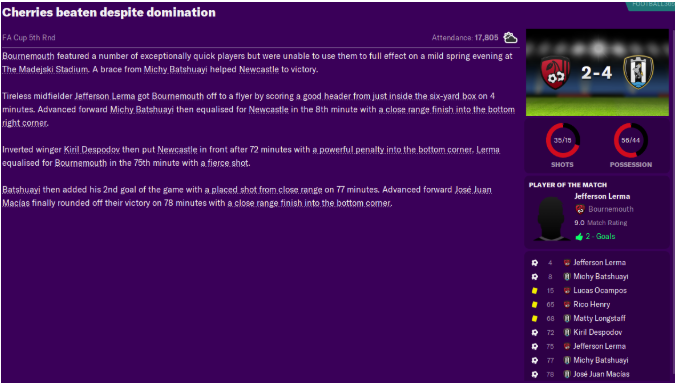 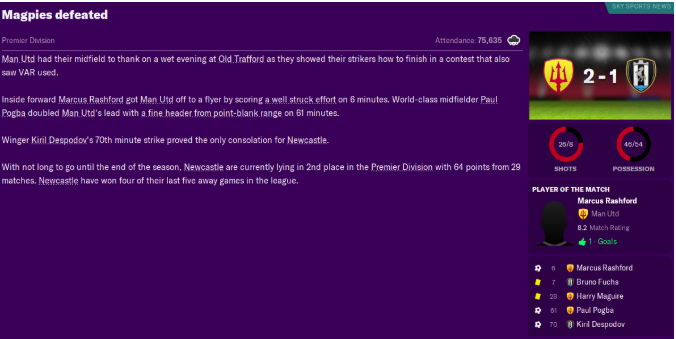 From having a 2 goal lead to ending the game with a draw is bitterly disappointing. I really thought if we could get past Lyon then we would have the potential to go all the way in the competition. With the elimination from the Europa League, we can now concentrate on improving our league form as we have not won a game now in 4 games.

A win against Chelsea will relive a lot of pressure in winning a domestic cup in the first 4 years of my tenure at Newcastle FC. We would be in the semi-finals against either Sheffield United, Liverpool or Manchester United. Avoiding a draw with Liverpool could land us in the finals with a year before we are desperate to win. 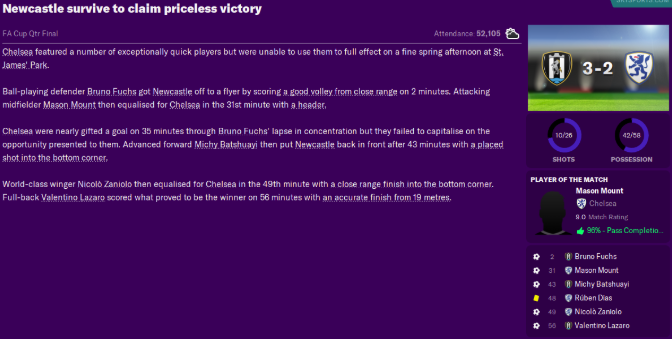 We only just scraped by Chelsea to make it into the semi-finals.

A few days later we had a very lucky draw in the semi-finals. Yes, it's Sheffield United. My only hope is that Man Utd beat Liverpool in the other fixture as I really cannot see us beating them at all.

Very much slim pickings again the only candidate that has real potential in the first team is Bob Newton. Ugochukwu Igwe has an outside chance in making the 1st team however he will need to drastically improve. 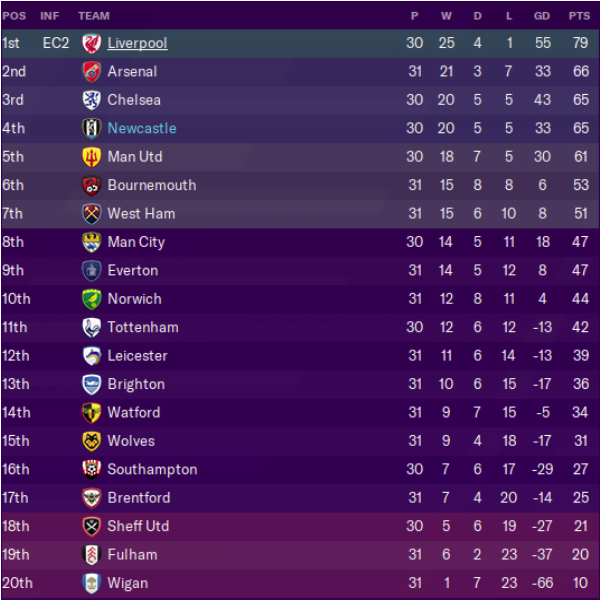 Only 7-8 games to go this season Wigan is pretty much relegated with Fulham & Sheffield United trailing behind Brentford by 4 / 5 points. Liverpool is 13 points clear at the top of Premier League and will take a disastrous end of the season to not win them the title. I think at this point in the season we must be looking to get Champions League football next season.

With the fixture changes this month we only ended up playing 2 premier league games 1 which I predicted a loss and the other I predicted a win, however, we only managed to draw the match giving us a total of 1 point out of a possible 6. The end of season form really needs to improve.

A pretty hectic schedule this month 6 league matches and the FA Cup semi-finals.

Liverpool, Chelsea and Arsenal games are the only ones this month I am expecting to lose. With that said I am still predicting 9 points out of a possible 18. If we can get a draw against either Arsenal or Chelsea that will help tremendously for Champions League qualification.
Login to Quote

ScottT
2 years
An important month lies ahead. You were unfortunate in the Europa League against Lyon. You gave a very decent side with plenty of pedigree a good run for their money.

Top four has to be on the agenda this season considering how consistent you have been at retaining a place inside the Champions League spots this season. It would be a shame to surrender at this stage.
Login to Quote

2020-07-10 11:11#275967 ScottT : An important month lies ahead. You were unfortunate in the Europa League against Lyon. You gave a very decent side with plenty of pedigree a good run for their money.

Top four has to be on the agenda this season considering how consistent you have been at retaining a place inside the Champions League spots this season. It would be a shame to surrender at this stage.

Champions League is realistic this season still got a long way to go to catch up to Liverpool tho, Look set to win there 3rd title in a row
Login to Quote

You are reading "The Sir Alex Ferguson Challenge FM20".