OneMoreGame
2 years
Mixed feelings after the first season. Avoiding relegation, but mission out the international competition to your rival and didn't managed beating them.

So another question about the league, now there are 2 champions each year (spring champion and autumn champion), when 20 teams will be in the league is this going to continue?
Login to Quote

Jack
2 years
At least avoiding relegation gives you some breathing space, a shame about the loss to Huracán though. The gap between next season now gives you time for perhaps a few adjustments in the playing squad to how you want it to be.
Login to Quote

Justice
2 years
Time to regroup and refocus. Plenty of time to get the team in the shape you want it to be to combat the league next time.
Login to Quote

TheLFCFan
2 years
A platform has been built now, staying up and finding a more settled tactic that seems to be working. Now you have time to plan and attack this new season.
Login to Quote


If we really aim to achieve at least part of what our rivals have achieved in their lifetime, we have to evolve. Evading relegation every single year with eventual participations in continental football is not something that such a traditional club with passionate fans deserves. As we have evident limitations resources-wise, Argentina is a country full of talented players that could make a difference. There is no excuses to relax our way into mediocrity and mid table positions. Let's go for it.


In the dying moments of the last season, I noticed that many clubs had players about to leave for free that were yet to be enrolled in pre-contracts. Maybe they were expecting for their contracts to be over before talking to another clubs, but closer to the end they were open to talks. And we profited from it. A lot.

As I have already presented Tomás López and Fernando Torrent during summer break, I'll now present the others:

We managed to find some cash through selling some squad and promising players. None of these players were part of my long-term plans, and I think we got particularly lucky with the values involved in the sales of Eric Ramírez and Tomás Cataldi.


We had six friendly matches for the pre-season, mostly against lower tiered teams in the Argentine football, with exceptions of the Brazilian Série A side Athletico Paranaense. As we won all six games, we can say the preparations were decent.

The Superliga is about to start, to be played in a single-turn system for the last time in history. This season's Superliga will be decided after 22 games; the next will have 42 rounds. If we are consistent enough, we can find a spot in the Copa Sudamericana or maybe Copa Libertadores and stay there for time enough. The odds suggest that we won't achieve any of it, but I'm positive this team can offer better than a 15th position. 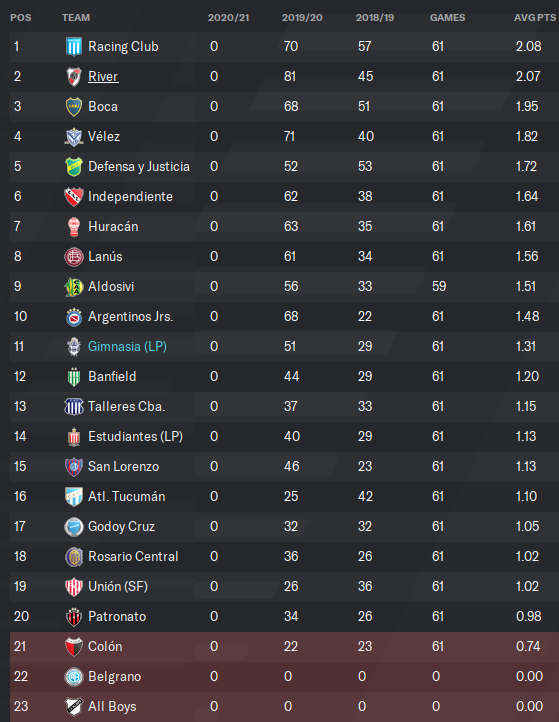 Last year's success allowed us to have a far much more comfortable position in the Promedio table. This season promises a thrilling 11-team battle against relegation. 2021/22 season's Second Division will have 32 teams fighting for 2 spots in the elite, so they better avoid this tight funnel. More than that, we are not among these 11 teams, but I can promise you that we are not settling for security. For the upcoming seasons, we want to be back in the world again, playing against the top flight clubs in South America.


@Oz96 yup, Agudelo's goal pumped me, Mussis' red card sent me back to the ground

@OneMoreGame the bitterest part is not being capable of beating them not once, definitely

answering your question: the system of two champions per season hasn't being around for a while. It was adopted during 1967-85 as a division between Metropolitan and National (but lots of teams played both) and returned during the 1991-2014 period, as Apertura (Opening) and Clausura (Closing) to be dropped for good in 2014's transition tournament. Before the COVID-19 outbreak, the Superliga was set to follow the regular European calendar starting from the 2021/22 season. Now I don't know what they are going to do.

@Jack this part is the most important. When I arrived, we had a lot of recently signed high-salary low-deliver players, and some pricey loans for positions we were already fine. So I could make a lot of space in the budget for this season and build my squad free from all this foolishness

@TheLFCFan yes. Now it's time to stop looking over our shoulders and start looking ahead

@deadzpool the Superliga Argentina has a lot of interesting and curious teams indeed. It's a joy playing with that many traditional sides, and to see that much of silverware changing hands. Our goal now is to be a part of this

Justice
2 years
Plenty of money coming into the club from those sales, and some good signings made. The next league season will be a big one and hopefully you can achieve one of the top spots!
Login to Quote

ScottT
2 years
Some decent additions to the squad. I think with the pressure off a little in comparison to last season, we could see a better performance this season.
Login to Quote

Griffo
2 years
Geez this is going to be an interesting season, best of luck
Login to Quote

Zed
2 years
Some nice fees received for those players - especially given that you weren't planning on using them anyway. Excited for this season, will be interesting!
Login to Quote

Jack
2 years
I wonder if the spending less, increasing revenue method will work. Certainly some great deals in the sales department but I hope the reluctance to spend it won't come back to bite you!
Login to Quote

OneMoreGame
2 years
I'm still amazed at the leagues structure. 32 teams fighting for 2 spots, are you kidding me? Some nice player you've got for free.
Login to Quote

06: Not even the most optimistic


If we want to show everyone that we can keep growing, the time is now. As the recent fiascos from Gimnasia took the club away from the chance to be in any kind of continental football, and Boca knocked us out of the cup, we had 100% focus in the league.

Fortunately, we have a chairman that shares our feeling that the team need to keep growing, so we were granted a youth facilities upgrade to be finished by the end of 2021. This first semester was WAY BETTER than I could expect! The team played marvelous football, careful with the ball possession and efficient with the chances created. I honestly expected a much rougher start, having to face River, Racing, San Lorenzo, and Lanús within the first five games, but the lads responded amazingly well.

We started off with the shock of the year, not only beating, but controlling the game against River in the Monumental de Núñez. We were immediately brought back to reality as Racing beat us at home, even though we didn’t play bad. During the expectedly rough start of the season, we got also beaten by San Lorenzo, being that our lasf defeat of the year.

After that, we engaged on a fantastic streak of 12 games without a defeat, including the disappointing tie against Independiente after opening a 2-goal advantage, a crushing victory over Banfield away from home, and finally, the so-long awaited, the promised but never-coming, Clásico win. As we waited for a whole season for this moment, it came from the feet of Bruno Vides, who got himself two and was the man of the evening. 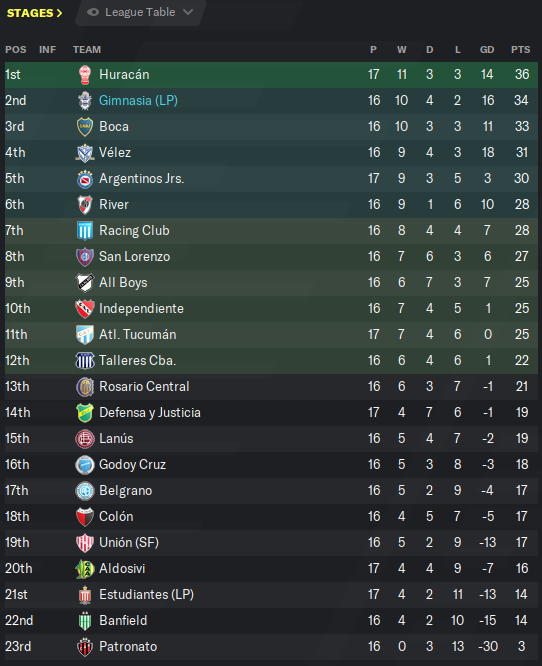 We are not only 2nd, but we are virtually in the lead! Even though we are 2 points down Huracán, we have one more game left than they have, as the league has an odd number of teams. As Argentines love to count things by points-per-game, we have 2.125 pts per game, and Huracán have 2.117.

Speaking of which, the Promedio does not scare us anymore. We are still 11th at the Promedio table, but the gap to the last 3 spots only grows. But wait! With an average of 1.06 points per game, our rivals Estudiantes are really close to danger! Could you imagine, grabbing our first professional silverware in the same year our rivals get relegated? That would be the best year ever for Gimnasia!

In the individual realm, kudos to Bruno Vides, the league top scorer aside River's Lucas Pratto and Argentinos' Tomás Andrade, with 10 goals each, and to Juan Pablo Carrizo, who made it to the Team of the Year.

Six games left, we can do it!


@Justice WHAT ABOUT THE TOP?

@ScottT well, we got a performance that speaks for itself

@Griffo yes, it was!

@Zed yeah, but maybe as a curse I cannot sell anyone right now hahaha

@Jack well, it's not like I stood a chance, the board confiscated the money

@OneMoreGame as last second division had 36, it's actually and improvement hahaha
Login to Quote

ScottT
2 years
What a start and a victory against Estudiantes! Fingers crossed you can maintain this unlikely form. It would be a welcome surprise!
Login to Quote