ScottT
1 year
Laughable at how easy this is becoming.
Login to Quote

Jack
1 year
I would go as far to say that this team is probably Championship Play-Off material, simply exceptional.
Login to Quote

Tango
1 year
couldn't even make it to 120 points, so disappointing
Login to Quote

Zed
1 year
Agree with Jack, that away win against Charlton and the insane league form indicates that you'll probably blast through League One as well, even with no signings!
Login to Quote

What a way to finish off the season but with 4 wins in the league. The final game of the season the board decided to throw a fan day and we had a bumper crowd in our final games against Morecambe and we gave the fans exactly what they wanted with a great 3-0 win. We also had the Checkatrade Trophy final against Arsenal U23's to look forward to and I'm glad to say they couldn't handle us as we were the much better team. We did fall behind to a Saliba header in the 9th minute before Hamilton got us back on level pegging and then Reeves put us ahead on the strike of half time. Guebbels then put the game to bed with 9 minutes remaining to make sure we won the double this season.

In the FA cup final Arsenal really showed they were the better team with beating us 2-0 with goals from Lacazette and Almiron but Gunn saved us from getting really hammered as he manged to only concede 2 goals when they had 11 shots on target. 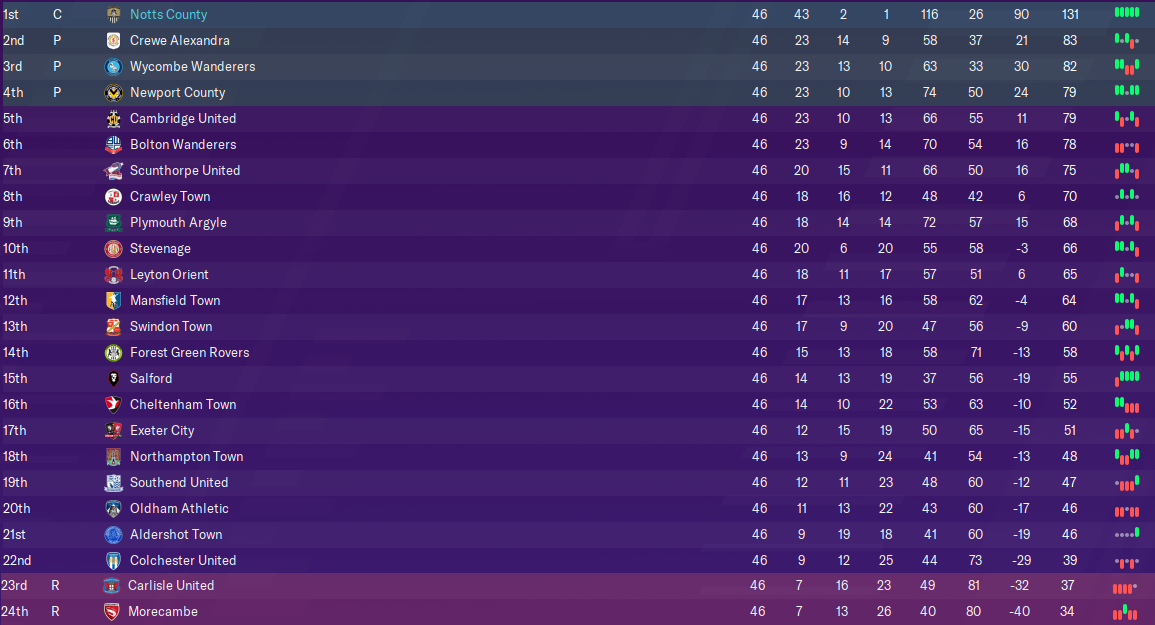 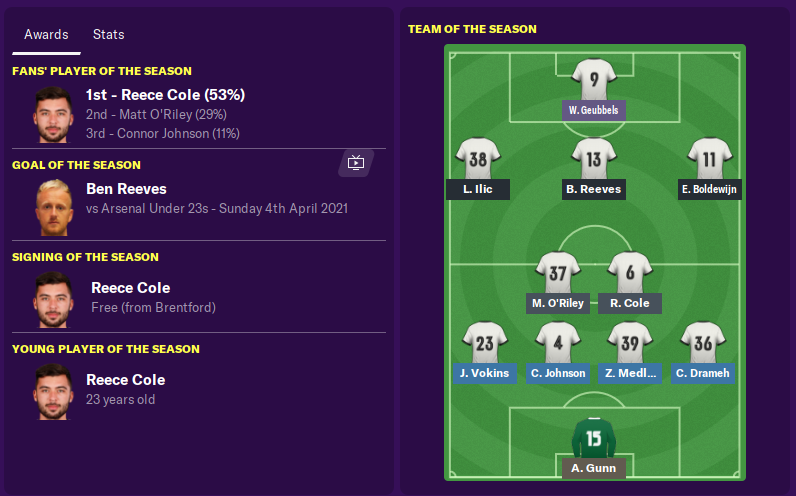 Cole nearly gets a clean sweep with only losing out on Goal of the Season to Reeves. Cole has been instrumental for us this season pulling the strings from midfield and will still be there next season to do the same. 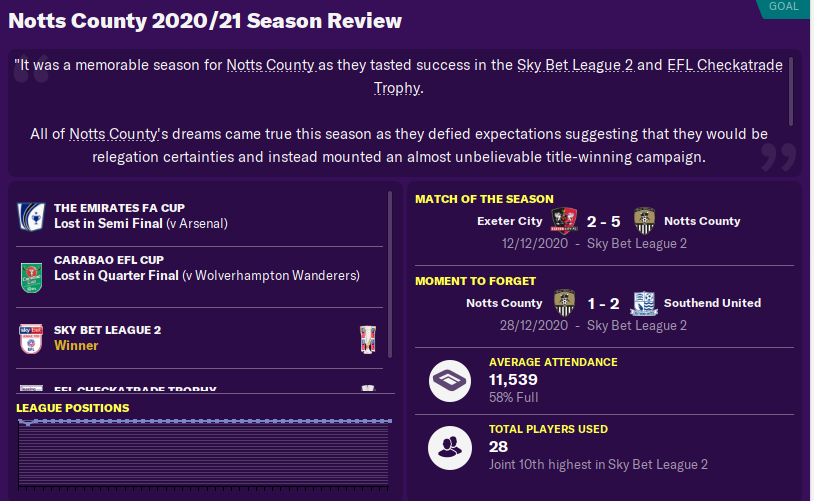 TheLFCFan Not to sure how I've managed to bring them in but I do love a big signing. Fingers crossed we can walk League 1 as well before things get interesting in the Championship.
ScottT Next season might be a bit trickier but lets wait and see
Jack we'll see if they can step up to League 1 yet.
Tango Thats because we made it to 131
Zed Fingers crossed but I'm sure there will be another few signings coming in
Login to Quote

ScottT
1 year
A good effort against Arsenal but even you can only take a team so far. Give it a few years and you'll be coasting to a thumping win against them.
Login to Quote

We ship out a few players who were either going to be second fidle if not worse off so it made sens to cash in to free up wages and give us a bit more bang for our buck in the transfer window. 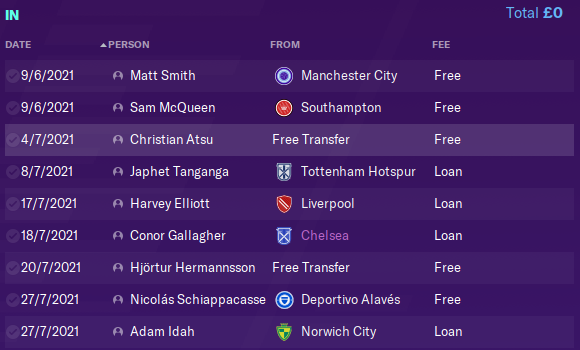 We hit the free transfers again this season and we sign 4 great players that will add so much to our first team with some good experience. First in was former Manchester City player Matt Smith who has been out on loan the last 3 seasons getting experience and earning a number of caps for Wales in the process. Next in is Lb Sam Mcqueen from Southampton who hasn't featured much over the last few seasons but has still played in the Premier League and that experience is vital. Next is former Newcastle winger Christian Atsu who again brings a lot of experience to the team and should make the LW his own. Next was Hjortus Hermannsson who as an Icelandic international will again bring experience into the back 4 and help solidify the back. Finally we bring in Nicolas Schiappacasse who as transfer listed with a price of 0 after playing 27 games for recently relegated Deportivo Alaves and he will be a great addition over the next few seasons.

We also bring in some loan players to give us a bit more depth along with adding more first team players who can step up and make a difference as we try and throw together another cup run or two.

We have a good preseason as the only blip is a draw against Brentford but we get a very big win against Nottingham Forest and this is a good sign as we will be facing them twice more this season as they have been relegated to League 1 so that will give us our first chance in the big derby.

We are expected to reach the play-off this season and in all honesty with the squad we have here I would take that as a disappointing season as I expect us to go up again at the first time of asking.

ScottT
1 year
Some great additions that are far too good for League One.
Login to Quote

TheLFCFan
1 year
I expect this league to be a breeze once again with those signings. Good luck, although I doubt you need it.
Login to Quote

We promised the club one final big season to allow us to compete this season at the top and to build a strong team for the Championship. We feel that we have delivered on that promise with welcoming Jack Wilshere to the club. Breaking onto the scene through the Arsenal youth ranks before being let go at the end of the 2017/18 season. After that he moved to West Ham where he has only made 15 appearances over three seasons.

While at Arsenal he made 34 appearances for England and even though those days are now behind him he is still a massive signing for Notts County. His development was hampered by a number of injuries through his career but I feel we can still get plenty out of him here and his experience will be great for the some of the younger players as well. 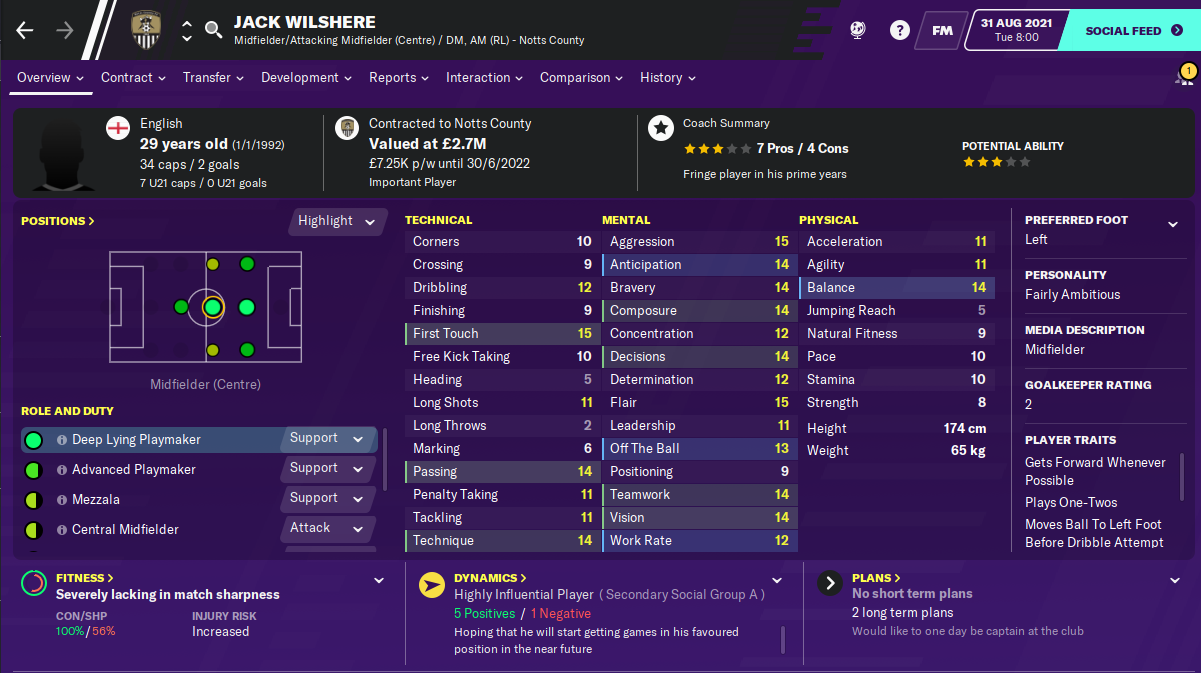 ScottT Hopefully we'll continue to get some players of this quality every season from the free transfer market.
TheLFCFan Cheers, I agree and would be surprised if we struggle this season
Login to Quote

ScottT
1 year
A great signing if he stays fit!
Login to Quote

Shanewhite66
1 year
Your flying through the leagues , could you send your formation and tactics , would like to try it with my non league club
Login to Quote

TheLFCFan
1 year
Wilshire also in this team! As long as he stays fit he could be a star of the side, and that is saying something with the names in this team!
Login to Quote

tazz21
1 year
well done on a good job so far, best of luck on the new season
i've a question for you: what formation are you using?
Login to Quote