H e n d y
1 year
FM20, Season 1 and yes, I really tried to sign him and immediately I could see it was not going to be easy.. Barca would not let him leave for less the £100M (which is his release clause amount).

I have 2 saves on my FM career:
A. The first save is 100% just Man United and it’s all about building, winning, re-building and going again, season after season.
B. The second save is 3.5 years at United and then a National Team Manager career which has seen me win the European Championship with Holland and then win the UEFA Nations League and FIFA World Cup with England.

I am beginning season 8 and I can’t believe how under-rated and unappreciated LOUIS is.

As soon as I was England Manager he was called-up to the national team. Still only 20 or 21 years old when I called him up, Louie Barry was playing at Barca B level….. which is criminal.

I remember when I sent James Daniel on loan to Real San Sebastian for season 3 (2021\22) and LOUIS was there with him at the same time.
It was an impressive team which scored goals and when LOUIS has good quality around him, the boy plays well and scores goals.…basically scores a goal every 2nd game (Played 11, goals 5)

Also his stats for England is nearly a goal every game (played 14, goals 12) and he has some tough competition which is the only reason he has not played more games. However, the biggest shock was his transfer for nothing (£3.8M) to Valladolid which makes no sense and he has a min. fee release clause that is only £14.25M which most championship clubs could probably afford to pay.

Yet with all these positives and really good things he has proven, cheap price tag etc.. he has not been brought back to England or paid what I believe he is worth.
If I was a club manager in the game, then I would buy him ASAP.

The only reason I can think as to why he has not been picked-up is because of his 1 con. Lack of team ethic.
From my experience, LOUIS will play for you if you show him love. All strikers need love and the striker is a strange beast who often needs more love than other players in the team.

The only issue I had with him was found within his Mental stats.
Teamwork: 8
Vision: 9
Concentration: 10

I always prefer more vision and concentration from my strikers. Concentration is key for being in the moment and taking your chances.

The flair and anticipation always make him a constant threat so it’s hard to make a final decision about him.

The key factors for me were:
1. At Man United I had a low teamwork player called Jadon Sancho who is a world class player and great for the team so for strikers, or attackers, I can let the teamwork stat be low.
2. When given chances he took them and with such a high determination stat (15) I knew that LOUIS would keep fighting for me in the good times and the bad.

If you are playing FM20 and need some goals or working with a limit budget and need a bargain, then I recommend the forgotten young man Louie Barry. He has proven himself to me and I am sure he can for you as well.
Login to Quote

Mercia
1 year
Looked at the kid a while ago, out of my league currently financially but very interesting story. 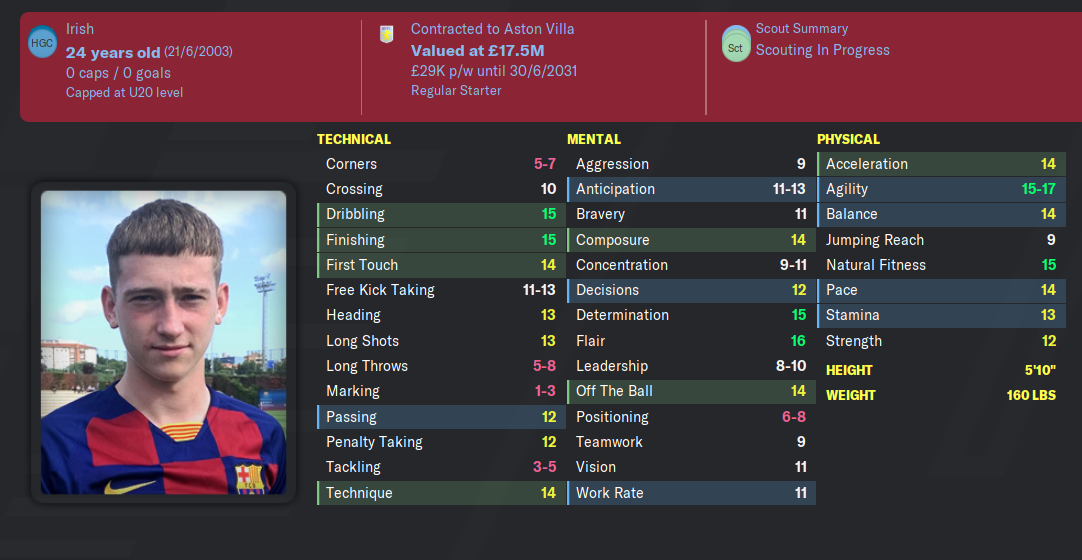 In my save a little different though given the stats you'd expect more even if Villa have been a yoyo club and just got relegated again.

This kid would murder with my setup LOL oh well.
1
Login to Quote

Zero caps for Ireland is unbelievable. How he is not playing international football for them, i don't know or understand.

Its a shame he is out of your league financially because i would love to see how he would perform for you.

Thanks for the comparison and fingers crossed you get bought by a consortium who then pump lots of money into the club and allow you to buy our mate LOUIS.
Login to Quote

hahahhha...such a terrible screen shot but at least this one loaded.
The missing stats:
1st touch : 15
Freekicks : 11
Heading : 12
Login to Quote

Mercia
1 year
Will definitely be keeping an eye on this kid in real life to see how he gets on.

It's funny cos he has the stats to really kick on and do well but doesn't seem to, his scoring record at Villa isn't particularly great through all those years.

Just had a consortium takeover though it hasn't given me enough for him haha, oh well, I've never expected much at York financially.
Login to Quote

Mercia
1 year
Villa put him on at 0-0 at Villa Park with 10 minutes to go and the little shit had to go and score didn't he.
Login to Quote

LOUIS must have know we had been talking about him and looking into his stats!!...hahahha
Login to Quote

You are reading "Louie Barry (nicknamed: LOUIS).. the forgotten and under-rated English player in Spain, who can score goals!!".