H e n d y
1 year
Like I have said before, normally I am a Westham Manager and I try to take my team to new places in league and cup competitions. The question of ‘Can you make United great again?’ was so big I had to try and answer it.

At Man United it is obligatory to have a DoF and so I had to think of a position and person that was completely new for me.
I decided to use them with 1 goal in mind …… Can you help me get the best?

I want the best deal, the best players, the best talent and because its Man United I also want the best that money can buy.
I absolutely hate paying too much for a player. It kills me inside.

Because of the situation at Man United when I took over on day 1 of my career, I wanted experience and respect for the person who was going to be my DoF. After a few searches I found THE GODFATHER (Ariedo Braida).

I wanted a DoF who could recommend players and negotiate transfer fees plus contracts. However, when selling players, I wanted them to use their network as well.
Ariedo Braida did everything I asked and wow he did everything well. He was a massive bonus to have on our scouting team.

As you can see from his profile photo, he has great stats and he spoke 3 languages which was great. This man did so much good for me and the club. I was very un-happy when he retired from the game after only 1.5 seasons.

Some of his hall-of-fame moments:
a. Recommended I sign Ricardo Rodriguez from AC Milan. He is probably the best left-back on the game. Can defend and attack and scores goals, gets assists.
b. Found clubs \ offers for both Luke Shaw and Sanchez. At the time both were a real problem for me and he got me some great deals.
c. Highlighted Dani Olmo and Marcelo Brozovic who both went on to play very well for United. Both have since been sold for a lovely profit.

When he retired, I was lost and needed time to think about what direction I wanted to take the club and who will be his replacement.
I thought about the future and I wanted someone to excite players so they would want to join United. I found a semi-hip, young and fresh DoF from Benfica to attract talent…….Rui Costa!

Rui Costa, we all loved him as a player. Rui was part of THAT generation for Portugal. Himself and Figo we would all watch for hours.
From March 2021 Rui Costa was my DoF and as you can see below, his stats are ok but not like the Godfathers.

Rui signed on 14th March 2021 for only £13k per week and his current deal ends on 30th June 2025. He was working as a DoF for Benfica and I thought he previous presence/standing in the game as a player could really help make United exciting.

We were winning things and building with each transfer window so I thought it would be another positive step to have Rui with us.
In some ways it has worked well, but it has cost me and United. Rui is a very poor negotiator compared to his predecessor, Ariedo Braida. Stats are 13 versus 17.

Cost went up and contracts were poorly constructed. For example Jude Bellingham’s contract. The playing time that was promised was fine but the pay promises that went with it were not acceptable.

……..It is so bad that I am thinking to terminate his contract and instead find a younger version of Ariedo Braida.
Based on what I can find so far, there is one very interesting possibility. Stuart Webber.

I have learnt that negotiation and adaptability are 2 key stats which must be combined with a professional or driven character.
My only concerns with Mr Webber are that he does not have so much European or World knowledge but because of Brexit in my game, that is not exactly a bad thing. Also, his language skills are limited but nearly all agents speak English so that should not be such a big issue.

…….I have changed DoF’s twice and as I begin Season 5, I will offer the job to Stuart Webber and see what he thinks. Fingers Crossed.
Login to Quote

Mercia
1 year
Yeah have to say, I hired a Director of Football as padding for the story in my head of my big, loud, american manager and got this guy 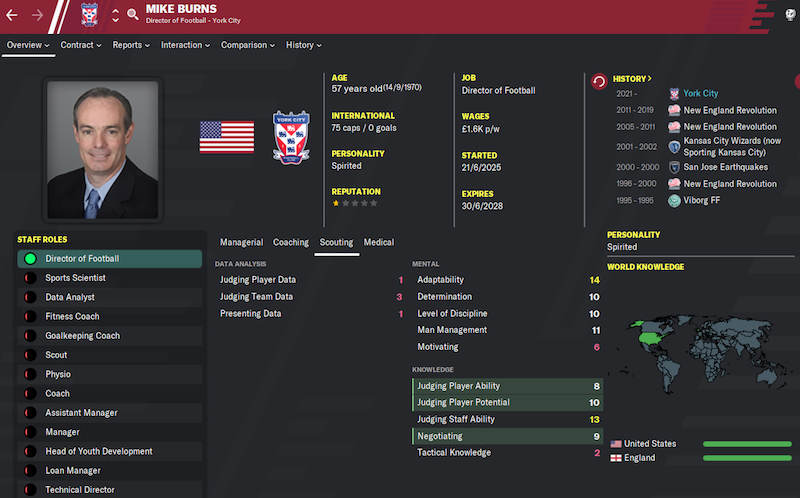 Even his stats aren't particularly good but from an RPG perspective, spot on for me.

Part of the americanisation of York City!

But I have to say, every window he spots out some interesting players in North America worth looking at, has done contracts for me when the player was being an arse, and recently highlighted this very interesting prospect 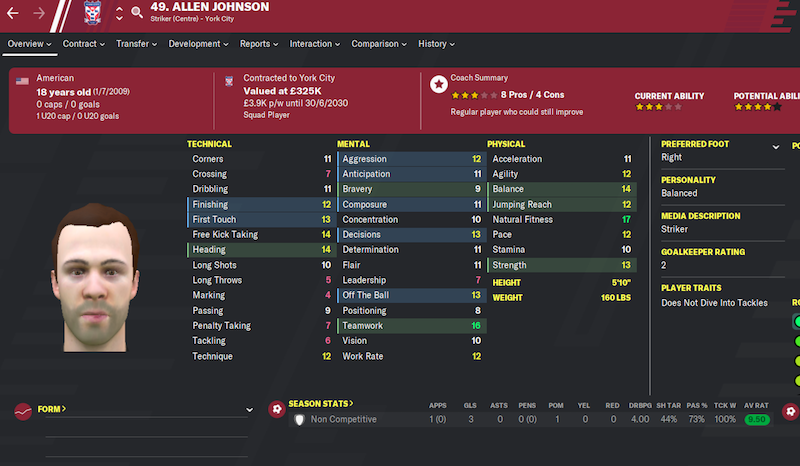 I think all in all even if we don't use the DoF to their full potential, it's worth having one around, just for some new looks, out of leftfield players, and doing some of the grunt work we can't be bothered to deal with
1
Login to Quote

I could not imagine life without one now.

The contract renewals and boring stuff you can delegate to them so they most definetly serve a purpose which helps lighten the load for managers.

Sounds like York is becoming a louder voice in the North, keep pushing mate.
Login to Quote

You are reading "Director's of Football and how I under-estimated them.".