This is a story in which I will attempt to recreate Spain/Barcelona's style of Tiki-Taka football for Chelsea as I attempt to build their young team towards Premier League domination. As an early disclaimer I will be making use of pr0's editor data, as well as using the editor to cancel existing loans at the club in order to achieve the following goals but I hope this doesn't take away from the integrity of the save. I will be beginning the 19/20 season as an alternative choice to the appointment of Frank Lampard. I am currently a bit into the season.

GOALS:
1.DOMINATE: I grew sick of the match engine's tactical inconsistency and sought to dominate possession and passing the ball extremely often and accurately. My aims this season beyond any success in competitions is to build a footballing tactic philosophy that promise entertaining possession football at Stamford Bridge. In spite of Chelsea's immense success, they have failed to establish a prevailing dominance and I want to build those foundations. I will later detail many aspects of the tried and tested tactics I plan to implement but for now I will link resources that helped me develop this mode of tiki-taka.
https://www.passion4fm.com/football-manager-barcelona-tiki-taka-tactics-emulating-pep-guardiolas-positional-play/
https://dictatethegame.com/2019/12/06/recreating-total-football-in-fm20/

2.GET RID OF DEADWOOD/TOTAL FOOTBALL SQUAD
I wanted to rid the squad of its shackles that fail to align with my footballing philosophy. To do this, I did recall my players from loan and one look at my transfer history will indicate why. Rather than an immediate demand for funds, the main impetus of this move was to immediately build a foundational structure for my ethos that differs from Lampard's current plan and squad, which has already seen some success.

3.BUILD A LEGACY
What we all want to do in Football Manager; build a legacy! I want to make moves and win trophies how I want to and build a squad that reflects this. I plan to win the Premier League twice and Champions League within 3 seasons. This will take significant investment alongside a great trust in the club's youth players and system, aiming to emulate the success spawning from Barcelona's 'La Masia' setup which saw the genesis of footballing greats performing in the model of tiki-taka.


This is just the first post of many to follow, I hope this has inspired you to keep an eye out for this as I will now look to introduce the manager and system employed to begin this revolution!
Login to Quote

ENTER JOHANNES CATALÁN. A lazy and easily decipherable spin that projects my intention to imprint this squad with possession and flair. The Spaniard's abilities skew towards high levels of discipline and man management, as well as attacking/technical style. Catalán will attempt to build the team around team leaders Azpilicueta and N'golo Kanté, while making heavy use of the technical abilities of Hakim Ziyech, Jorginho and Kovacic. The other places remain up for the taking and will be determined based on how the players fulfill roles within the tactic. The formation will be a 4-1-4-1 (DM) or what I look at as a 4-3-3. Kanté will sit deep as a half-back who will function as a connecting playmaker. (While his passing range is limited, his defensive attributes are too strong not to include.) Jorginho and Kovacic will make up a duo of midfield playmakers with Werner leading the line as a pressing forward, pushing the defensive line back and aiming to link up with inverted wingers.

Yikes.
Necessary work done on 2 tactics that were far from effective in the games. The players aren't exactly proficient in the elements of the tactic and there is still work to be done. 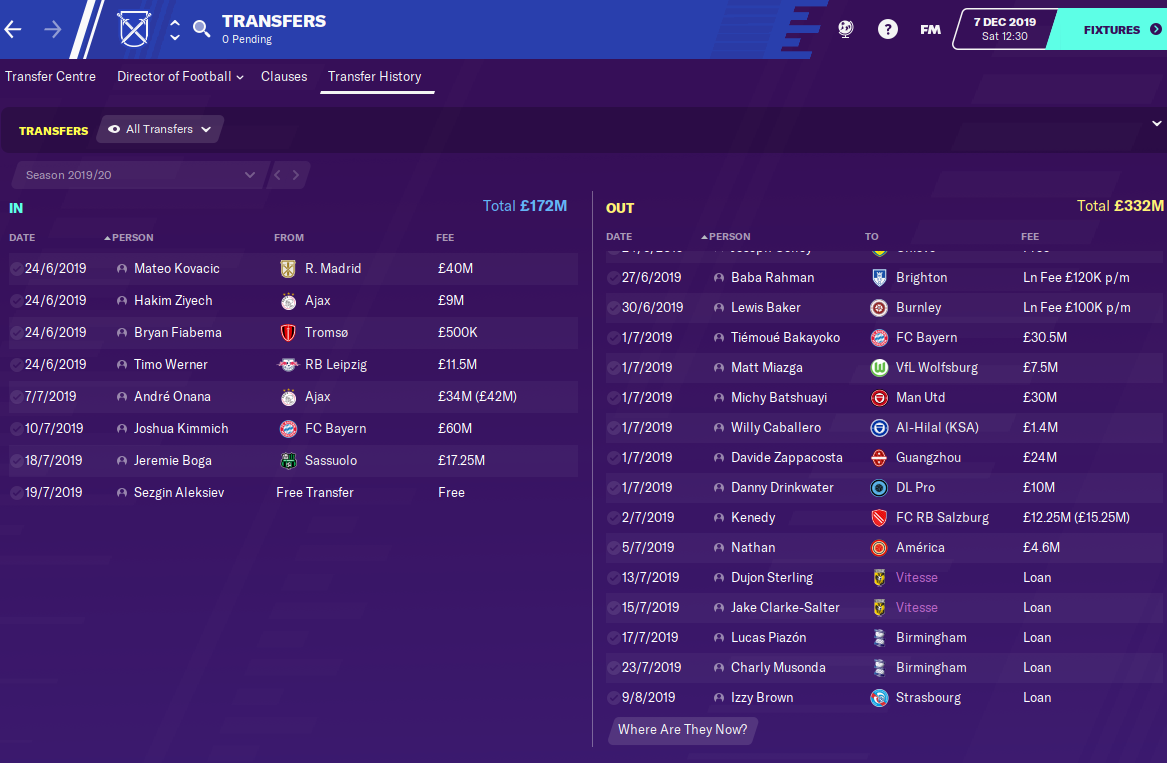 FIRST GAME OF THE SEASON 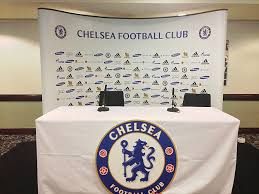 Johannes Catalán, accompanied by his English translator, take their seats as the press gathers to ask questions around the home game to Sheffield United.
Lukas Darby from Sky Sports News asks, "What do you attempt to accomplish in this first game as Chelsea manager?" The manager assertively relays the message back to his translator, who says "We want to dominate the game. To win in style. We are looking for more than 3 points.We want to put our extensive team and individual training together on the pitch tomorrow."
Stephan Wolstone from Off the Ball asks, "Do you consider yourself part of the leading pack for the title."
A dismissive shake of the head comes from Catalán, his translator reaffirms that with such a strong league, the ideas that he seeks to implement will take a long time for the players to break down and that this is merely a time for building, but building strongly. 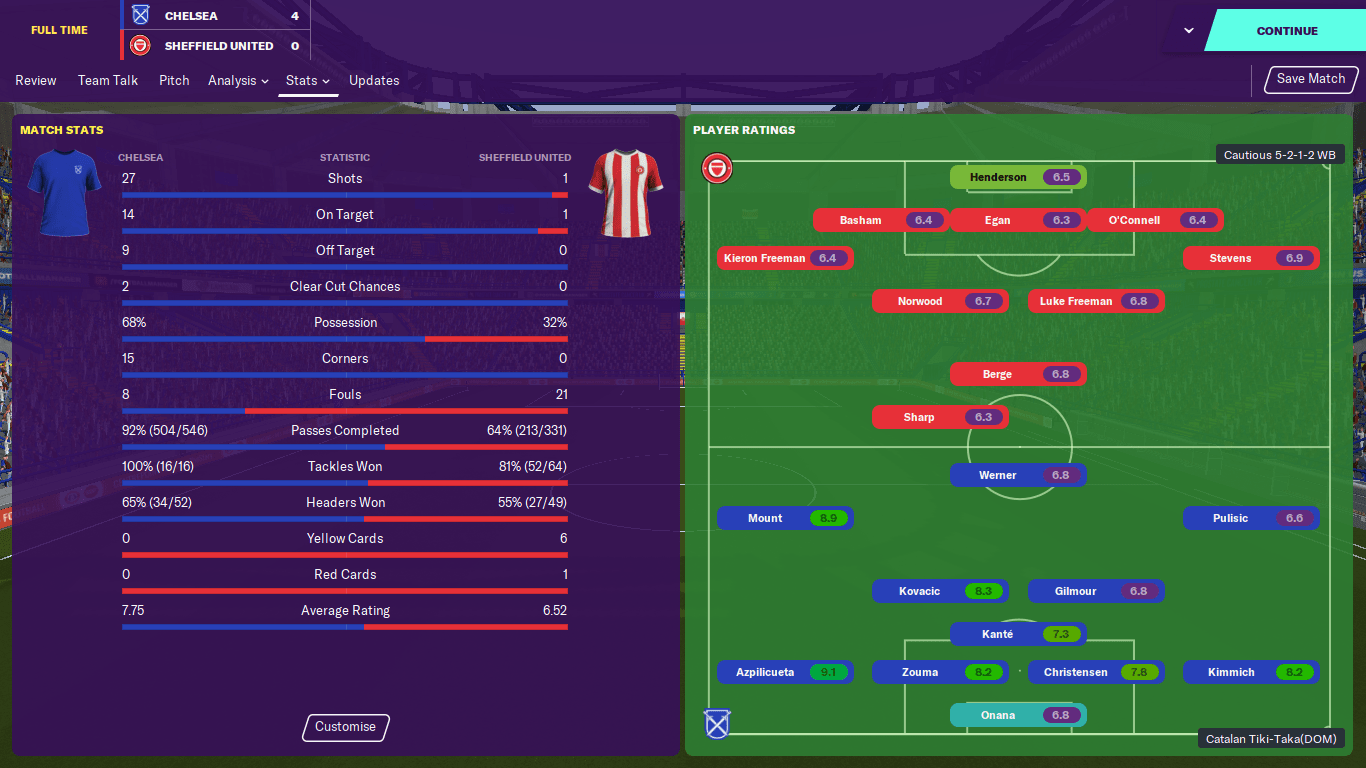 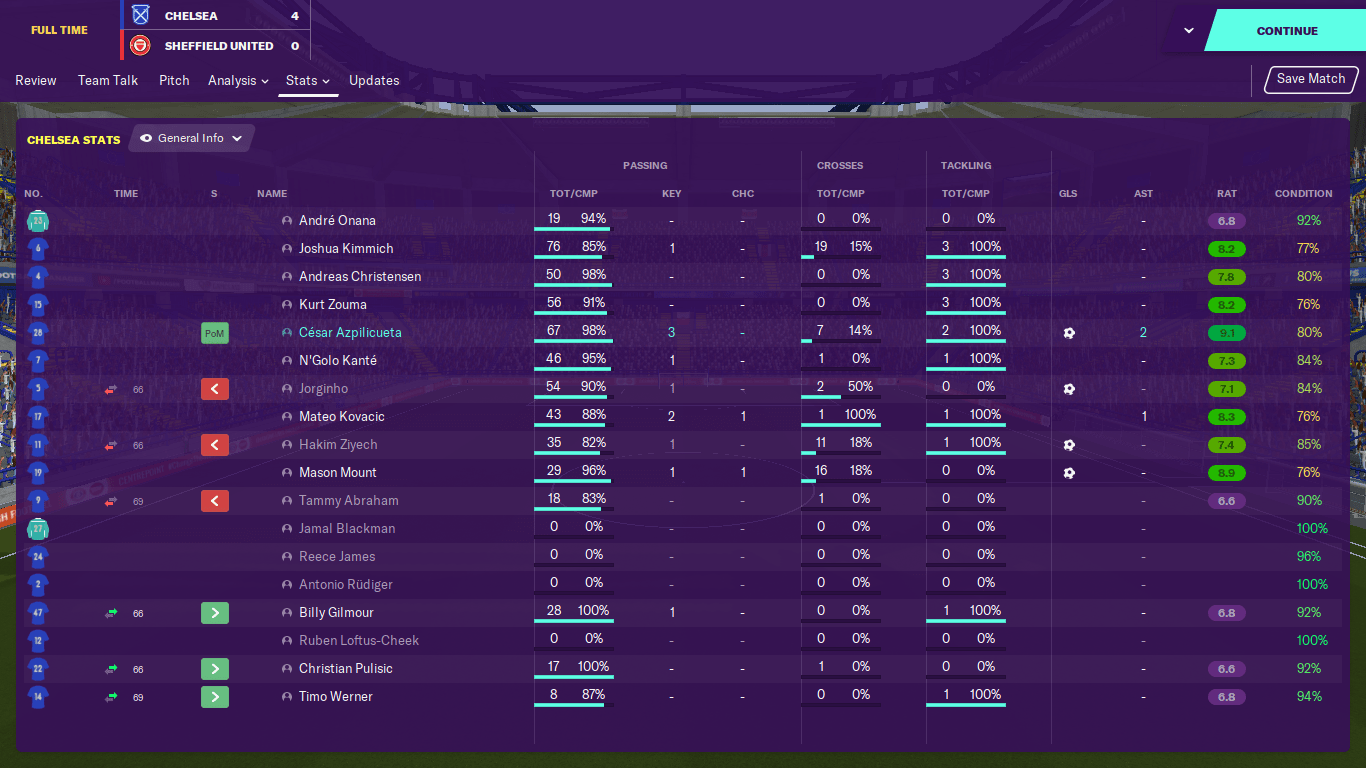 As the whistle blows, Johannes Catalán passionately takes to the pitch, intensely applauding his players individually. His establishment of high quality possession and maximum effort have been realised to some extent. Goals from Azpi, Jorginho, Ziyech and Mount delight the manager which vindicates the domination of the ball.
Login to Quote 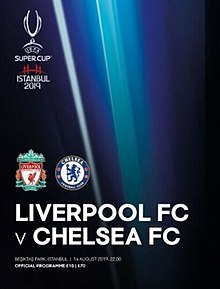 Catalán's next game sees his young and not yet cohesive side travel to Istanbul for the UEFA Super Cup against Champions League champions Liverpool. Klopp's men dominated Europe last season and this will make for a tough test. Can Catalán's men assert themselves on the best team in Europe? An entirely different challenge to Sheffield United, that's for sure. 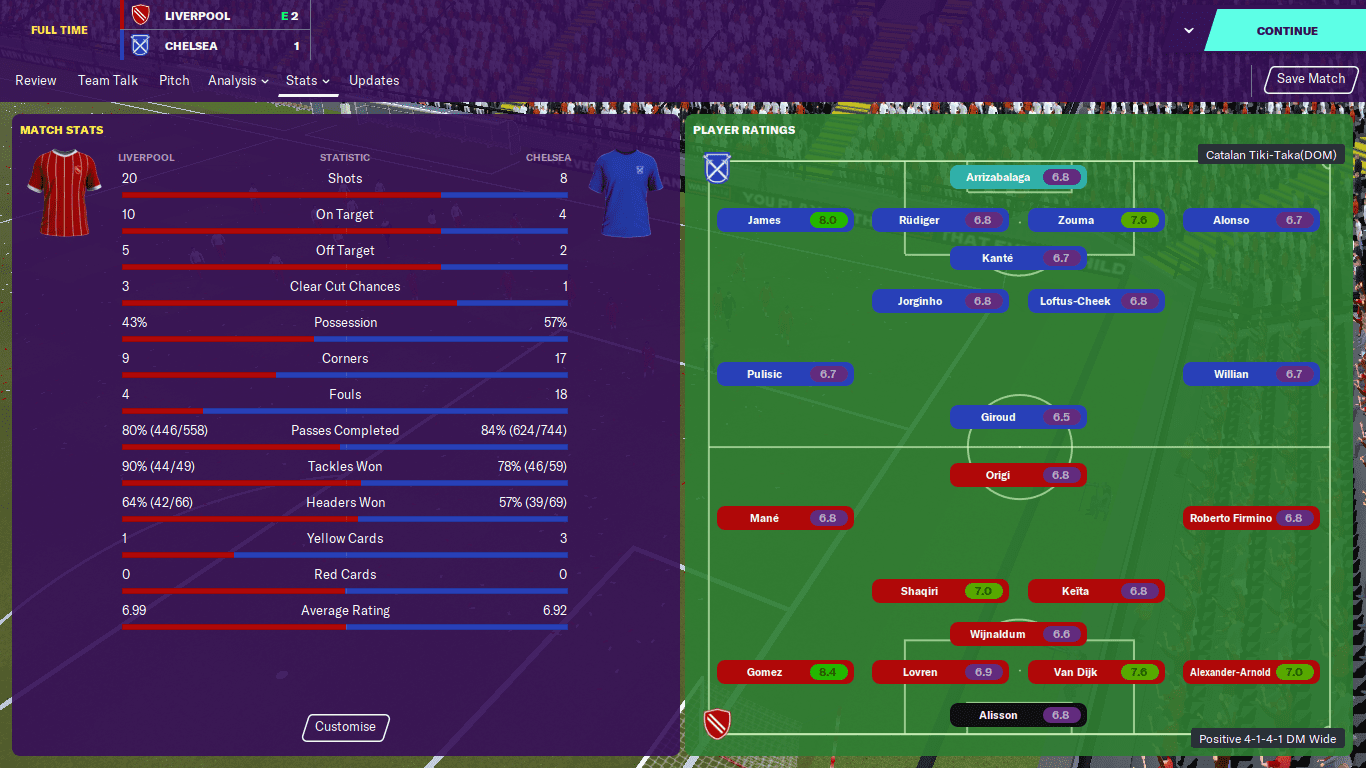 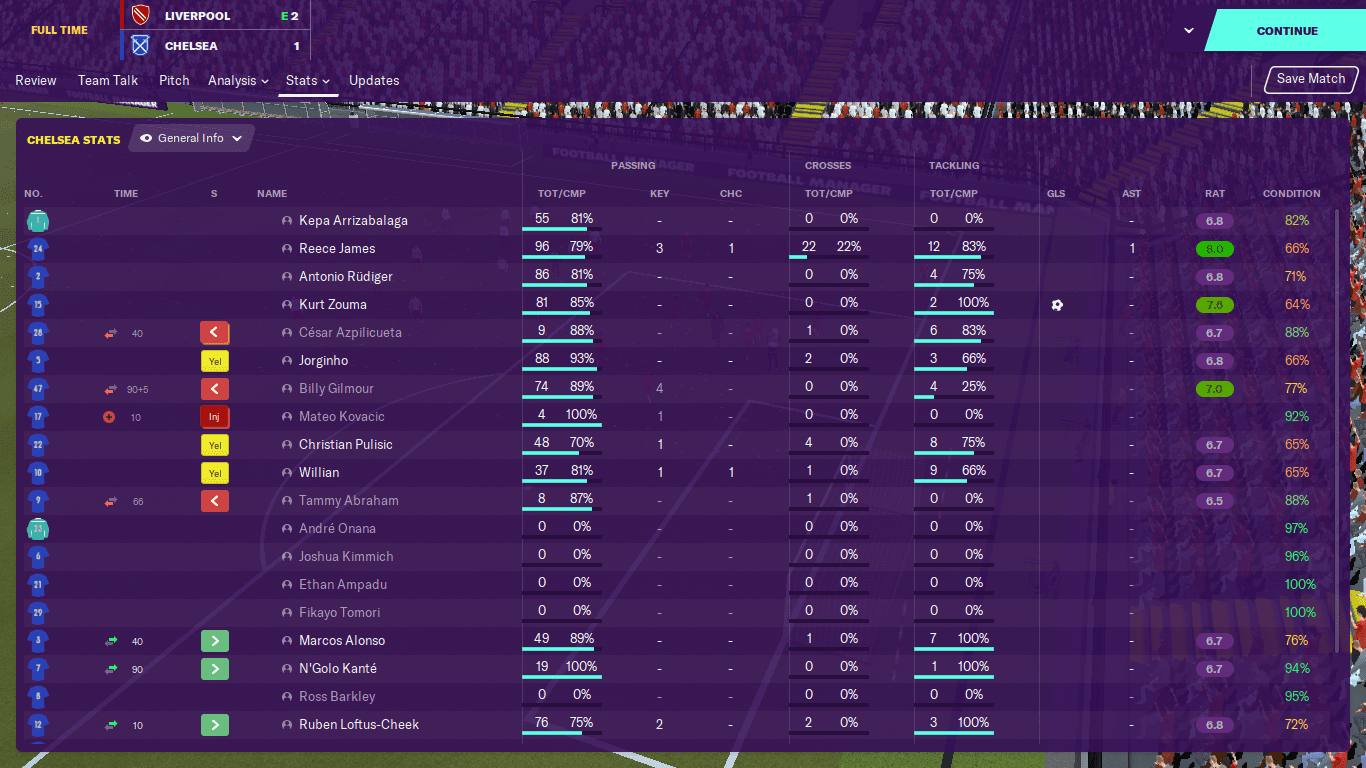 A disappointing collapse that saw us dominate chances early on. Switching to a more cautious approach saw Liverpool press on and deservedly take the game from us. Encouraging possession statistics, but much to be worked on from the defensive and chance creating elements of the game.

Catalán approaches the lads with sympathy, he asserts that they were unlucky and blames himself in the media scrum for the change in tactical approach. He promises that his ideals won't be compromised for fear (or indeed any other motivation) and his lads are called in the following evening for a review of the match footage. 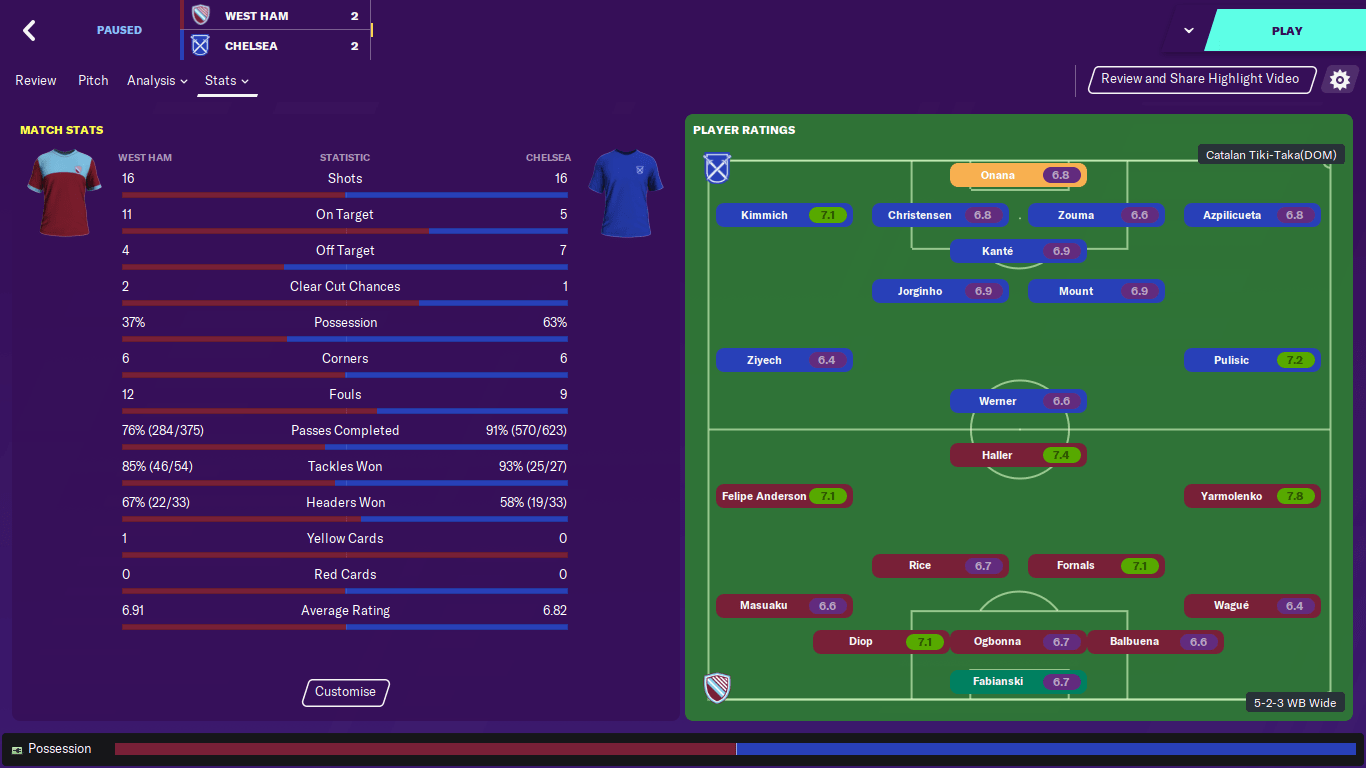 Johannes Catalán swings and slams a water bottle against the ground in frustration after a capitulating draw in London. Shaking his head, he rues the defensive performance which saw his side concede too many counter attacking chances to West Ham. He lets a nervous looking team know about their failures and demands further tactical work that focuses on retaining possession EFFECTIVELY

PREMIER LEAGUE GAME DAY 3
Back at the Bridge; Werner on form 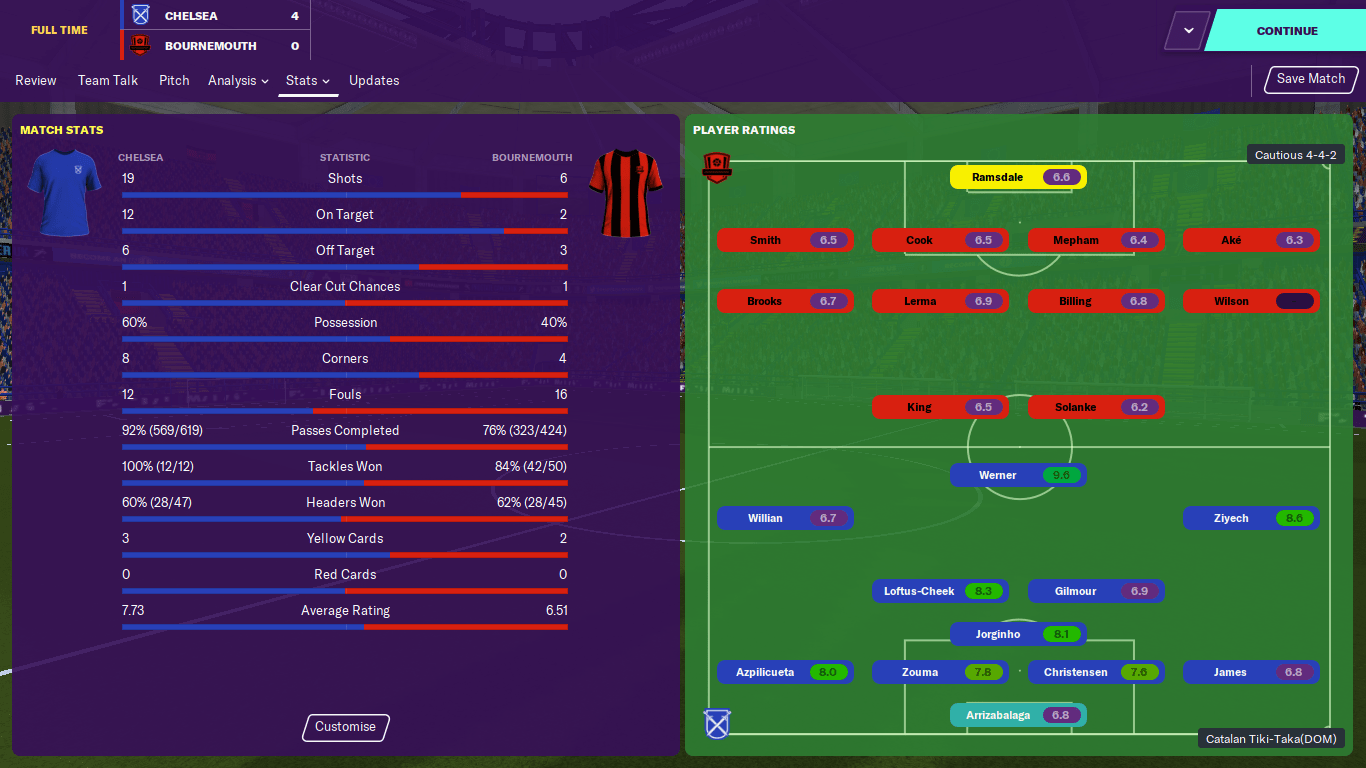 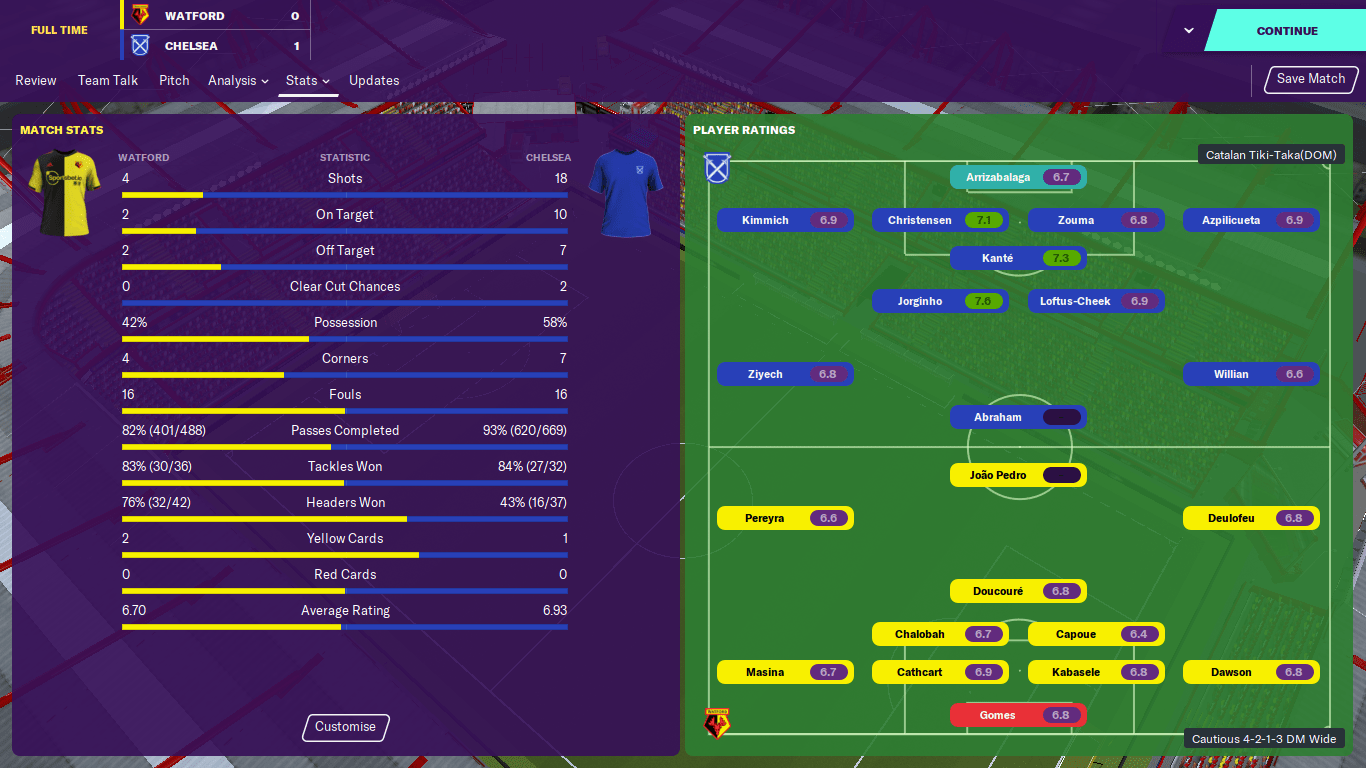 A discussion between Gary Neville and Jamie Carragher on Monday Night Football turns to Chelsea's chances in the Premier League. The pair discuss the positive but unspectacular beginning to their season, citing their period of transition. They agree that they expect Chelsea to be bound for an inconsistent run towards the Champions League positions, but credit the positive start made by the manager and his players. 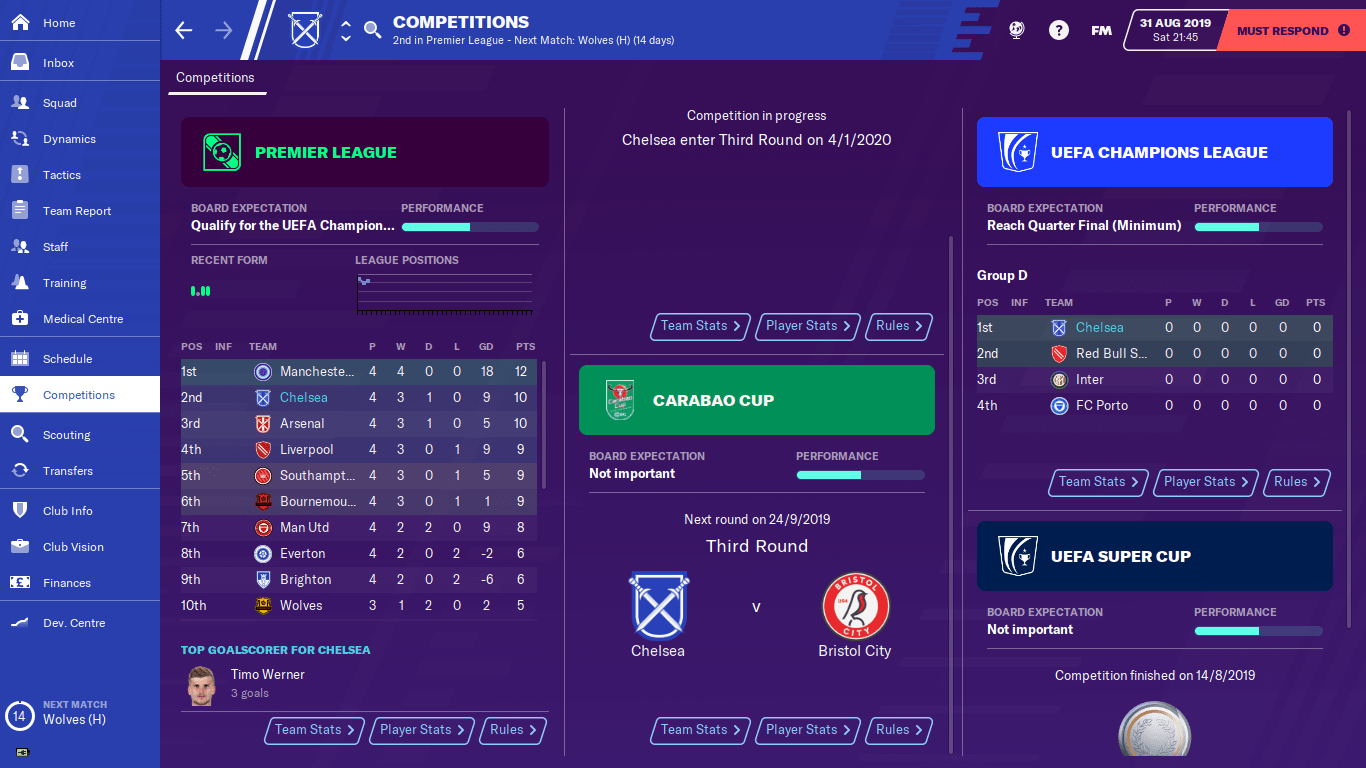 Champions League group of Inter, Porto and RB Salzburg. Catalán expects to qualify in first place to secure a strong chance of qualification to the last 16, and then 8 of this year's competition.
Login to Quote

ScottT
2 years
The West Ham results aside, it's been a good start as expected given the opposition. A decent Champions League group for you that should enable progression to the last sixteen.
1
Login to Quote

You are reading "Tiki-Taka Rebirth - A Chelsea Story".