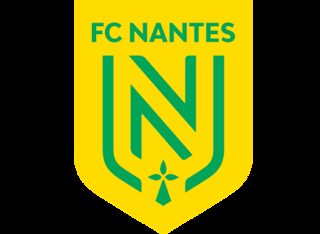 FC Nantes are a professional football club that ply their trade in the Ligue 1. They are one of the most successful teams in French football with eight Ligue 1 titles, three Coupe de France wins and one Coupe de la Ligue. The currently play at Stade de la Beaujoire - Louis Fonteneau which has a capacity of 38,128.

The last time Nantes won the title was in 2001 which is also the last time they played in the Champions League. The club has been responsible for break throughs by a number of French internationals over the years such as Mickaël Landreau, Didier Deschamps, Marcel Desailly, Jérémy Toulalan and Claude Makélélé.

Nantes finished in 12th spot last season, so the minimum requirements from the board would be; 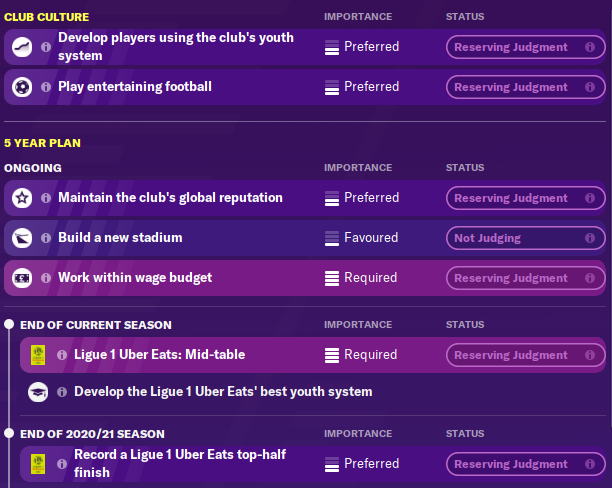 You are also tasked with developing players using the clubs academy along with playing an entertaining band of football.

The club is also looking to build a new stadium in the next 5 years which could help achieve the clubs ambitions if the capacity is right.

The transfer war chest is set at £6.14 million but they did bring in a total of 11 players during the transfer window on permanent and loan deals.

Nantes have great training and youth facilities which means plenty of investment is still needed to make them the best in the country.

The team has 4 players who you can use as the backbone of your starting XI for years to come with 2 coming through the Academy and currently in on loan with 1 having the option to sign and the other signing at the end of the season.

Currently on loan at the club until June 2021 and can join permanently at any point in that spell for £6 million which is an offer that needs to be taken up with him already being the best keeper at the club and he is only 20. He has the potential to be the next French No.1 along with the clubs No.1 for more than a decade.

A Ball Playing Defender who has come through the youth ranks who has the potential to be the start of something special at the club and should progress to be a regular in the national team.

A central play maker who came through the clubs academy who has aspirations in captaining the club one day. He could be a key midfielder for the club going forward who might realise his dream with a leadership course or two.

Currently on loan from EA Guingamp after their relegation last season and will be joining the club permanently at the end of the season for £7 million. At 21 he already has 4 seasons of experience in Ligue 1 and will form a midfield partnership for years to come with Louza hopefully.

With the squad that we have then we will be looking to control the possession and we will also be looking to play with a CDM to help soak up some of the attacks coming our way by helping out the defence. 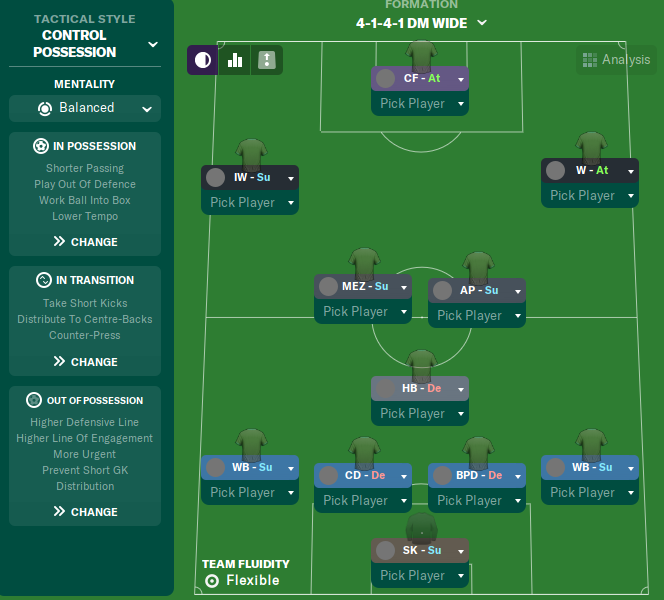 1. Team Chemistry may be a problem initially with many of the squad players being new and you could let crucial points slip away by the time the squad gels.
2. The squad lacks depth and quality in a number of positions. The club requires a new Left Back, Wingers for both sides of the pitch and a Striker capable of getting goals every week.
3. May lose a few good young players at first if bigger clubs take notice and come in with bids until they can be guaranteed European football and challenging for silverware in France.

As stated in the previous update there were a number of areas we needed to address in the transfer windows and I decided to focus on one area in this window and with only 1 player capable of playing Left Back we needed to bring in another one before we did anything else. With that in mind I wanted a young hungry player who will fit our formation and will grow with the club. With that I settled on Noah Katterbach who arrives from FC Koln for an initial £5 million with another £4 million over the next 3 years. As we progress and change formation as we bring in more players then we can change how we use him as well.

We only had one player leaving the club with Anthony Limbombe joining Frankfurt for £1.7 million. He wasn't going to feature in the first team so we cashed in while we good an it also meant we could free up some of his wages.

We played a total of 17 friendlies this season to ensure that everybody got use to the tactics and also started to gel since 12 new players were brought in over the course of the summer. It helped start to build the relationships between our key players as well. 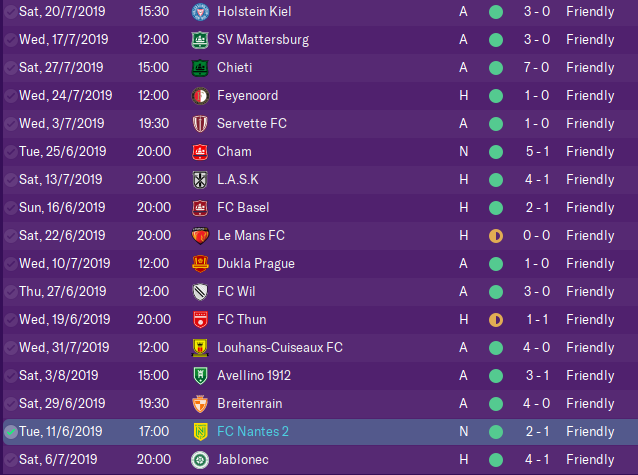 The league should hopefully be a walk in the park to get a mid-table finish and we will be aiming as high as we can to get this club back to the top. In the cups we will be reliant on the draws but hopefully we will meet the expectations of the board.

TheLFCFan
1 month
Thats a very nice signing in Katterbach who already looks an exciting prospect. A lot of friendlies were played but as you said in the opening update, you needed to find some team chemistry and those games will have done just that. Good luck.
Login to Quote

ScottT
1 month
A very good signing in Katterbach. Sensible to play so many friendlies too given the need for players to gel.
Login to Quote

The only way our opening game could of been any harder would of been the reverse of this fixture so maybe we were lucky it was in Nantes. Neymar tore us to pieces though and scored an excellent hat-trick over 70 minutes before Katterbach scored a consolation goal on his debut from 25 yards out. WE were able to bounce back with a in against Stade de Reims. Against Lille we looked very good value for the win before conceding a last minute equaliser. We round off the month with a hard fought win against Amiens where we took a 2-0 lead before conceding with 10 minutes to go but we were able to hand on this time.

From the games we've played so far then 9th spot is very respectable so far and hopefully we can keep the momentum going.

TheLFCFan/ScottT - Thanks, hopefully he will stay at the club for years to come and develop. Sadly no many friendlies were able to prepare us starting off against PSG

We pick up where we left off last month with a great win against AS Monaco. It was a a great defensive performance with Coco catching them on the counter with the only goal of the game. Montpellier are always able to mix it up and they got an early goal and we just weren't able to get going after that. In our first Breton Derby both teams were right up for it as it showed with some of the tackles that were being made but it meant both teams finished with 10 players on the pitch. Niang got the opening goal right before half time but we kept on fighting as we got the equaliser in the 65th minute from Coco. We finish the month as we started it with a win. All goals came in the first half with us falling behind in the 9th minute before Emond has us in front after 27 minutes.

We're slowly moving up the table and just off the European places which I would take at the end of the season right now.

TheLFCFan
1 month
PSG can be considered a write off anyway, the rest of the results have been great and you are looking good so far this season.
Login to Quote

ScottT
1 month
A decent start to the season. I think you can be quite pleased at this early stage of the season.
Login to Quote

OneMoreGame
1 month
Nantes always have been fun team to watch, good luck with the career!
Login to Quote

We get off to a great start this month as Bamba gets an excellent brace in the opening 20 minutes against Metz as e win 3-1. We were very fortunate against Toulouse as we fell behind after 70 minutes only for Emond to score in the 90th minute to rescue us an important point. Against Lyon it all looked to be going well for us to be awarded a penalty in the 4th minute for Blas to blast it over the bar but thankfully Coco came to the rescue and got us the 3 points in the 49th minute. For the final game of the month we welcomed Marseille in the Coupe de la Ligue and thanks to Emond we will now go into the next round.

After 11 games we're sitting in 4th spot, How long can this last and will we stay in the European spots for the rest of the season.

TheLFCFan/ScottT/OneMoreGame - its a better start than I expected so lets hope it continues.
Login to Quote

Well there isn't a lot to say about this month at all as we were truly awful. We were missing a couple of players via injury but thats no excuse for how we played. It shows up the quality we're missing and how far we've got to go to compete at the top of the league

We'll we've dropped down the league but we're still only 5 points off of the European spots so we're still in the pack.

TheLFCFan
1 month
Top four early on and not too far off the 'big boys' of the league. Great start.
Login to Quote

ScottT
1 month
A pretty torrid month. It happens though - pick yourselves up and come back stronger.
Login to Quote

You are reading "FC Nantes - The start of something special".