Nerazzurri
1 year
Got bored with all my games, gone with something different. Hopefully it pans out ok. 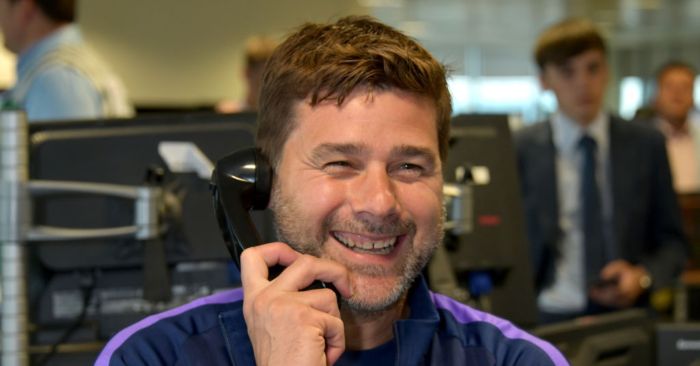 November the 19th, 2019 was a very sad date for 95% of the Tottenham fanbase as popular manager, Mauricio Pochettino was sacked from his position and immediately replaced by Jose Mourinho the very next day. In the end they finished 7th in the Premier League, Semi-Finals of the Champions League losing to eventual winners, Real Madrid. And defeated Manchester City 2-1 in the F.A Cup Final to win their first trophy in twelve years.

“It’s been hard being away from football for the past six months, but i’m feeling refreshed and excited about the challenges that lay ahead. I know during my time at Tottenham i said winning trophies builds egos, and they do. But that doesn’t stop me from wanting to win major trophies. And i want to work in a project that will give me the opportunities to do so. I don’t want to wait another five years without another trophy. My career is short, and i want to look back on it with huge amounts of pride.

I’m proud of the jobs i did at Espanyol, Southampton and Tottenham with limited funds, but i want to hit that next level. The level that Jurgen (Klopp), Pep (Guardiola) and Jose (Mourinho).

In the past i’ve also said that i would never manage the rivals of teams i’ve managed. But with the lack of top level jobs available, and if the package and project was appealing then i would do so now.”

ScottT
1 year
Intrigued to see where Poch heads to. I'm sure there will be plenty of interest in his services.
1
Login to Quote

Nerazzurri
1 year
After a long and agnosing seven months away from Football management, Mauricio Pochettino is finally back in the spotlight. After firstly turning down an emotional return to where his management career first began at Espanyol, but Pochettino refused to even attend their offer of an interview.

“Returning to Espanyol hasn’t been in my thoughts at all. Once i’ve achieved everything i’ve set out to in my career, then a return to where it all began will appeal to me. But not now.”

With offers from Borussia Monchengladbach and Wolves, Pochettino stood firm in the hope of the one he really wanted would come to fruition, and eventually it did.

Cholo Simeone was sacked after finishing 2nd, a huge 11 points behind arch rivals, Real. Who not only won the Championship, but did so unbeaten. And added a Champions League trophy to that, after beating Liverpool in the final for the 2nd time in 3 years. After suffering a round of 16 elimination at the hands of Juventus, the Atletico hierarchy knew it was time for a change. Considering the amount of expense went into reshaping the squad.

“I’m really, really happy to be joining Atletico. It’s a shame that it’s at the expense of a good friend in Diego, but that’s life, that’s football. I had offers from the Premier League and Bundesliga, but i wanted to comeback to Spain. And this was the perfect place to do so. It has so many similarities with Tottenham. Great new stadium, brilliant facilities, perennial underachievers, in the shadow of their nearest and fiercest rivals. Ambitious men in charge, but unlike at Tottenham i will have money to spend. Transfers will be my domain. I will live or die by them.

A rebuild of the squad is needed. Not only is it an aging squad, but it’s also an unbalanced squad. 3 RB’s and only 1 LB, it all needs readdressing and i’ll learn from the mistakes i made at Tottenham.”

Deadzpool, LugoManager : Even though Barcelona was insecure, they haven't sacked him yet. And Milan and Roma weren't available. If Roma was, i would've been interested in going there.
Login to Quote

AM is going to be quite a change in system.
1
Login to Quote

ScottT
1 year
Best of luck with Atleti.
1
Login to Quote

With Jan Oblak as the Atleti number 1, Axel Werner won’t be loaned out this season and will make an ample backup.

Santiago Arias, Sime Vrasliko and Keiran Trippier are currently on the books, but for Mauricio he will be looking to move all three on and improve the full back situation on both sides.

Renan Lodi is the only LB in the first team squad, and those in the U19 and B teams aren’t of the required quality to step up.

One area of the pitch Atleti have quality in abundance. With Jose Gimenez, Mario Hermoso, Stefan Savic, Felipe and the returning Nehuen Perez.

Another area Atleti are stacked in with Saul, Koke, Partey, Llorente & Herrera.

Angel Correa, Thomas Lemar, Joao Felix and Vitolo are the names to look out for, going forward. As the first team attacking midfielders look strong, the depth however is lacking.

With Alvaro Morata, Diego Costa and Nicolas Ibanez, some could say this is another area that Aleti are stacked in if you play one up top, like Mauricio has done in the past. But with Costa on his last legs, Ibanez not up to scratch, Pochettino could be looking to upgrade on those two at the very least.
Login to Quote

TheLFCFan
1 year
Not my favourite of teams as I said last night in chat, but best of luck

ScottT
1 year
Some work to be done to push Atleti up to the levels of Madrid and Barcelona but there is definitely quality in this squad.
1
Login to Quote

You are reading "Mauricio Pochettino - The Next Chapter".