ScottT
2 years
Not too bad. A defeat against Olympiakos isn't the best but every team has an off-day.
Login to Quote

The United Resurgence: The Keane Story 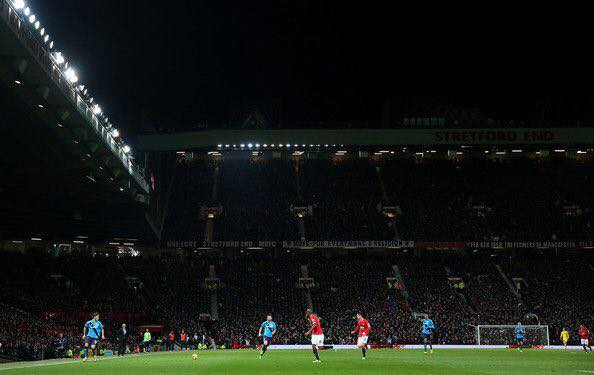 This month has been a good month. There has however been one defeat but that was a Wolves team that was truly superb! There was also a match where Keane unleashed a 5-2-1-2 wingback system against Arsenal (very lucky to draw!) Edinson Cavani also scored FIVE in a Champions League and followed it up the next match with another goal for 6 goals in 2 matches.

United marched on in the Champions League but Olympiakos continued to impress and most of all continued to win. 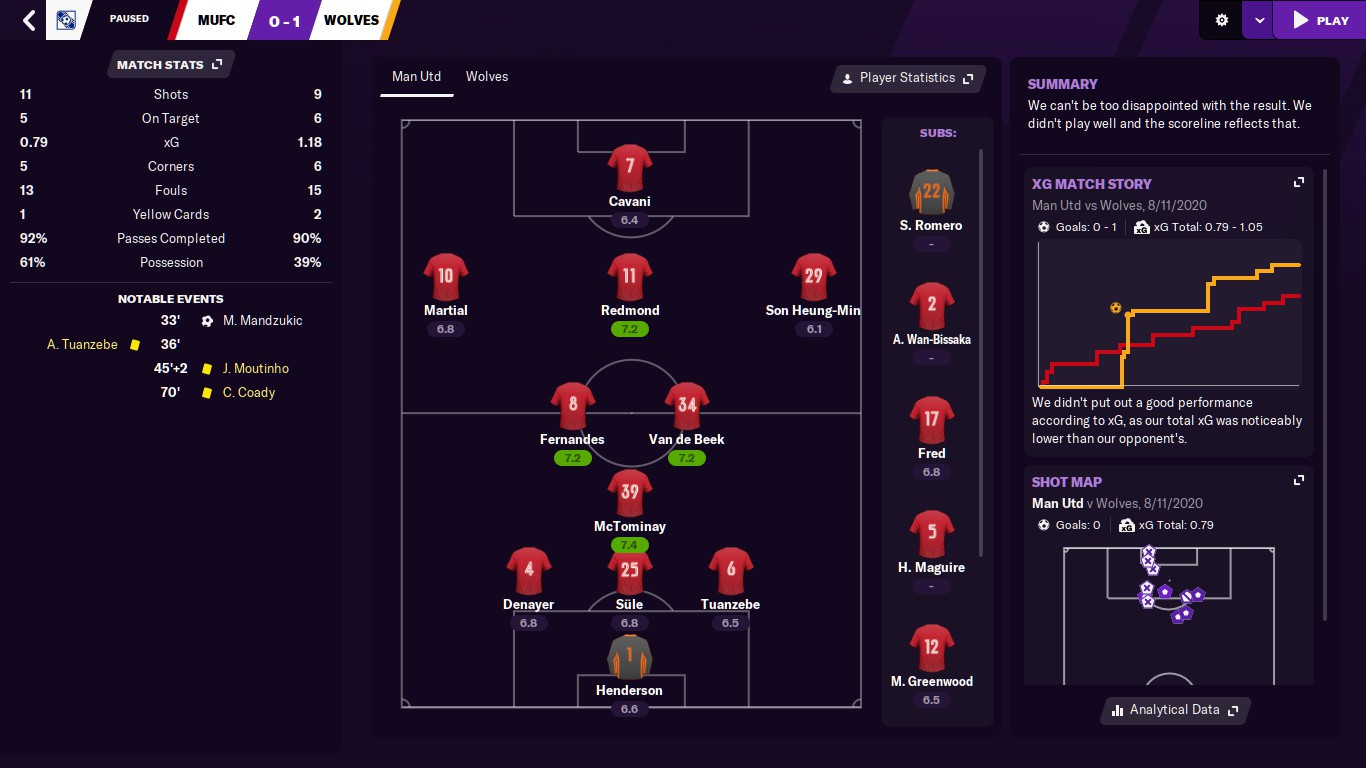 United started Denayer, Sule and Tuanzebe in the starting line up for this match with Maguire missing out. However for the first time this season United were outmuscled, outplayed and very lacklustre. The goal scorer for Wolves? Mario Mandzukic and it was a fantastic goal with Joao Moutinho and Raul Jimenez linking up with each other and then a towering Manzukic headed goal was the decider in a tense match up. Manzukic has been excellent since he moved on a free transfer and Wolves were deserved winners. 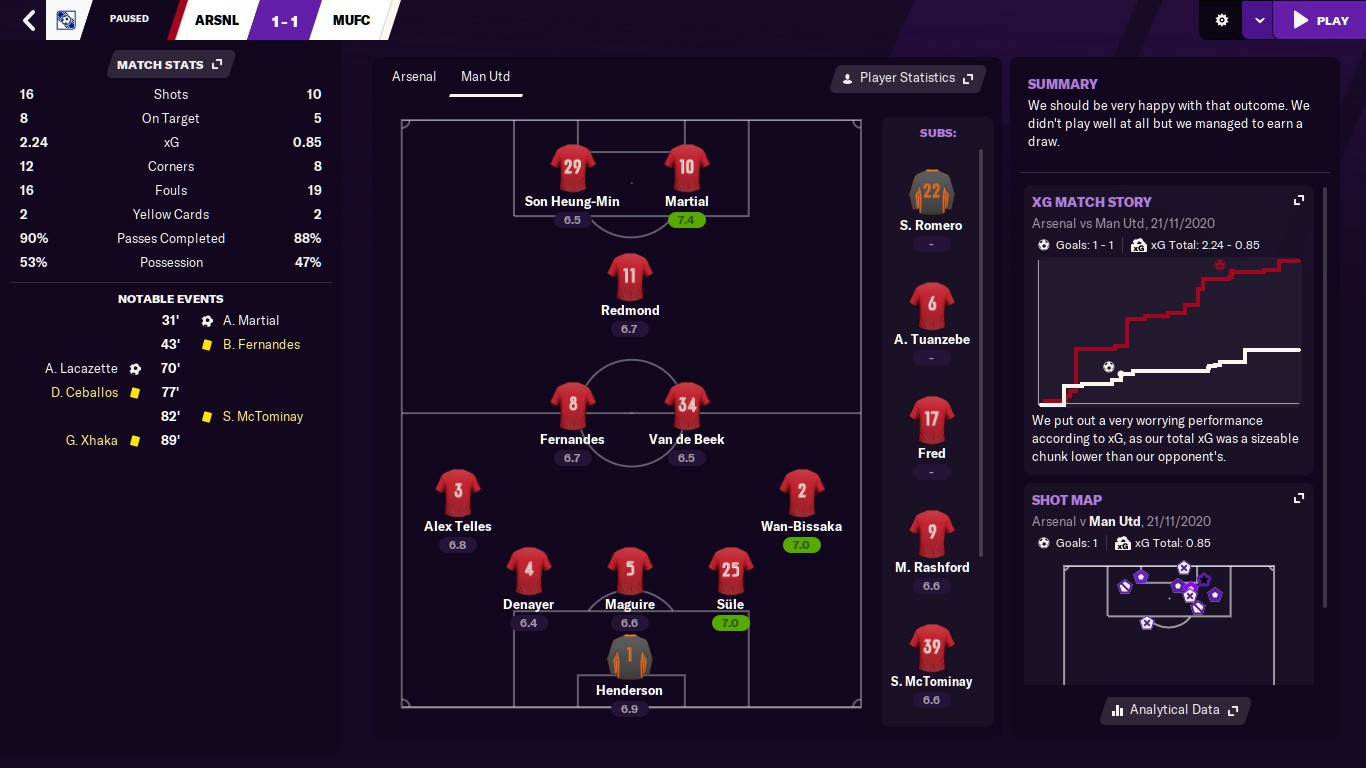 Martial (31)
So for the first time this season there was a change in formation but Keane still stuck with the three at the back, only with two wingbacks in the starting 11. So Alex Telles made his long awaited debut. Marcus Rashford was dropped due to poor form and Scott McTominay dropped to the bench. Nathan Redmond played just behind Martial and Son.

There was a reason for this as Arsenal were destroyed by Burnley, who played this exact formation. Today though was a different sort of game and one that Arsenal should have won. United looked uncomfortable and it kind of suggested that Keane, whilst probably having his defence covered, needs at least a midfielder and another striker in January.

Martial scored against the run of play with a solo run from an Arsenal corner. United then defence doggedly but were undone in the 70th minute when Granit Xhaka sent a chipped ball over a sleeping Harry Maguire (not the first time that's been said this season) for Lacazette to volley home for 1-1. It was the least Arsenal Deserved 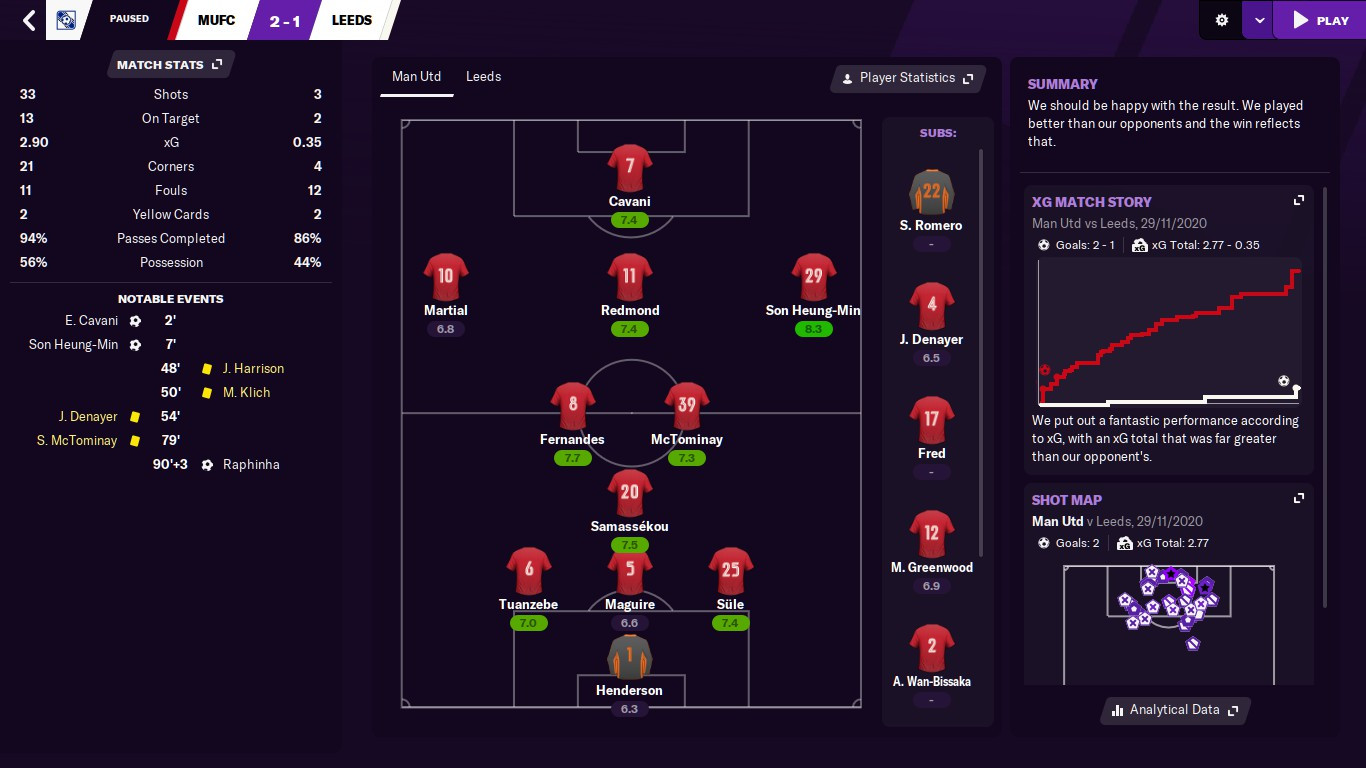 Son Heung-Min (7)
Edinson Cavani was given a starting slot after scoring 5 goals in the Champions league and it took him just two minutes to score against Leeds. Rashford, on the bench again due to Martial being pushed out to the left wing watched in horror as Cavani continued to stake his claim for a regular starting spot.

With Van de Beek injured, McTominay was moved into the central midfield role and Samassekou came in to start in defensive midfield. It was Samassekou who started the move off with a delightful clipped ball to Son, who fed Redmond, back to Son who then crossed for a Cavani header.

Just as Leeds would have wanted to regroup, in the 7th minute it was 2-0 and this time Cavani turned provider, selflessly laying the ball off to Son to hammer home. Maguire again had a game to forget and had been sluggish all first half so was replaced at half time. Samassekou and McTominay for me had great games. Samassekou appears to be on the fringes of Keane's thoughts for a starting slot and if Keane wants McTominey to eventually be a CM then Samassekou is a ready made replacement. United had a whopping 33 shots on goal and were fantastic. What an entertaining match this was for two reasons. Firstly this was United at there attacking best! There was a distinct improvement in the tempo to the match. United were at it from the first whistle but it was actually Sevilla that struck against the run of play with a neat finish from Suso. He managed to take advantage of the United defence's high line.

It took United less than half an hour to equalise and it was a usual story. Fernandes with the pass to Son, who drove into the box and laid the ball off for Redmond to slot home. It was no less than United deserved. United continued to pressure and Son looked imperious on the wing but again Rashford was flattering to deceive. After half time United carried on where they left off and got what they deserved when Van de Beek played a delightful through ball for Son to hit home and give United a 2-1 victory which was thoroughly deserved. So Sevilla set up more defensively this time learning there lesson from the first game. They contained United in the first half and you can see by the ratings of Rashford, Redmond and Son, they did a good job. At half time Keane took off Rashford moved Martial onto the left wing and inserted Edison Cavani into the attack. Sevilla's defence were quite tall and throwing the ball into the box for Martial wasn't working so in Cavani playing as a pressing forward it was hoped he would have some luck.

Luck he had! in the 55th minute, Fernandes (who assisted 3 of the goals) played Cavani through for the Uruguayan to score his first goal of unknown to him at the time would be a 3 minute hattrick. His second and third goals were from corners and great headers and in a blink of an eye the game was over. United carried on pushing though and when Cavani smashed in his 4th goal Sevilla gave up and then Cavani destroyed Sevilla's hopes of getting to the knockout stages by hitting a 5th goal in. 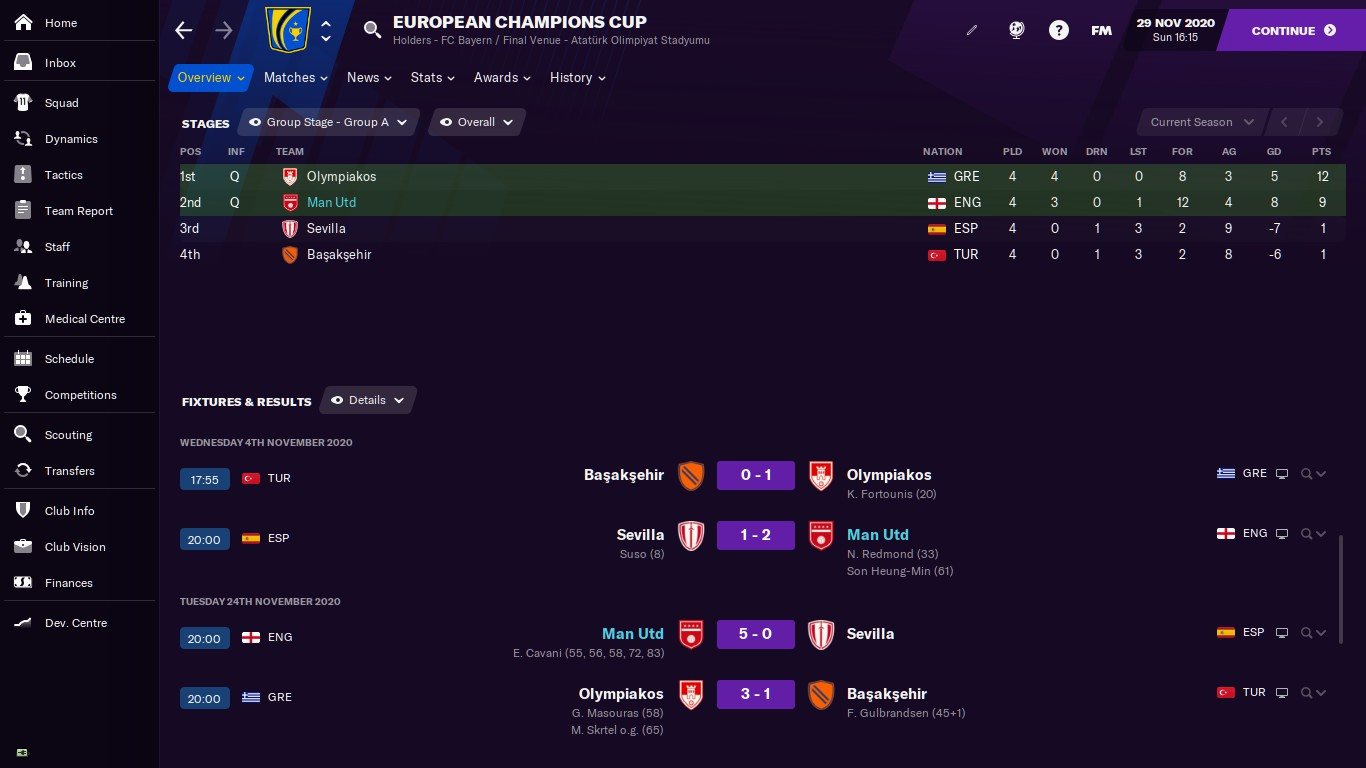 Again surprise team Olympiakos keep up there 100% record but have finally lost a match in the Greek Super league but already there streaks ahead in that and it should go down to the United vs Olympiakos week 6 match to see who will win the group. 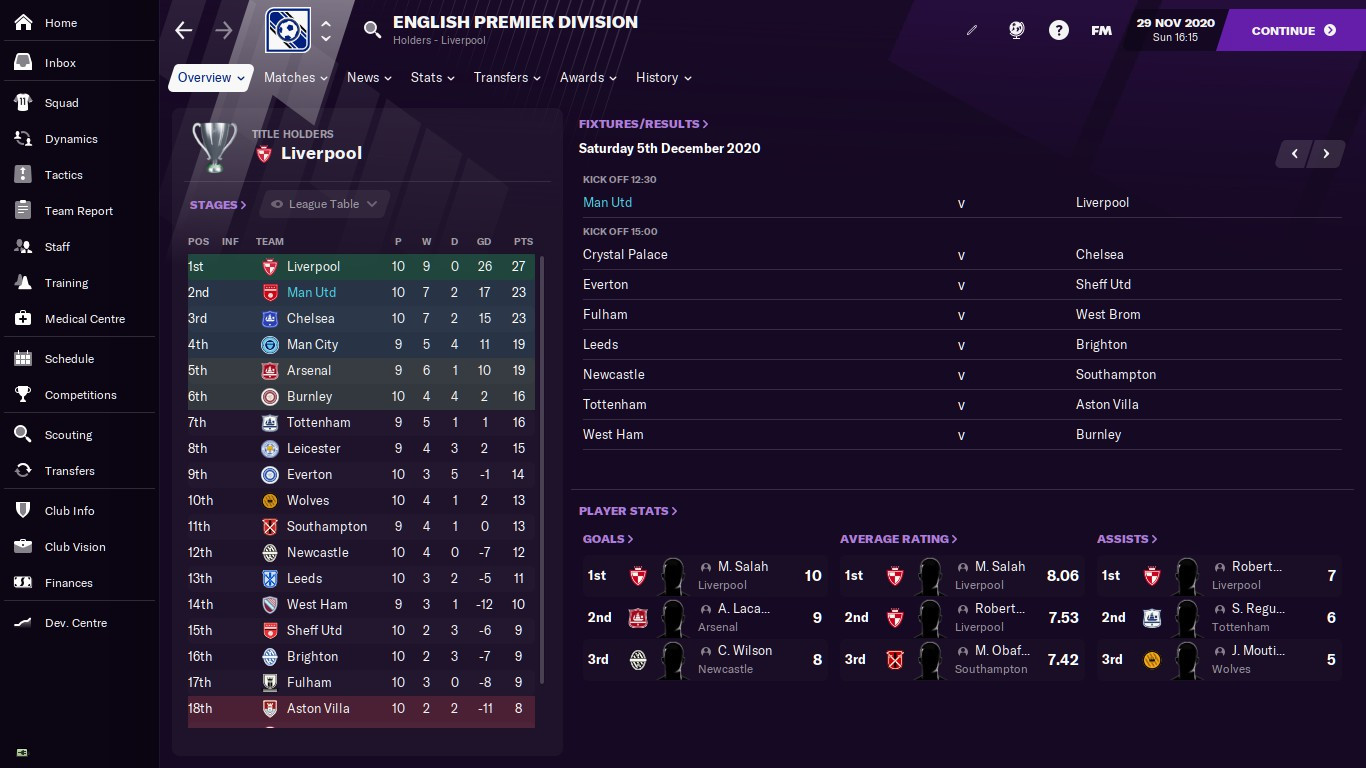 Man Utd were top last month but have been replaced by Liverpool. Chelsea and United share second but United have a better goal difference. Burnley continue there good form and are 6th ahead of Spurs, Leicester, Everton and Wolves. Villa, Palace and West Brom prop up the table. You can see the huge match next for United is against Liverpool, already a must win for Keane's men.

I feel this month has been a successful month. I think we were very fortunate to get a point in the Arsenal match. Wolves outplayed us and I have to hold up my hands for that and I feel that the wingback system did not really work but I might still come back to it in the future.

Cavani and Son have been excellent this month and I believe we have a good squad of players but we do need a couple of reinforcements which I will look into in January. I think that Harry Maguire needs to work out if he is in this project for the long term or not though because whilst I will keep faith with him for now as he is my captain, we have good defenders looking to get in on the action. Axel Tuanzebe has been really impressive when I have picked him, Sule and Denayer, well we new what we were getting with them and Aaron Wan-Bisaka has been good at centre back when I have played him there. We have a busy Christmas period coming up along with the Carabao Cup quarter final. There will be chances for a lot of these guys going forward.

Keane's Player Of The Month 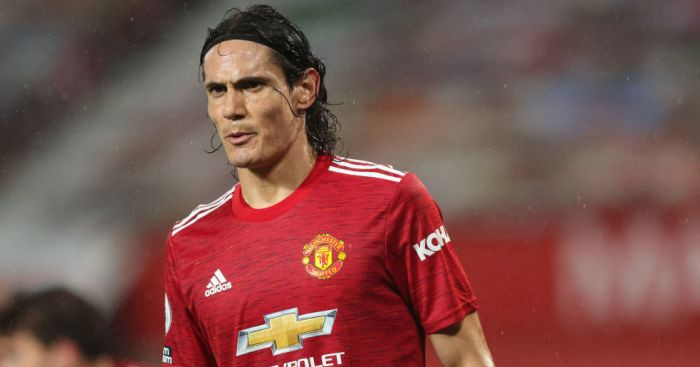 has been excellent this month and anyone that scores 5 goals in a match which included a 3 minute hattrick then gets my vote for player of the month for me. His work rate has been excellent and he has been very patient and then took his chance as soon as it was given to him

ScottT
2 years
Not too bad.
Login to Quote

TheLFCFan
2 years
Some very interesting moves in the summer, no more than Redmond, who I don't believe is of the quality of a title winning squad, but he seems to have started well. I am interested to see how much more gametime Greenwood will be getting as he is surely the future for the club. Son signing is a great one!! A good start keep it up.
Login to Quote

You are reading "The United Resurgence: The Keane Story".