LeGaffer
1 year • Edited
One day I want to be more successful than Sir Alex Ferguson," said the Gaffer.

The Gaffer took his Paris FC side from the second division of the French footballing league to the top division the Uber Eats Ligue 1. With the likes of PSG and Monaco the most dominant teams in the league, no pundit thought the Gaffer would win the Ligue 1. After many years of building his squad, coaching staff, and tactics, the Gaffer conquered France then Europe. The more silverware his Paris FC side won, the team still could not overtake the big brother Paris Saint-German. The Gaffer would eventually run out of time to catch up to PSG before the release of Football Manager 21. Winning the treble was the highlight of the Gaffer's career but he could not surpass his favorite football manager Sir Alex Ferguson. Therefore, he set his sights on making sure to become the world's greatest football manager in FM21 by emulating his hero Sir Alex. After culminating months of extensive research on his football manager idol, he decided to attempt the Sir Alex Ferguson Challenge on FM 21.

Here is the challenge:
To Begin-
Start as unemployed, holiday until Nov 6
Then take over the 2nd from the bottom of the league in the Premier League

The Rules:
1. No usage of the in-game editor
2. Promote as many youth players as you can and have a minimum of 1 player promoted from the youth academy in every single matchday squad. (Giggs, Beckham, Neville, Scholes were all part of the youth system and went on to become legends at the club)
3. No buying or selling from/to your direct rival.
4. Promote at least 1 new player to the youth academy to the senior team every single season.


The Headline: Steve Bruce Sacked in the Morning. After a dreadful start to the 2020 Premier League campaign, President Mike Ashley relieved Steve Bruce of his duties as manager of Newcastle United.

The Toon Army fans were voiced their concerns after Newcastle United lost 5 out of 6 Premier League matches placing them in the relegation zone. One fan stated, “There is no way the mighty Newcastle should be fighting against relegation”.

Players were infuriated with the tactics, training methods, and negative locker room atmosphere at the club. Mike Ashley was quoted saying "I wanted to keep Steve Bruce, but my hands were tied so he had to go blood". Disappointed with the club’s performance in the league, Steve Bruce blamed the players for lack of intensity, care, and passion for the game.

He stated, “There is no passion, aggression, effort, and this club is a complete joke.” It is safe to say, Steve Bruce and Newcastle were not on the same page. But harsh words from the former manager as with the quality of players in the squad, the club should not be fighting for relegation.

Will this be a chance for Big Sam Allardyce to take over another club in the relegation zone or will a different manager take over?

The French manager struggled to find a club in his native country and before he decided to challenge himself in the Premier League. I asked him why he decided to take the Newcastle job. He stated, “I want to be like and better than Sir Alex Ferguson”. That is quite the challenge considering this job will be his first-ever in the footballing world. 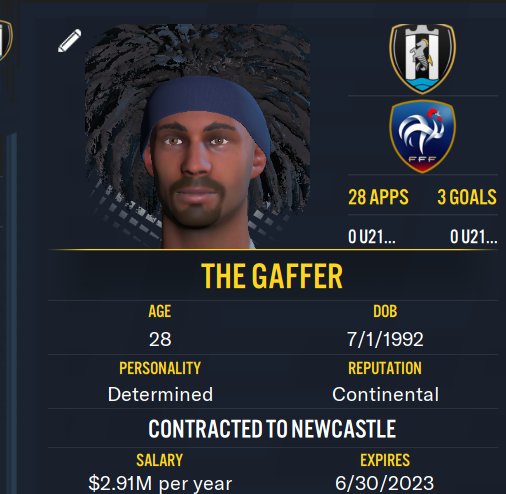 In his managerial career, Sir Alex won 49 trophies, no other manager has come close to him. He won 38 trophies as the manager of Manchester United alone.

The Gaffer was adamant about becoming the best manager in the footballing world and surpassing his idol. The question is Can he win the Prem with Newcastle or even the Champions League with them?

The Gaffer certainly thinks so however, other pundits’ questions will his obsession with being the best lead him successor to his demise at Newcastle.


With only a budget of 2.3 million to spend in the upcoming January transfer window, the Gaffer decides to not sign any players as it might ruin the team cohesion. The squad quality is adequate to escape the relegation zone and at least finish in the lower half of the table.

The defense is the issue at the moment so looking ahead, the summer window will be dedicated to building a semi-new back four. Apart from the defense, the midfield position will be upgraded in the 2022 transfer window then potentially the forwards if need be.

GK: Martin Dubravka, Karl Darlow, and Mark Gillespie will be sold either at the beginning of next season or the season afterward. Both keepers are old and the Gaffer will be looking to bring in the likes of Lunin from Madrid or Alban Lafont if both are available at reasonable prices.

DEF: All center halves are above the age of 26. Will be keeping Lascelles for a couple more seasons and selling the rest in the summer transfer window.


The aim is to bring in multiple young center halves to develop into world-class players in the bid to win the league in 13 seasons. Profit can be made from selling Schar, Dummett, Fernandez, and Clark. Jamal Lewis will be the starting left-back with Ritchie as a backup until sold.

The Gaffer will be looking to bring in another LB to compete with Lewis. As for RB, Yedlin is good enough to start over Kraft and Manquillo. Will be bringing in a young RB to develop for the future.

MID: Midfield center pairing looks to be solidified for the future with the Longstaff brothers. Hayden and Shelvey will be the main pairing because of experience.

The goal is to sell them for profit after the season and invest the money into the defense. Jeff Hendricks will be sold for profit in the summer. Young Rodrigo Vilca will be the backup for Almiron in the attacking mid position.

Saint Allan Maximin is arguably the best player at the club and it would be difficult to keep top clubs away. He will not be sold unless a bid of over 60 million comes in for him.

Fraser, Atsu, Aarons, Murphy, and Lazar are not good enough for the club long term and will be sold in subsequent transfer windows. The Gaffer has his eyes set on Ebere Eze and Ryan Kent as starting future wide midfielders at the club.

ATT: Callum Wilson will be tasked with scoring the majority of the goals as a lone striker in the 4-4-4-1-1 formation with the help of Miguel Almiron.

Joelinton will be the backup as he is young and has decent potential. Until the Gaffer signs Eddie Salcedo or Sebastian Esposito to replace him in the future.

Andy Carroll and Dwight Gayle are deadwood at the club since they are over 30 years. Andy Carroll has been at the club way too long for the liking of the Gaffer and would be offloaded sooner rather than later.

The Kids- The Gaffer believes in the famous saying “if they are good enough, they are old enough to play.” One of the rules of the challenge is to promote one youth player to the first team each season.

Yannick Touré and Woodman (on loan) will be promoted in the next season. He has the potential to be a good striker for the club. Other youngsters are decent prospects.

Hopefully, the youth intake will provide the club with some high potential youngsters. The Gaffer will be heavily involved in recruiting young players from other clubs around the world to join the club.

Notes: I saw a similar story on here in FM 20 and I wanted to give it a go in FM21. This is my first save in FM 21 as I had doubts if I should purchase the game since FM20 gave me a lot of headaches. The ME was tried to do me dirty in my main save with Paris FC. Anyways, I think this will be a fun challenge to do. Hopefully, I am successful in completing all the challenges in 27 years if not I can say at least I tried. Feel free to provide feedback and comments.
Login to Quote 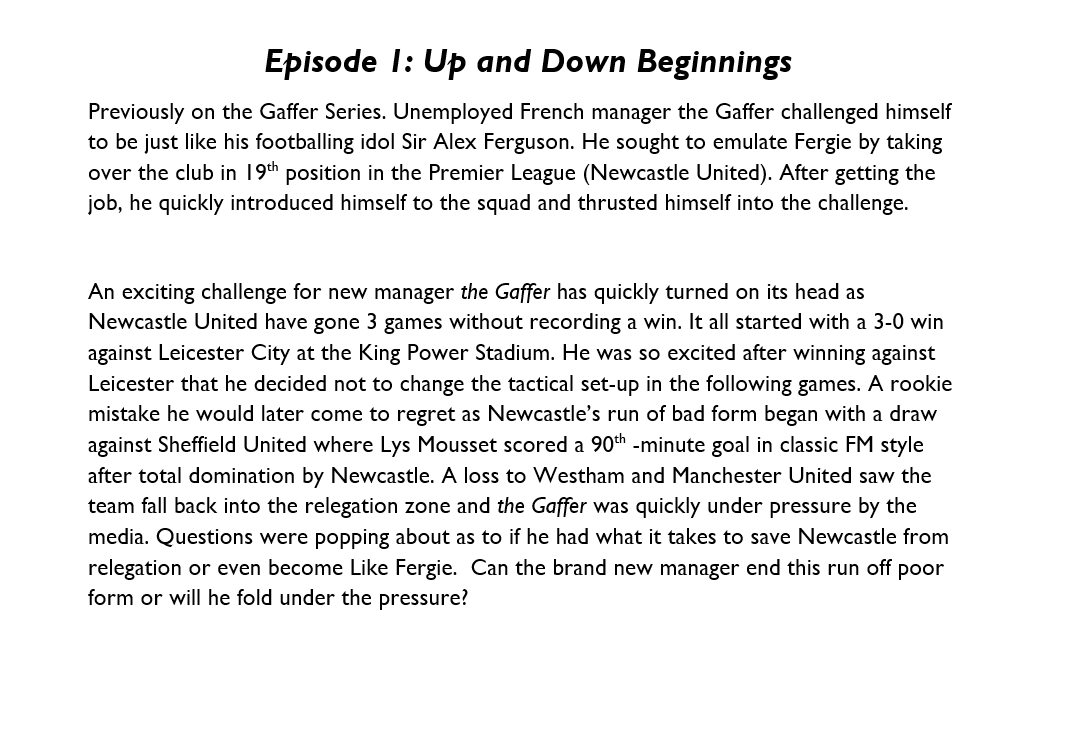 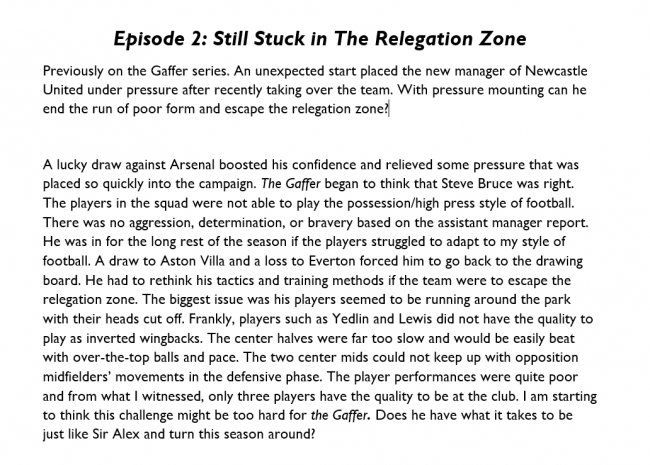 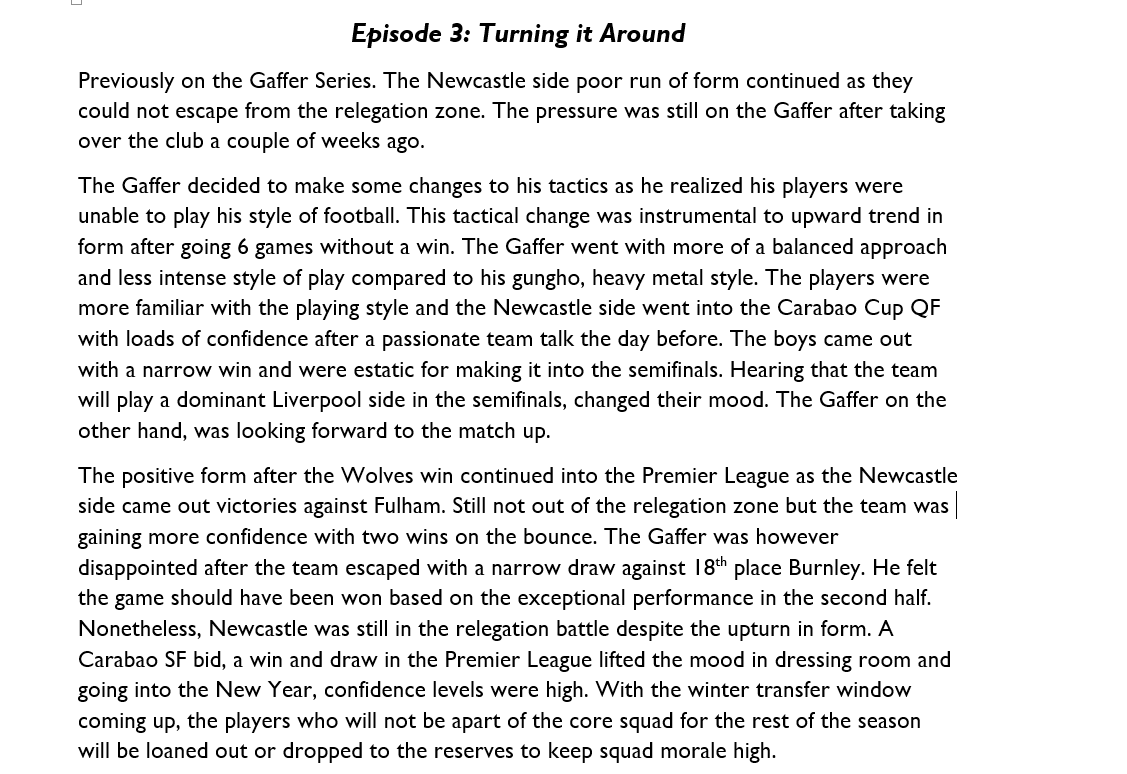 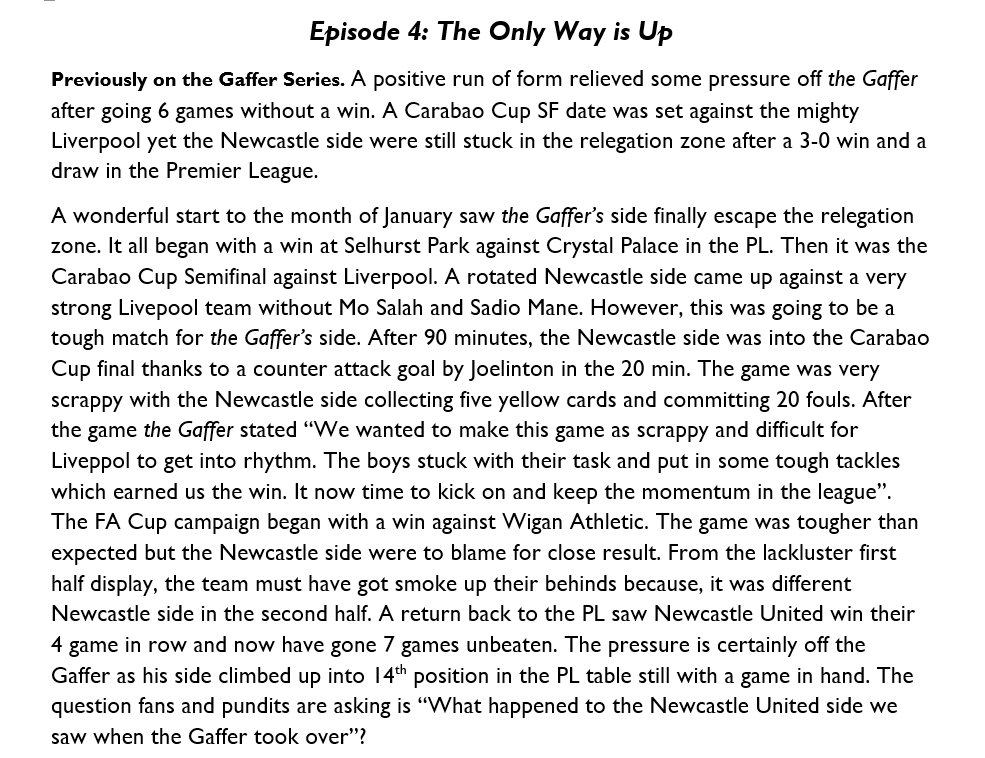 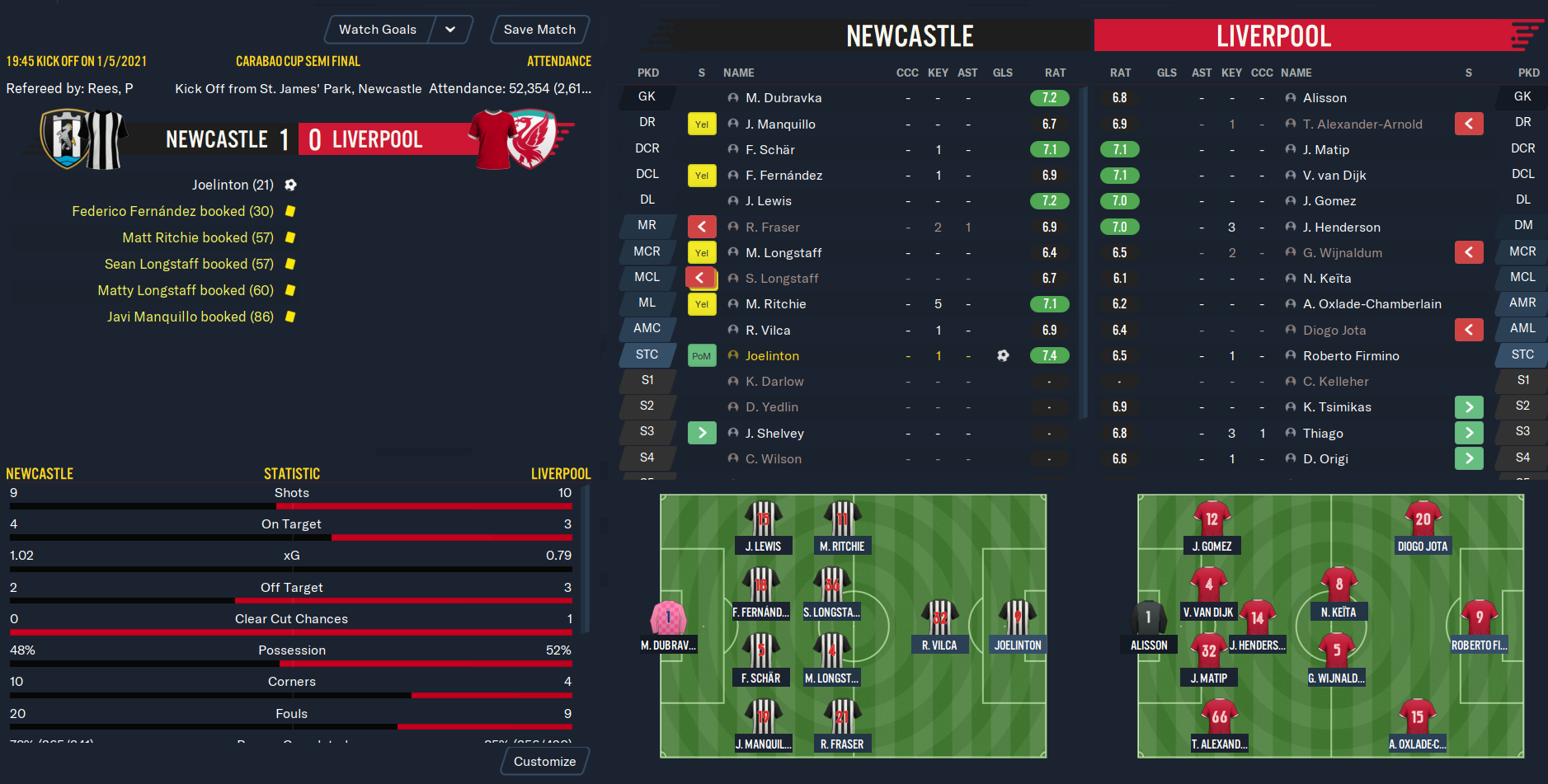 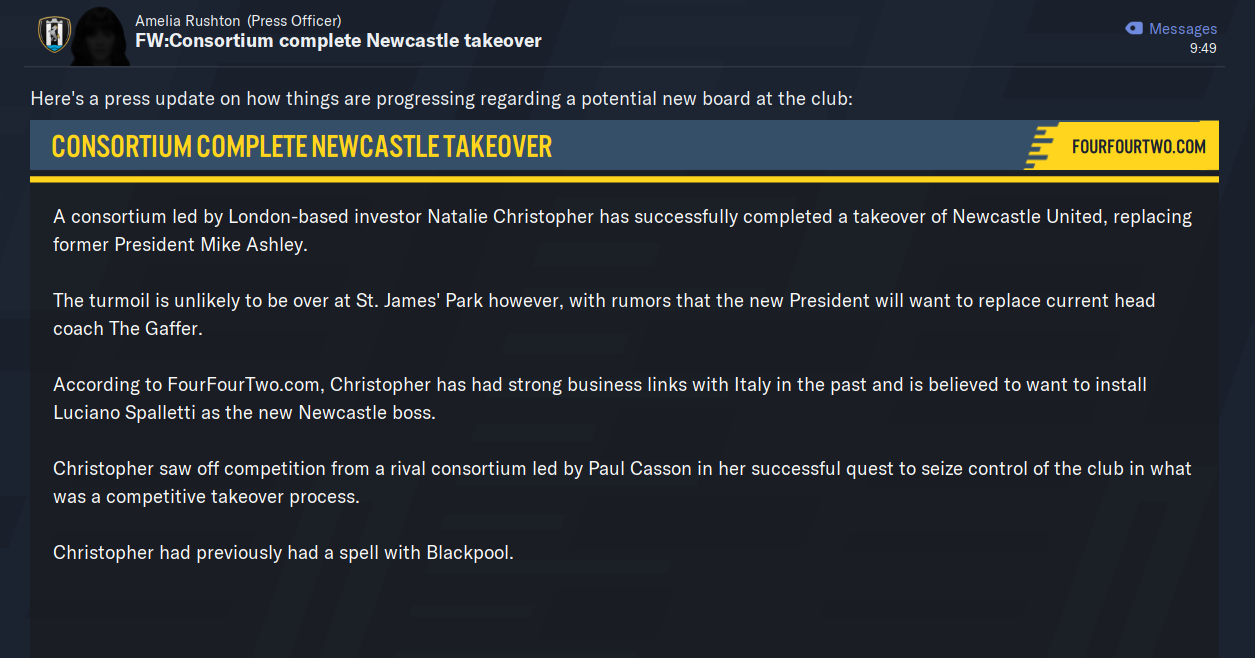 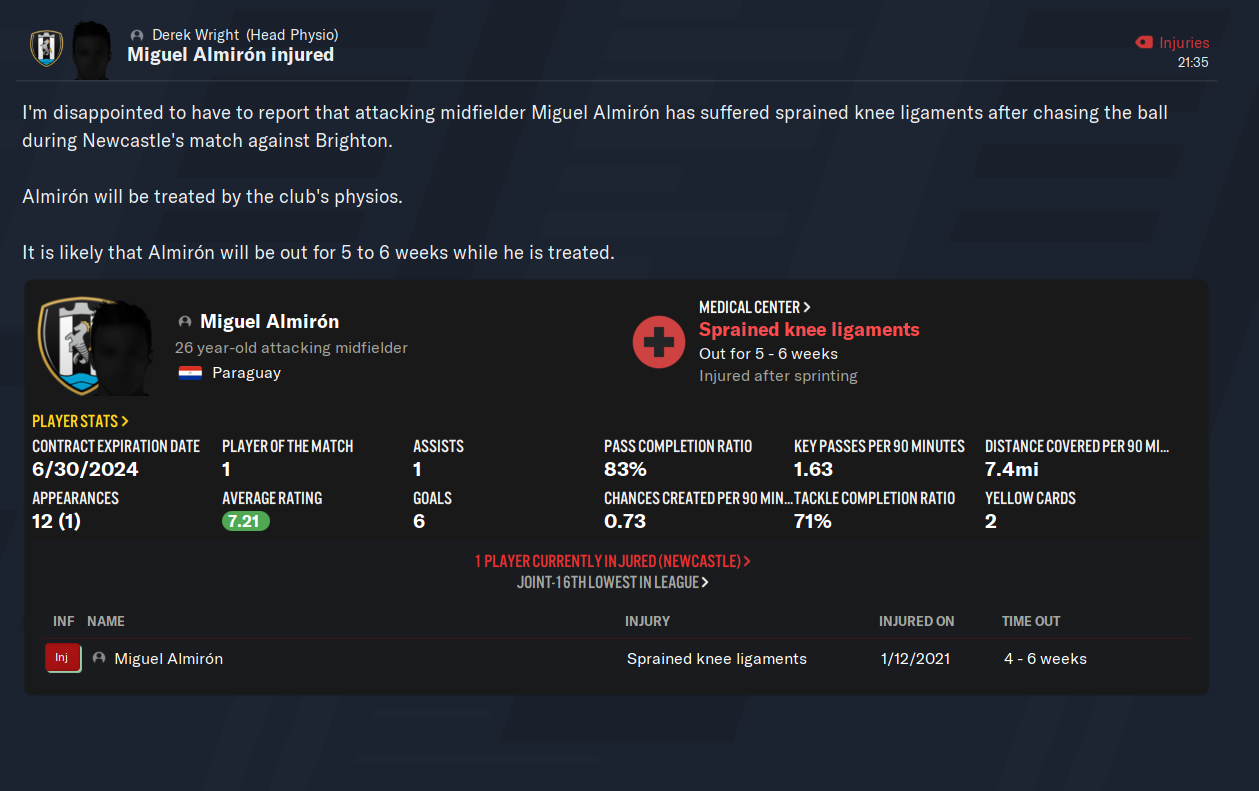 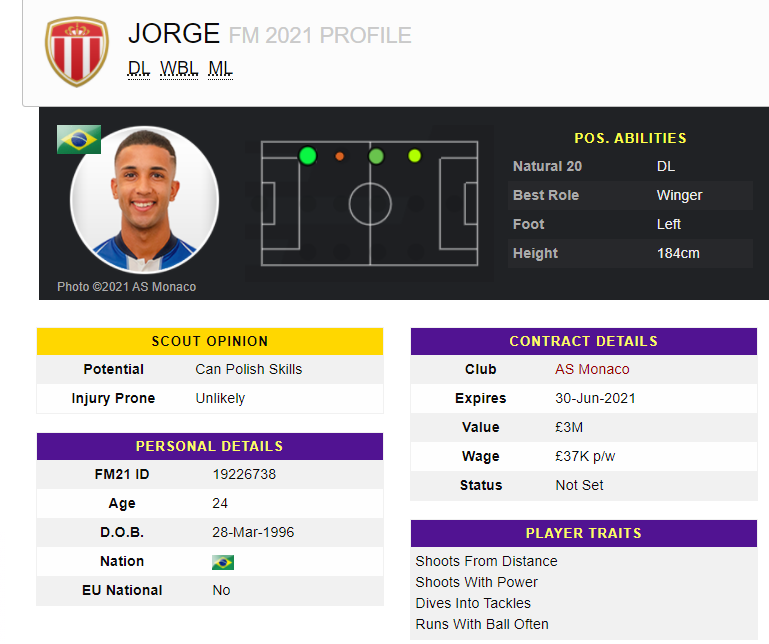 FMBlake
1 year
Loving this story so far mate. You have done really well to reach the cup final and to turn around the poor start to the season. Surely the Gaffer won’t get sacked!
1
Login to Quote 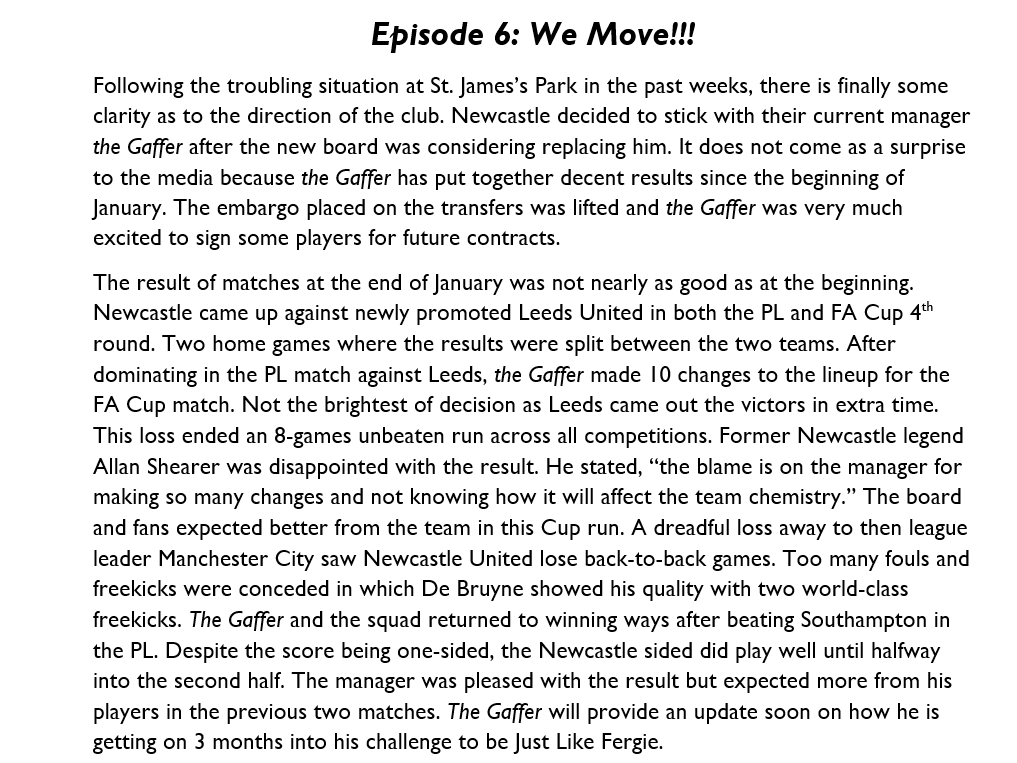 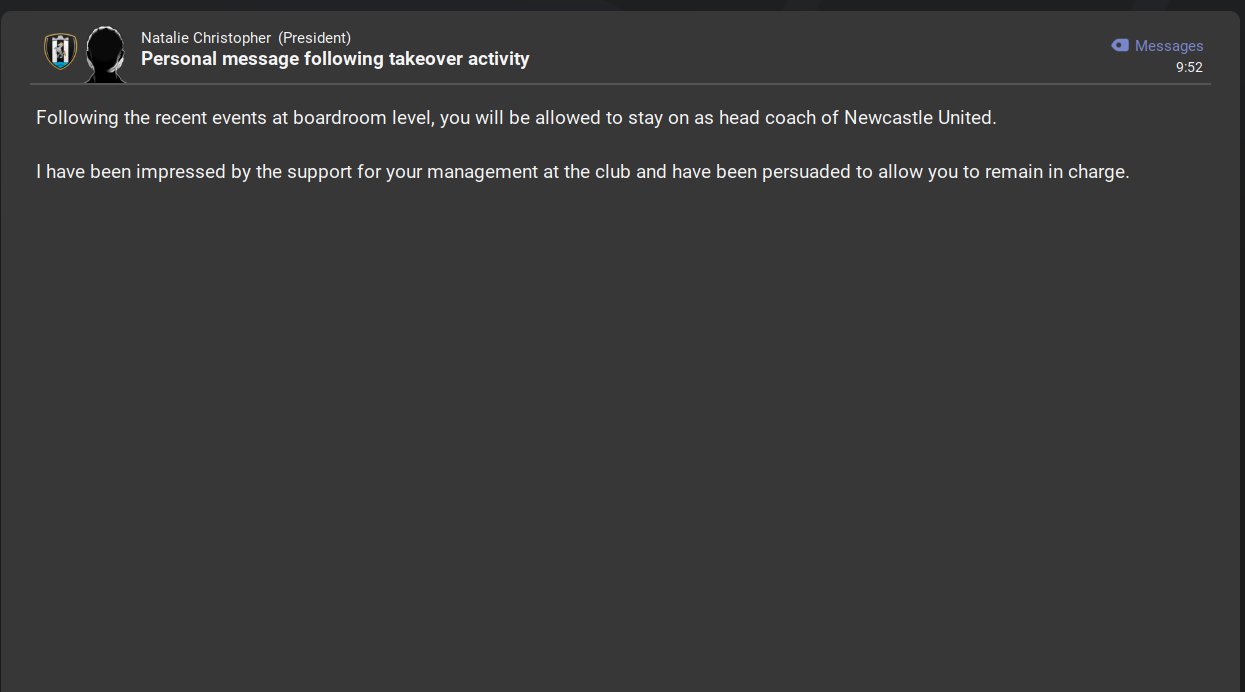 ScottT
1 year
Gaffer out for attempting to get Ashley to stay!
1
Login to Quote 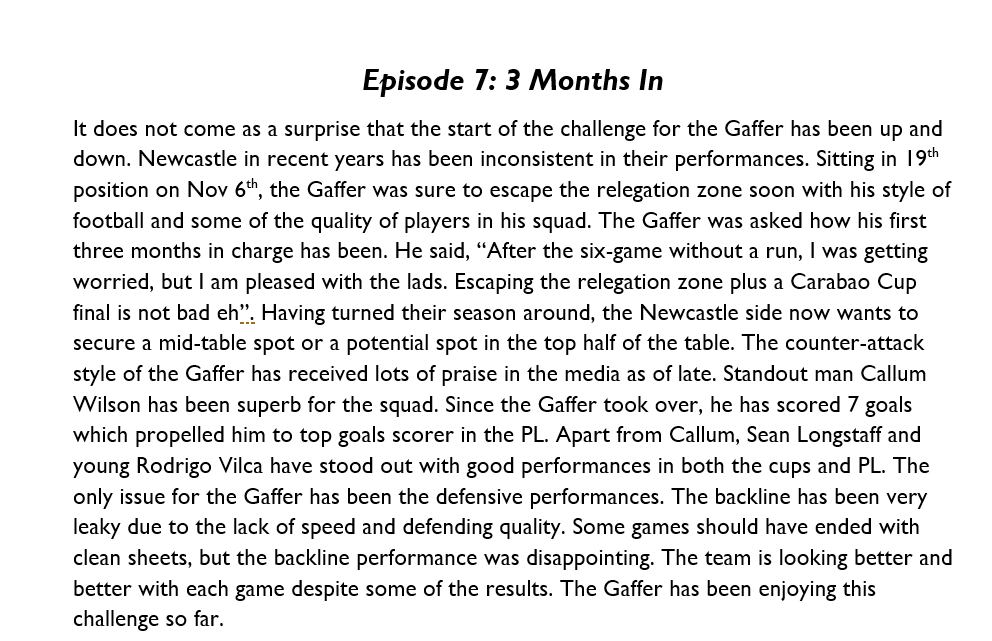 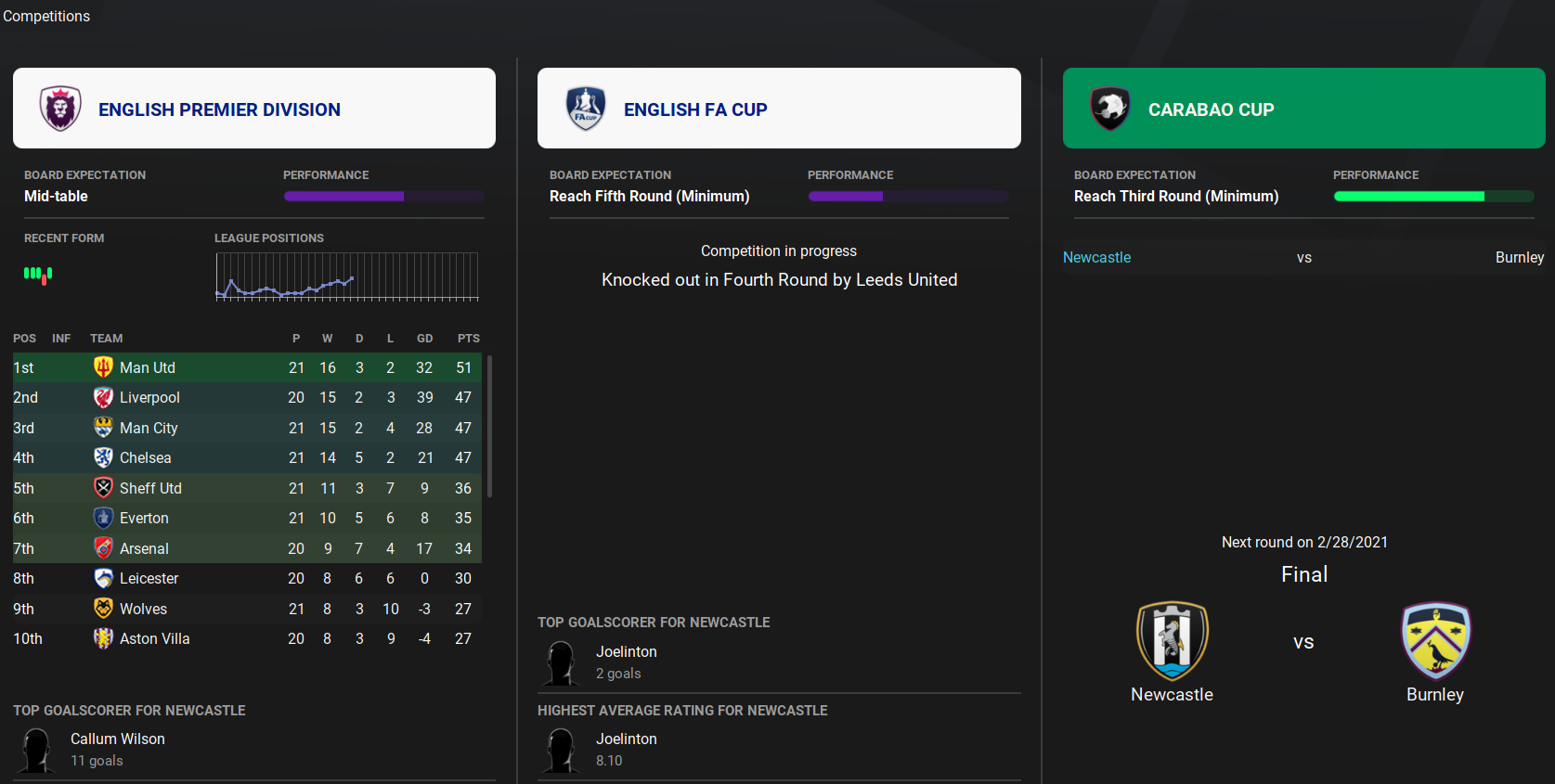 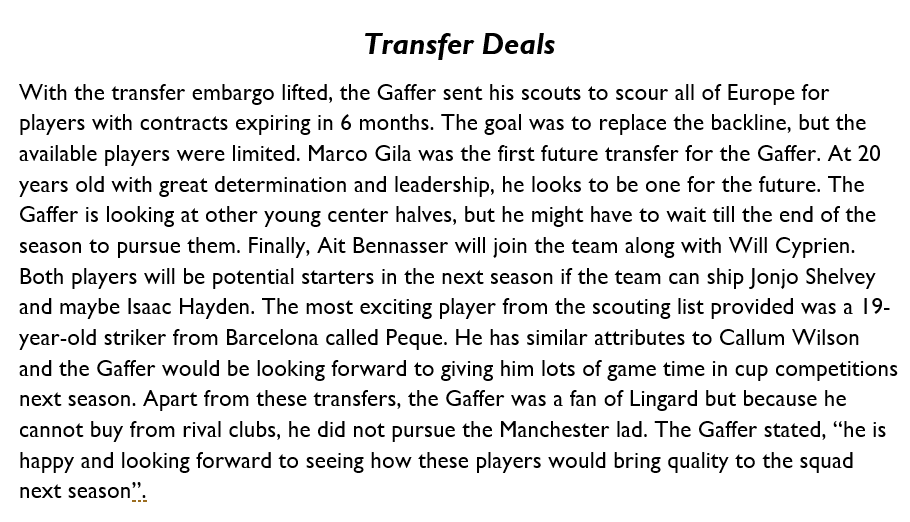 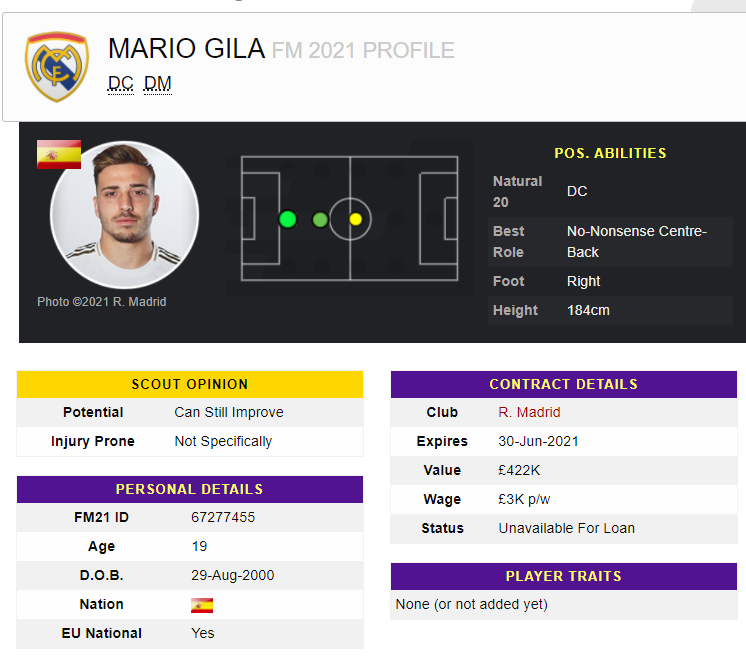 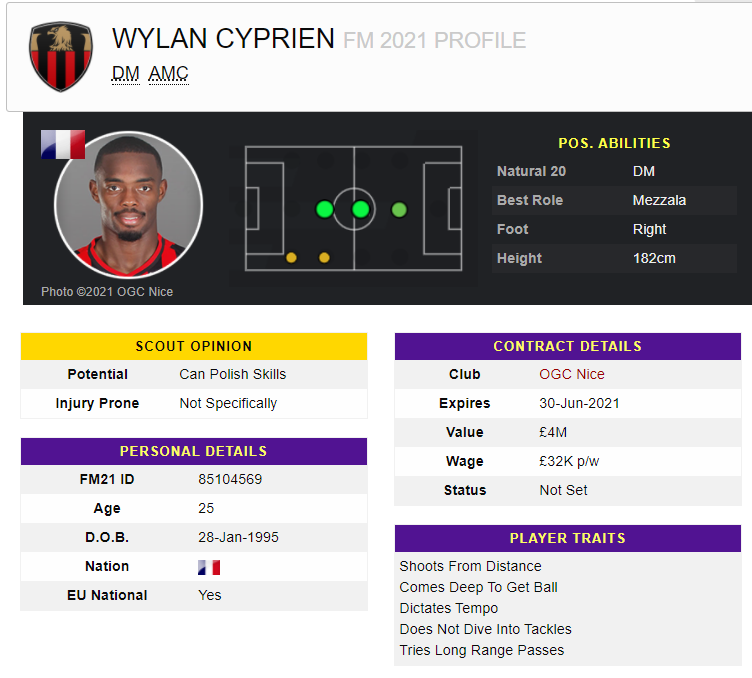 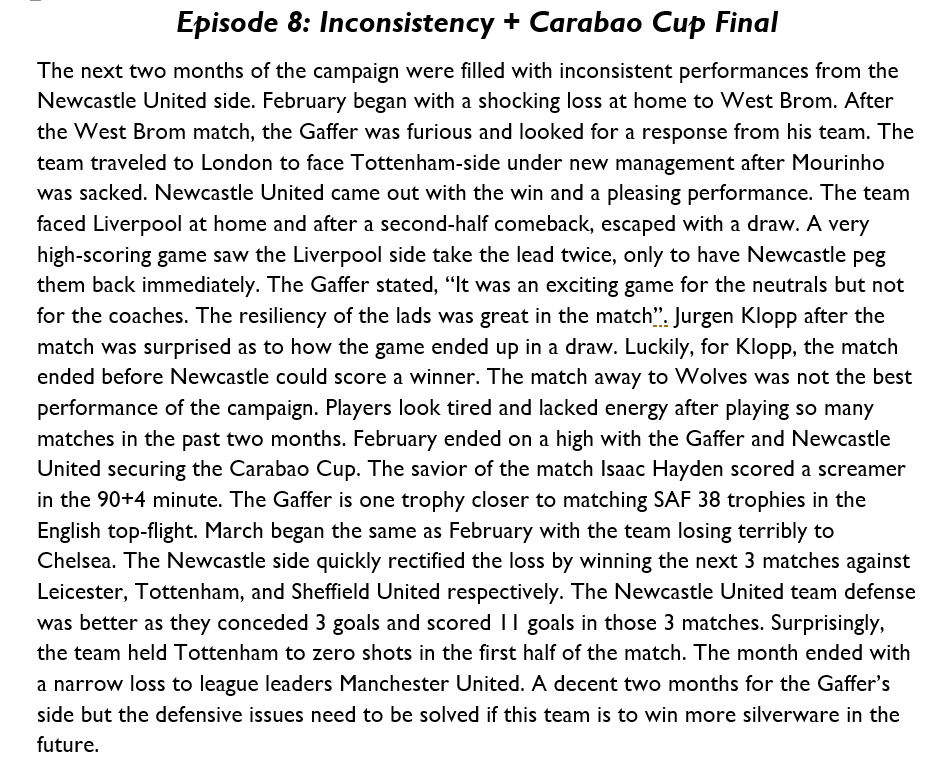 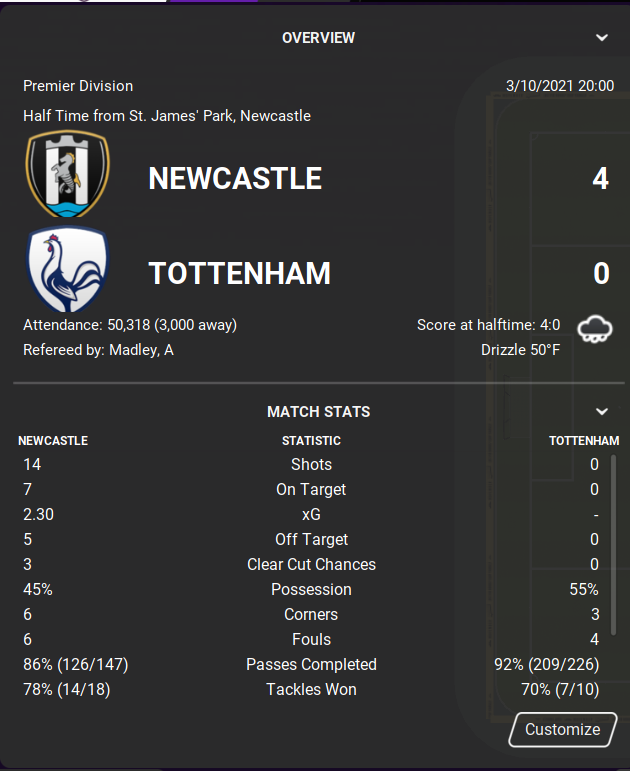 ScottT
1 year
Some excellent results in the mix there but most importantly a Carabao Cup success. Brilliant and congratulations!
1
Login to Quote

LeGaffer
1 year
ScottT: Thank you for the support. Gaffer has changed his mind about Mike Ashley after some thinking. The club should have definitely been sold. 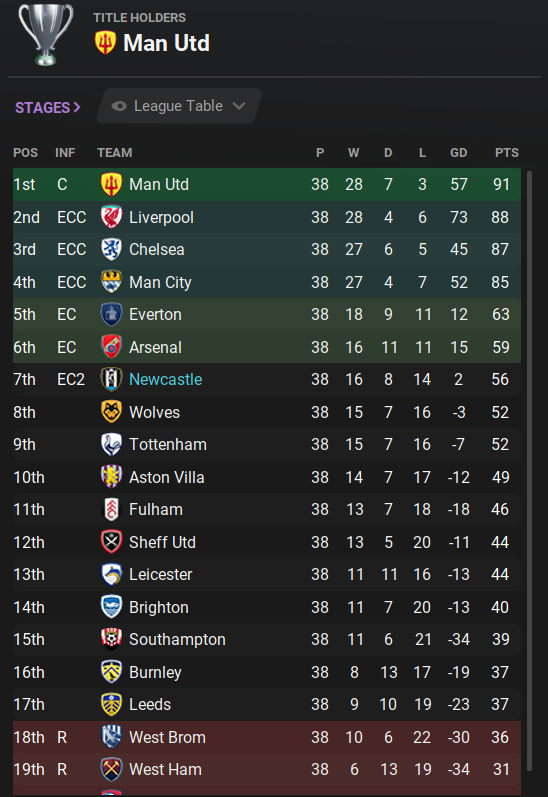 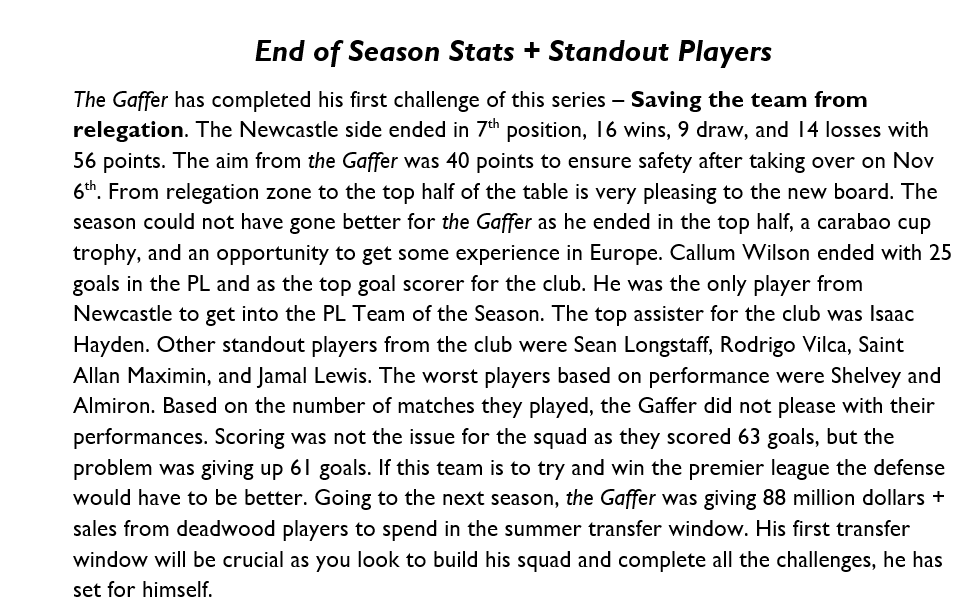 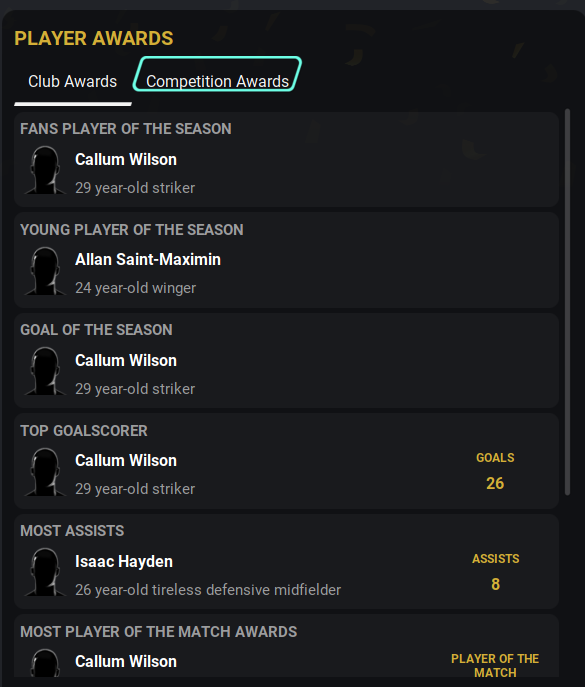 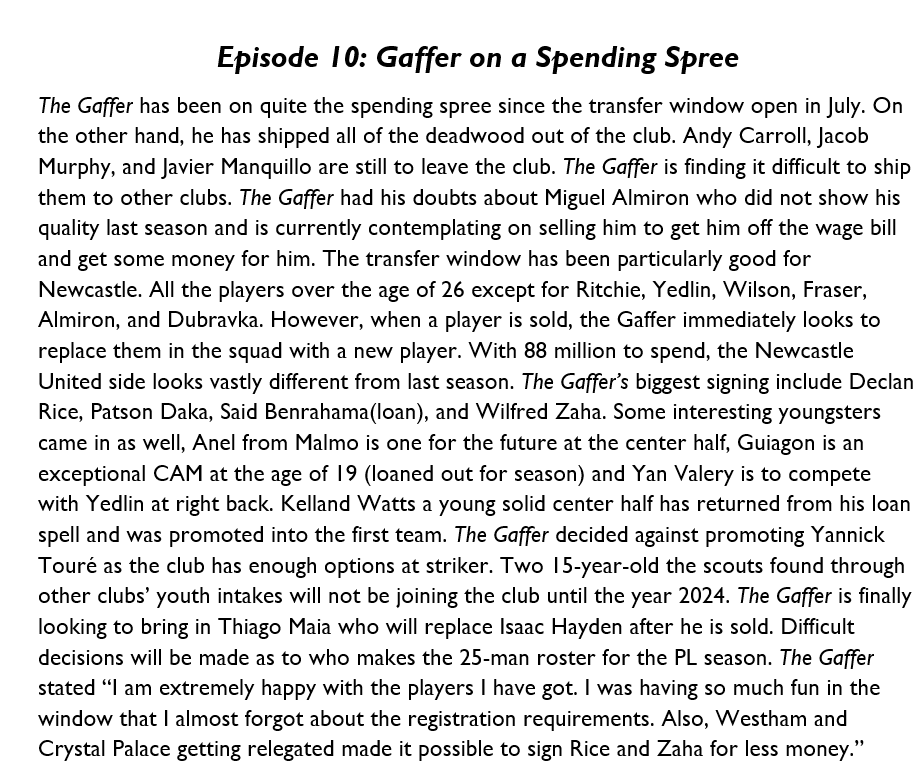 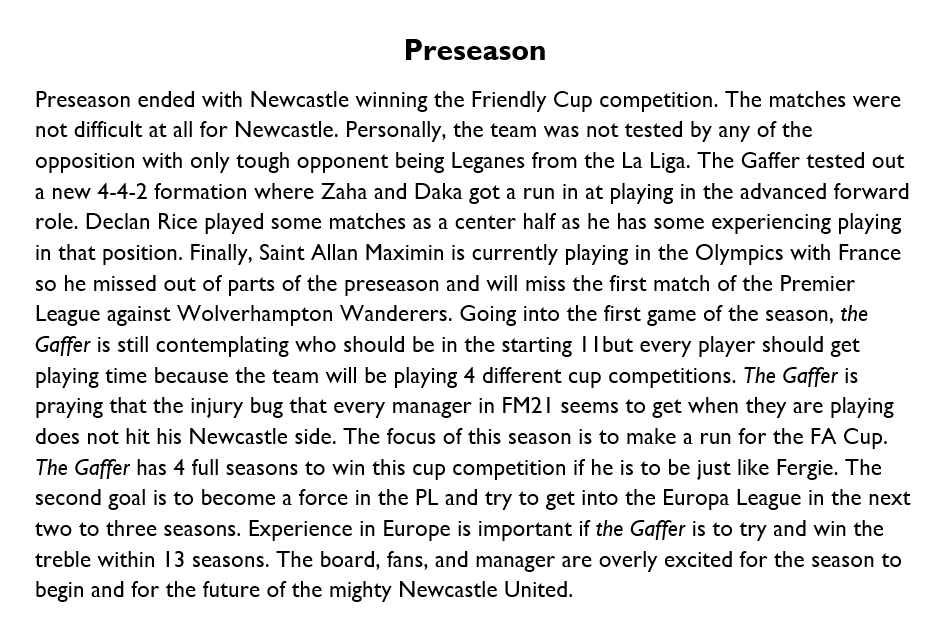 Zidan Iqbal and Arnau Puigmal were signed as free agents as he was released by Man United. Gaffer still following the rules to not do any transfers with direct rivals.

Players still on the transfer market are Lascelles(transfer arranged to Watford). Isaac Hayden, Manquillo, Darlow Murphy, and Andy Caroll (do not want to leave but will be forced out of the club)
Login to Quote

You are reading "The Gaffer Series: Just Like Fergie".