Looking for a save to play on my own for the first time in a while due to solely playing my online save with a friend I went from save to save, old, new and anything inbetween before deciding to resume my Everton season I'd started back in January. I'd made a blistering start to the league and sat top in November but for some reason or another I fell away from it or got bored. I decided to get back to it though as my best ever save on FM was with Everton a couple years ago where I completed 15 seasons or so, making them the best in the world. So that's my aim here, to make Everton the best in the world and what a first season we had towards that goal. 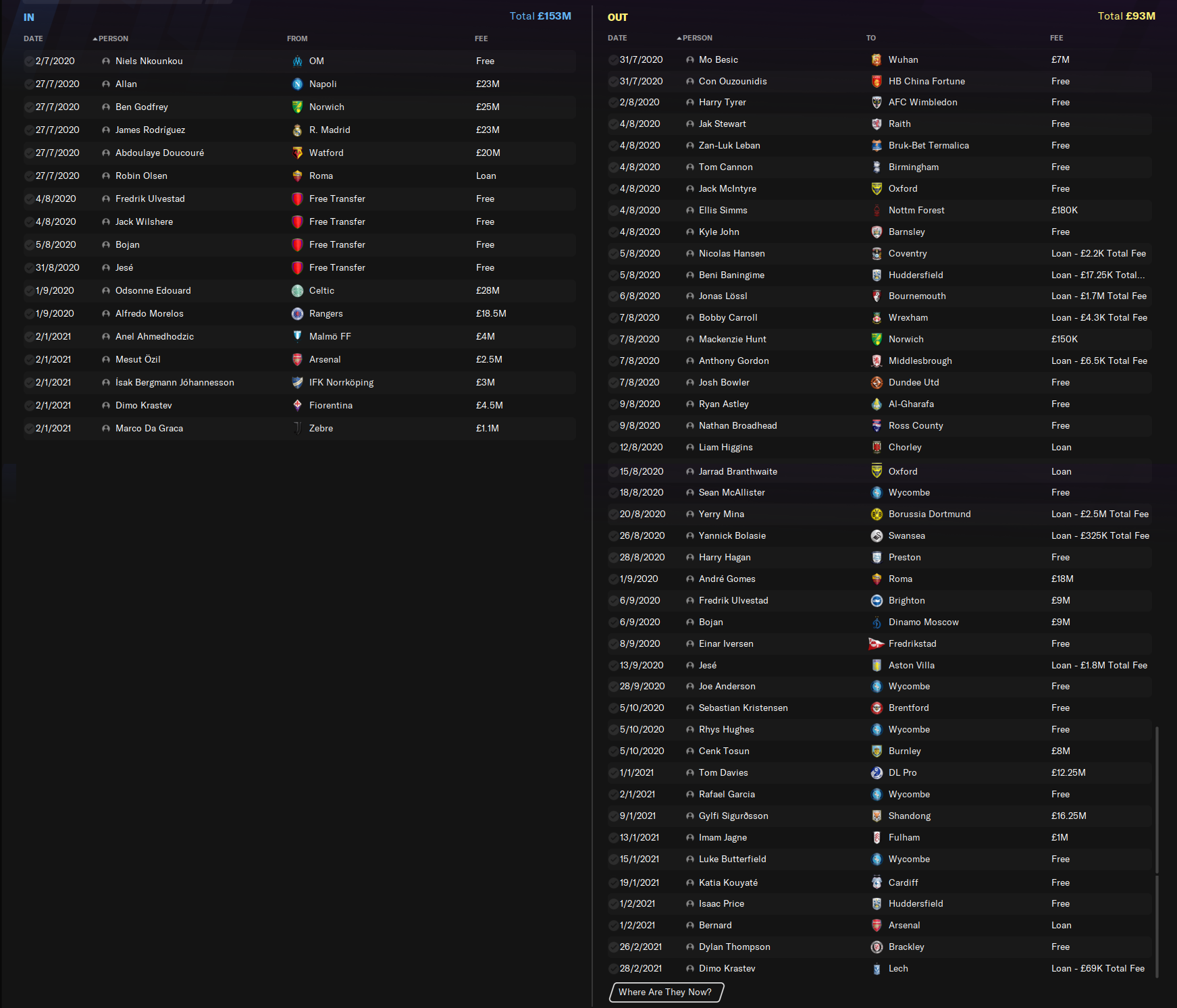 With Everton having already made a few key transfers I didn't go overboard and buy loads more, I brought Edouard in as well as Morelos and made a few free transfer signings with a view to selling those players on for profit. That paid off quicker than expected as I was able to shift Ulvestad and Bojan instantly and made £18m profit, also managed to get a £1.8m loan fee for Jese. I made a couple more moves in January which were a view to the future although, Ahmedhodzic became a starter straight away. Ozil was brought in to see if he could do anything but he didn't amount to much but he was cheap and I can sell him on for some profit in the summer. Throughout the season Besic, Gomes, Tosun, Davies and Sigurdsson were also sold as the fringe players were shifted out slowly but surely.

As expected, Dominic Calvert-Lewin was our best player this season and will be our leading striker for many years as I want to have him as my main man throughout. James Rodriguez was better for me than I expected although I do feel like I'd sell him for a decent price due to his age and physical stats. Lucas Digne was really impressive to and will likely be my first choice LB for many years barring any exceptional bids. Odsonne Edouard really impressed me on the left wing this season too and he actually outshone Richarlison. Speaking of the latter, I'm going to need a much better season from him next year or he will be getting replaced. The defence was particularly impressive as we conceded the least amount of goals, got most clean sheets and even done the other part by scoring most at the other end too. There is an impressive core to the squad here which I want to build around and at the moment that will be Holgate, Godfrey, Ahmedhodzic, Digne and Calvert-Lewin.. Most other players will be sellable for the right fee but Rodriguez, Richarlisson, Allan and Eduoard are also key at the moment. I got a couple players through in the youth intake that could be a staple of this side going forward in the shape of Terry Davies and Omar Cham who have broken a couple youngest ever player/scorer records so far too. 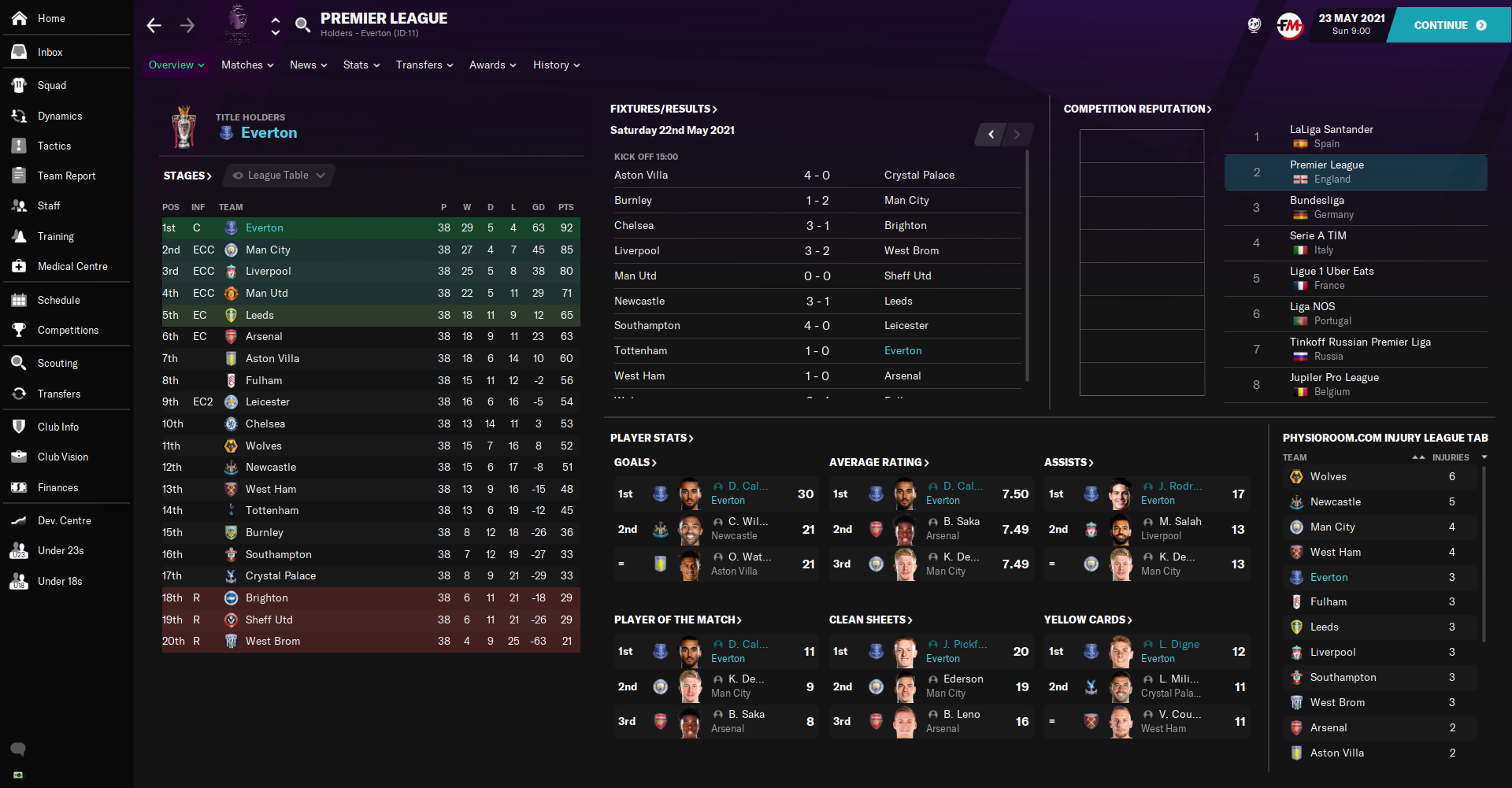 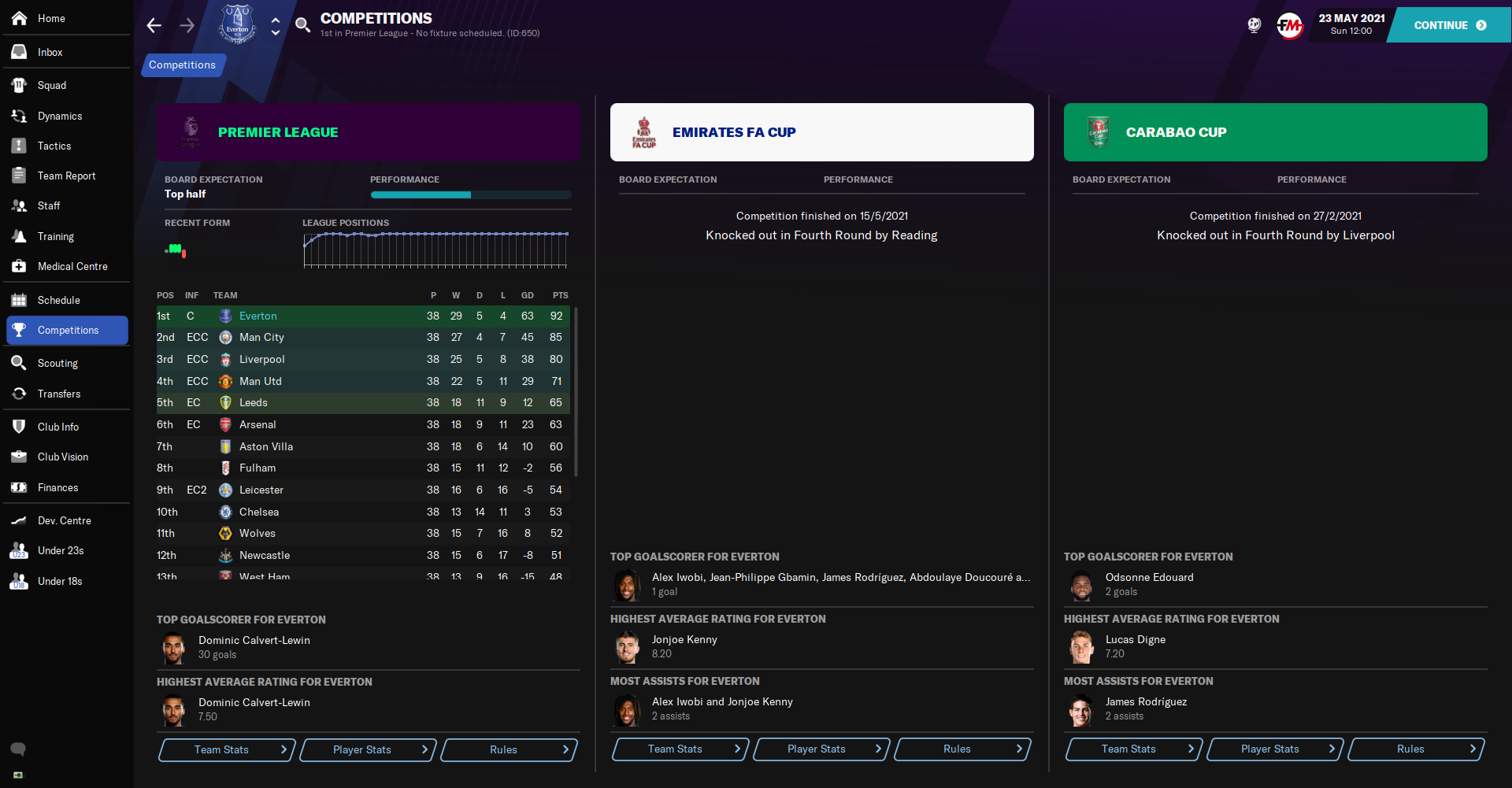 We didn't amount to much in other competitions this season but more than made up for that with a first season unexpected title win. The challenge now is to continue in the same vein of form next season to defend the title but also to progress in the Champions League as well as the two other domestic competitions. My goal for next season would be to finish in CL places, win either of the domestic cups and reach the latter stages of the Champions League. We shall see.
Login to Quote

TheLFCFan
1 month
Not the worst first season then...:D Although the team choice is questionable...good luck for season two, with expectations much higher now!
Login to Quote

Exactly mate! Really shocked I've never pulled off a title win with anyone other than a main team in a top league in the first season before.. When it got to January and I was still top I was going into every game thinking I could afford to lose and it never really seemed to happen! Then near the end I had a couple draws and a loss that made me start to fret about the title. A bit mad really as no individual really carried us it was just a team performance throughout the season I think as well as an uncharacteristically good defence(for me). Really put myself in an impossible position for season 2! I guess a good few cup wins and CL football would suffice for now as another title probably would be hard to achieve. Cheers!
Login to Quote

Justice
1 month
Well that was easy!
Login to Quote

You are reading "Everton".