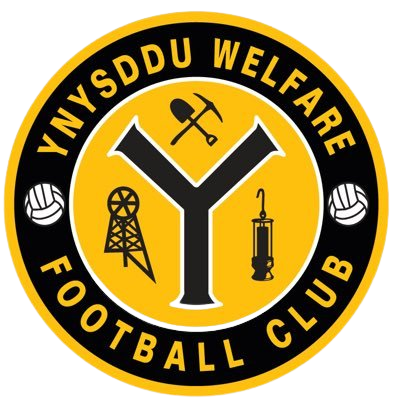 Ynysddu Welfare Football Club
Ynysddu isn't in the database, so I got their coordinates and added the village to the game.
I decided to go deep down the leagues, using a Wales Lower Leagues database I found a team that had a nice badge and a nice name and decided to give it a go.
Ynysddu is a small village and community in the Sirhowy valley of south-east Wales. It is part of the district of Caerphilly within the historic boundaries of Monmouthshire. It lies between to Cwmfelinfach and Wyllie, 4.3 miles (6.9 km) north of the town of Risca and 4 miles (6.4 km) south of the market town of Blackwood. It is about 10 minutes by road from the M4 motorway and 20 minutes from the Second Severn Crossing. The population in 2008 was 2,905, increasing to 3,948 at the 2011 Census. Ynysddu comes from the Welsh descriptive words 'Ynys' ('island' or 'river meadow') and 'ddu' ('black'). 'Black river meadow' is appropriate for the landscape of the area.
After four seasons, I got promoted to the Cymru Premier. We're now a semi-pro club with an average attendance of around 550. Oh, and we're playing at Barry Town's Jenner Park because our stadium doesn't comply with the rules. I'll post something every season, but here is a rundown:

So we're currently at the 2027-28 season. At the end of the current season we're moving to a new 'almost 2000 capacity' (iirc) stadium, and we're playing in Europe for the first time ever. What's pissing me off is that we have some teams in the Cymru North/South leagues that have professional status, we're still semi-pro and the board refuses to turn professional. We can't get proper training and better players without turning professional, but they're still being stubborn and refusing my request. Hope they change their minds...

And with that season done, we have a little more than 5 million in the bank. With that, the board finally accepted to turn the club professional!
Login to Quote

2029-2030:
JD Cymru Premier: We couldn't retain our titles and finished 2nd, so we're playing Conference League next season.
JD Welsh Cup: We defeated South Gower and Prestatyn Town before being knocked out by Rhyl in the 4th Round.
Nathaniel MG Cup: Knocked out by Knighton in the 3rd Round. This team is starting to piss me off...
UEFA Champions League: We got past FCSB and FC Inter Turku before getting defeated by Rangers 6-4 on aggregrate in the Champions Path 3rd Qualifying Round.
UEFA Europa League: We got a hard draw against Lech Poznan. We drew 3-3 at home before being defeated 1-2 away. So group stages of Conference League here we go.
UEFA Europa Conference League: We were draw in a group with the likes of Qarabag, Sturm Graz and Slavia Prague. 4 wins, 1 draw and a single loss later and we finished top of the group. In the 2nd Knockout Round (got a bye in the 1st Round, guess it was because we were top of our group?) we got another scottish opponent, this time it was Celtic. We got a very credible 1-1 draw away, but we couldn't keep that at home and Celtic beat us 2-0 with Furuhashi and Maeda scoring.
Ticket Holders: 106
Average Attendance: 3,697

So basically... last season we won a domestic treble, while this season we didn't win anything. I will blame the transition to professional for that heh. I agreed some pre-deals in January and will take a look at the market, so let's hope we can change our fortunes back to the previous season.
Login to Quote

You are reading "Yr Ystorm - A Welsh Adventure".