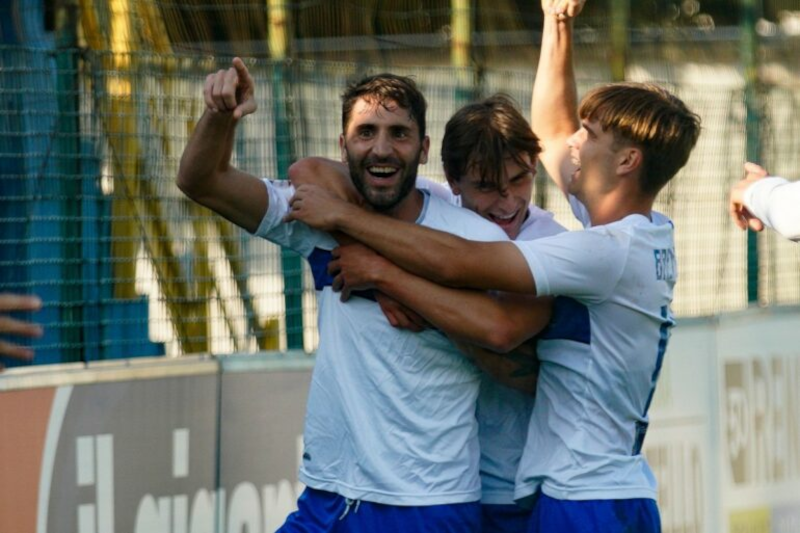 De Luca’s reign as Pro Sesto’s new manager got off to a bad start when the opponents Pro Patria scored within the first two minutes thanks to a close range shot from Davide Castelli.

However, experienced striker Riccardo Capogna wasted no time in levelling the scores just one minute later, seizing on a crucial mistake by Lorenzo Saporetti to equalise against Del Favero.

It was only in the 25th minute when Riccardo Capogna scored what turned out to be the winning goal with a placed shot into the bottom right corner of Pro Patria’s net.

Things went from bad to worse for the visitors at Stade Breda when Pro Patria’s striker Mohamed Amine Chakir was given a straight red for a bad tackle on new signing Amadou Diambo.

Post-game medical reports have since ruled out the Ghanaian midfielder for over two months with a leg injury following the tackle, just four weeks after becoming Giovanni De Luca’s first and only signing for the club.

Speaking after the game, De Luca spoke to the press: “I thought that we were very impressive. We worked hard all preseason to get to a stage where we were fairly comfortable with what our game plan is and although we took an early hit with their goal, we brought it back and held out very well.

“I’m very happy for Riccardo as I know with any striker, it’s a great feeling to get off the mark for the season so early and hopefully we can see more of the same all through this campaign.”

Speaking of Diambo’s injury, De Luca continued: “We are absolutely devastated that Amadou will be out of action so soon after joining us. He has been great in preseason and in training and he is a huge loss. We look forward to him coming back but we will have to make some changes to compensate for the loss in midfield.”

Pro Sesto took 1st place in Serie C Girone A as they were the first team in the league to start the new season, with all remaining 18 teams to play tomorrow.
James: It was generally good to get a warmup in preseason against some clearly competitive sides. As for signings, I think you might be out of luck if you're wanting anymore 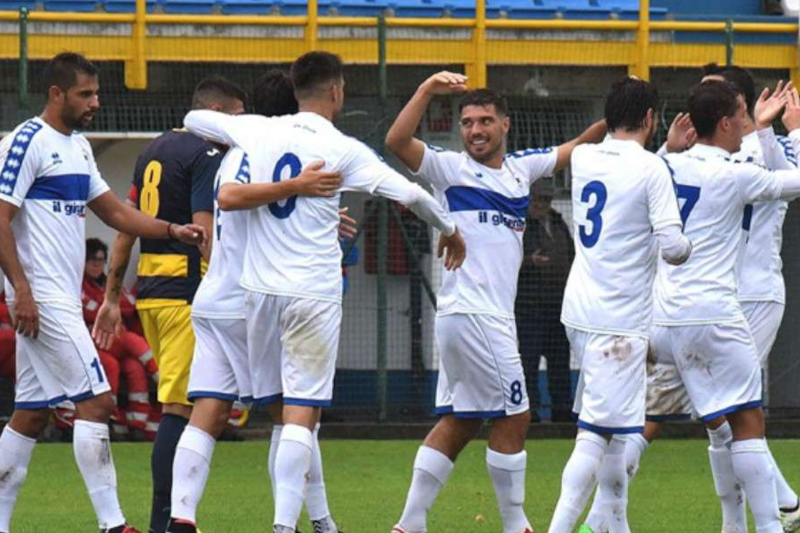 Pro Sesto have solidified their place at the top of Serie C with a 2-1 away win against AlbinoLeffe.

The game started badly for Pro Sesto, with midfielder Tommaso Gattoni forced off inside 10 minutes with a twisted ankle following an attempt to sprint for the ball.

The bad news was compounded by an opening goal scored by AlbinoLeffe’s Michael Brentan with a header from Luca Milesi in the 22nd minute.

With AlbinoLeffe heading towards the half-time break leading by a goal, Riccardo Capogna was brought down in the box by Mirko Saltarelli as the referee gave the penalty.
Capogna stepped up to take it after winning the spot kick and converted classily with a top corner strike on the 44 minute mark.

On the hour mark, Capogna found himself with another chance - this time on the edge of the box - and rifled in a low drive into the bottom left corner past the flailing arms of Andrea Pagno.

The goal was Capogna’s 14th league goal in just 9 games, capping off a sensational start to the season for the 34-year-old and for Pro Sesto who moved up to the top spot thanks to the three points gained against the home team, who fell down into 18th place after the 2-1 defeat.

“I admit, I didn’t see us performing this well and being where we are currently. Not at this stage, not even this season to be honest.” said an honest Giovanni De Luca.

“We know that there are teams of better quality in this division, with better individuals and better financial power. However, this squad has bought into what I am trying to implement and you can see how that translates onto the field, like today.”

Doubts about Pro Sesto’s sustainability at the top end of the table started at the beginning of this month after throwing away a lead to lose 4-3 at home against Vicenza.

Pro Sesto entered the Coppa Italia Lega Pro the following game and were on the end of a 4-1 thrashing at the hands of Arzignano who currently sit bottom of Pro Sesto’s division on 6 points.

However, fortunes were quickly turned around in their third game of October as Riccardo Capogna’s second hat-trick of the season turned two losing positions against Trento into an extremely important win. From there, Biancocelesti have won three in a row after today’s 2-1 win. 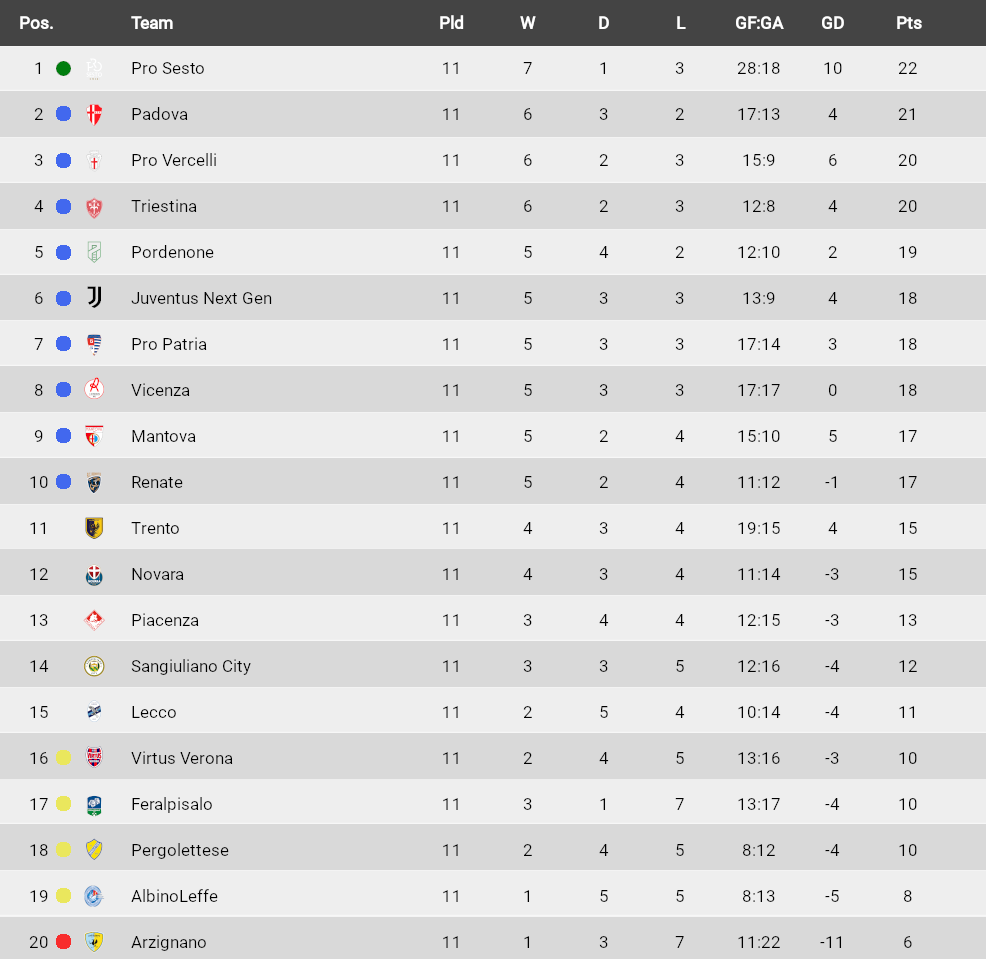 What a start for Gio! It's quite tight at the top of the table, and it's a real shame to have lost Diambo to injury so soon after his arrival. The team's recovered from that disappointment, and have done an admirable job during his absence.

I absolutely LOVE that both Vicenza and Piacenza are in your league btw, in the first editions of FM that I bought (FM07 and FM08) they used to have some gems that were 'must haves' and could be bought on the cheap.
Login to Quote 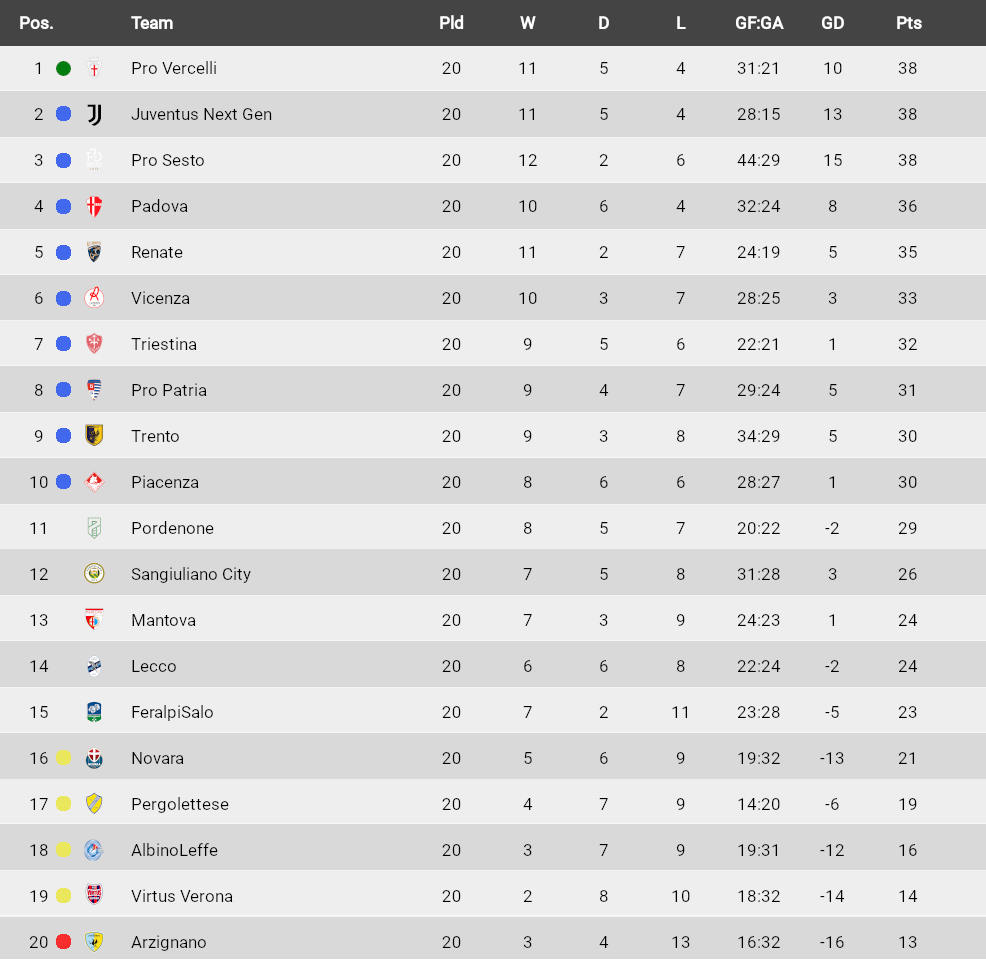 James: Riccardo is dragging the team behind him at the moment! It's a shame he's so old as I'd love to have him for years to come the way he's playing. It's surprising how many familiar teams there are across all Serie C teams tbh, I'm not sure what brings about such demises in Italian football, but there we go.
Login to Quote 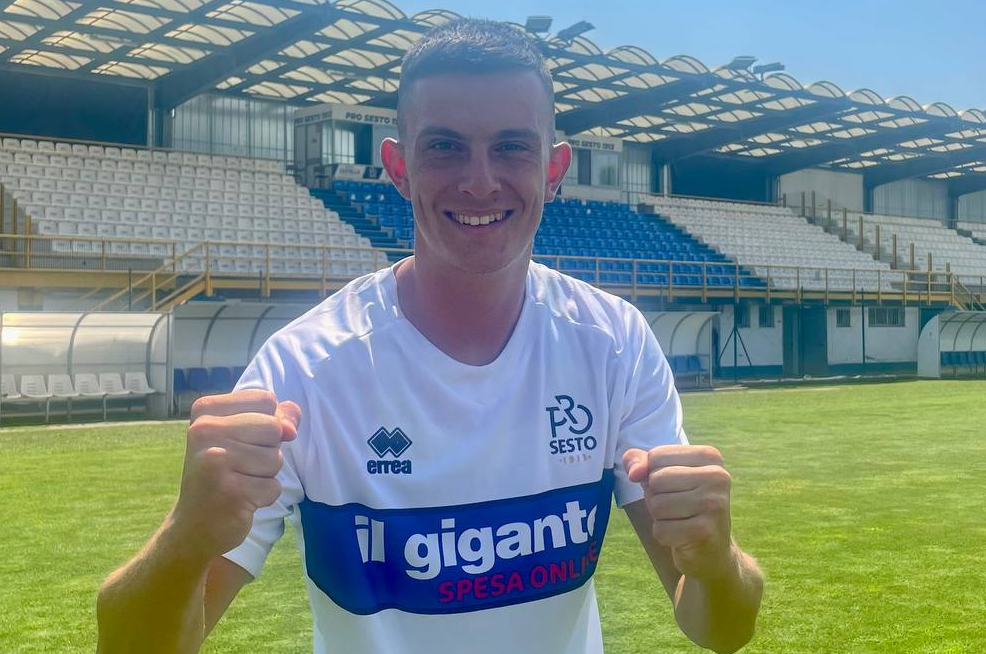 Maurizii, 21, has been a key part of Giovanni De Luca’s squad this season, making 18 appearances at left-back and assisting with goals twice so far.

Alessandro Sala, also 21 years old, has made the same amount of appearances as Maurizii in the centre of midfield, scoring 4 goals and assisting 1 goal.

Both players’ contracts were running out at the end of the current season but they have both received new contract extensions expiring in June 2025, with small wage increases for both players too.

As it stands, 30 players on Pro Sesto’s books will be out of contract at the end of this season, meaning manager De Luca may have to extend more players’ stays at Stade Breda or face a near-complete overhaul of his playing squad for next season.

Despite the opening of the January window, it is unlikely that Pro Sesto will look to bring in any new faces due to the financial pressures the club currently faces.

However, it can be justified to keep the same squad that has overperformed so far this season in Serie C, sitting in 3rd place just after the midway stage of the Italian season. 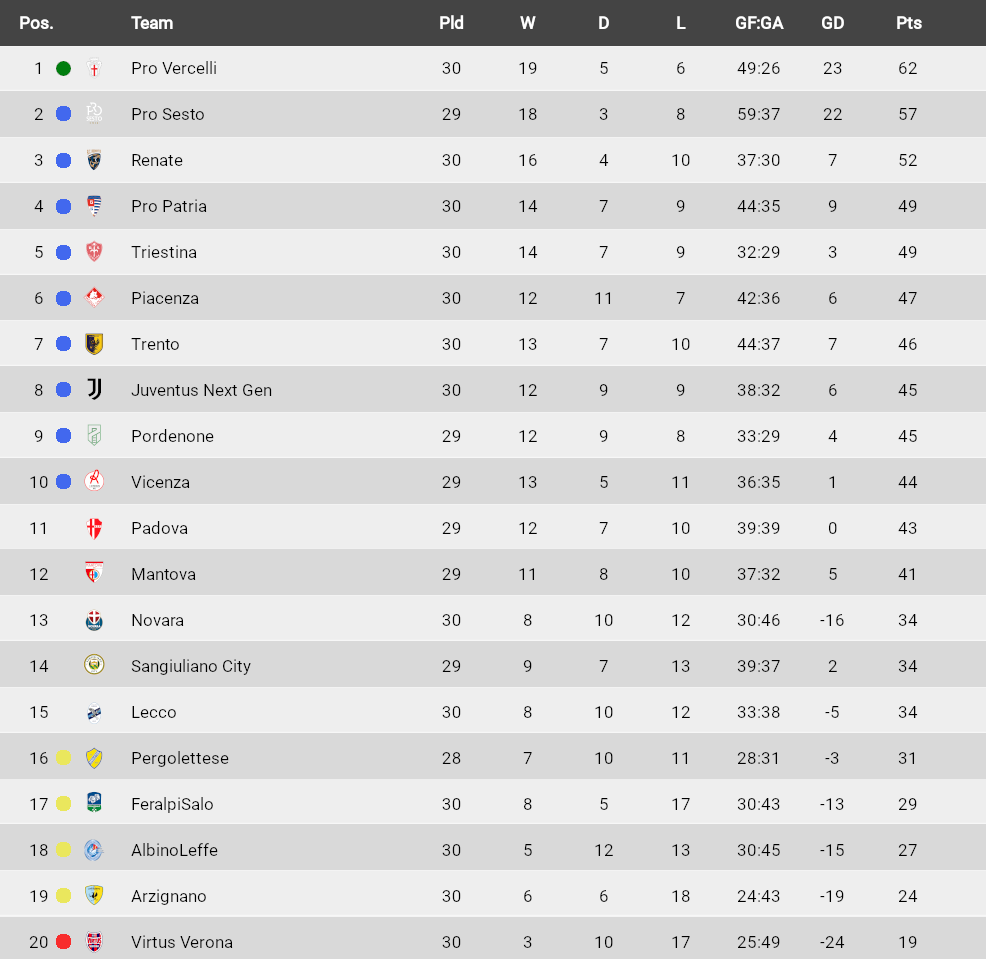 Feliks
8 hours
This is a fantastic layout, and your season is building nicely.
Login to Quote

TheLFCFan
6 hours
Glad to see you're back writing. Gio has certainly had some introduction to the coaching/managerial world! Working under a man like Di Canio will prepare you one way or another for sure!
Been a very impressive first season it has to be said, with expectations being smashed. If my Maths is correct, its still technically in your hands with the game in hand and a match still to play against Pro Vercelli. I am surprised to see Juve struggle so much. Good luck with the run in.
Login to Quote 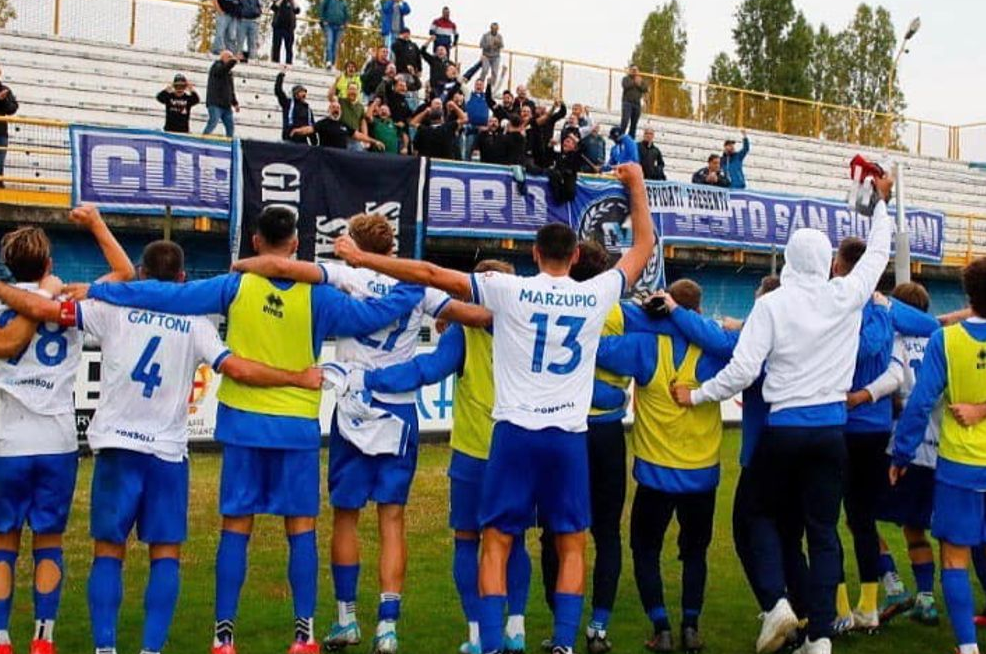 Giovanni De Luca’s side were predicted to be amongst the relegation candidates before the season began, but his team have proven all of the doubters wrong with a fantastic showing this year, with the new manager making only one signing all season.

Pro Vercelli went 2-0 up within the first 20 minutes of the game at Stade Breda through goals by Coli Saco and Pietro Endemini.

However, De Luca’s men went on a goal rampage before the half-time whistle, with goals from Suagher, Bruschi, Diambo and D’Amico making it 4-2 before the break.

Leonardo Gatto was able to score a late consolation, but the game ended with celebrations in both home and away sections - Pro Vercelli celebrating the league title victory that will see them play in Serie B next season and Pro Sesto defying the odds to finish in a later phase of the Promotion Play-Off spots.

Riccardo Capogna has been the highlight of Pro Sesto’s season, with the 35-year-old veteran netting 32 goals in 32 games in the league.

“It’s been a fantastic season and I’m proud of our squad. They have all been incredible professionals and talents on the field and we are looking forward to seeing what we can do in the Play-Offs.” Giovanni De Luca said in the post-match interview following the Pro Vercelli victory.

The Third Round draw for the Serie C Play-Offs will take place on the 29th April, which is when Pro Sesto will find out their opponents.
Feliks: Thanks mate

I think it got slightly out of our grasp, Pro Vercelli proving to be too good.
Login to Quote 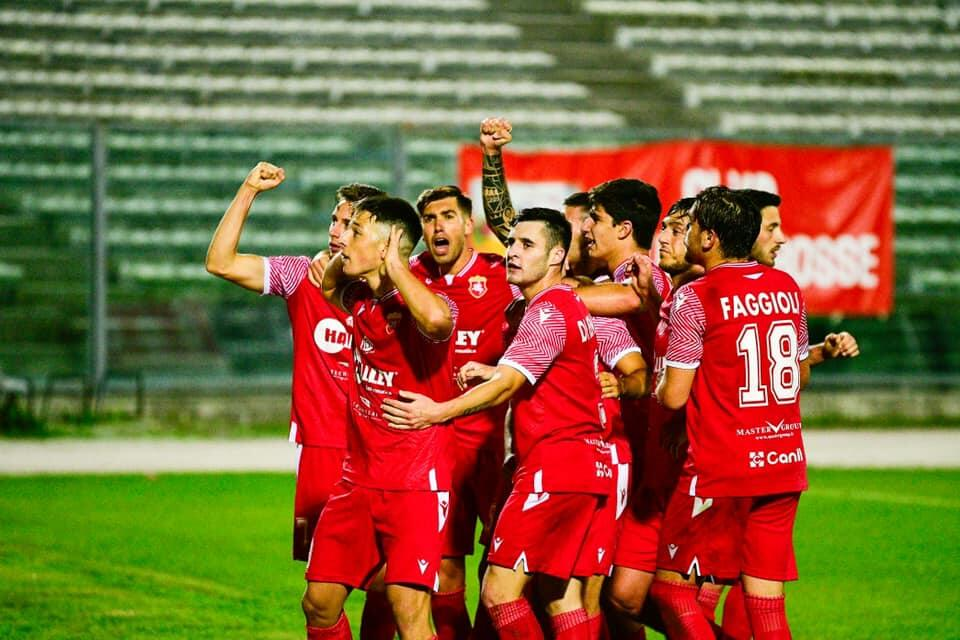 Following U.S. Ancona’s win over Rimini Calcio in the Serie C Play-Off Second Round, they will face Giovanni De Luca’s Pro Sesto in the Third Round.

Ancona, managed by Gianluca Colavitto, finished in 5th place in Serie C/B so entered the Promotion Play-Offs at the First Round against Fermana and failed to beat them, only qualifying as they were the higher seed in the division.

Yesterday evening, they faced Rimini - who finished only one place ahead of previous opponents Fermana - and also failed to beat them in a scoreless draw and so once again, Ancona qualified for the Third Round on the basis of their league position after 38 matches.

This leaves Ancona unbeaten in three but simultaneously, Colavitto’s men are without a win in five games. On the other hand, Pro Sesto are unbeaten in three, with their last match a 4-3 win over league champions Pro Vercelli.

The draws for all of the following rounds after the Third have been made, announcing that if Pro Sesto were to come out as winners against Ancona, they would face either Cesena or Siena in the Quarter-Final.

If they succeed in the Quarter-Final, they face a Semi-Final against one of Monterosi, Cerignola, Juve Stabia or Avellino 1912.

And finally, if Pro Sesto were to make it to the Play-Off Final, they might face one of their Serie C/A rivals in Trento, Renate or Pro Patria as well as the likes of Foggia, Lucchese Libertas or Catanzaro.

The first leg of the Third Round tie will be played at Del Conero on Saturday before returning to Pro Sesto’s home arena of Stade Breda the following Tuesday for the second leg.

You are reading "Giovanni De Luca: The Lost Prodigy".