Ez Ponce
2 months
After many years of playing FM, I decided to start something new. Almost all my previous challenges were identical. Take control of an underdog team, sign some good, young players, win the league, maybe a couple of European cups and that's it. 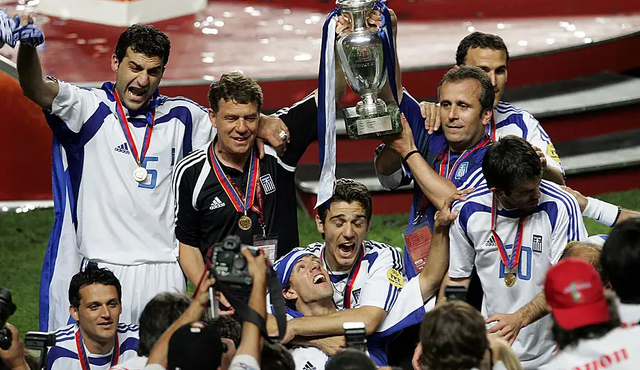 This time I will try something new. I will try to "copy" the career of a great retired manager, Otto Rehhagel.
For those you don't know, he's a German former manager and player.

As a Greek football fan I have huge respect for him like all of us. Well, you know for our great achievement for winning Euro 2004 in Portugal.

Rehagel is one of only two people who, as player and manager combined, has participated in over 1,000 Bundesliga matches (the other being Jupp Heynckes). In the Bundesliga, he holds the records for the most victories (387), most draws (205), most losses (228), and his teams have scored the most goals (1,473) and conceded more (1,142) than any other. He served as the trainer of Werder Bremen between 1981 and 1995 and won twice the Bundesliga and in 1992 the UEFA Cup Winners' Cup with them. After a rather unsuccessful intermezzo at Bayern Munich, he won the Bundesliga sensationally with the promoted team 1. FC Kaiserslautern.

Internationally, Rehhagel coached the Greece national team from 2001 to 2010 in the their most successful footballing era – during that period, the Greece won the 2004 European Championship unexpectedly and qualified for the 2010 World Cup, their second World Cup finals appearance. A 2022 critically acclaimed film entitled, King Otto, was made on Otto Rehhagel's triumph with the Greece national team for the 2004 European Championships.

Coaching style
Rehhagel popularized the phrase kontrollierte Offensive (controlled offence). He prefers a grass-roots approach to football, stressing the importance of at least two (often also three) big, strong headers in central defence. His defensive schemes often use a dominant libero, such as Rune Bratseth, Miroslav Kadlec, or Traianos Dellas. In defence, Rehhagel usually prefers robustness and height over footballing abilities (the most notorious example being Ulrich Borowka). In the period of all-round, fluid defence, many have criticized this as dated and anachronistic, but Rehhagel replied that his success makes him right.

Rehhagel's teams regularly develop pressure on the wings complemented with at least one dominant header as the central striker. Examples include Mario Basler/Marco Bode playing on the wings at Bremen or Andreas Buck/Marco Reich at Kaiserslautern while (Rudi Völler, Karl-Heinz Riedle, Frank Neubarth, Olaf Marschall, and Angelos Charisteas) at the top of the formation.

The backbone of his teams are usually older, more experienced players while younger talents rarely find themselves taking responsibility. At Kaiserslautern, Rehhagel often kept the young Michael Ballack on the bench as a substitute. Despite this, he is also known for being an excellent talent scout, having discovered Völler, Riedle, Marco Bode, Dieter Eilts, Marco Reich, Miroslav Klose, Angelos Charisteas, Sotiris Kyrgiakos, Theofanis Gekas and many others.

With Greece he used man-marking, which was an unusual tactical throwback at the time, meaning their opponents were unprepared to combat it.

Rehhagel is also known for being a good motivator. His teams possess a lot of team spirit, most famously the Greece national team, which he turned from a dead-end squad nobody wanted to play for into a must-be-there-at-all-costs team. He is also famous for reigniting the careers of older players, such as Manfred Burgsmüller, Mirko Votava, Olaf Marschall or Theodoros Zagorakis.

Rehhagel is also a deft and ruthless club politician. He is notorious for restructuring clubs by making friends with powerful people and using them to eliminate the opposition in order to wield absolute power, preferring the system of a benign dictatorship. His way of handling a club – in a competent and innovative, but also highly patronizing and condescending way – has been immortalized as ottocracy, a pun on his name alluding to the style of management/government; autocracy.

Finally, Rehhagel is considered somewhat of a maverick in Germany. In decades of interviews, he has established a reputation for being eccentric, arrogant and unwilling to admit mistakes, similar to e.g. José Mourinho and Brian Clough. However, seeing his impressive record, he is apparently able to back up his words. 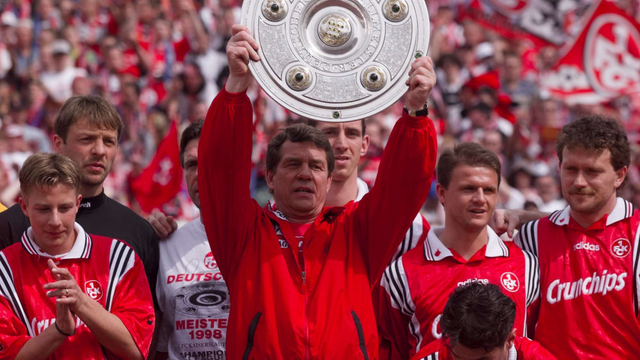 I will skip the first one, because I can't play with this specific club and I didn't find any good info as well.

So, we start at 1. FC Saarbrücken. Perfect. A playable club.
Right now they are 3. Liga (3rd tier) club. 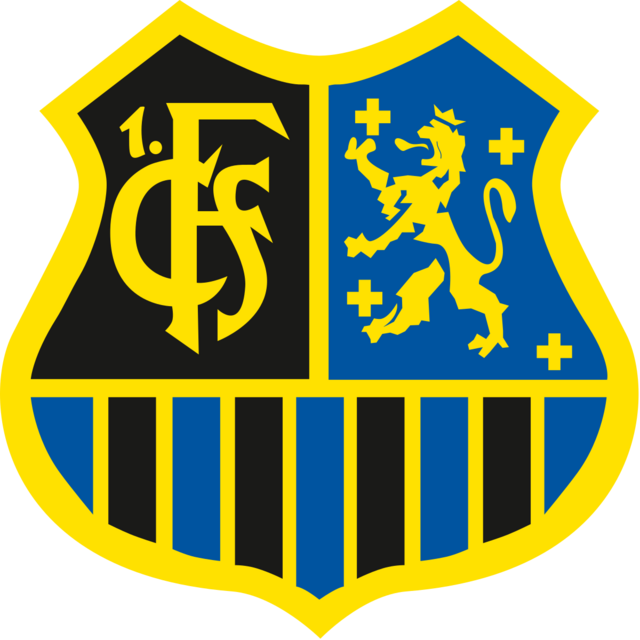 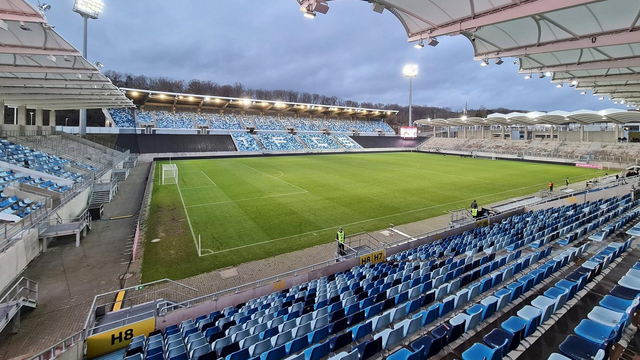 About the challenge:
My main goal is to stay at Saarbrücken at least two seasons (one tier below compared to 1972) and then move to a Bundesliga side. I know it would be extremely difficult to keep the same path as him, so I have to mention now to you that if a club is not there as playable at the same category (like Kickers Offenbach right now, they are in 4th tier, I am forced to choose or wait for another club with similar reputation).

I think these settings are fair enough.

Thanks for your time.
Login to Quote

J_ames
2 months
Would be quite awesome if you could replicate Otto's career club-for-club, but I agree that it could be difficult at the same time. It's an interesting challenge that you've set for yourself, and I look forward to seeing how you attempt to complete it. 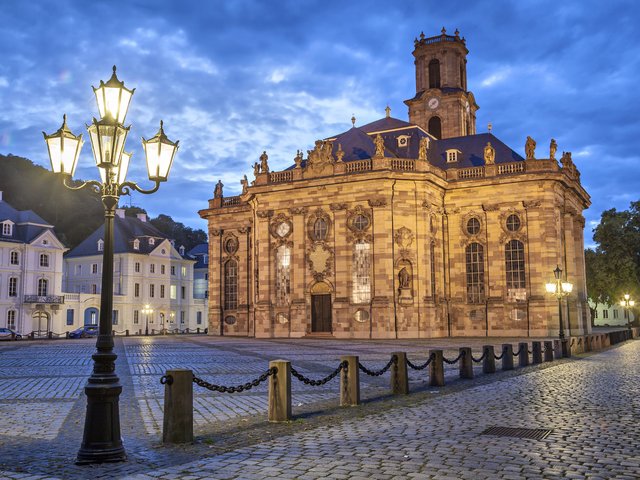 Μy first task as a new manager at 1. FC Saarbrücken was to study all the players, their positions and attributes. After that, in the next months I created some tactics I followed during the season. 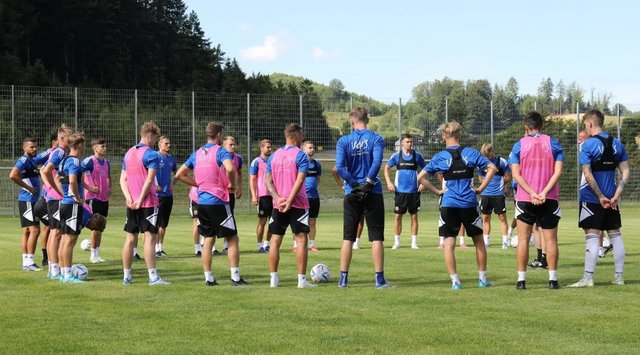 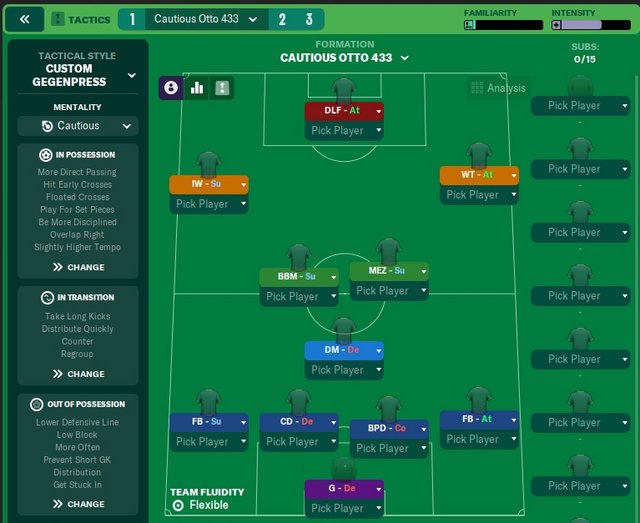 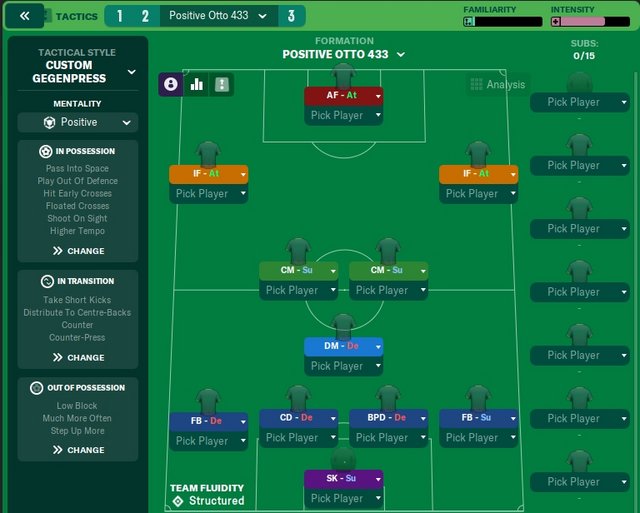 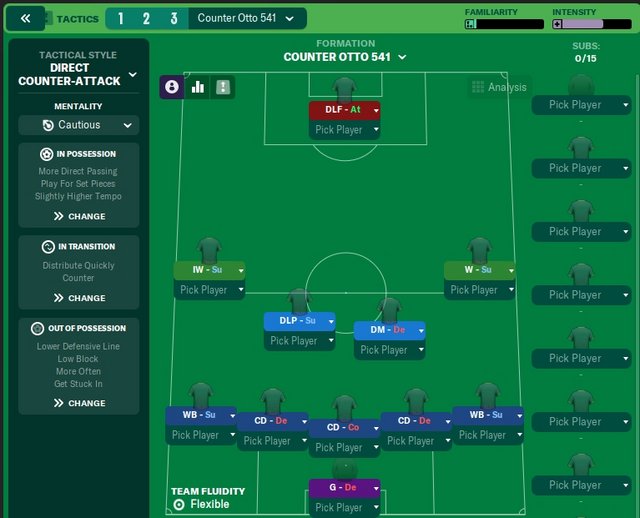 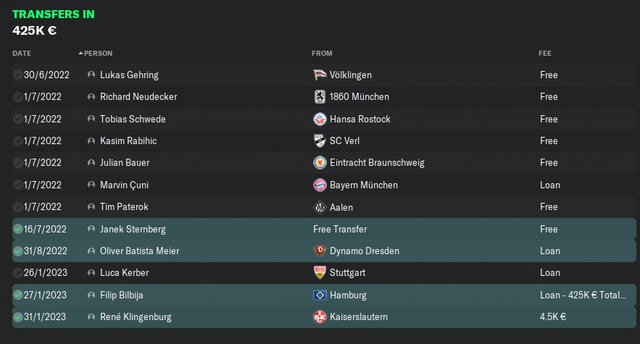 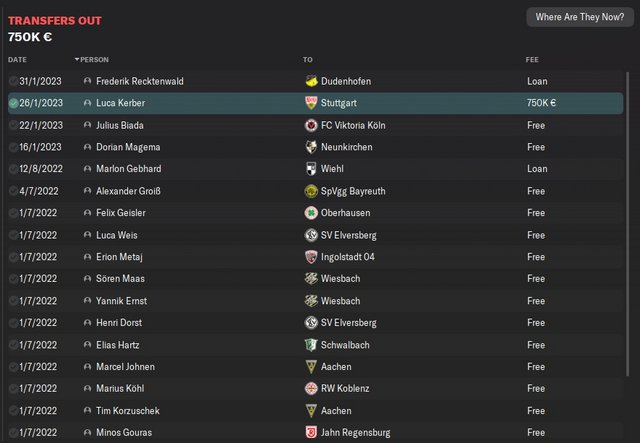 I spent a lot for Bilbija to have him 18months as a loan, I have faith in him.

Unfortunately I had to sell my best talent..
750k I think it's decent money though for 3rd tier in Germany 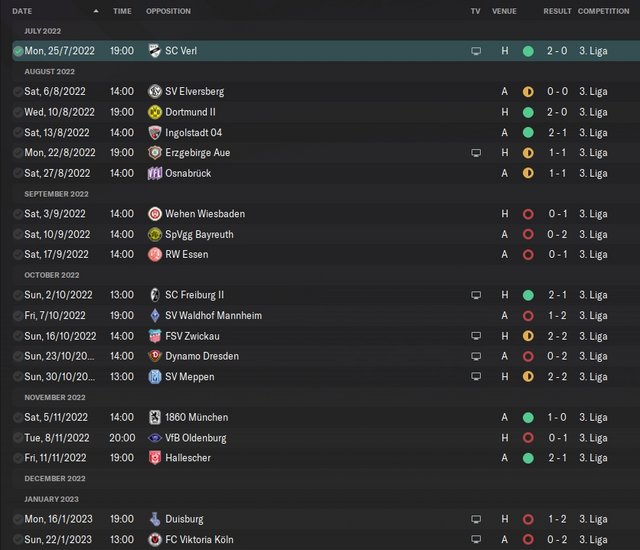 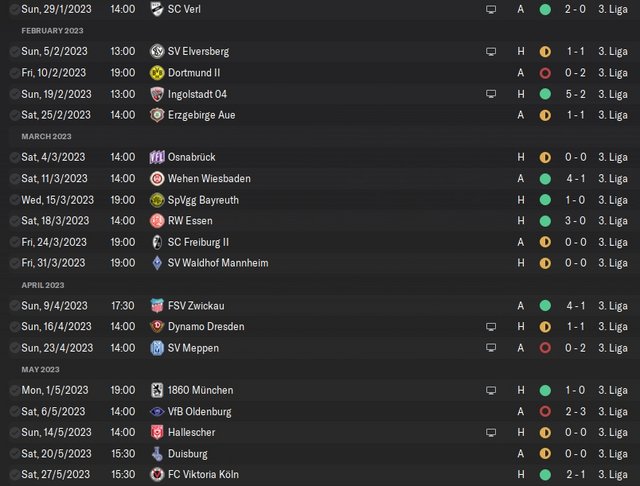 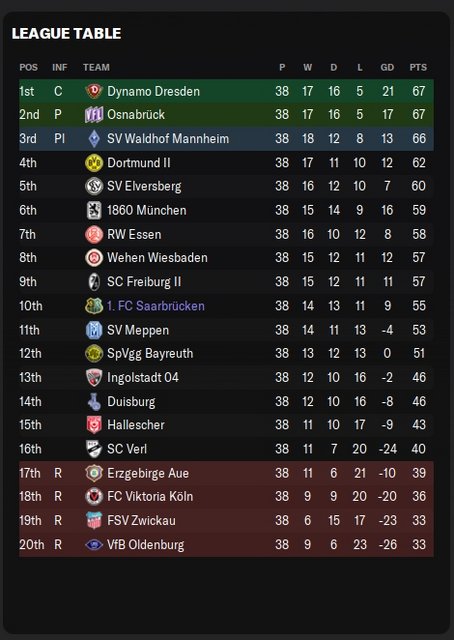 In my opinion, I thought that we could do it a lot better as a team.
Main goal now is to reduce the expenses from wages, release a lot of players, give some opportunities to young lads instead. I'll try my best to promote to 2. Bundesliga.

See you in a few days. 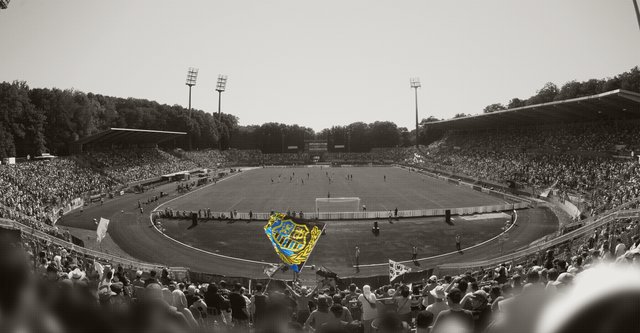 A thrilling season has come to an end.
Board's target of the season was to record a 3. Liga top-half finish.
Media's prediction was a 5th place. 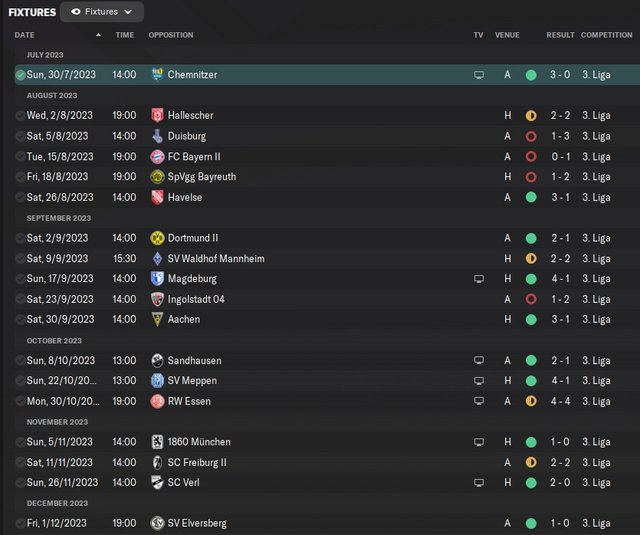 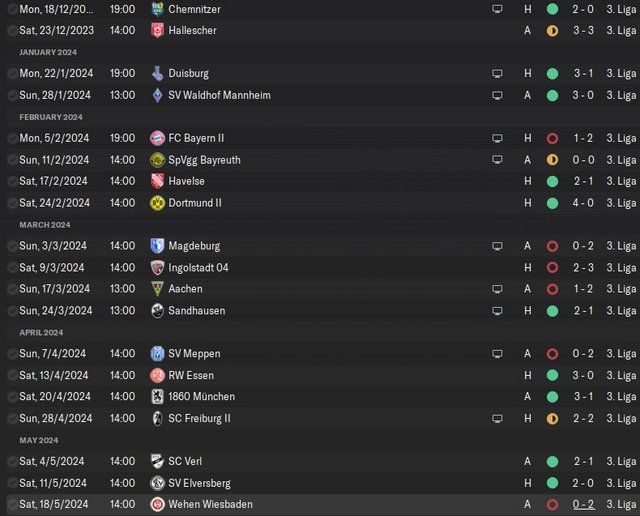 I almost screwed it all up at the second round. Oh my God, four defeats in five games.
But we came back as you see, four -really- important wins.

What a fight for the promotion!
Some info before 34th match day 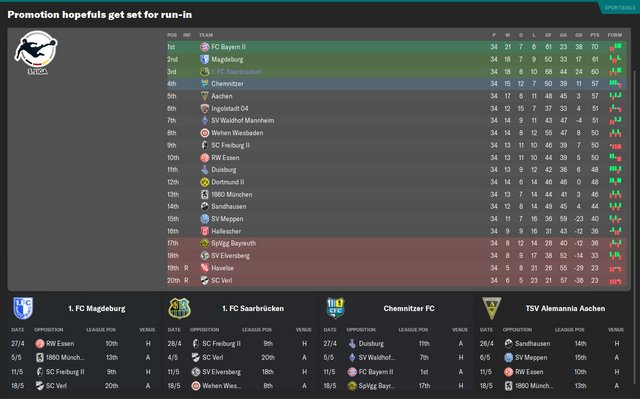 After 36th match day. Aachen is my only opponent now. I don't want to get involved with the playoffs, we are that close to the promotion. 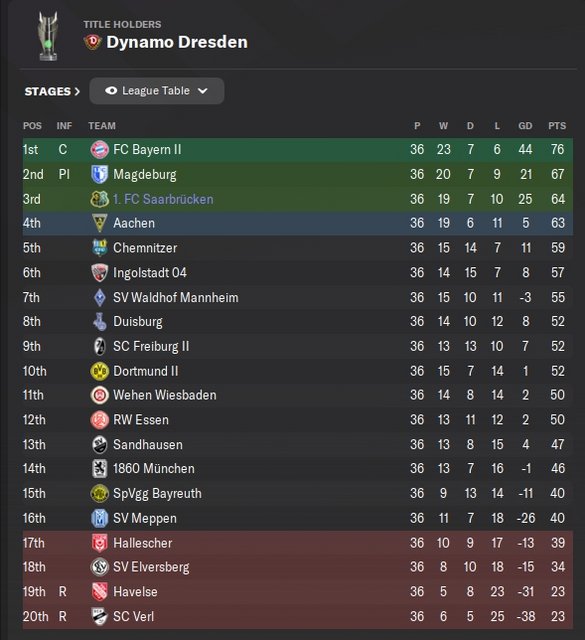 Easy win for us, everyone is happy. Also they're on their phones because Aachen is on a tie (1-1 score) vs RW Essen.
And suddenly a huge "Tooorrr" comes from the stands.
RW Essen just scored in Aachen!
"That tastes like promotion" 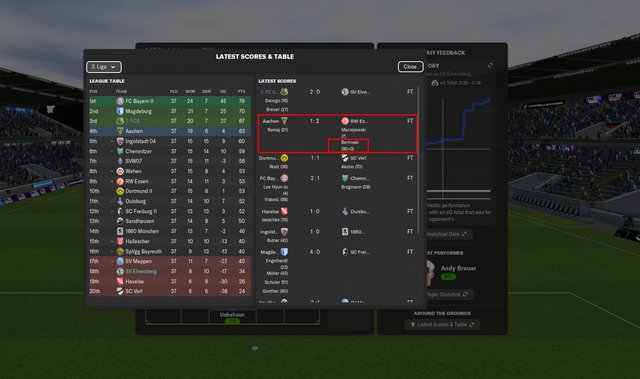 The last game at Wiesbaden was just fun for the young lads and Mesut Ozil. No pressure.

Final league table of 3. Liga 2023/24
*Bayern II (champions) were the surprise of the league as they were promoted from Regionalliga Bayern last season.

28th May 2024
President Hartmut Ostemann approached me and offered me a new contract.
I locked the one-year only contract length and reduced the amount of money.
One day later I got the award of the best Manager of the year.

Signing of the season
Mesut Ozil
It was 23rd of November 2023 when Jurgen Luginger came to the office with the scouting list. A very well known name at the top.
35-year old Mesut Ozil is still free agent, oh shit. Let's go for it, if we can handle it financially of course. I don't care if he can still run or not. I want him as an impact sub for the rest of the season.I approached him with a contract (player/scout) on €170K p/a ). Four days later, the transfer was sealed.

MVP of the season (according to average rating)
Rene Klingeburg (MC)
One of my favorite players in this team. He improved the whole midfield zone with his performances.

My Player of the year
Julian Guttau (AML)
Top lad. He helped us a lot with his 19 goals involvements, played so nice his position as IW (AML).

Flop of the season
Filip Bilbija, for sure. He cost me a lot as a 18-month loan from HSV. His performance was so bad in the second season. Never played after March.
I told HSV's Sebastian Hoeness to recall him a month later.

Extra flop
Sternberg, absolutely a failure. I take the whole responsibility, it was a panic move and an extension as well.


Before June comes to an end two players retired.
The great Mesut Ozil, a FIFA World Cup winner. He continues to our club as a scout.

And a loyal lad from Wadern, Steven Zellner. 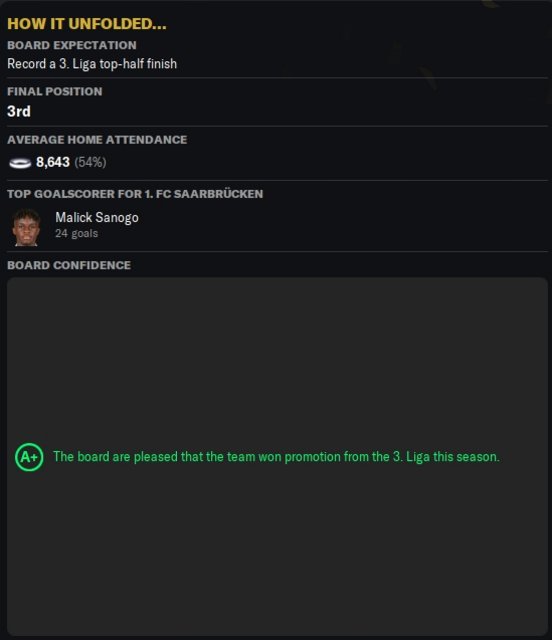 Next season is going to be really tough, I have only eleven players in my squad excluding the youngsters.
I hope the board could give me some money for some good experienced players, otherwise I will approach teams from Bundesliga and beg for some loans. 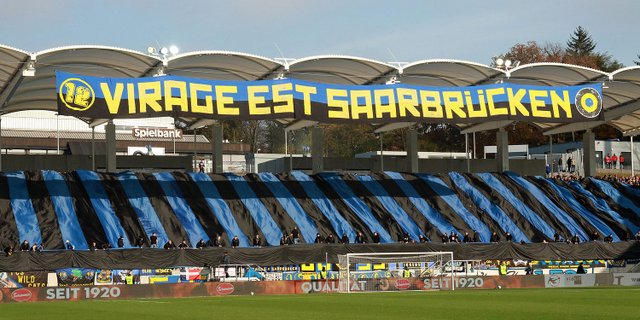 J_ames
2 months
Oh my goodness, you got Mesut Ozil!? That's a hell of a deal, and it's great that he'll be remaining at the club upon his retirement, though it'd have been great to have him for a season in the 2.Bundesliga too! It's great to see you comment on the deals that worked out, as well as the ones that didn't work out, because that's the part of our saves that's the most enjoyable (and frustrating!) thing.

I think you've already got a squad good enough to secure safety, but with a few savvy signings... who knows what could happen!? Good luck mate

Is there any way to upload images that fit the post page but to be clickable at the same time for a full resolution view?
Login to Quote

TheLFCFan
2 months
Excellent second season! The Ozil deal is brilliant and clearly made a great impact. It'll be a tough season next year but confidence must be high and I am sure the squad with a couple more additions will be more than good enough! Congrats!
Login to Quote