Stam
10 years • Edited
There are a few facepack styles out there already. The most popular one is the cut-out style, which is also the default style of the game for profile pictures. There's also a panini style, but it looks quite old fashioned. 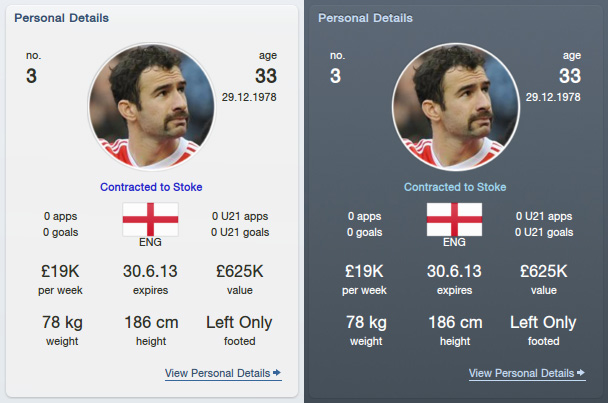 Mikethemanc
10 years
I've got Photoshop but not got round to installing yet. I might give it a go myself for you tonight if I get chance. My FMScout FC story is taking up a lot of my spare time at the min!
Login to Quote

swanny8589
10 years
do we have to do photoshop to actually get the facepack to work ??
Login to Quote

swanny8589
10 years
ohhh ok cheers. casue i cant get the facepacks to work
Login to Quote

Stam
10 years
@toonman8589:
If you already have other facepacks installed, I'm afraid you can't have both.

welshwiz1972
10 years
I can't get it to work so I must be doing something wrong. I have pasted the new layer , pressed ctrl & held down the left mouse button, and then duplicated the layer (it duplicates both), then applied the style and . . . nothing.
Login to Quote

welshwiz1972
10 years
Thanks to stam for all the help.

Stam
10 years
Once you get a pack ready, zip it and email it to me. I'll host in-house on our servers and release the downloadable on your behalf.
stam @ fmscout . com (without spaces)
Login to Quote

Plopper
10 years
Can we have AC Milan, Inter Milan, PSG and Lyon please. These are really good - well done!!

Stam
10 years • Edited
Thanks for your kind words Plopper