phinam51
10 years
I have a young striker in my squad with good attributes for target man, but i cannot get him to perform. Any suggestion for tactics that will work with a target man? I'd prefer a 442 formation as Im in middle of season and my squad is built around 442 so it will be more convenient.
Login to Quote

phinam51
10 years
Here is the player 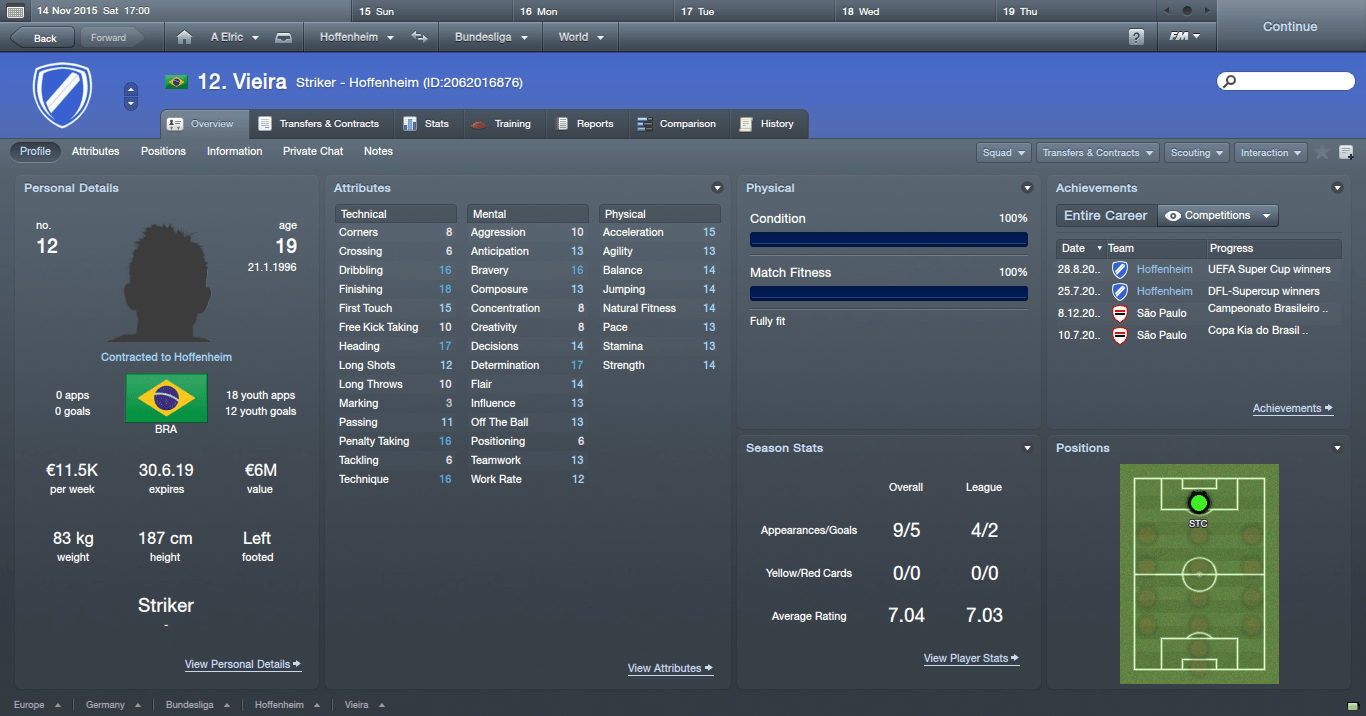 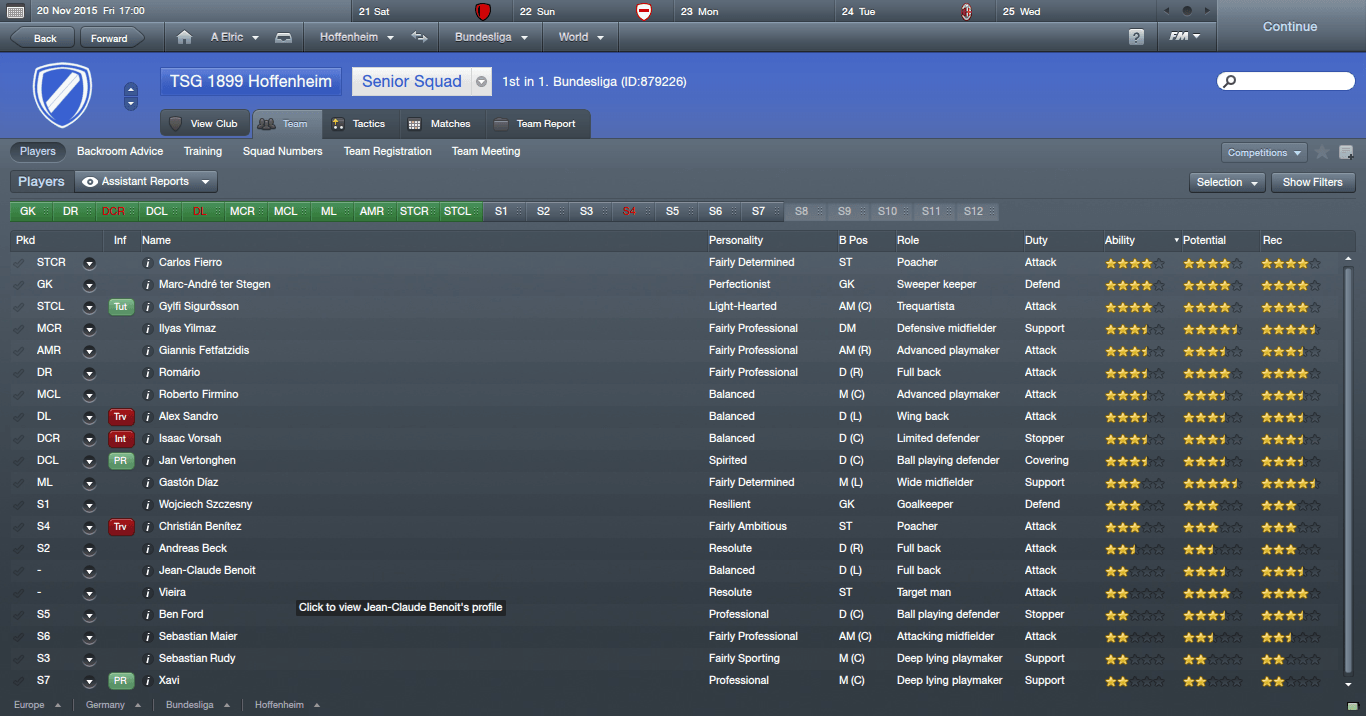 Any suggestion?
Login to Quote

RedArmy20
10 years
hmm you might want to try someone else as target man? vieira doesnt have the creativity and passing skills to be a creator which many target men usually are. he seems better off just being in the box and let others do the work around and create. try having your other striker as a target man. and maybe run on to ball or to feet instead if he is good at that.
Login to Quote

phinam51
10 years
I think you misunderstand me a bit. What i mean is how to use a target-type of strikers like Andy Carroll, Edin Dzeko and Chamakh. Vieira possesses great shooting and heading skills and IMO, he can play in the similar level with Edin Dzeko in future. Currently he training very well and my assistant keep suggesting me to give him more play time, but he doesnt fit in my tactics. That's why Im asking for help

mwichmann
10 years
I find target man play in FM frustrating. The things you pretty much have to do are select you're going to play with a target man, decide whether you're going to play balls in the air or to feet, set him to hold up play, and on the whole, orient your play to center on this one player - who then won't score very much, because he's busy receiving and trying to knock it down or lay it off to another player (most of the player's scoring will probably come from set plays). So now you need someone who's going to play off the target man, and I've found that difficult to really indicate in FM. I prefer a style that doesn't center around a specific player this much, but brings everyone into the picture more evenly, it becomes too easy to set up a defense to take this option away, but your instructions will keep your players trying to make it happen. Also if you've got one player designated for this kind of role, you can't do things like have the forwards - if you play with two - swap places during the game, at least not without manually resetting your instructions. Still, you should be able to play this player, the attributes look just fine, and your squad shows a pair of poacher-type forwards who should pair okay with your target type. You'll end up having to expect a lot from Sigurdsson, too - hopefully in an AMC position.
Login to Quote

phinam51
10 years
Yup, it's hard to play a target man striker, and I have never had a good season when trying to put a TM upfront. So that would be great if any one can share their tactics/ thought while successfully playing a TM striker like Edin Dzeko or Chamakh.

Personally I prefer trequa-poacher partnership with 442 formation, and Sigurdsson is playing as my trequatista striker in my starting XI. But it is a high chance he would leave in next transfer window, as he has a preference of playing in EPL, so Im trying to come up with a new tactic with my current squad. Vieira looks like a good prospect, but if I cannot find a tactic that would suit him, i might have to let him go on the next transfer window as well to find a more suitable striker.
Login to Quote

Sporting_23
10 years
in other post about cavani, every time i see the role they are in to, it's the target man role. and cavanoi scores like crazy. freaky crazy xD i dont know if is support or atack but the man scores. also the type of indications you give the guy colud tweak that scoring goal bia
Login to Quote

Sporting_23
10 years
also, could you post a screenshot of carlos fierro please?

ACarr20
10 years
Target man and a Poacher works great, exactly how Newcastle play atm. The TM will win headers, hold up the ball and flick on to a quick poacher with good anticipation attributes. You need to build the team around fast wingers and a great poacher to get a good performance out of a TM
1
Login to Quote

mwichmann
10 years
I didn't mean to say playing a target man is a problem as such, I just find that a specifically target-man tactic doesn't work as well as I like, but I play a more "normal" tactic and the target man-type seems to do fine. I do this with Derdiyok at Leverkusen, a player who on FM "numbers" is quite similar to Dzeko. This is different than real life it seems; the combination of Carroll and Suarez at Liverpool ought to be just perfect, but in this case Dalglish refuses to play a "target man tactic".

Wingers are important to this, and disappointingly hard to find in Germany, fwiw (except at Bayern of course, where you can't pry them loose)
Login to Quote

ACarr20
10 years
Try Sindey Sam from Leverkusen. Not sure if he will sign but he is certainly one to watch, along with Shaqiri
Login to Quote

phinam51
10 years
Personally I dont like playing TM alongside with a poacher. It is more suitable with a counter-attack type of tactic. When facing a weaker opponent and having dominance in possession, it is much harder to break through opponent defence line. One good example is the match between Liverpool and Tottenham several weeks ago. Andy Carroll and Belamy were put in front, forming a TM support-poacher partnership. Liverpool has 55% possession, all the cross from wingers and full-backs were connected well with Carroll but they still struggled to find a break-through. When Suarez was brought in, forming a trequatista-TM attack partnership with Carroll, they played much better, created more chances as Tottenham CB had harder time to mark Suarez, and Carroll was left with more space.
In Mancity formation, Dzeko position is always inside penalty box. Mancity using 3 AM behind Dzeko, moving and passing around more freely to distract and create holes in the opponent's defence line. If Dzeko can gain some space, he would be in perfect position to score, if he cannot lose his men, his movement also would help create space for Aguero to dribble through.
So with that thought in mind, I will try create some tactics and experiment it in friendly matches in Jan to see how it would work. As indicated before, my tactics would be built around 442 formation, so any suggestion about how to set instructions and roles for players is welcome :).
PS: here is my Carlos Fierro for sporting_23 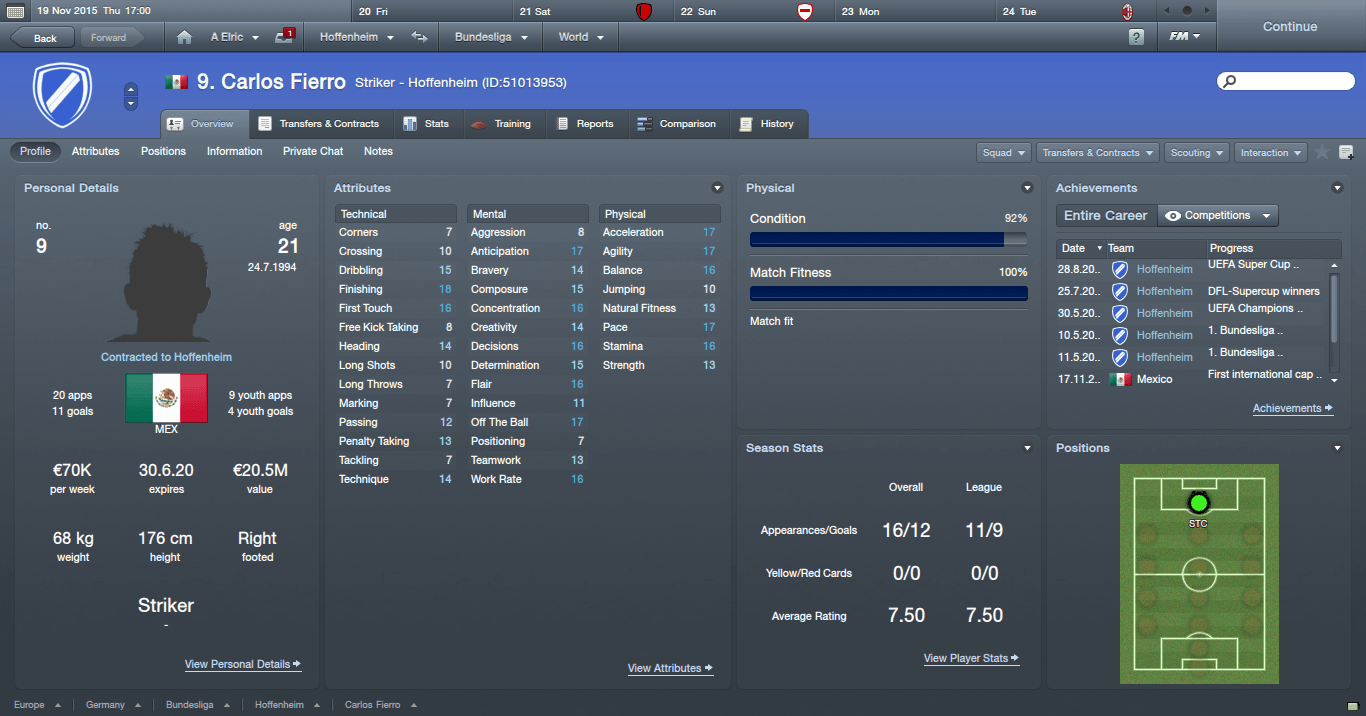 You are reading "Help! How to use a target man?".