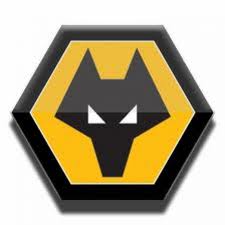 Sky Sports News Flash
In a shocking 24 hours wolves manager Terry Connor has walked out of the club. We caught up with Connors and asked him why he walked out on the club before the season even started. Connors said “I did not enjoy the game anymore and lost all passion for the beautiful game”. In what is shocking news to the wolves board and fans. We caught up with the wolves chairman Steve Morgan and asked what he makes of the whole situation. Morgan said “I am disappointed with Connors and the wolves broad will now be looking for a new manager”.

Monday
Time (6.30)
Southgate is gone home for the rest of the day and will have until Wednesday to decide if he wants the job or not.

Monday
Time (7.30)
Sky Sports News Flash
Just one hour after Southgate went home Roy Keane was seen walking into the wolves ground we understand that he is also having talks with the wolves board.


Tuesday
Time (11.30)
Sky Sports News
We caught up with Wolves U18 coach Jason Kavanagh what he makes of all this. He said “I am not paying any attention to what the board are doing, I am trying to get my players fit for Pre-season”. We asked Jason has he applied for the mangers post as he came in at 50/1 for the position. He replied “Of course who wouldn’t apply for a mangers post, but the board have yet to get back to me.

Tuesday
Time (7.30)
Sky Sports News
The Wolves board have come out and said that talks between Roy Keane and the board have broken down as Keane was not happy with the contract given to him.

Friday
Time (1.30)
Sky Sports News Flash
The Wolves board have announced the appointment for Jason Kavanagh as the Clubs new manager. We understand that Kavanagh has been given a contract until June 2013 on €19,750 p/w and he will also be keeping his current staff. Kavanagh has been said to be relishing the opportunity to take his career to the next level and the supporters and happy that the board have given the job to someone within the club and who know the club and players exceptionally well. In terms of a transfer budget we understand that Kavanagh has been given €9.5Million and a wage budget of €500,000 to accommodate his aspirations.
Login to Quote


Kavanagh has hit with a lot of question bbc asked him how is he going to play this season is he going to sit back and deafened Kavanagh said no I am going to turn this club into an attacking team that clubs will be afraid to play and also have a great defence. Sky Sports asked how are you going to change the way the club players I am going to use the players I have and also give the youths bit of a run around and no position is Guaranteed and players will be fighting each week for the spot including the youths. Kick’ asked any transfers in mind wait and see is all Jason said.
Login to Quote

1650 Yo
10 years
i like the way you have started mate, and not many people play with wolves so yeah interesting..!
Login to Quote


Wolves had a great pre season playing a total of eight games and Wining them all if they can take that form into the new season they will do really well we cought up with Jason and asked him what he thought of the matches he said they were great matches and the team showed that they are ready for the new season the only thing is that every player had a great pre-season it’s going to make my job on picking the team a lot harder.

Sky Sports Transfer News
Wolves manager Jason Kavanagh has brought in 3 players that cost all together cost 17 million euros the most wolves have ever spent in one season on players Jason said he is happy with the players and won’t be bringing in any more this season that he is happy with his team now.

KrisConnolly
10 years
Good results in the Pre Season. Nice tranfers you have got in there. Good luck and interested to hear whats to come.
Login to Quote


Sky Sports News
Wolves have got off to a great start in the premiership playing five games wining 3 and a draw and one loss it’s a great start for a team who many have said will be fighting against relegation this season. We caught up with wolves’ manager Jason and asked him what he thought of the first five games he said it was a great start from the lads hope we can build on the start we have made and keep it going for the rest of the season.Here are the match Fixtures. 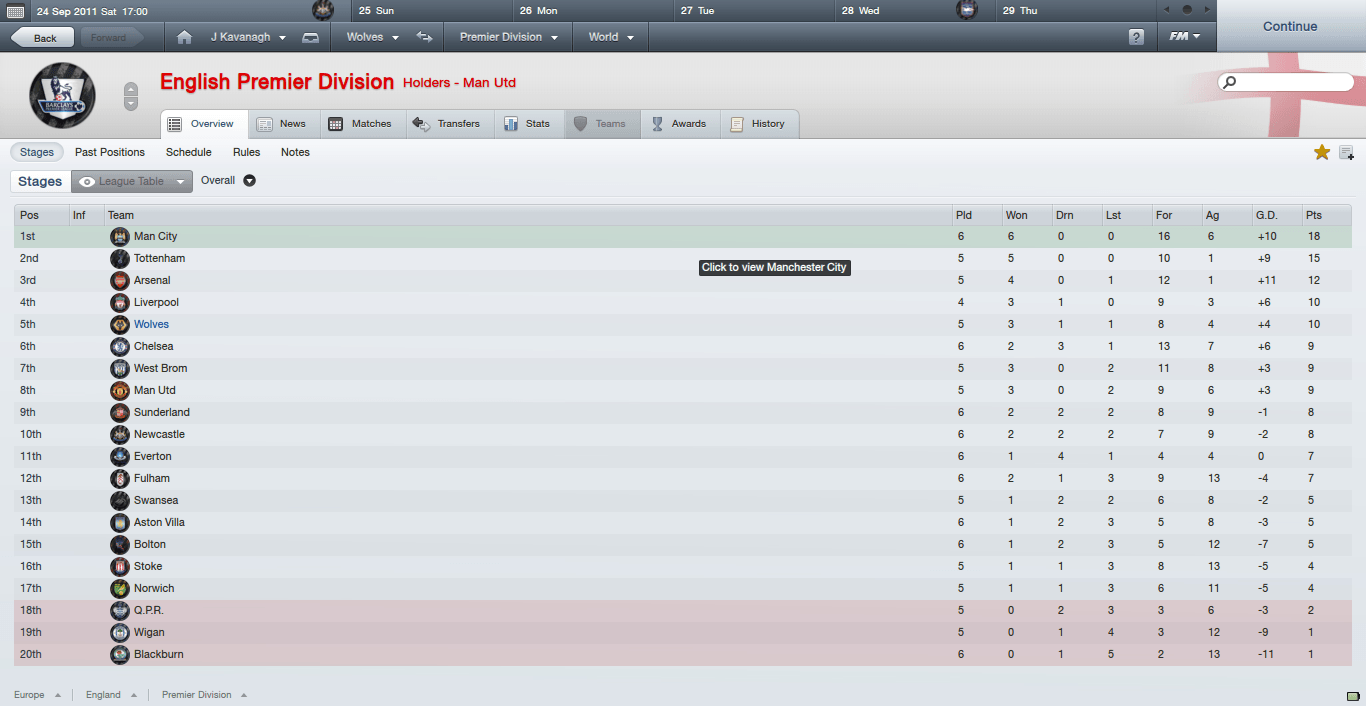 Sky Sports News
With the carling cup kicking of we get to have a look at the big teams using some of there youth players Wolves manager Jason Kavanagh said he will be doing the same giving the younger players a chance in the 1st team
The Match,s and Results.


Sky Sports News
With ten games now played wolves still find themselves in the top half of the table and doing really well all tho there last five games played they only managed to get 2 wins but Kavanagh said even tho we only won two games that’s still six points and we are still in top half of the table yes we last 3 in five and I am working to fix that over the coming weeks but you have to look at the two games we won 4-2 win against arsenal witch was a great result to come away with and a 4-0 win away against Wigan another great win. And with a lot of injury’s With Olivier Giroud out for 10 weeks and Jamie o hara also out for 5 weeks and Steven Fletcher out for 6 weeks we have lost 3 great players so over all I think we are doing really well. 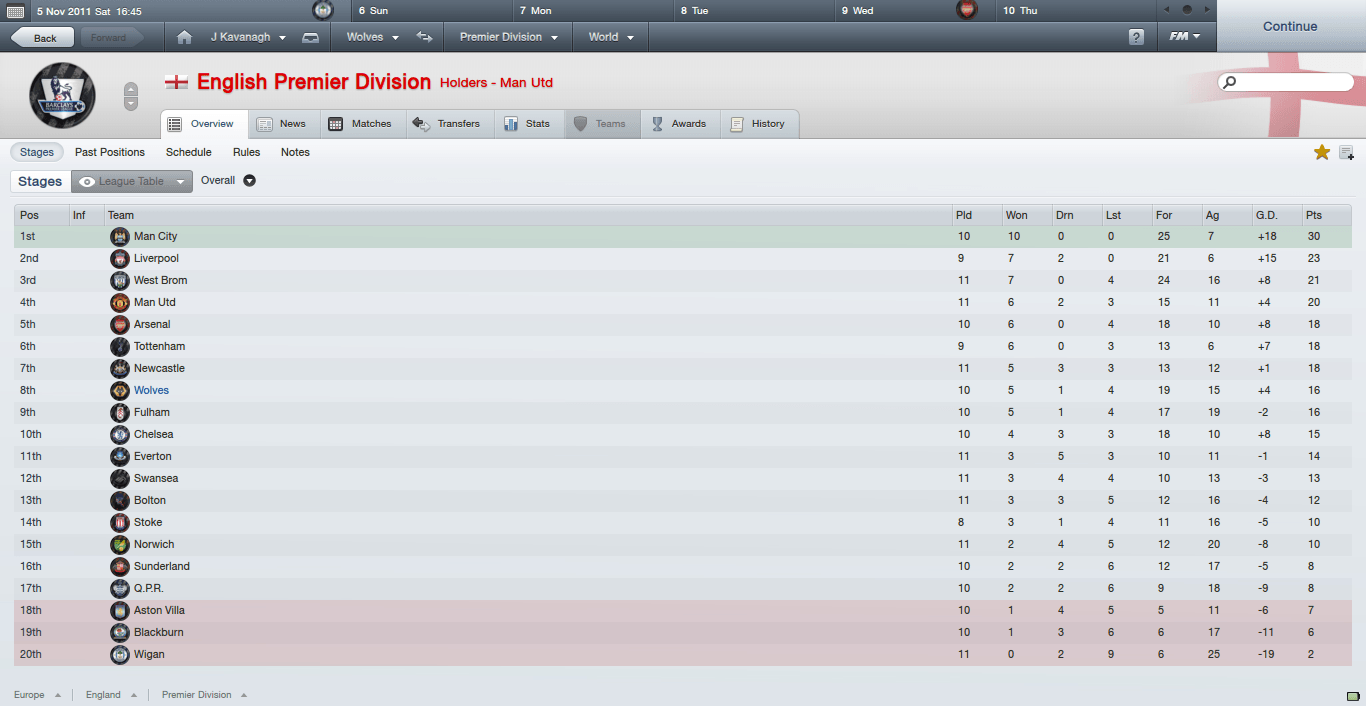 Wolves Vs Leicester (Away) 2-0 (Win)
Login to Quote

Callum the Toffee
10 years
Maybe think about improving your grammar if you're going to carry this on for much longer.
Login to Quote

edam22
10 years
Giroud is a great signing and Dawson has fantastic potential. Good luck with Wolves
Login to Quote

#55328 Callum the Toffee : Maybe think about improving your grammar if you're going to carry this on for much longer.

porkchopz-11
10 years
i agree with jason. go fuck off to some other forum
Login to Quote

patrick1
10 years
There isn't really any need to swear on a friendly website. there are probably young kids on here!
Login to Quote

You are reading "Wolves A New Era".