saqib786
10 years • Edited
I always had the dream of managing in Scotland. Of course I thought I would go straight into the SPL and manage Celtic. But this isn’t a game, this is the real world. I spoke to the Alloa chairman Mike Mulraney who was very interested in hiring a new manager, to take them back up to division 2. He seems to have lost faith with Paul Hartley. I decided the dream job was never going to come so it was time to get started somewhere. Not sure how it will go, but i’m going to give it my best shot! Mon the Wasps!
Login to Quote

saqib786
10 years
Well, that my first season over. Sorry I’ve not really been in touch, this isn’t anything like I ever imagined. I hate to say the quality of football on offer was very poor. I lost count the amount of own goals we conceded, and the amount of penalties against my team! I also struggled badly with injuries, and there was no depth in the team. My best striker Stevie May on loan from St Johnstone was injured for 3 months, he was just back from injury and looked good in training so I decided I would put him back in the team. Only for Stevie to be injured for another 3 months and out for the rest of the season.

We ended up finishing 7th, the chairman wasn’t too pleased but he understands this is a work in progress. It’s good to have that kind of backing. The real work starts here; I will get this team into the SPL if it kills me. 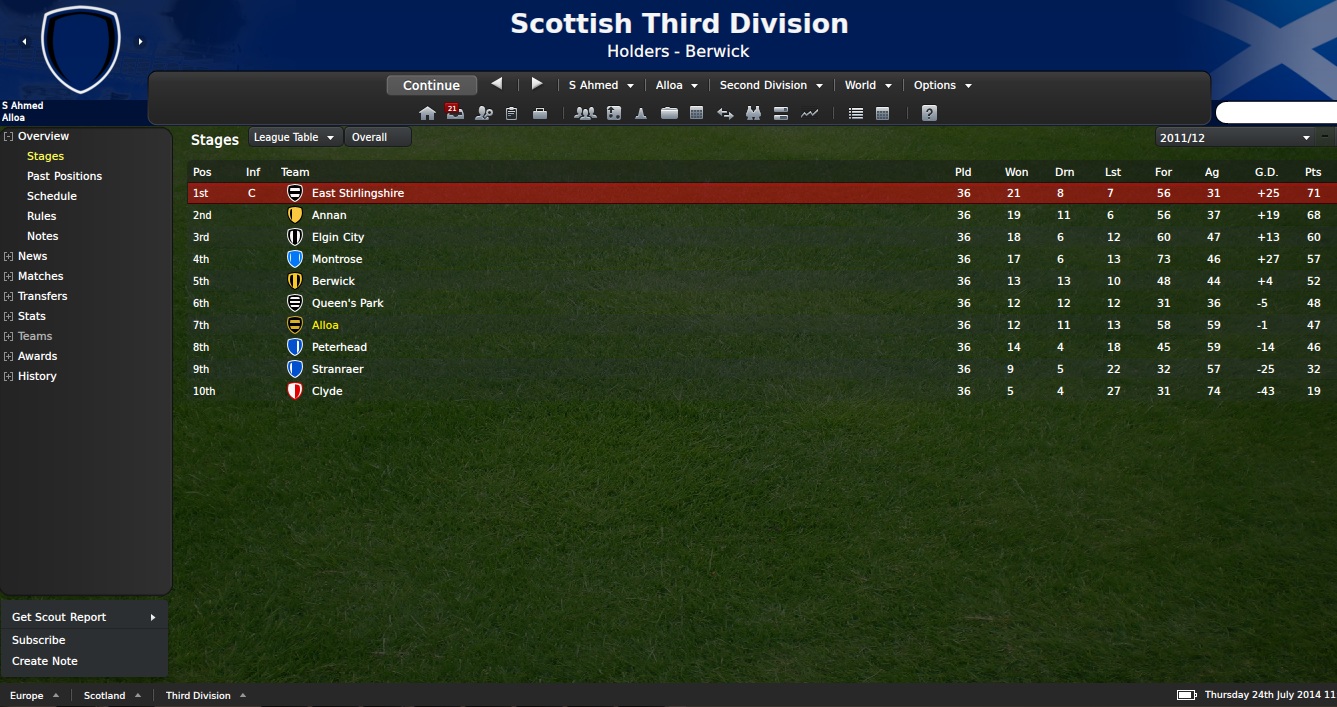 saqib786
10 years
CHAMPIONS!!!! I DID IT! Second division here we come! So proud of all my players, it wasn’t easy we had to do it the hard way. There were times I thought we were never going to make it, but in the end we managed to win by 3 points. Montrose put up one hell of a fight, but in the end we wanted it more. I spent the pre season getting in new players and letting a lot of the other lads go, it was just time for a change and I wished them the best of luck in finding a new club.

It was time to re shape the defence and make sure I stopped conceding so many goals. With any team if you don’t have a strong defensive line you can forget about winning anything. After conceding 59 goals last season we managed to have the lowest goals against in the league!

Now this is where the hard work begins, I want back to back promotions even though I know it won’t be easy but I believe in this team. Watch out Scotland, the mighty Wasps are coming!
Login to Quote

saqib786
10 years
Well....I don’t know where to start. Rather than being close to another promotion I almost put us back into the 3rd division. I would never have thought the gap between 3rd and 2nd could be so big. We conceded the most goals in the division. There were too many last minute goals against us and we lost 15 games! It’s just not good enough!

A lot of the lads let me down this season, and as a result are being let go. I need players that will come through when it matters the most. I need to change my defence, we managed to stay in the division and we have a new season ahead of us. We can still do it! I'm starting to get offers from other clubs now, but I’m not interested until I get to the point where I can’t take this club forward. Here's hoping for a better season! This time around I will let you know how I'm getting on in January; let’s hope I’m telling you we are top of the league

Braveheart
10 years
I DO'NT NO, ALLOA R A GOOD TEEM MATE, I THINKN YOU SHOOD HAVE BEEN IN THE THIRST DIVISHIN BY NOW
Login to Quote

- I managed to have the lowest goals against in the division again. I brought in 3-4 more players and the best of them was by far old Steve Kean! who managed to give me 16 goals before he broke his leg a month before the end of the season. Without him we went on a bit of a blip but the lads managed to make it over the line. Its now onto the 1st division and i think for the 1st season i will just be looking to survive and then build for promotion. Wish me luck!
Login to Quote

Blue
10 years
What skin is that?
Login to Quote

You are reading "The great Scottish 3rd division Alloa experiment".