_Man_u_barmy_army_
9 years
I will start updating you, the FmScout community on the leaders and fallers of this week’s fantasy football. Sorry I couldn’t start from the start of the season, but I had educational commitments

So I will round up game week 8 for premier league fantasy football for FmScout: 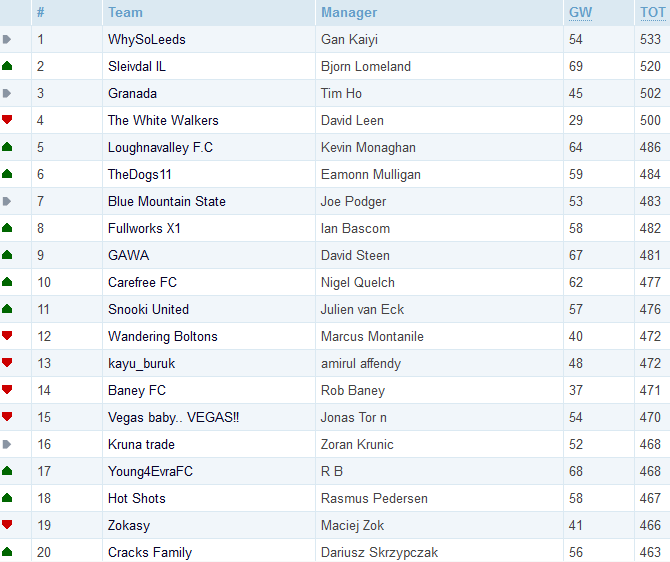 Winners this week out the top 30

Nolan as a captain won these two a ridiculous amount of points, and Sterling also with 11 points stand along deemed to be a good pick.

Losers this week in the top 30

The White Walkers dropped vital points in their race to 1st place, with Steven Pienaar gaining a -1 point due to being sent off, as well as 5 of his players in his entire squad not participated in a game this week.

Key 2 matches of next week

With Manchester United playing away, and Chelsea being ahead in the league, this title clash will be an edgy one. And your picks in this game could change you from a loser to winner or vise-versa.

The Merseyside Derby also gives another key game this week, in which this could be a fiery affair. So watch out for your Liverpool or Everton player getting a yellow card or possibly even a red one for this game.
1

Winners this week out of the top 30

Losers this week in the top 30

Unlucky for Blue Mountain State this week picking both Ivanovic and Torres (sent off against united) among an average team, with a Tevez captain gaining 12 points as a reprieve.

Key 2 matches of next week

One which based on reason results could prove to be an easy win for United, but you never know with Man United’s defensive issues of late it will be up to them to try and keep a clean sheet for once.

A difficult match for under-performing QPR, with a Reading side that scored 3 against Fulham in gameweek 9, I think QPR may snatch this one, as it is a go
Login to Quote 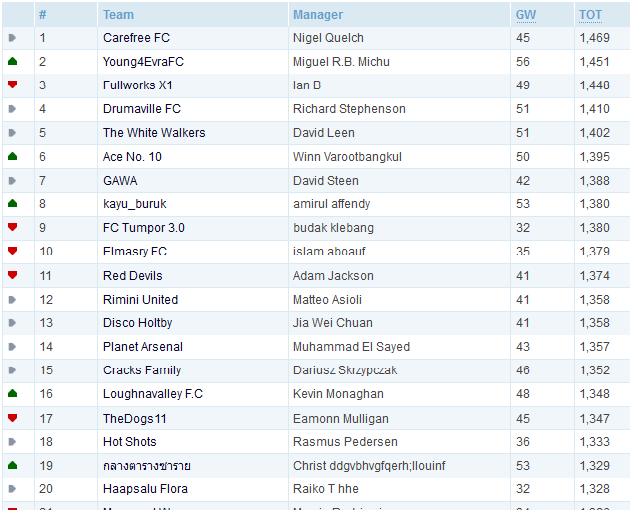 Winners of top 20 this week

Mata, Bale, Walcott, and a few solid good picks, none of which were his captain gave Miguel the 56 points

Worst Performers from the top 20

Rafael getting 0 points, a gibbs injury forcing him to 1 point there, Wilinson being a weak Defender, and a few other underperformers (BA, and Foster for Haapsalu Flora

QPR vs Norwich: could be a game where the tide turns even more so in Harry R's favour, I thing QPR will win this one, and Remy on song?

West Ham vs Swansea: A trip to London for the welsh team, I think this one could be a tight game, but I'd but my fantasy team focusing on West Ham's Strikers I think they hae this one
Login to Quote

Despite the lack of updates, the final standings for the 2012/13 Fantasy Premier League are here! Just 285 points separate 1st place from 50th place, a very close competition for the year!

So Nigel Quelch finished top with Carefree FC, finishing with 2,326 points. Just 31 points behind Nigel is Ian B, getting 2,295 points with Fullworks X1. Then in third place is Budak Klebang, who was with FC Tumpor 3.0 and managed 2,263 points. A big congratulations to the top three.

However, the standings were also measured at every quarter, so who came in the top 10 for each quarter?


Bjorn Lomeland took the lead at the end of the first quarter, scoring 568 points with Sleivdal IL.


Niguel Quelch scored the highest throughout the second quarter, getting a massive 600 points with Carefree FC.


Ian B scored the highest throughout the third quarter, with Fullworks X1 scoring a brilliant 719 points!