It has been announced that Delroy Wilberhand will take the reins at Chelsea, even after the spectacular efforts of Roberto Di Matteo to win the FA Cup and Champions League double. Roberto Di Matteo has decided to leave Chelsea and continue as a manager. The unexpected news has made the Chelsea faithful furious with the Board and particularly owner Roman Abramovic. The manager has said how delighted he is with being hired because he has always supported Chelsea

The new manager is a former player who made his career in Leiecester City acadmey before spending the rest of his professional playing career at Hinckley United, captaining the side for 15 years. He decided to retire last season as Hinckley Utd got relegated from the Blue Square Championship.
Login to Quote


Delroy Wilberhand has announced his main 2 tactics for the 2012-2013 season to owner Roman Abramovic. They are similar to the ones Roberto Di Matteo experimented with before leaving the club.

These tactics worked very well in pre-season, with 5 wins and 1 draw in 6 games.


The signing of the top-class striker has come within days of the Community Shield final between Chelsea and Manchester City. The striker is expected to start the exciting game. Huntelaar is the only signing made by Delroy Wilberhand and there isn't expected to be any more. His services cost Chelsea £37.5m. 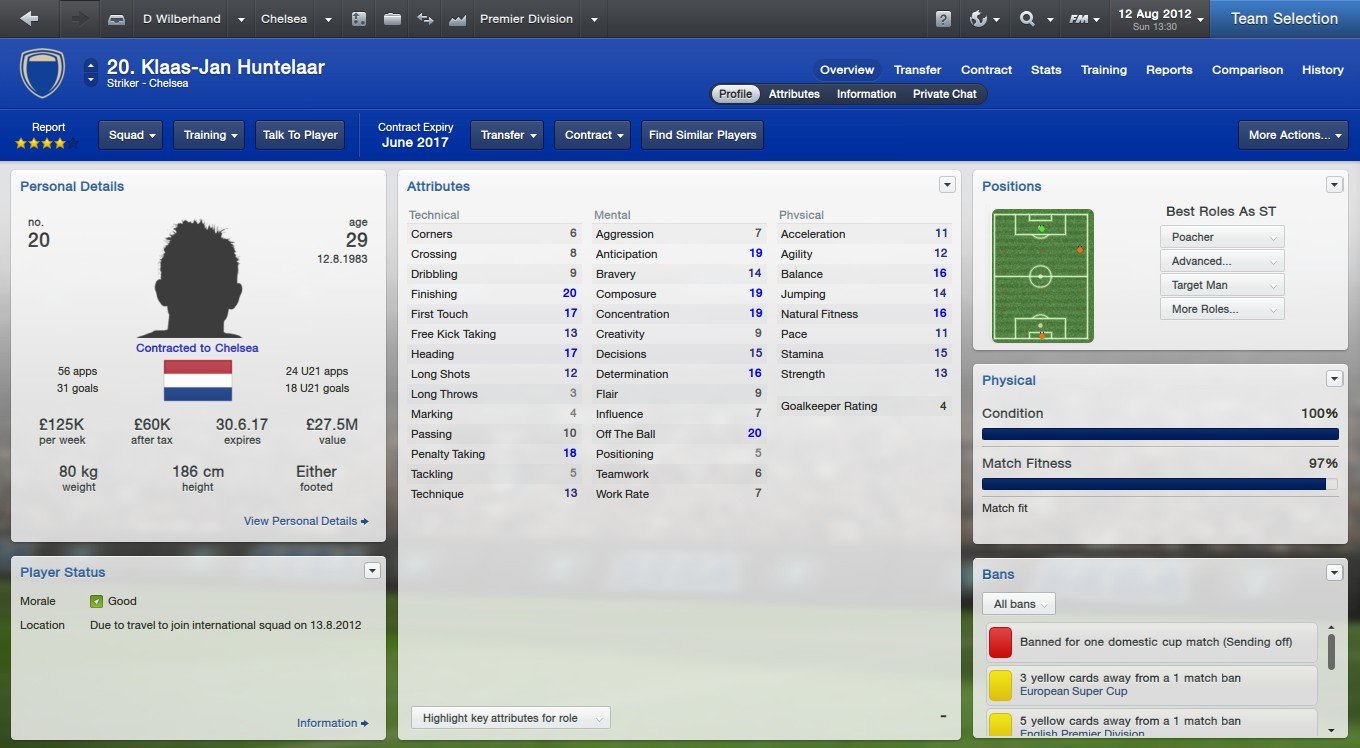 
Delroy Wilberhand has announced his main 2 tactics for the 2012-2013 season to owner Roman Abramovic. They are similar to the ones Roberto Di Matteo experimented with before leaving the club.

These tactics worked very well in pre-season, with 5 wins and 1 draw in 6 games.

Will be following this, using something similar to the 2nd tactic on mine too.
Login to Quote

the pharoh
8 years
signing huntelar is a good piece of business but aged 29 yrs and for 37.5 Million pounds its very very poor, in two years time hell be 31 yrs and worth 5 Million pounds that means 32.5 millions down the sewer.
Login to Quote 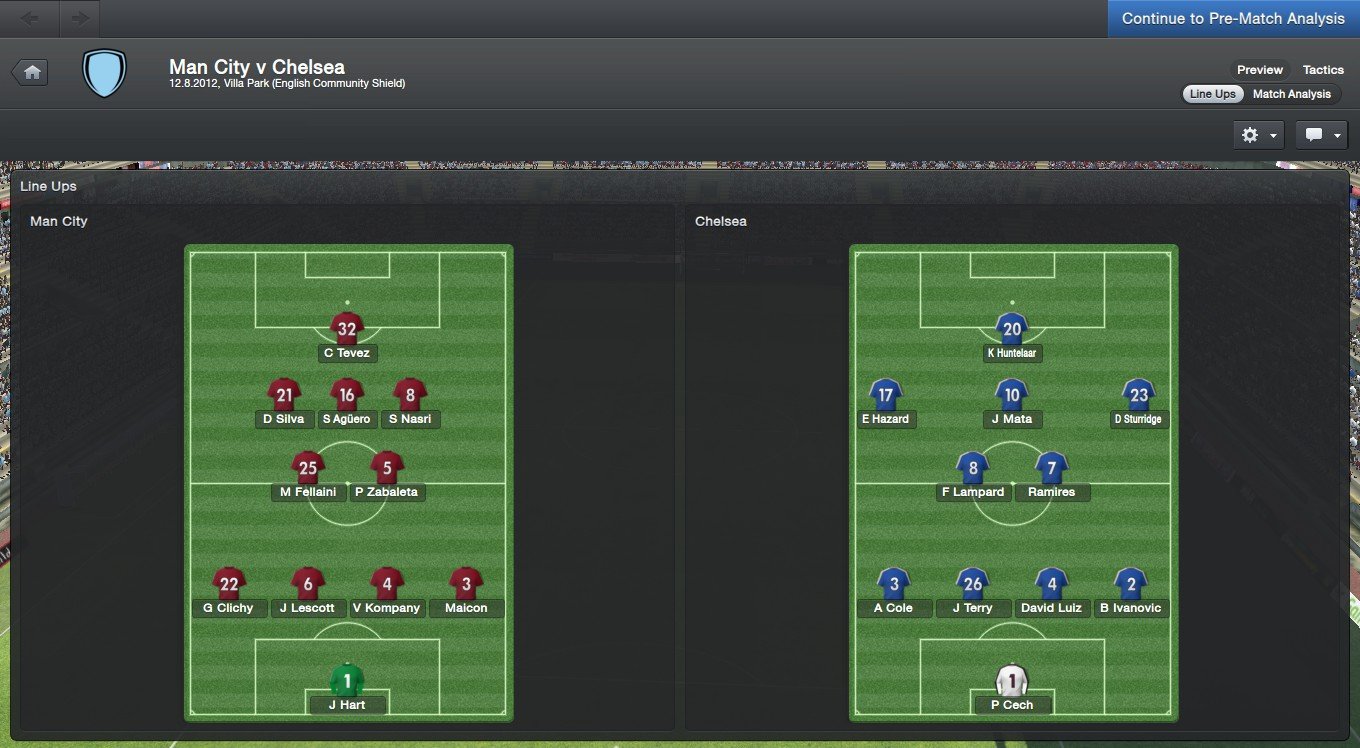 22nd Minute great Chelsea chance:
Ramires won possession in the middle of the park for Chelsea and tapped it to Mata, he then hit it to Hazard first time to put him in. Hazard showed great pace to get away from the Manchester City defence and chip Joe Hart, over the keeper and so close to going in. Fantastic counter-attack!

31st minute Manchester City chance:
Teves with a fantastic pass from the edge of the area into Aguero who should've scored from just outside the six-yard box. Great save from Cech from a tight angle.

44th minute Chelsea chance:
Huntelaar with a great cross towards Mata who misses the header, but then Sturridge attempts the diving header and puts it straight at Joe Hart from the edge of the 6 yard-box.

45th minute, 2 - 0 Chelsea Goal:
Hazard ran it down the left hand side and crossed/shot at Joe Hart from a really tight angle, who spilt it straight to Sturridge who sent it into the open goal.

Half Time!
Chelsea dominated the first half.
Login to Quote

52nd minute, Chelsea disallowed goal:
Juan Mata with a free-kick from far out the left hand side, fired in as David Luiz pushes Joe Hart which causes him to spill the ball into his own net. Rightfully disallowed.

63rd minute, Manchester City chance:
Maicon with an amazing ball over everybody to David Silva who was in on goal and another great save from Petr Cech.

66th minute, Chelsea chance:
Mata with a counter-attack from a Manchester City corner, ran it down the right side and cut inside onto his left into Huntelaar who had no defenders around him who had his shot saved by Joe Hart.

70th minute, Manchester City chance:
Maicon again with a great ball from the right into Tevez who hit it first time and a great save by Cech who was stretched.

90th minute, Manchester City chance:
Fellani won it in the middle of the park and passed it to Dzeko who put it into Tevez first time who got away from John Terry and pulled an amazing save from Cech, deserves a clean sheet.


Chelsea fans all over the world are celebrating as the team triumphed 2 - 1 over Manchester City, it was a great performance from everybody in the team. MOTM Eden Hazard announced after the game he was delighted with how he played on his debut and hopes to build on this great performance. Terry and Lampard both said they were delighted to lift another trophy together, and also said Delroy Wilberhand doesen't want to get rid of the old gaurd yet, which means their jobs are safe! 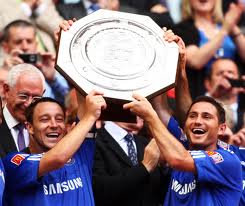 Well i desperateley needed a striker, I only had Torres and Sturridge and I am planing to play Sturridge on the right this season while Oscar trains up as a right winger. With Abramovic's backing I should be fine though. Also i agree that it is a waste but still, if he plays well then happy days

or.dabool
8 years
So far so good. A win in the Community Shield + signing of Huntelaar. Good luck mate!
Login to Quote

Well i desperateley needed a striker, I only had Torres and Sturridge and I am planing to play Sturridge on the right this season while Oscar trains up as a right winger. With Abramovic's backing I should be fine though. Also i agree that it is a waste but still, if he plays well then happy days

you may be right he is going to preform well(hope he does,but i'd rather buy Neymar or Cavani for that sort of money.good luck though
Login to Quote

Arvind
8 years
With Torres scoring 5 I don't see why you need another striker.

Akash
8 years
I'm also on the fence about the signing of Huntelaar. With 20 Finishing, he will do the business for you, yes, but you should now make sure that you don't make any panic buys.
Good win in the CS. Will this story rival ChrisBorg's?
Login to Quote

Haha so far so good!! Ive gone a bit mad on my new one with the chequebook but that's just with the excitement of the new game

With Abramovich you always end up spending needless cash for the first few seasons!!
Login to Quote

thats a secret! i havent even posted that yet

You are reading "Chelsea FC Story".