I have chosen Barnet for a few reasons. Firstly, although I don't really support anyone, they're probably my favourite League 2 team. Secondly, They've been lurking at the bottom of the table for a few years now but haven't been relegated and this year is no exception. I aim to dig them out of that hole. Lastly, their highest ever finish was 24th in Npower League 1 and from the title, you can probably tell I'm aiming to take them higher than they've ever been before. Plus, it's gonna be a big challenge and I like LLM so it should be a bit of fun.

A history of the club if anyone is interested:

Next update will cover season expectations, transfer/wage budgets and the staff.
Login to Quote

I met the chairman on my first day at the club. After a good chat on many subjects, we finally got to the topic of the season's expectations. He told me that our lowest expectation would be to avoid relegation. This made perfect sense to me and I told him that I agreed to avoiding the drop. Along with these expectations came a transfer and wage budget for the season.

A transfer budget of nothing is fine with me. I was never planning to spend. All my transfers will be coming in on frees. As for the wage budget, it's not a bad figure at all and I think it will be easily sufficient. Personally, I'm aiming for a mid-table finish and then to challenge for promotion in 2013/14.

Here is the current staff situation:

I was very surprised that there was no assistant manager in place when I came into the job but the lack of other staff wasn't so surprising. I got to the straight away. First off, I offered Kenny Brown the job as my assistant, despite his obscure reputation. I changed Fairclough and Doyle into first team coaches, as well.

Then I went on the search for new staff. I brought in my maximum 3 scouts. John Milton, Ola Ball and Bobby Roberts. I also brought in goalkeeping coach Paco Liano, physio John Brewster and fitness coach Duncan Russell. That should be enough for now.


Next update: Tactics and Pre-Season Friendlies.
Login to Quote

Akash
9 years
Let's see if you reject Barcelona because you are happy at Barnet.
Login to Quote

Ah, I see what you did there

The matches lined up:

Main tactic we will use for pretty much every game. Slight tweaks will obviously made but this is it at the moment.

We also have 2 other tactics set up but they will be used very rarely, so I haven't bothered doing screenshots. The formations are 4-4-1-1 and 4-4-2 Diamond.

We've completed all of the friendlies and here are the results from the 5 fixtures:

Not the worst results. We never conceded too many against the top teams and they generally weren't play 2nd and 3rd string players. I would've hoped for a couple of goals though. Obviously, the team started to gel a bit more and we started getting on the score sheet in the last 2 games.


Next Update: Transfers and key players.
Login to Quote

In my opinion, we've had a good transfer window, strengthening all areas needed. Underneath is a summary of all dealings.

Basically, I've gotten rid of all players that were excess to requirements and/or whose wage does not match their ability levels. Also, all loanees' wages are being payed in full and are on 6 month deals.Jordan Brown is a young LB with decent potential and I have loaned him out because he isn't good enough to start and will be replaced by someone better. I would've liked a permanent deal but none were forthcoming. Liam O'brien is a young goalkeeper with good potential but I didn't feel the need for 3 GK's in the squad and he was on higher wage than my other backup 'keeper. Steve Kabba is not a bad striker but a wage of 1.3k was way too high and was released. Clovis Kamdjo is a young CB with again, good potential but with Rui Marques signing there wasn't enough room for him. Curtis Weston is a CM that would've been purely a backup so therefore, was loaned out. Also, an 800 pound wage didn't match his ability. Again, I would've preferred a full-time deal. Finally, Gambin is a youth team player with good potential. He'll get games at AFC Hornchurch so it's a good deal for me.

All transfer in have their screenshots on the 'key players' segment next.

Ahead of the competitive fixtures, I thought I'd give you screenshots of who are most likely to be our best performers of the season. This will also help you gauge the quality of the side.


[/spoiler]
Collins John (surely it should be John Collins?) is the best striker at the club, according to the staff and will generally be a starter in the Deep-Lying Forward role.

Daniel Guerrero is an experienced central midfielder. I feel he'll have a very key role in the side and this is reflected in the 1.4k p/w wages. He will generally start in the Ball-winning Midfielder role.


[/spoiler]
Experienced, Welsh midfielder, John Oster is aging but he still is a definite key figure in the squad. He has good technical and mental attributes. He'll take up the Advanced Playmaker role in midfield and I'm confident himself and Daniel Guerrero will have a good partnership.

Mingo brings good experience to the squad and his good defensive quality was the main factor behind this signing. Quality was needed at LB and with Mingo, we have it. A 700 pound p/w wage is good value. Although, because of his age, his fitness is dropping and will need more rests than other players.


[/spoiler]
Romone Rose should be our highest goalscorer this season and you can see why. Good pace, dribbling and finishing makes him a good Advanced Forward/Poacher and that's where he'll be starting. At 22, he still has plenty of room to grow.

Ruben Martinez already has good stats for pace, crossing and dribbling and at 22, he's certainly not at his peak. I think he's easily our best LM and should be getting plenty of games. Only 550 pounds p/w wages, too.

Last but certainly not least, Rui Marques is a very experienced CB and has very good attributes. He should be the one marshalling the defence. The Angolan should be a key figure and a 625 pound p/w wage is an absolute steal.

Akash
9 years
The lower leagues are all about the wages and how you get the right balance between getting the player you want and keeping his wages under control. You've done well to get rid of the big earners and replace them with equally good, and cheap replacements. Good luck with the "real deal".
Login to Quote

Moppy666
9 years
Thanks for your comment, Akash. That was exactly my aim and I think I've done fairly well. We'll see when the competitive matches come about, though we'll definitely need time to gel because I think even apart from my signings, there are alot of players who will make their debuts.
Login to Quote

*Goals in bold are scored by Barnet.

A fairly poor performance, the team did not play as a unit but I suppose that should be expected with 9 debutants. Need more gelling time.

I thought we played fairly well. I think we allowed them to get too many shots in and it told when Hourihane hit one from 20 yards. We had 3 clear cut chances but we didn't take them. Not a bad result though.

Again, not a bad performance. Again, one we could easily have won. Elliot Johnson's lack of concentration resutled in Nurse's opener being cancelled out and it certainly was preventable. With the 2nd one, communication in the defense was the problem. But to be honest, the final scoreline is not a bad one.

And it's 3 draws from 3. This was quite an even game and a draw was probably a fair result. Shots and chances were fairly even and so was the balance of play. Going into the match, I probably would've taken a draw but draws are getting annoying and I'll be trying to change these into wins. 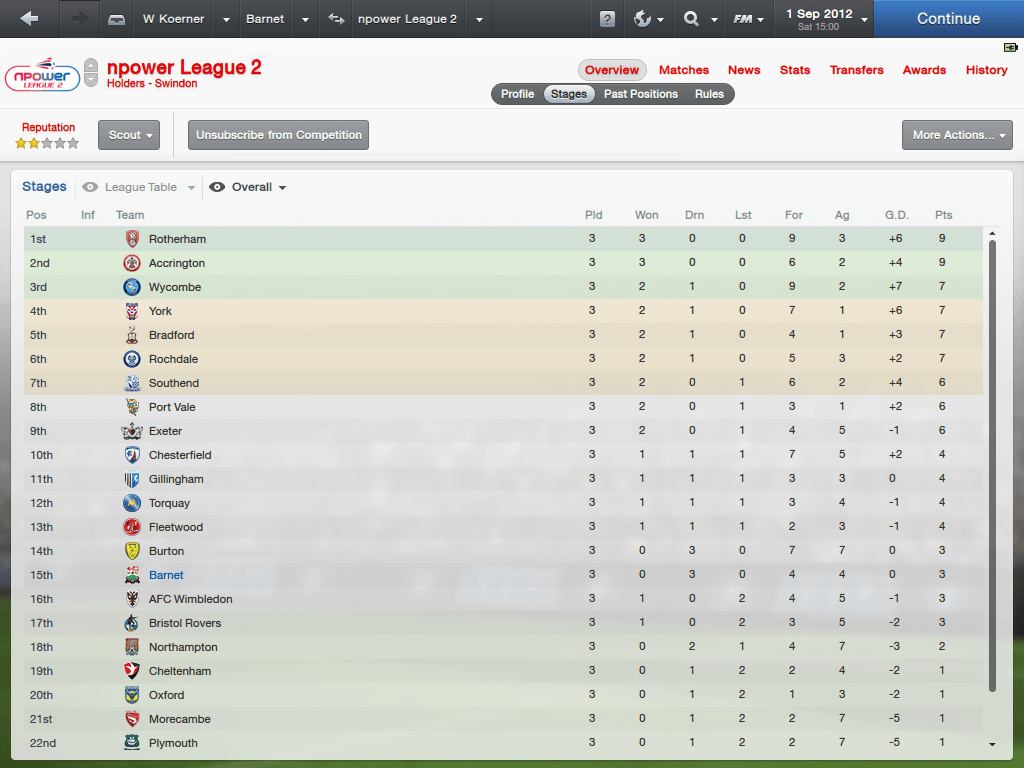 Dag & Red and Aldershot are cut off the bottom, both on 0 points.


Next Update: The first half of September.
Login to Quote

Moppy666
9 years
Thanks for commenting. The 4-1 was first match of the season and it was against Peterborough who are 2 divisions above us so I'll let that one slide. If they start becoming common occurrences then I'll consider changing tactics and having a stern word with the team.
Login to Quote

cincau
8 years
Hi there, I'm also using Barnet in FM13 wanted to try from lower league but how come most of your players stats are higher than mine example the likes of john osyter. Did you update any patches?
Login to Quote

You are reading "Barnet - Unprecedented Heights".