Search
On FM Scout you can chat about Football Manager in real time since 2011. Here are 10 reasons to join!
Home › Forums › FM SCOUT › FM Genie Scout

stortfordblue
9 years • Edited
Genie wouldn't re-load my game, previously i had found that if i changed screen in FM (say to my squad) it would load fine but this didn't work. I kept trying but then the error below came up. 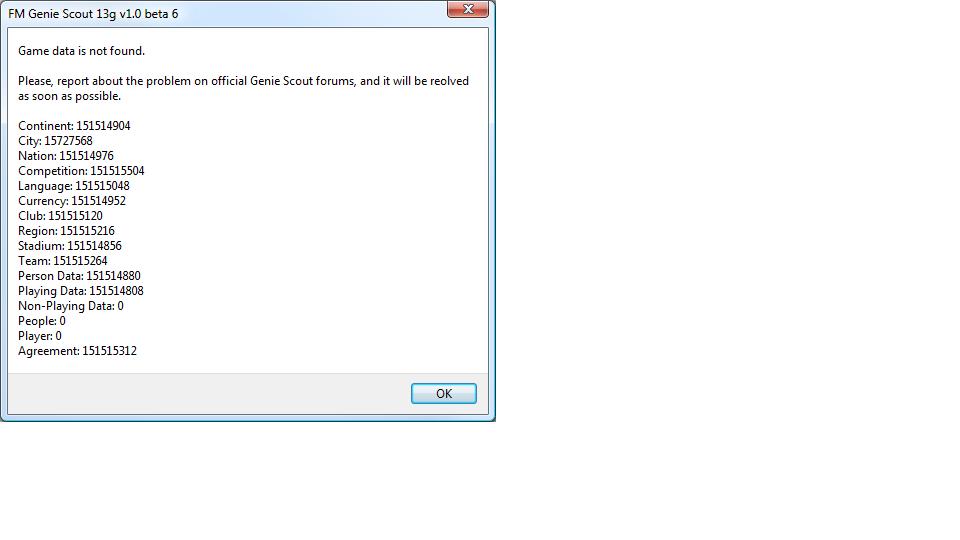 *Edit, Saved game is at http://www.sendspace.com/file/gjawx7
Login to Quote

RandydeB
9 years
can't find the problem for it, made a new save game with no database changes and 1 with and both load fine, untill a certain period and then both return the game data not found.

Any fix?
Login to Quote

mark2411
9 years
I'm getting the same error at the end of my first season. Tried reinstalling Genie, made no difference.
Login to Quote

Furrr
9 years
Got the same problem, with other numbers.
Genie doesn't work...
Login to Quote

Tyrion62
9 years
Same problem here.
I've sent my dump file a week ago but still no answer.
Login to Quote

Genie
9 years
I hope it will be fixed with the next beta.
Login to Quote

Tyrion62
9 years
I still have the exact same problem this morning with beta 7.
Login to Quote

Genie
9 years
I'm working on it, hopefully, it will be fixed in the next beta.
Login to Quote

You are reading "Game data is not found".