Paul09SM
9 years
Rangers have return to the top flight of Scottish Football after a 3 year absence.

Current manager Paul took the helm of club during one of its darkest spells. Paul easily lead the Gers to promotion in his first season in charge winning the scottish league challenge cup to boot. A diffecult challenge was in store for the 30 yr old former Youth level Centre Half as he started Div 2 under a transfer ban.

Paul turned punishment to pocket money as he signed a number of quality youths who dazled onlookers before moving on for a healthy profit. The higher profile players also moved on and Rangers made £8m in one season. the £4.5m banked for Lee Wallace quickly converted to help with wages. Midway through the season Paul made his first signing for a transfer fee. Ryan Gauld cost the club £275k but at 17 he had tremendous potential.

After winning promotion again started Div 1 with 6 players signed on precontract deals who all looked eager. Rangers had another record breaking season now holding highest points gained, goals scored, games won in a row, games without losing in all 3 divisions so far.

Looking forward to the SPL Rangers will now face Celtic in the league. Paul lost 4-0 in the only encounter in his first season. 1-0 in the only encounter in his second season. While in Div 1 Rangers lost on penalties in the league cup but thrashed the bhoys 3-0 and went on to win the Scottish cup. Now facing his first season in the SPL he also has a crack at the Eufa Cup. Having sold Ryan Gauld for £3.3m and David Petrucci for £2.1 Paul was able to sign a number of top class players after contracts ran out. Will Hughes joined winger Omar Elabdellaoui who signed last season. Jack Robinson, Scott Wooton and David Davis singed among other English joining the crusade. Die hards Ross Perry, Luca Gasparotto, Anestis Argyriou and Andy Little have been there from the start. Former players Jamie Ness and Gregg Wylde have returned. After confirming league expectation Paul was able to add Larnell Cole for £200k and Lucas Hradecki for £0. Can Rangers do 55 at their first attempt? Bookies odds TBC.
Login to Quote

The FM Rookie
9 years
Good luck with the story! 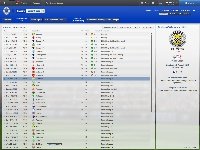 You are reading "Return of the Teddy Bears".